This is a quick project I decided to make over the past 6 or 7 days. I just finished it this afternoon, and I've been looking forward to sharing it on the blog. 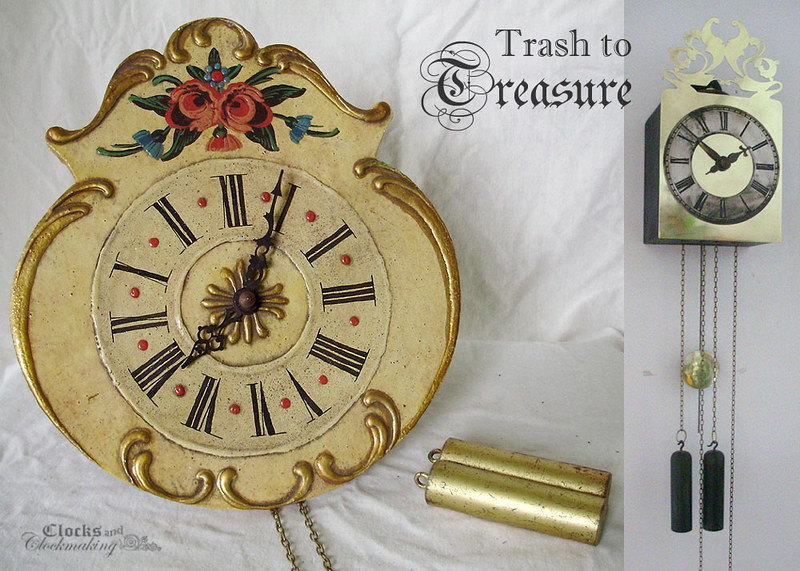 This clock was an ugly duckling from the junky clock haul in early 2015. I had it listed for sale at only 15$, with zero interest. After having worked on both Zaanse clocks recently, I noticed that this clock had the same kind of movement, also made by Hubert Herr. The bell was quite nice, and it was in working condition. The only problem was that it was hideous. This was a nice small movement that was perfect for converting into something better. 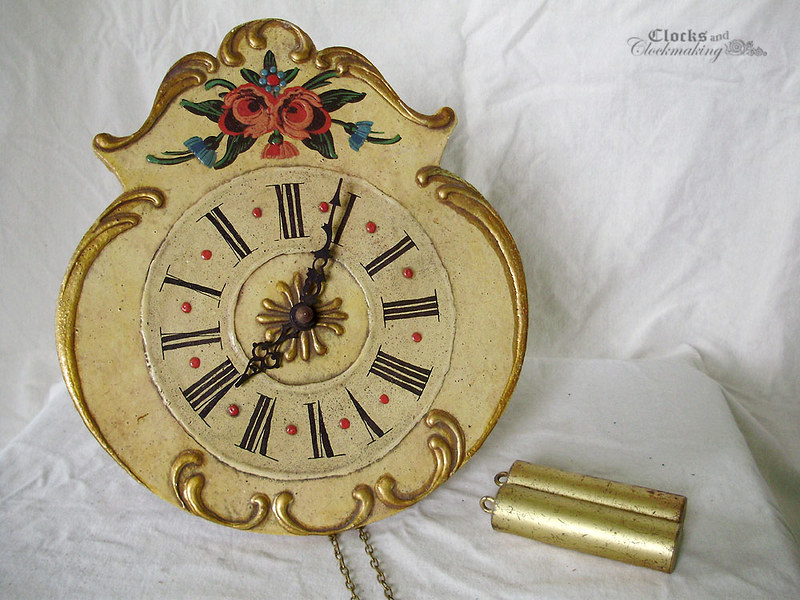 The movement is in excellent condition. 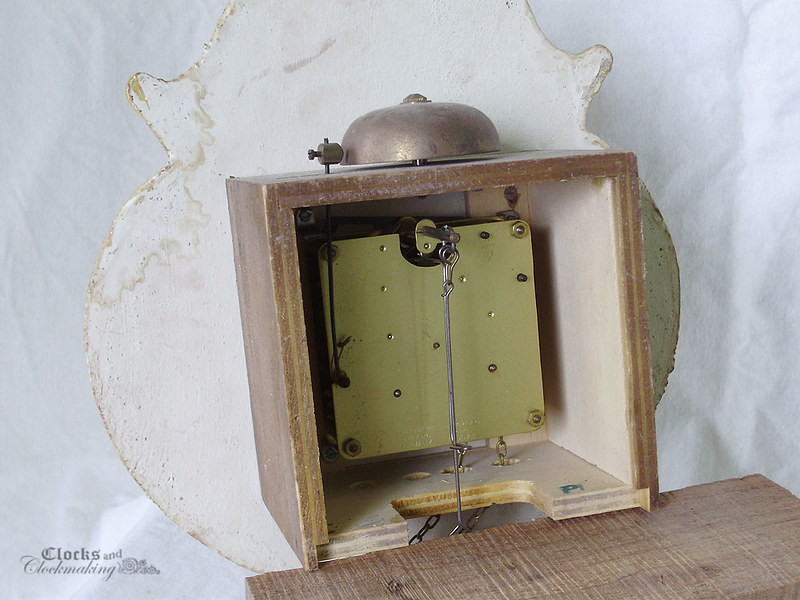 The inspiration for this clock is something I've had at the back of my mind for a few years already. I saw this clock years ago made by Simon Douta (dated 1762). It is a simple iron clock with a decorative brass front. More recently I've also really developed a love for comtoise clocks, which share some similarities with the Douta clock. The following collage shows 2 Simon Douta clocks, two early comtoise clocks, and an early painted Germanic chamber clock. These were the inspiration for the clock. 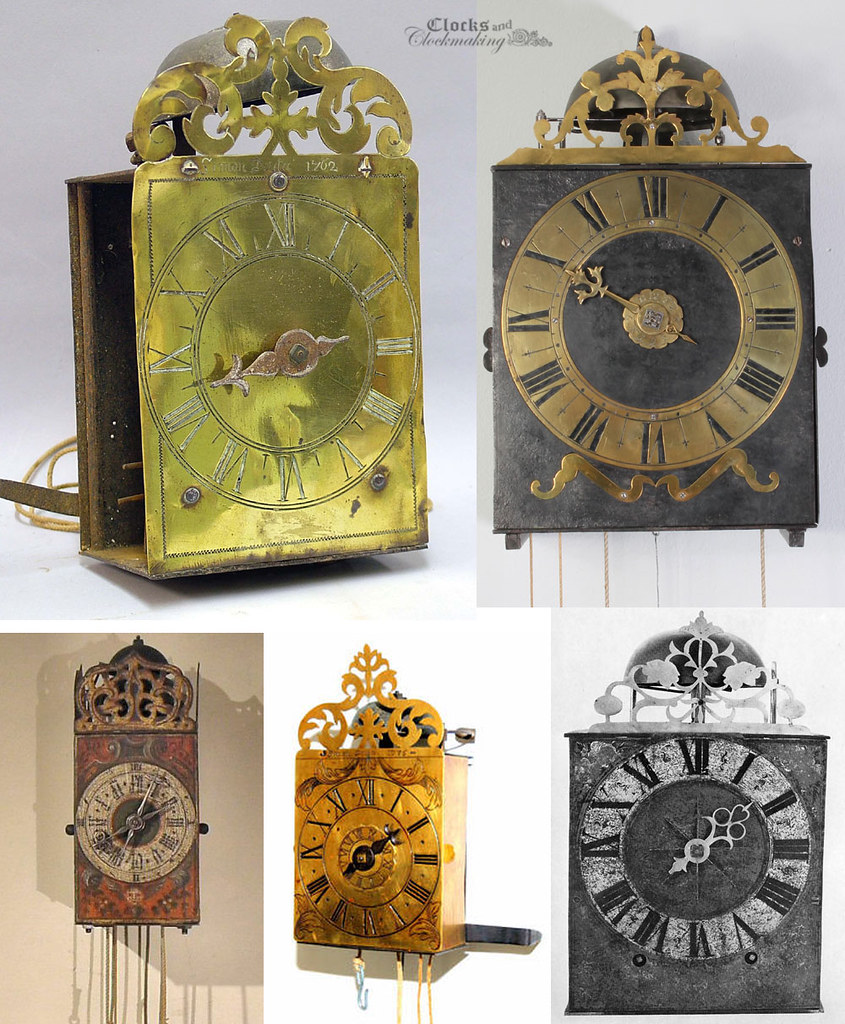 I had a wide assortment of options for lantern crests from some of my clock books, and these were 4 that I considered. For whatever reason, I really liked the one that was "for the Turkish market". 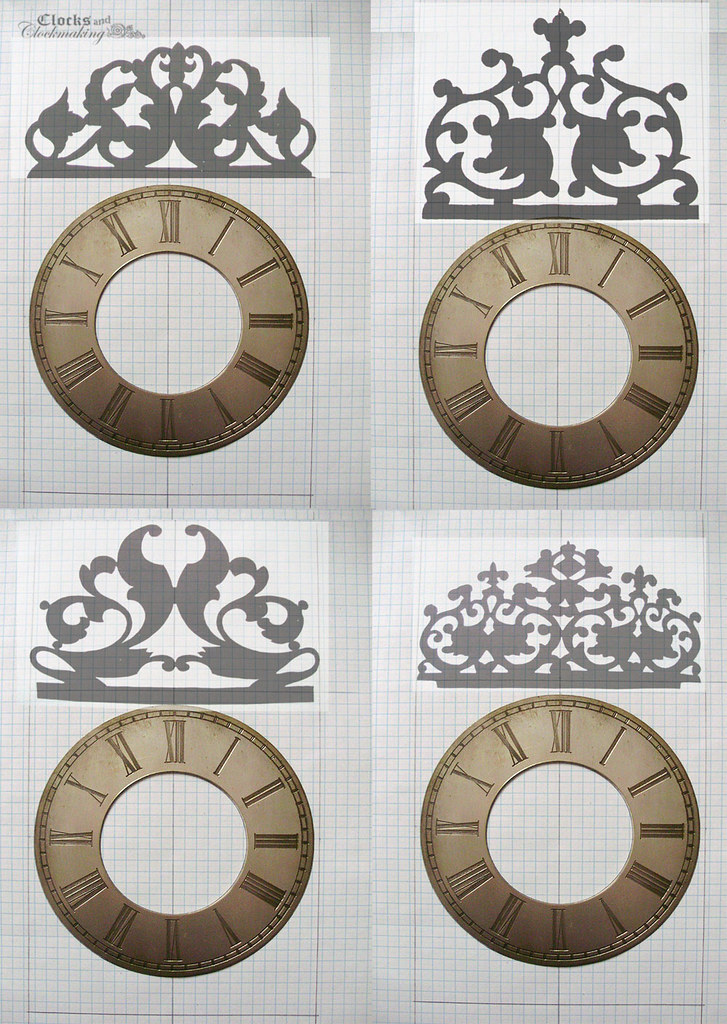 The dial I wanted to use was a donation from Jim Dubois (a clockmaker friend). This engraved dial was originally supposed to be for a tower clock, but it had a flaw on it where one side was engraved deeper than the other half, so he sent it to me as a sample showing silvering using silvering powder. The centre had 3 holes (a hole for the hands, and two screw holes), so I cut away the centre to make a small chapter ring.

With the chapter ring ready, a scale drawing/pattern was made life size. The overall size is 5" wide, and about 9" high. 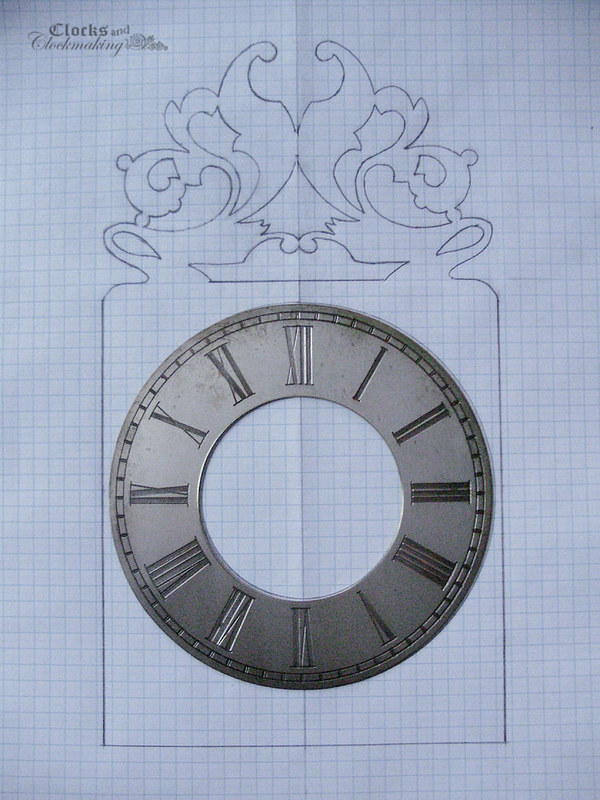 All the brass sheet that I used for this clock came from a door kick plate. This is thin brass, but still fairly hard and durable. I had bought two of these kick plates several years ago on clearance because they had a damaged corner. 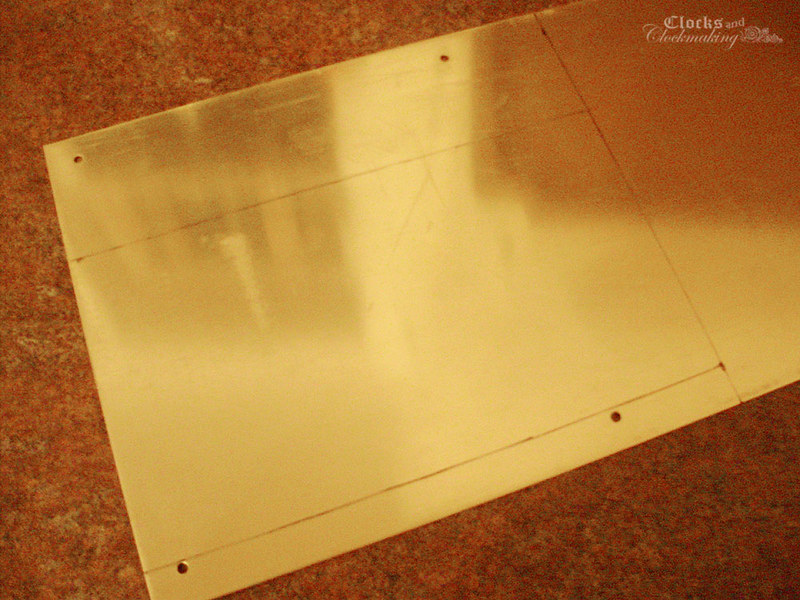 The plate was cut with a regular hack saw, and then hand filed along the edges. No fancy tools here. 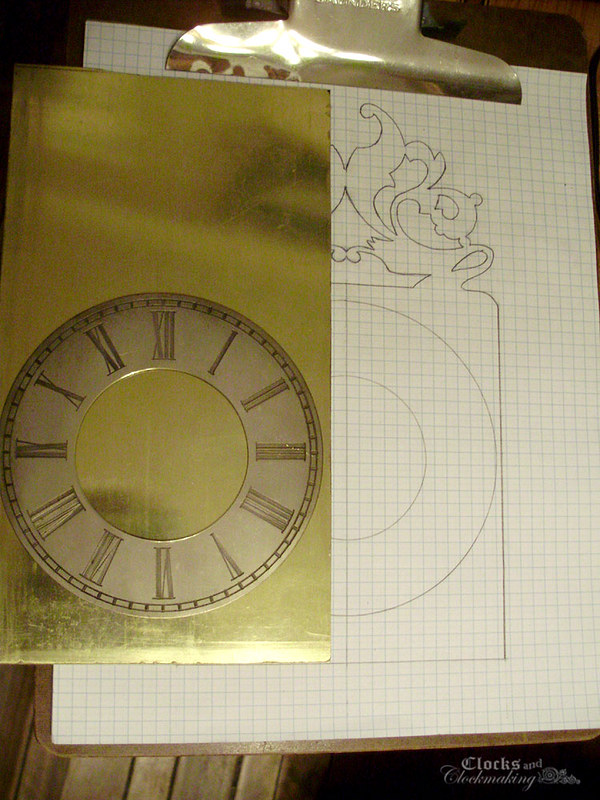 The bulk of the tracery was cut with a standard jeweler's saw, but for some of the deeper sections, I had to use another saw with a very deep frame. 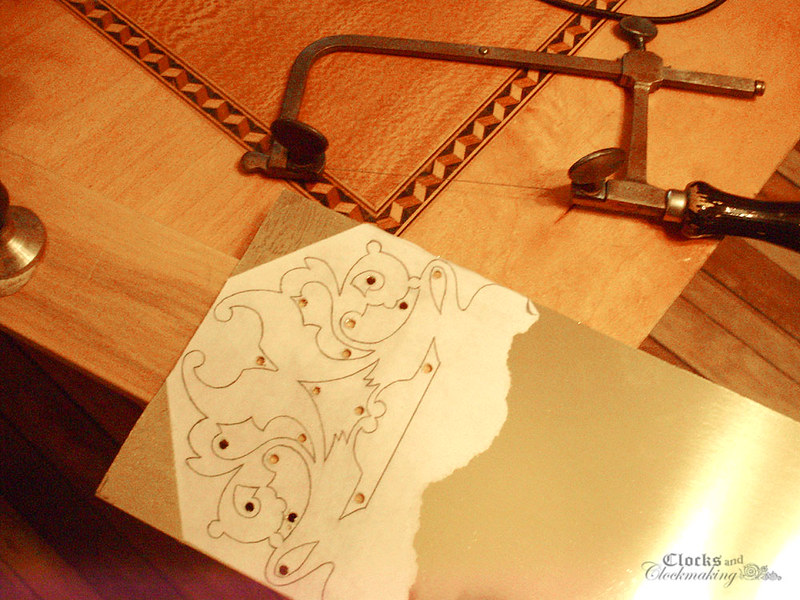 Rough cut. Note that this is not 100% perfect. The top centre has an especially bad screw up (two lines that don't meet), and I sawed into the design on the centre inner left leaf. Most of this was corrected by filing. 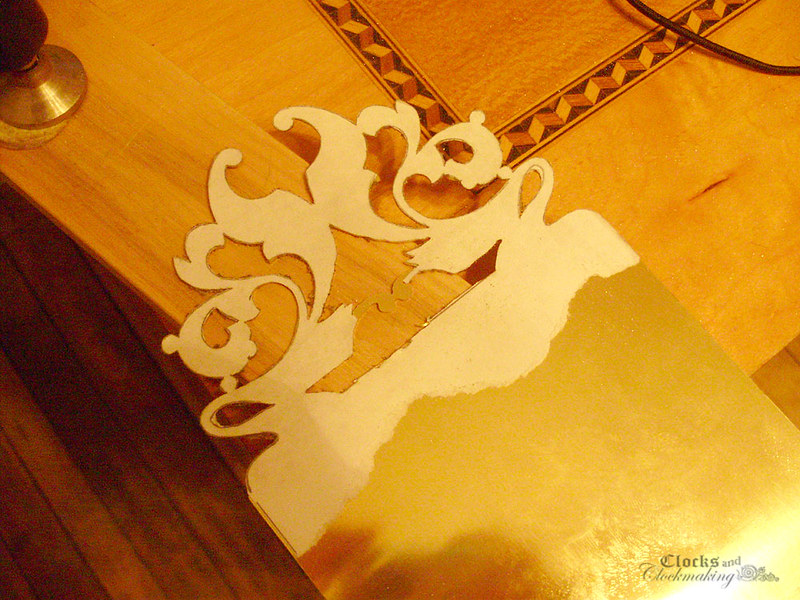 After filing. Note that I didn't correct the one saw mark into the leaf. I would have had to modify the shape too much, so I left it as-is. 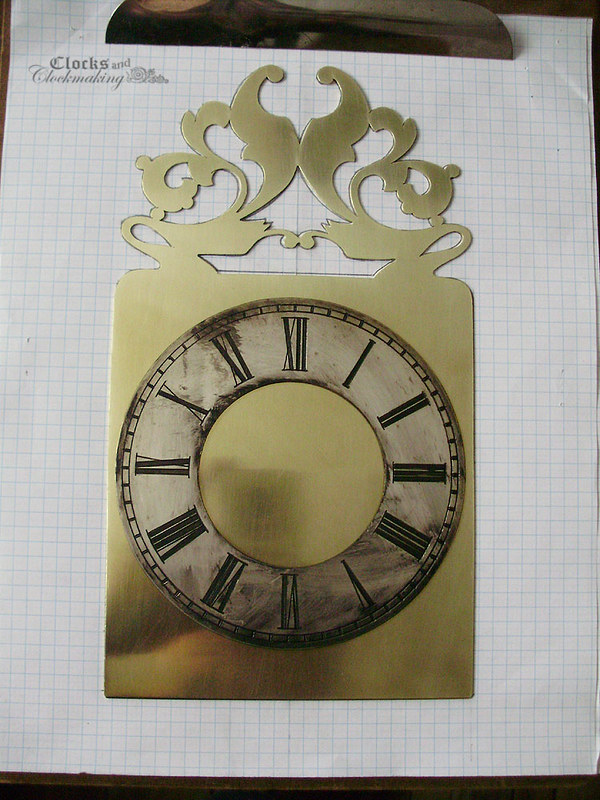 Also note the chapter ring. I did not want to do traditional wax filling, so I used oil paint. I had originally planned to sand the top back to fresh brass and re-silver it fresh, but after having quickly wiped away the excess paint, I kind of liked the old weathered look to it, so I've left it as is. This was a complete accident. 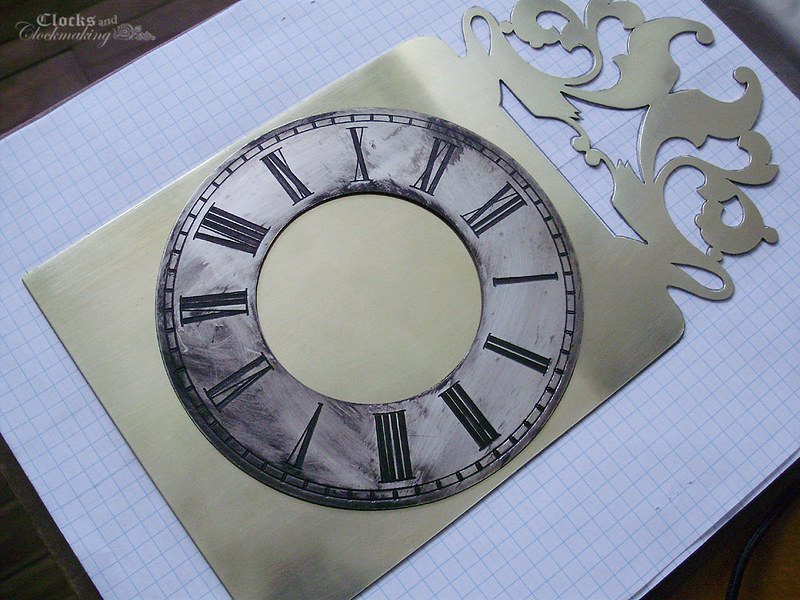 If I were a bit more lazy, I could have reused the old case, but I didn't like the plywood, and I wanted it to match the size of the dial. A new case was made from scraps of pine. The case matches wag-on-the-wall style German clocks. If I had a larger selection of sheet metal, I would have made a metal case and painted it gloss black (like a comtoise). 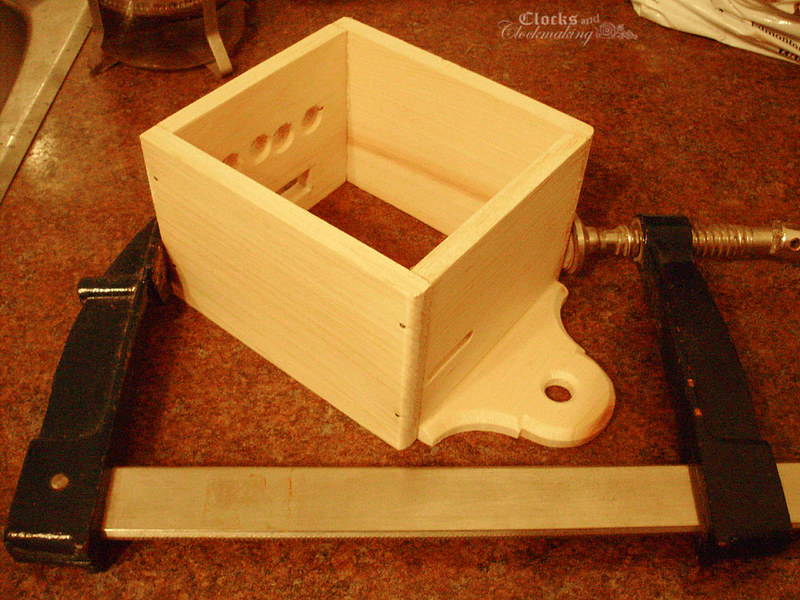 Movement mounted, dial affixed with two tiny screws (from inside), and centre hole drilled for hands. 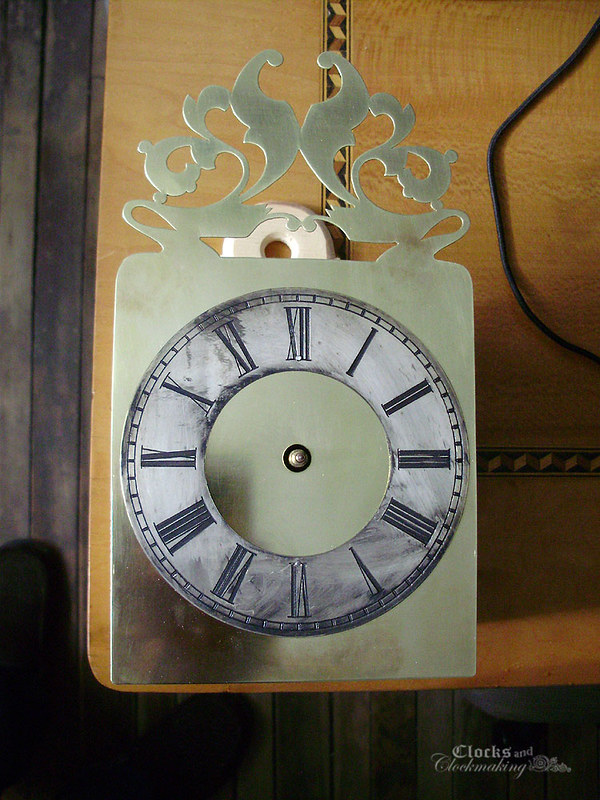 I had to make a new bell stand, because the thickness of the pine case did not match with the old one. The threaded rod wasn't long enough. Clock hung for testing. 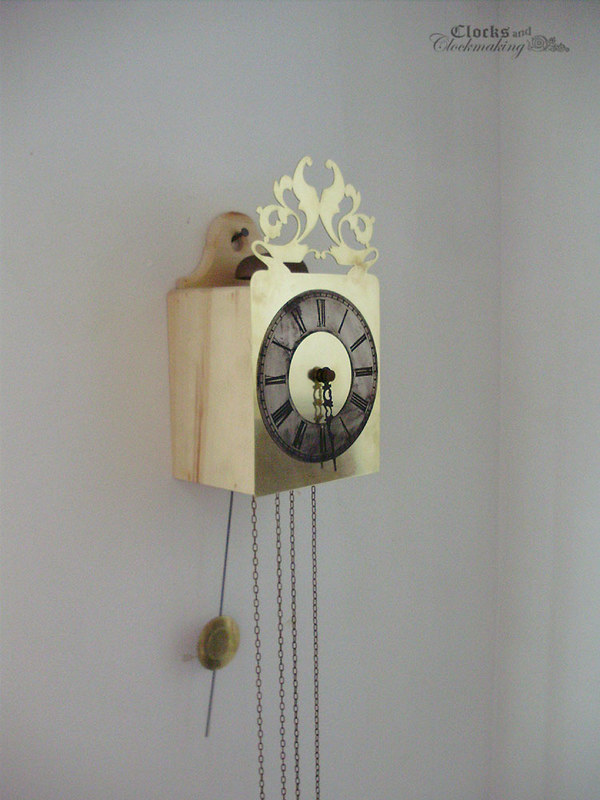 I liked the Douta hand, so I copied it for the hour hand. The pendulum above, and the hands, were made with the off-cut of the 9 inch brass sheet. For the bob, I mounted a square of brass in my universal face plate (in my watchmaker's lathe) and spun some circles into it. I then domed it by hammering the back side against a piece of pine until it had a nice gentle curve. The cupped sheet was then cut along the outer line and cleaned up with a file. To keep the bob in place, a smaller sized sheet metal circle was cut, and two thin slots were cut into it. This was also domed, and then soldered into place. The wire rod just slips through with a friction fit. The finished pendulum is seen farther down. 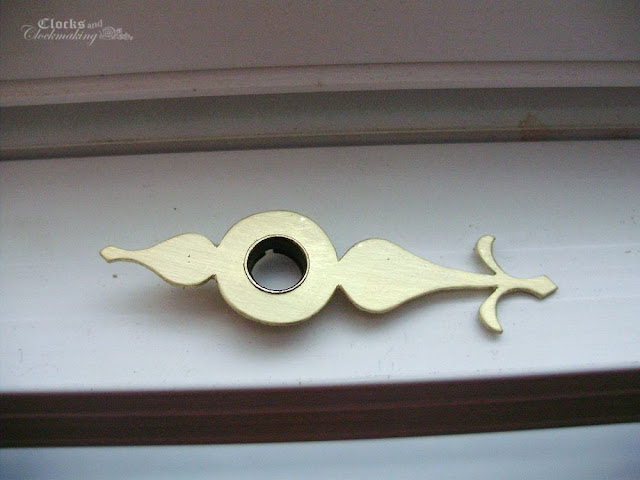 The brass hands were blackened and fitted. 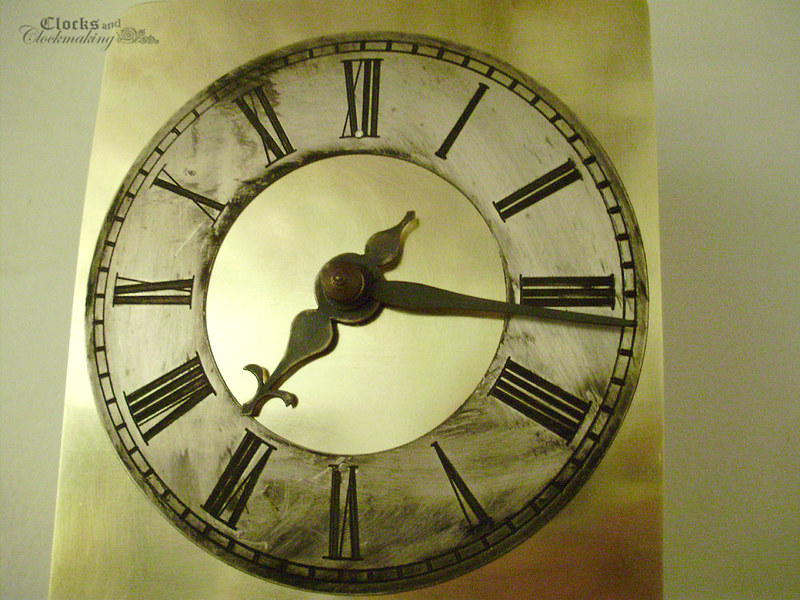 The brass front was also blackened for patina. This isn't necessary, but it's a detail I wanted to add. I blackened both the front and back (in order to get all the edges and for everything be even). Then just the front was polished back to a shine (not the edges or the back).

I had a bit of a hard time deciding how to attach the front to the case. Older clocks have either screws through the front, or slots and pins. I decided to use hidden brackets. The bottom one slides over a metal pin, and the top two are screwed down to the case top. 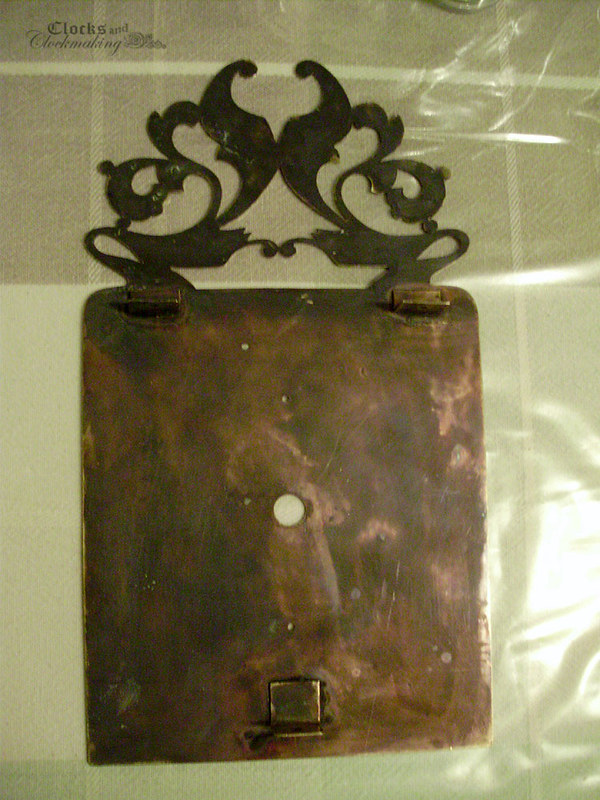 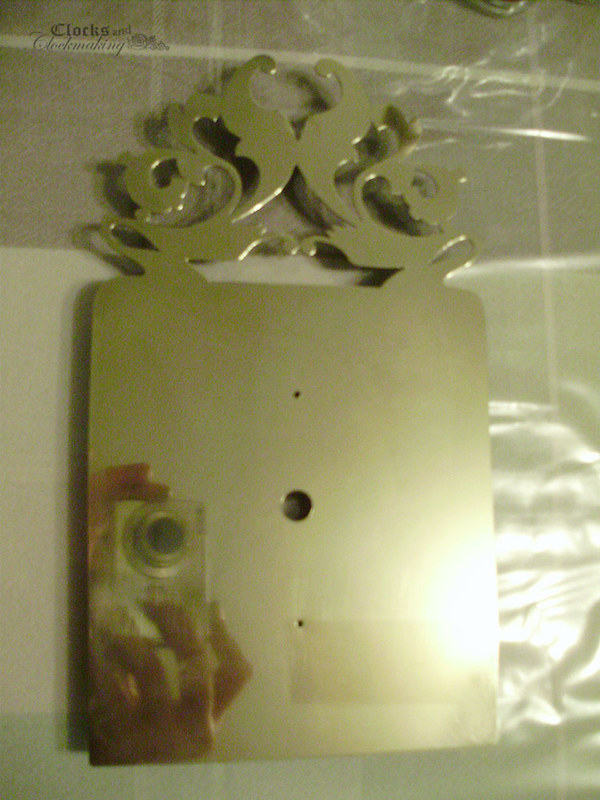 Here's the little pendulum bob. I debated between making a solid brass pear-shaped bob (crown wheel/verge style) and a small flat disc, but I'm happy I went with the disc. The bob was made by taking a square of sheet brass, engraving circle lines into it (on the lathe) and then dishing it by pounding the back side against a piece of pine with a large curved face hammer (a normal hammer). Once the dishing was adequate, it was cut freehand with a jeweler's saw, and the edge was cleaned up with a file. The back side has a similar circle of dished sheet metal, and this has two thin slots in it for the rod. The spacing was done to work with a friction fit. The rear disc was then soldered into place and antiqued. 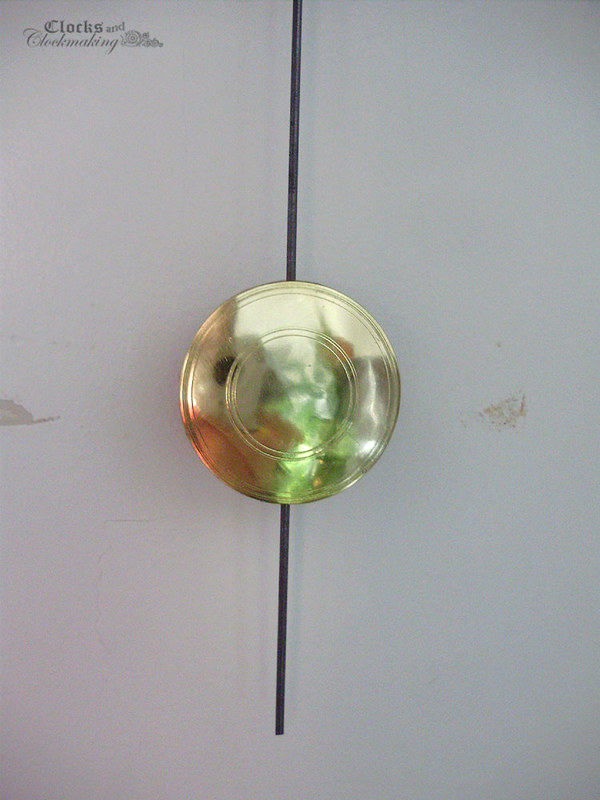 I left the patina on the bell, and I gave the case a dull black painted finish (semi-gloss). 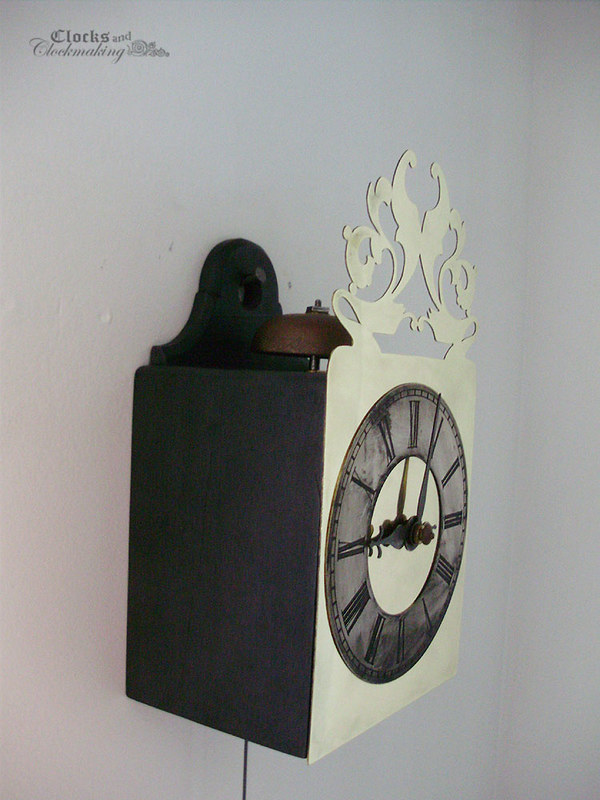 The weight were the hardest modification on this project. They are the originals, but I did not like the shape of them (see first photo). I removed the hooks, and rounded off the tops in the lathe. I then made new hooks, stripped off the paint, and added black patina to the steel. These are just 7/8" diameter steel rod, and they weigh just about 1 Lb each. They're about the same weight as pine cone cuckoo weights. 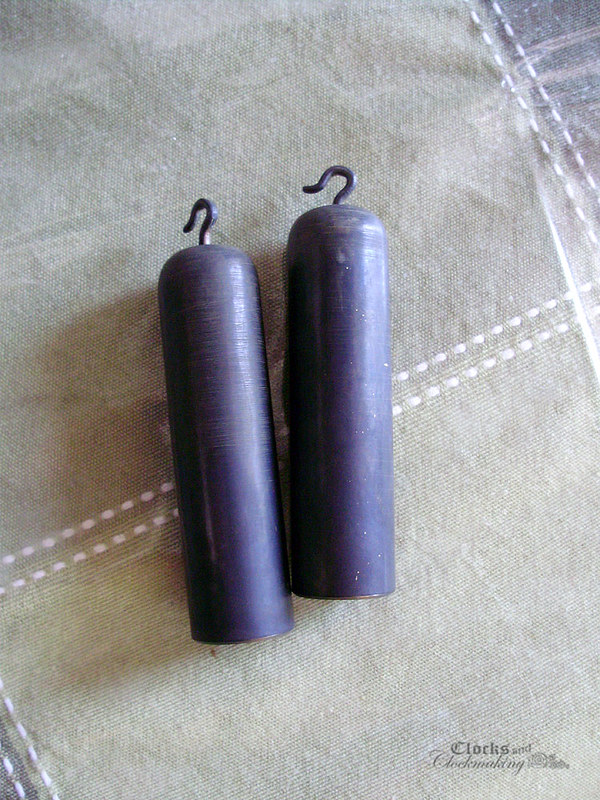 So after all this, the clock is finished and running. I do plan to take the movement apart and clean it, but it will also need the chains lengthened. The chains are a standard size, so I will add a length to my next parts order. 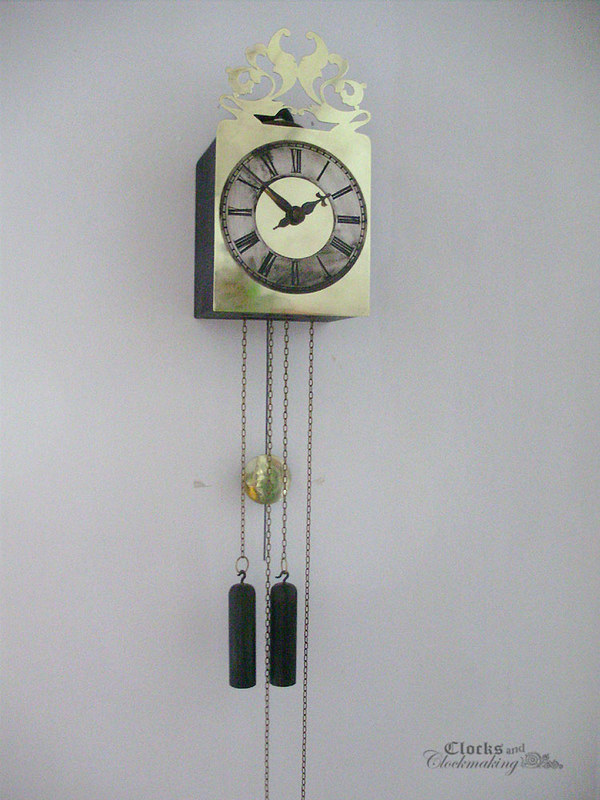 I made 4 new brass hoops. 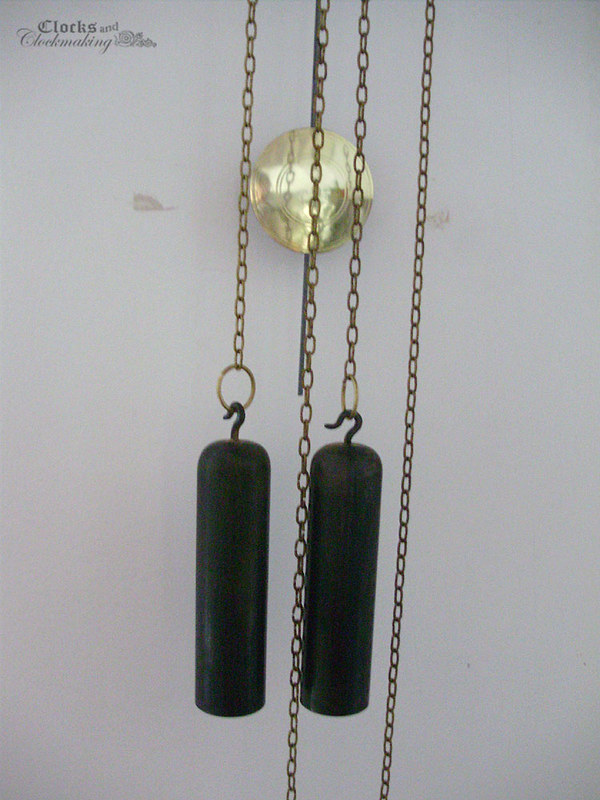 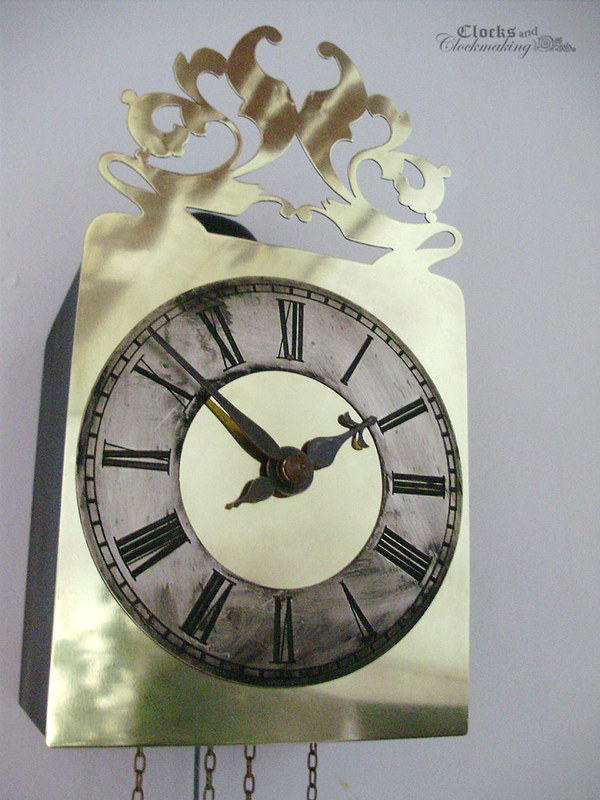 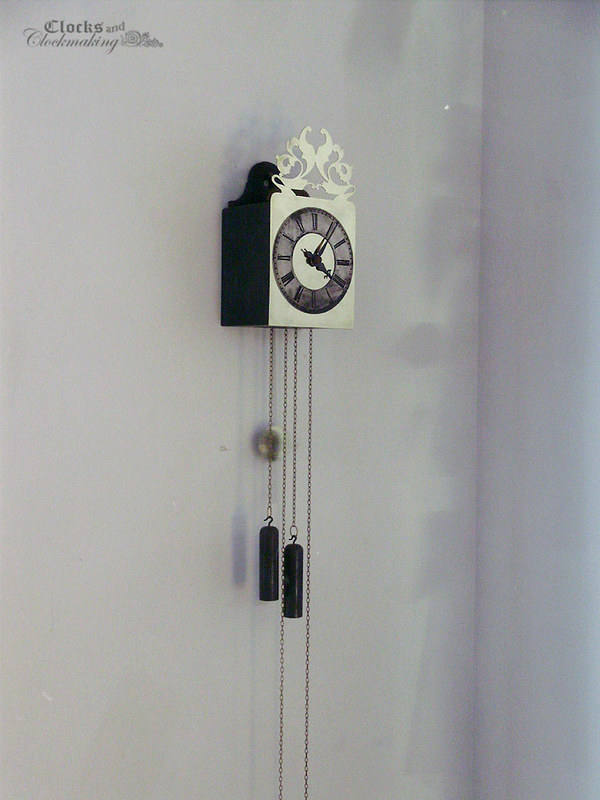 I hope that this post serves as inspiration for what you can make with just a few simple tools. The majority of the parts for this clock were made with just a jeweler's saw and files.
Posted by JC at 3:36 PM