I have had the dial and hands for the clock finished for quite a while, and I even have the photos ready to post, but I've been procrastinating. Since I had the afternoon free, I thought today would be a good day to tackle these two posts.

As you may know, this is an ongoing series on my clock blog, where I am attempting to put together a Knibb style ebony longcase clock (reproduction) using spare and orphaned parts, along with new/replacement ones.

Before getting into the details about making the dial, there's an additional photo that I didn't know where to include. When I was restoring this movement, it was evident that it had gone through MANY repairs over the past century or so. The movement had about a half dozen or more added holes in the plates. Some are a complete mystery. On the backplate photo below, you can see what appears to be a pair of holes for a bell stand on the left. I have no idea if the original bell stand was on the left, or if the original location was on the right, and a different bell stand was installed in new holes later (or vice versa). There was also another hole behind the current (new) bell stand. Regardless, the larger hole to the upper left had been plugged previously, but not the smaller pin locator hole below. Additionally, the bridge has been moved, and the old holes had been left (on the bridge and in the plate), so I plugged those as well. There are 4 small holes (two per plate) on the top and bottom centre edge, and these are normal to find; they are alignment pins from the original construction of the movement. I left those alone. 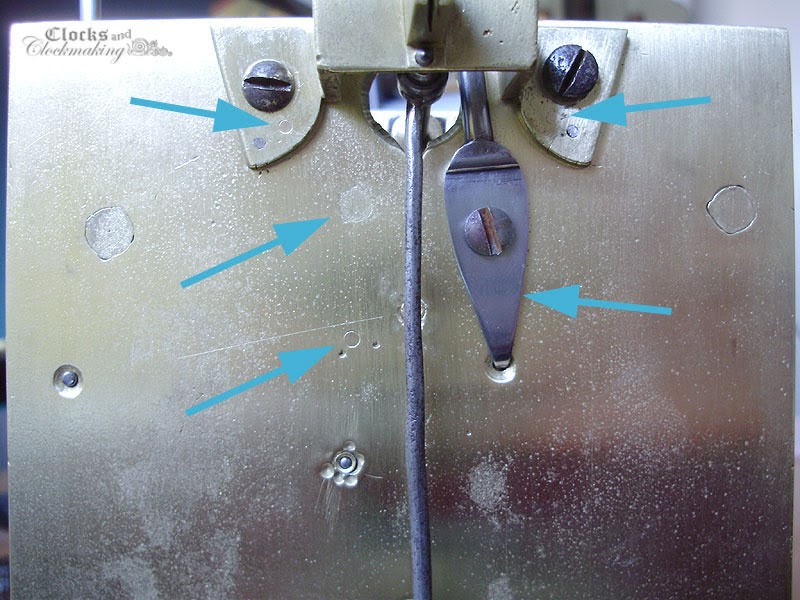 I will also need to address all the mismatched screws on this movement. It would seem that most of the screws (including the motion works bridge screws on the front) are mis-matched, and no two seem the same. A few also have different threading, which makes it a pain to keep track. I don't love the idea of having to hand-make an entirely new set of screws, but I would prefer that they all match, especially since this will ultimately (and hopefully) be a rather nice clock with a somewhat rare movement.

Fitting a new dial might seem both easy, and complicated. In truth, it's a mix of both. It's easy because you get to custom fit the dial exactly how you like, and it's difficult because you have to be quite precise and careful.

The materials you will need for a traditional brass dial are as follows:

Cut a square sheet of brass. This is quite simple and straightforward to do, and I simply used a hacksaw and files. The size will depend on the type of clock or the type of dial you need, OR on the chapter ring you are using. *The thickness of the dial sheet you want to use is largely left to preference. Some old dials had paper thin brass sheets, while some are nearly 1/16" thick and weigh several pounds. My dial plate was cut from 0.035" sheet (0.95mm).

The Knibb clock I'd like to copy is from around 1680-1690. Most clocks from this early period had 10 inch dials. One of the chapter rings I had on hand (a gift from my friend and mentor Jim Dubois) is from an early American longcase clock, probably from the mid-to-late 1700s (maybe 1760s). It does NOT match the style or layout of a 1680s clock because of the large Arabic numerals on the rim, but it is just over 9 inches wide, and perfectly suited for a 10 inch dial plate. It is very unusual for such a late clock to have such a small dial. Normally dials increased to about 11 inches as early as 1700-1705, with most dials growing to 12 inches or more by the mid 1700s.

Another nice feature of the salvaged chapter ring is that it is umarked (no maker's signature). This is especially nice for pairing with an anonymous movement. Early dials typically had the signature on the dial plate edge, or on a circular boss in an arch above the dial. 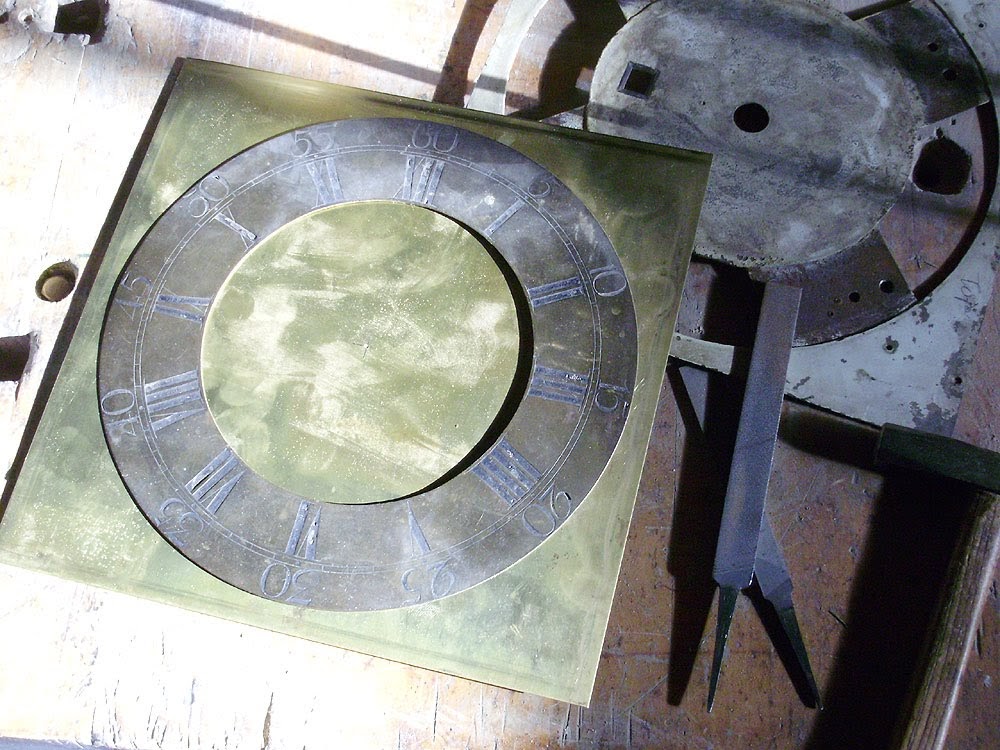 In the photo above, you can see the original dial plate for the engraved chapter ring. It was a pretty crude "cartwheel" style dial with a calendar opening. Someone had painted the sheet white at one point.

The hardest thing to find for a replacement dial will be the engraved chapter ring. As noted in the parts list, there are other options available. You can create one with the use of a CNC, or by electrolytic engraving. I have also occasionally found spare (orphaned) chapter rings and dial parts on eBay. I have a very beautiful one likely from a single hand country longcase, also for a 10 inch dial. Unfortunately that one has a signature, but the price was right.

If you're looking for a hand-engraved custom dial, you will need to do some searching. There are a lot of engravers still around, but the ones specializing in clock dials have largely disappeared. Be prepared to pay a premium for hand engraved work. A dial ring (about 10 years ago) was priced at at least 300$.

Dial feet can be purchased, but the size and quality may not be as great as what you expect. I made simple rod feet for this dial. Nicer feet would have a nice cup flange against the back of the dial plate, but I don't have the lathe tooling for this kind of work. Since each dial foot hole on my clock plate was a slightly different size, I had to make each post a custom fit. This was a bit annoying, and the fit doesn't necessarily need to be that precise. 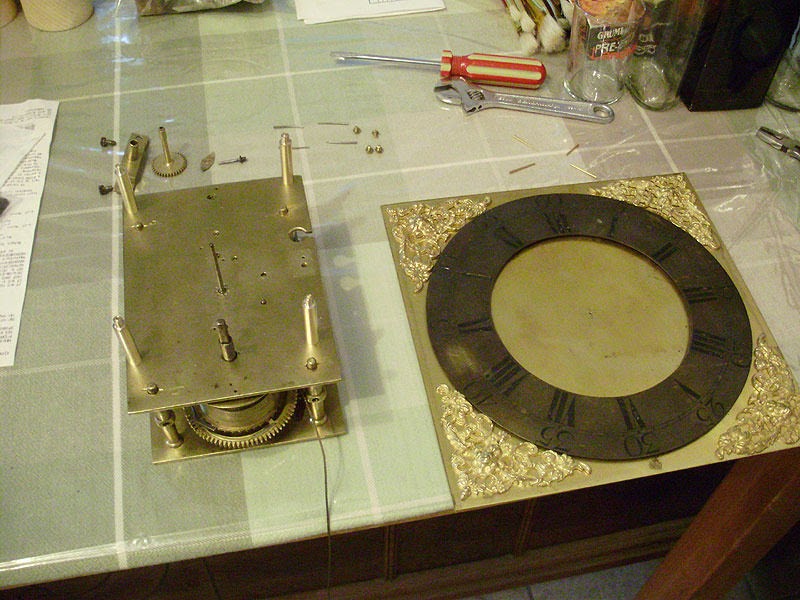 You will want the end of the foot to have a rounded profile (or a triangular point), and you want to make sure that the end is long enough to pass through the plate with a minimum of about 1/8" protruding inside the movement (for the taper pin). You also want to have a decent amount of brass stem protruding from the top for riveting to the dial plate. 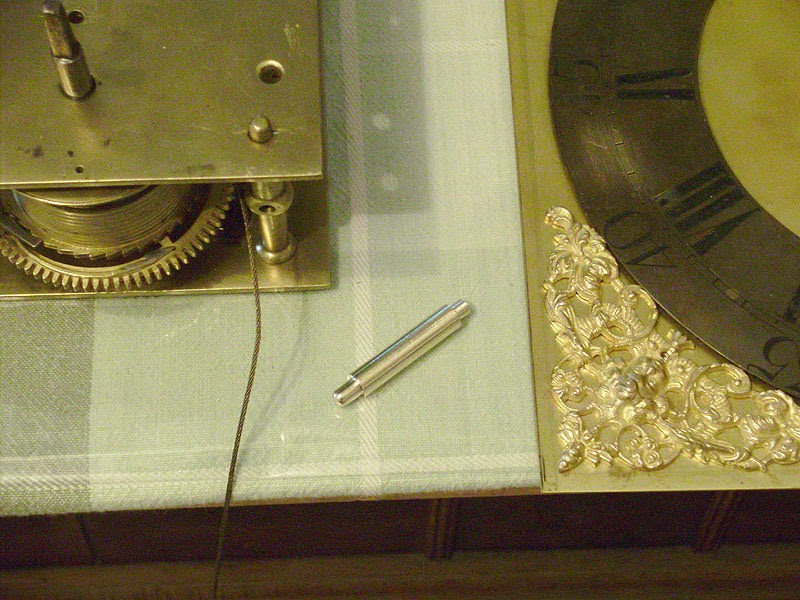 Locating the position of the holes is a tricky operation. You need to ensure that the hands will be perfectly centered on the dial plate. One way to mark the pillar positions is to mark the dial centre on the back of the dial plate, then use the front plate of the movement (with all the posts and sundries removed) and transfer the locations to the back. I believe this is how I did mine (it's been months so I don't remember exactly).

Once ALL the holes are drilled (including the holes for the chapter ring and spandrels, give the pillar holes a light chamfer on the front (top), and rivet them in place. 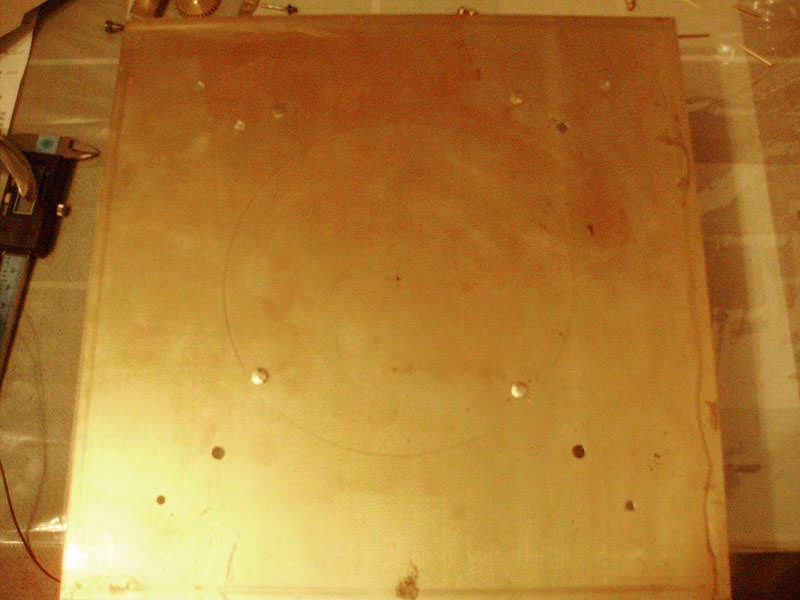 This shows one of the riveted pillars up close. 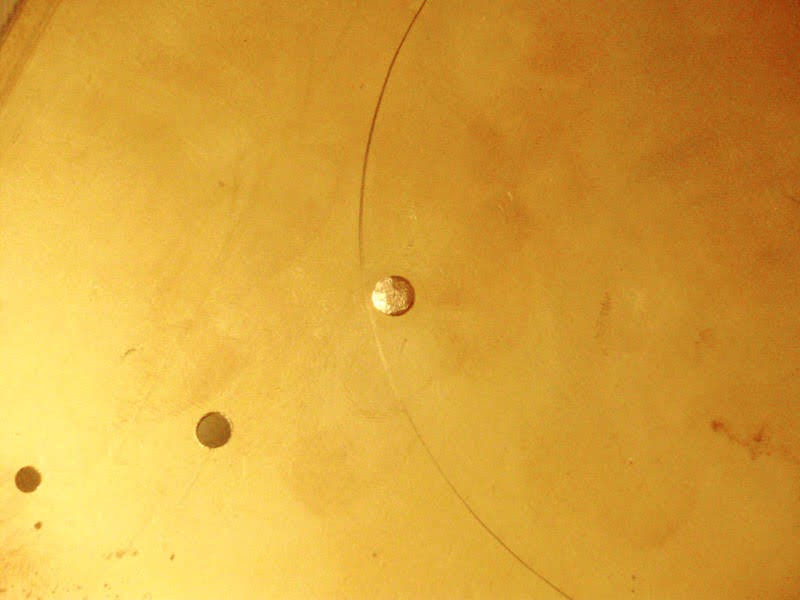 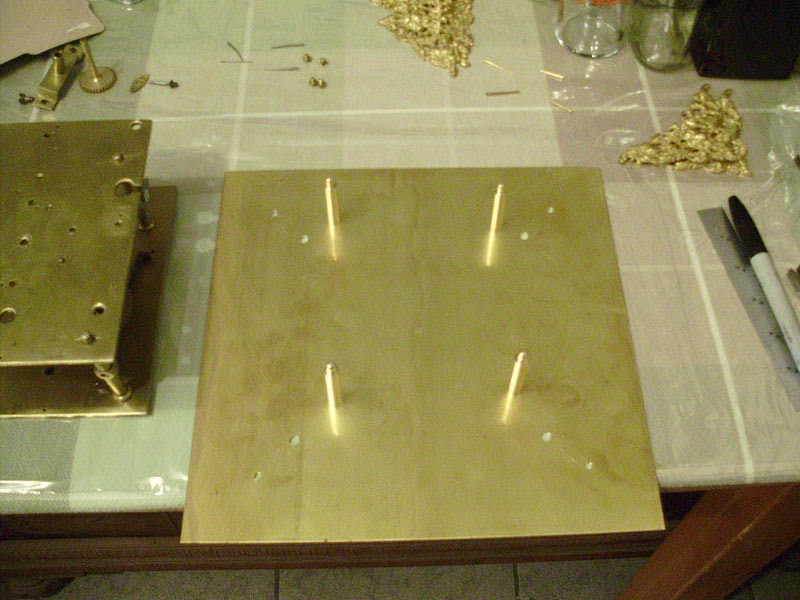 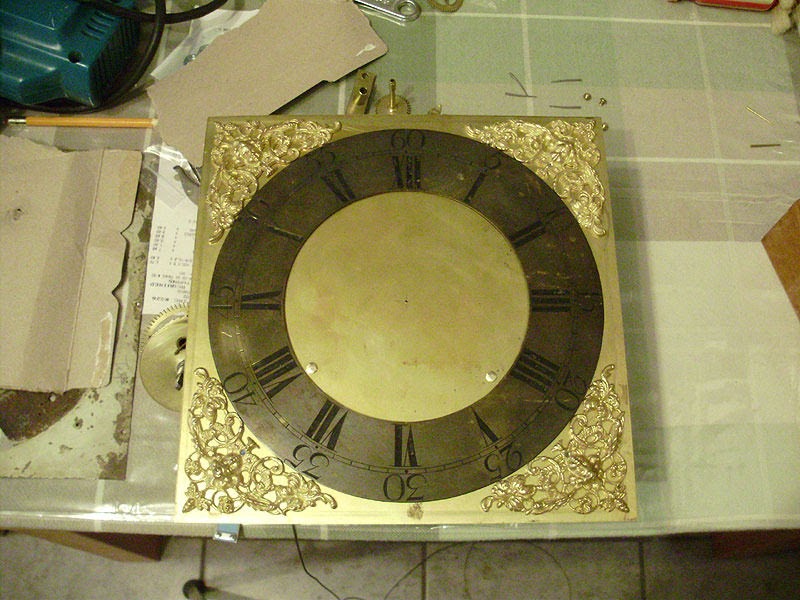 To attach the spandrels (which I glossed-over) they will need to be drilled and tapped for a machine screw or a spandrel bolt. Spandrel bolts are simply machine screws with a squared head. The typical location for the hole in the casting is below the cherub's heads (on this pattern). A lot of old longcase clocks use steel screws, but I chose brass so that the screws don't show as much in the spandrels. The spandrels are then screwed in place from the back. In the photo above, the screws are not in the spandrels, and you can see them on the table.

In many longcase dials, some of the dial feet will be within the centre field of the dial. This is usually due to clearance issues, but in this particular case, there is no reason why the two lower dial feet couldn't have been positioned lower on the front plate. If you go back and look above, you will also see that the dial pillars are all randomly spaced on the front plate. The upper right one is near the edge of the plate, and the lower left one is higher and farther to the left than the other pillar. I have no idea why the pillars weren't equally spaced. This is a time only movement with no obstructions anywhere near the edges of the plates. What likely happened here is that the maker had a pattern already in use for a standard 8 day movement, and the pillars normally had to be in those locations.

Anyhow, because some of the pillars land within the centre, they need to be filed and smoothed flat. A simple way to get the bulk down flat is to punch a hole in plastic sheet, and rub a file over the rivet until you start to file through the plastic. This will protect most of the plate (which you don't want to scratch, especially along the edges). 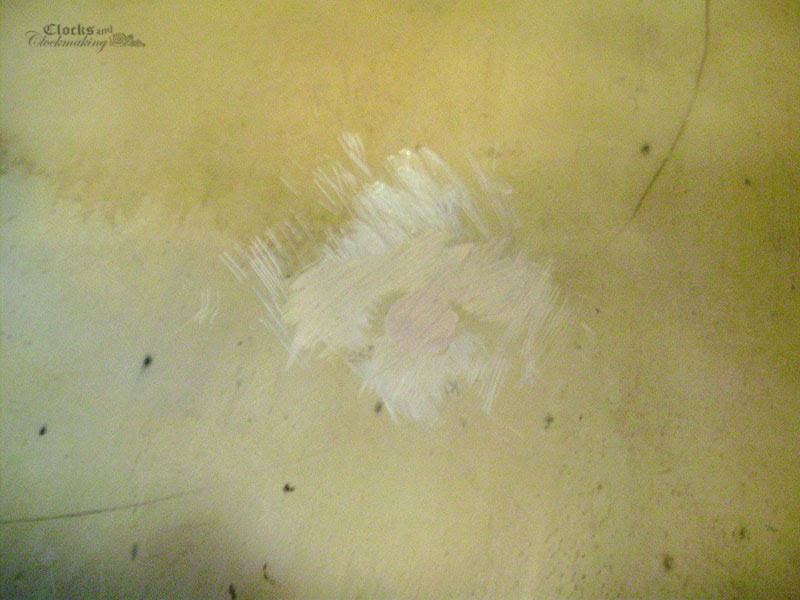 Finish the filing as carefully as you can. You don't need to be extremely precise because the centre will be matted. 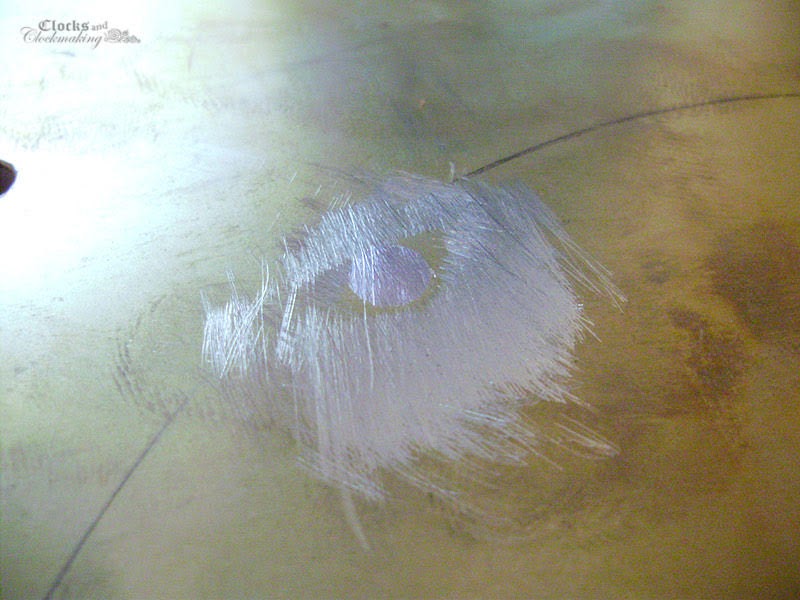 Traditional dials are frosted in the centre with specialty tools such as a "frosting punch" or roller. This is a tool that is not easy to find or replicate. I had made a previous dial using a stack of hacksaw blades: 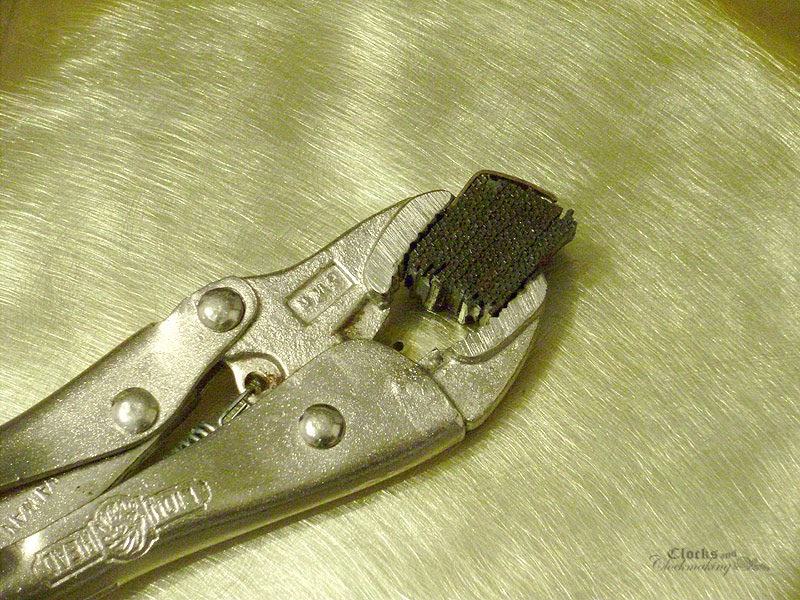 This is used in combination with a hammer. The matting must be done over a hard surface with the dial clamped flat. This is to avoid deforming the brass (as much as possible). If you're too aggressive, the dial will dish. You will also note that I started by going over the dial centre first with sand paper to get a scratchy "matte" base.

I had used a spruce 2x8 here, but this was NOT adequate (too soft) and I got some dishing on my dial. 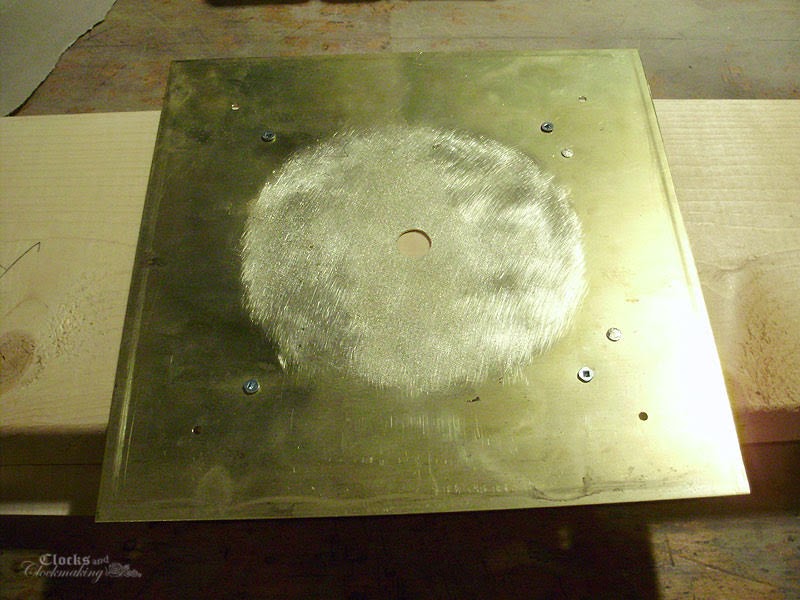 I didn't take any photos of this step. I thought I had already posted a tutorial on the subject, but apparently not. Instead I will deffer you to this tutorial:
http://www.davewestclocks.co.uk/silvering_clock_dials.htm 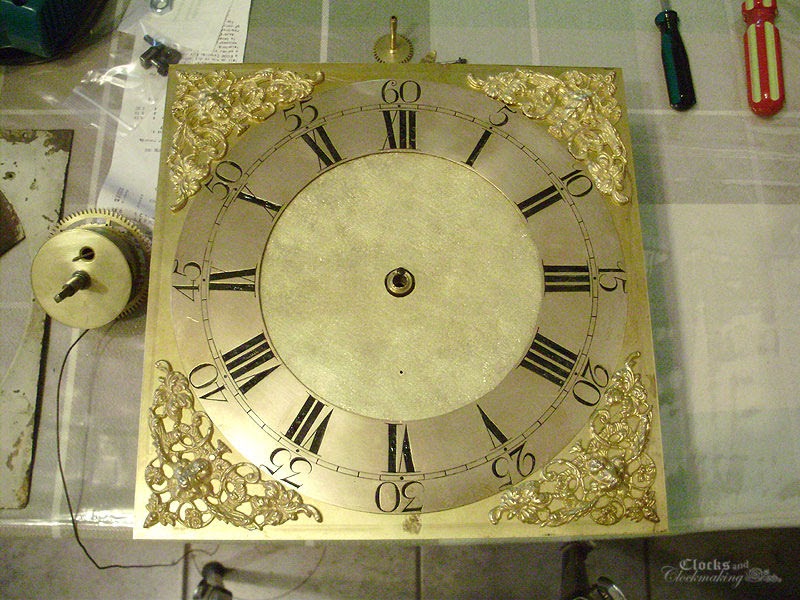 For the centre hole, you will want to cut it undersized and file it to enlarge it. You want about 1/16" or less around the perimeter. Same for the winding-square hole(s).

At this point I wasn't too happy with the matting. I had done this same matting on another dial and liked the look, but it's possible this brass was a bit harder. I decided to try an electric engraving tool to see what it might look like. Here you can see a small spot done with the electric engraver tool. 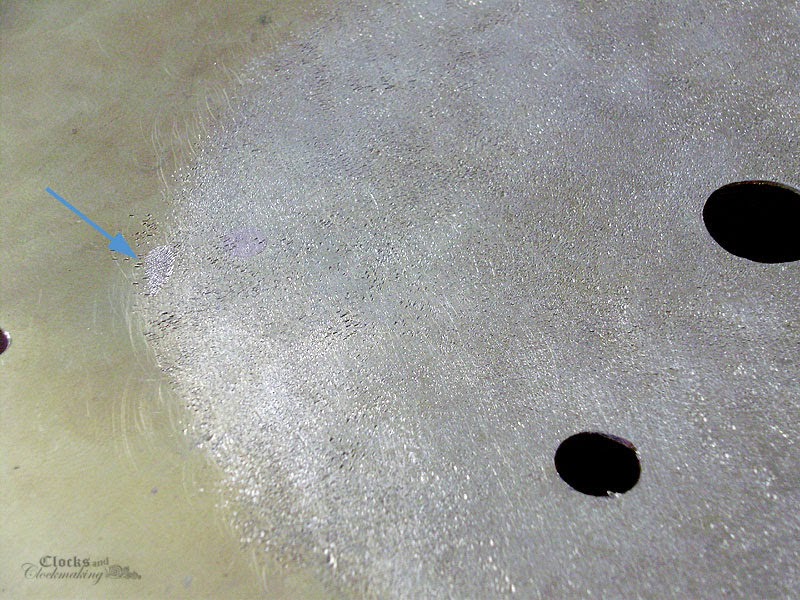 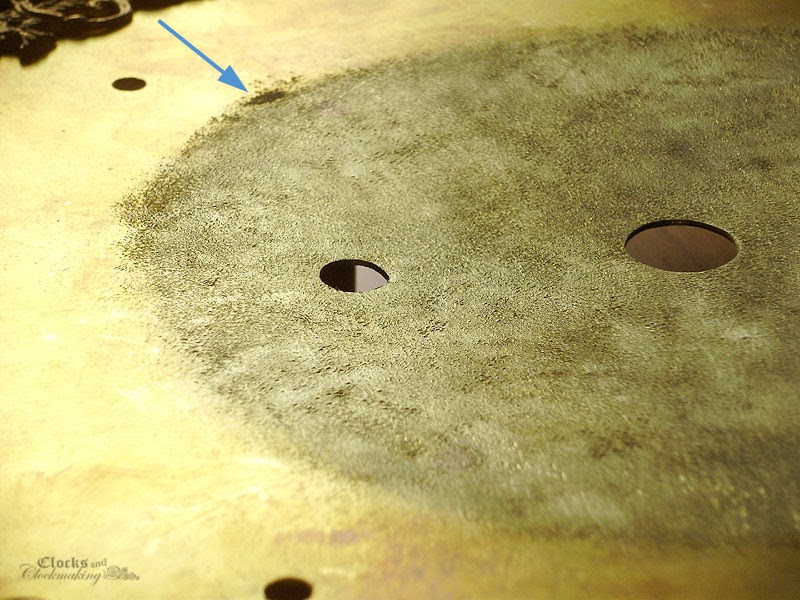 I decided to do the whole dial with the engraver. I did not, however, go about it in the best way. I intended to do it in sections, and go over it in a criss-cross fashion. The effect left way too much of a striped effect. 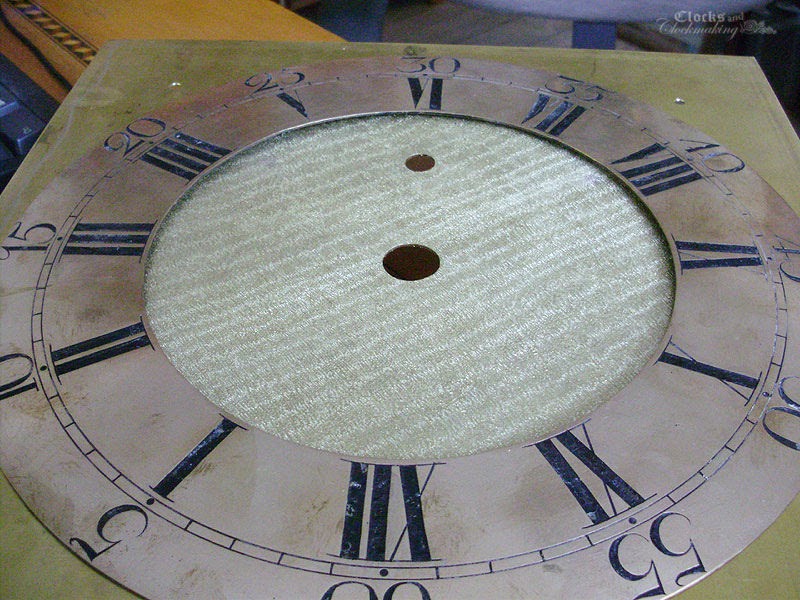 I can't even tell you how much time I spent on this. In the end, I had to go over the entire thing in random squiggles in all directions. I'm still not entirely thrilled with it, but it looks better than the frosting punch (hacksaw) method above. It is VERY time consuming either way. Another option is sand blasting, which gives a pretty good effect depending what blasting material is used. 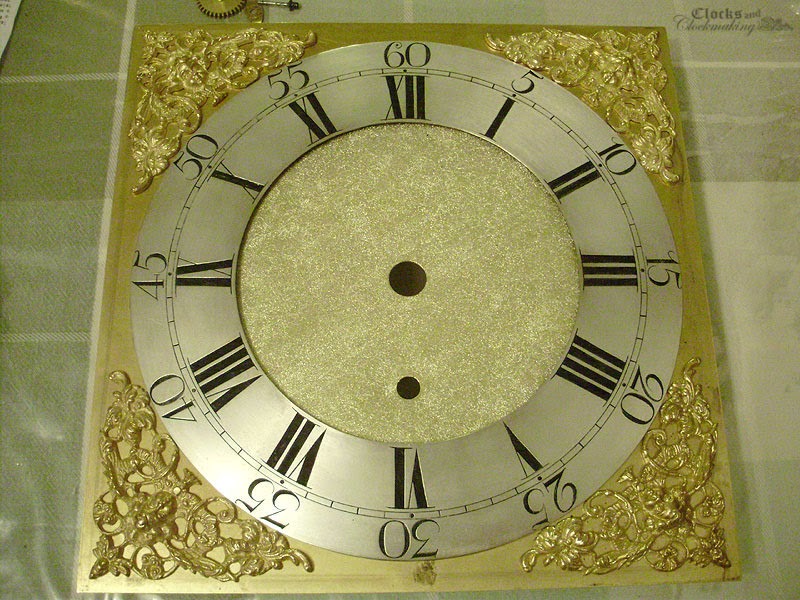 Once you're all done, a light chamfer can be added around the winding-square hole, and the entire dial plate can be polished (including over the matting). I had not done this yet in the photo above. You can still see a spot at the 6 o'clock position, and below the upper right spandrel.

Cutting the longcase hands will be in its own separate entry (coming up next).
Posted by JC at 12:59 PM