It's not often that I get to work on two nearly identical clocks from the same client and at the same time. One of my newer clients, however, pulled these two Zaanse clocks (also known as Zaandam clocks) out of storage for me to repair.

The larger one had the top ornamental casting torn loose, and both had rather scuffed-up cases. Aside from some touch-ups, they mainly just needed regular servicing.

This is the first time I work on one of these clocks, and because they are so mass produced (and not significantly old) it's doubtful that I will ever buy one, so I thought I would share photos of them. I remember many years ago almost buying one from a yard sale, however the man wanted 125$ for it. I was a teen at the time, so 125$ was a lot of money, so I passed on it. It looked more like the second clock (farther down), but I think it was even smaller than both of these.

Both of these clocks date to around the 1970s.

While both clocks are very similar, I think this is my favourite of the two. It's a little larger, and has more of a square front. The scalloped edge on the back is also a bit better defined. This one is by FHS (Hermle) Germany. It has an 8 Day movement with teardrop weights. The pendulum is suspended from a standard style suspension spring on a leader (on a post off the back of the movement). The movement is bolted through the base (like a longcase clock). The side lights are a dark brown art glass. This clock has a back wooden panel. The front veneer is bird's eye maple. Dial backing is just painted black. Dial is roughly 5.25", and the clock is 24" overall. 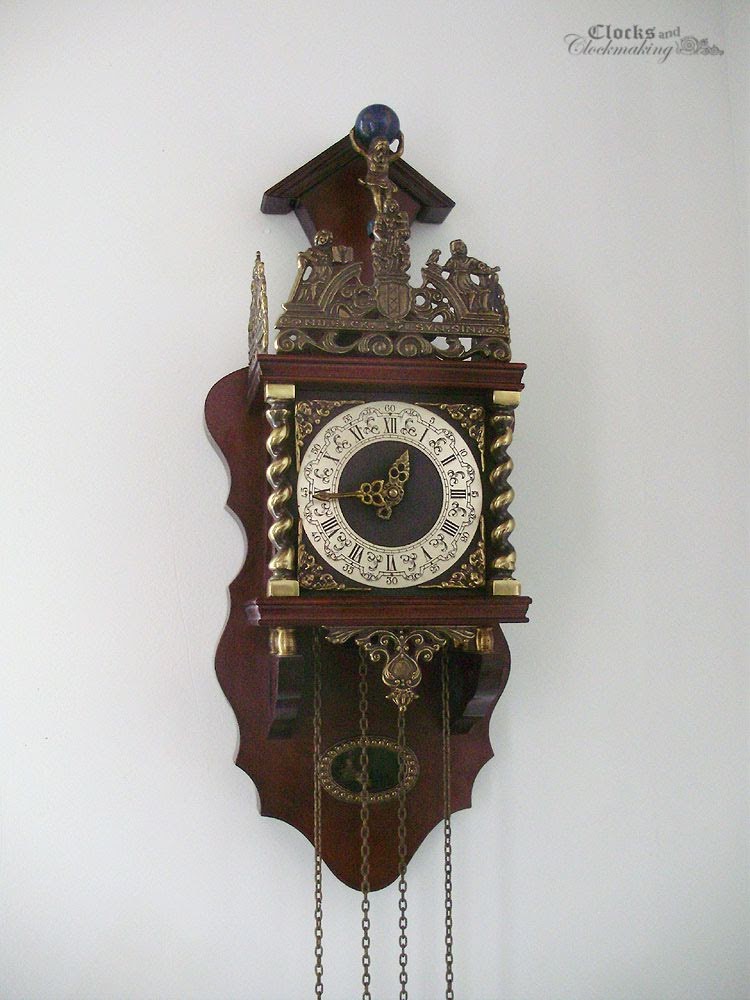 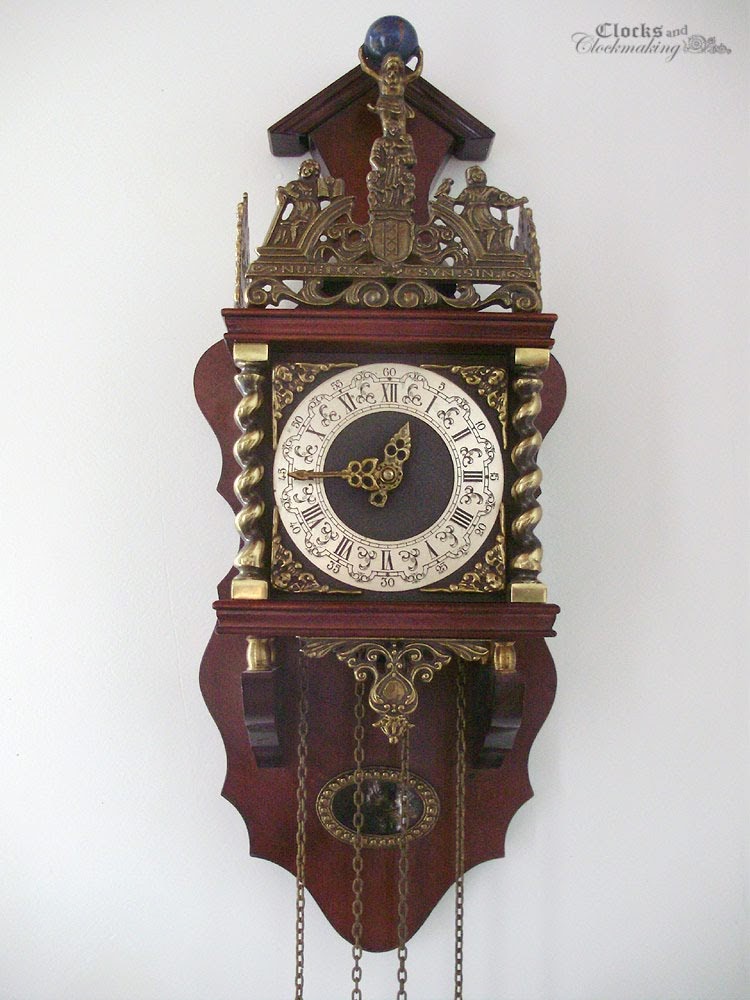 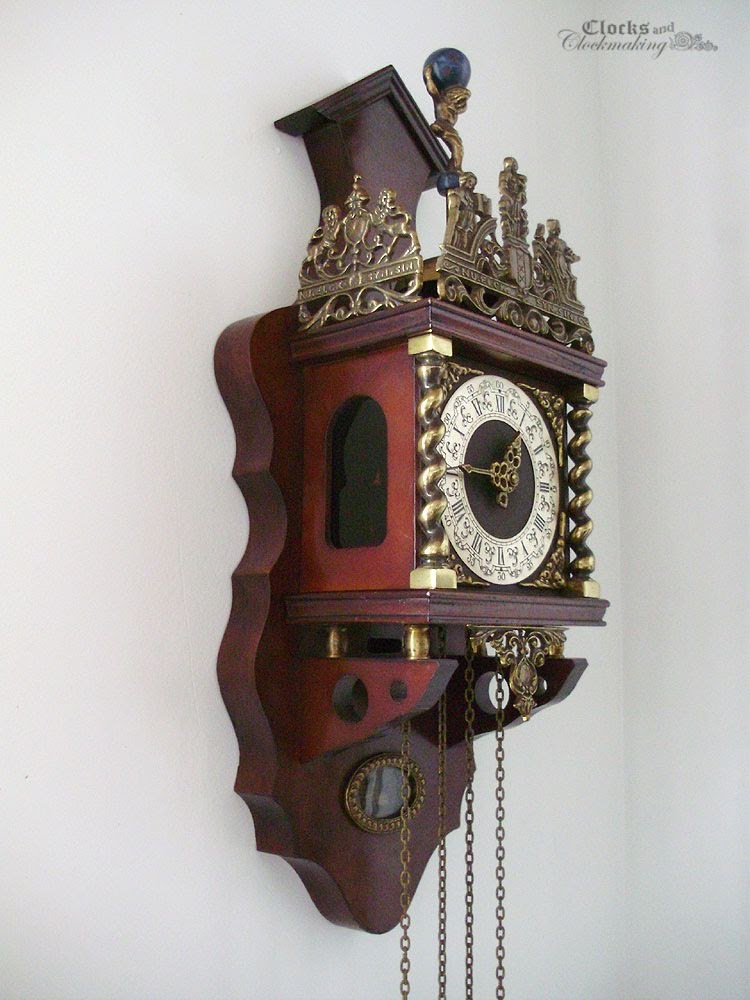 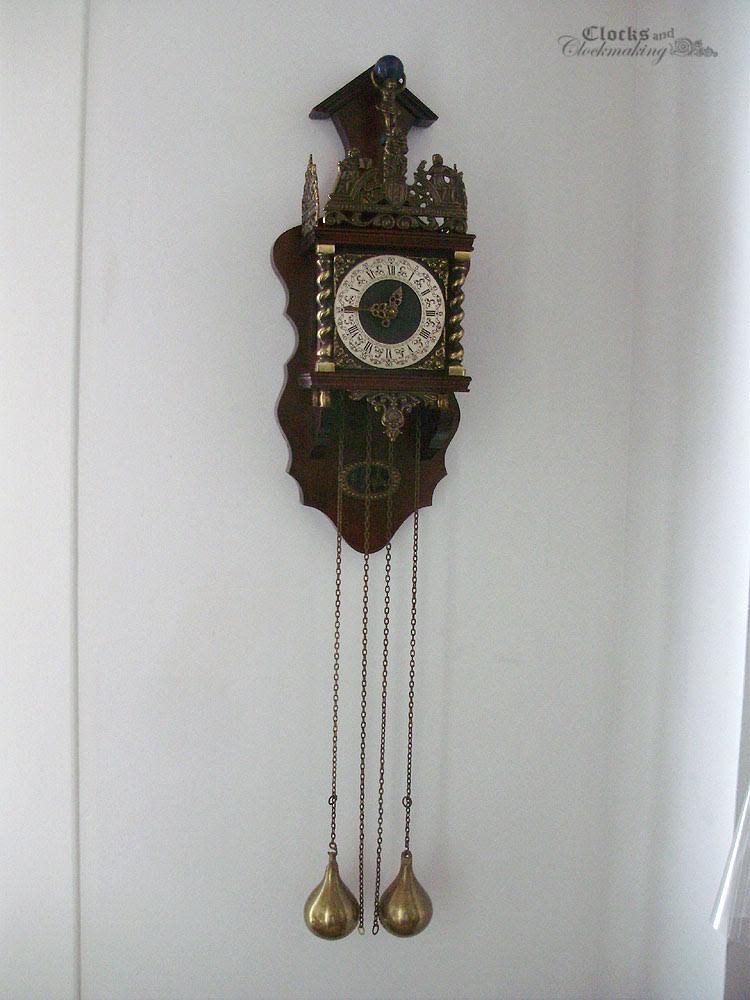 The second clock is by Hubert Herr of Triberg Germany, made 29 July 1971 (stamped with red ink on the case back). It has an 8 day movement with pear shaped weights. The pendulum is hung from a "swing" type suspension (like early Black Forest clocks) attached to the case. The movement is fixed to the front with screws (like a cuckoo movement). Side lights are clear glass for easier viewing of the movement. No back panel (you can see the wall through the side lights and in the pendulum opening). The front veneer is burled wood (possibly walnut). Dial backing is black velvet. Dial is a little over 4", and the clock is 24" overall.

This one is a bit smaller, and the wood is lighter. I prefer the hands on this one. 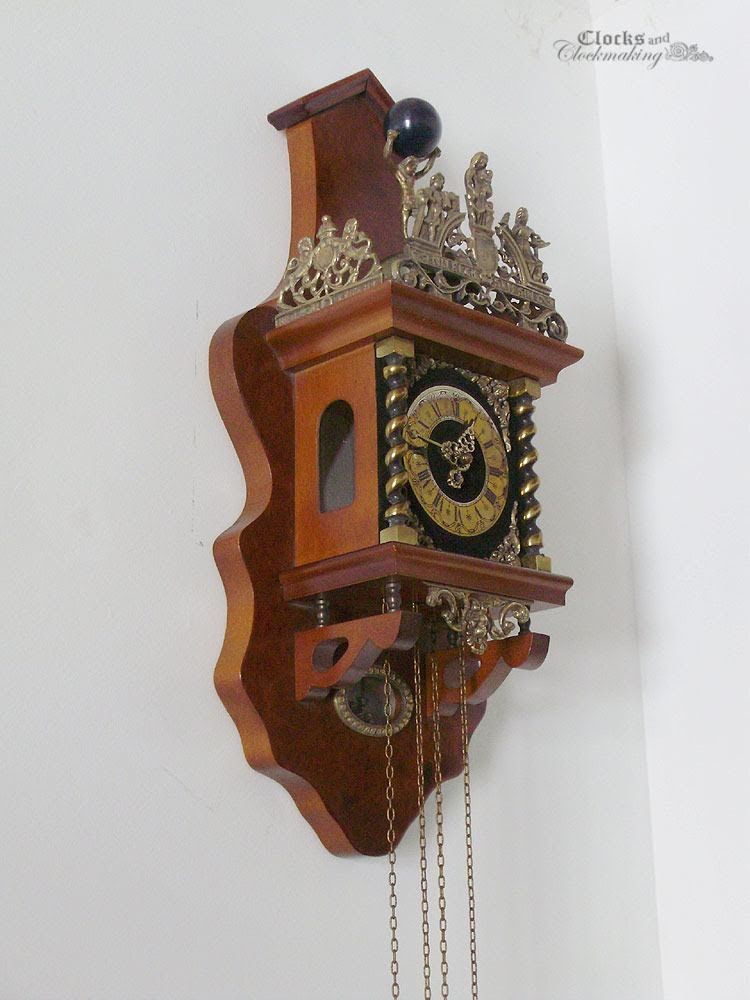 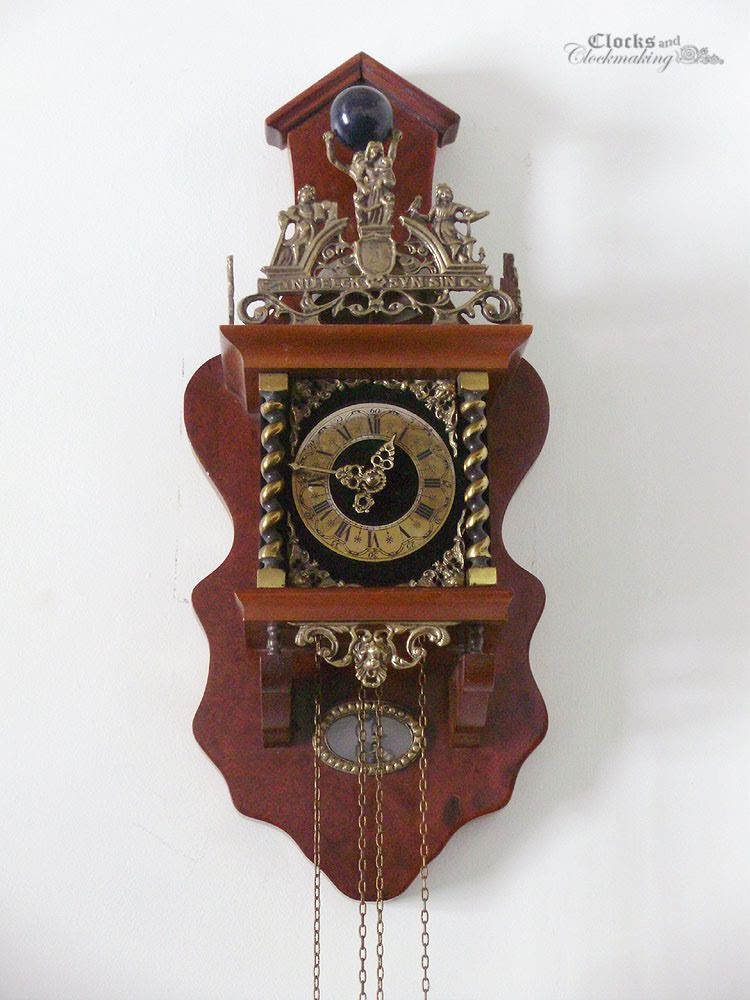 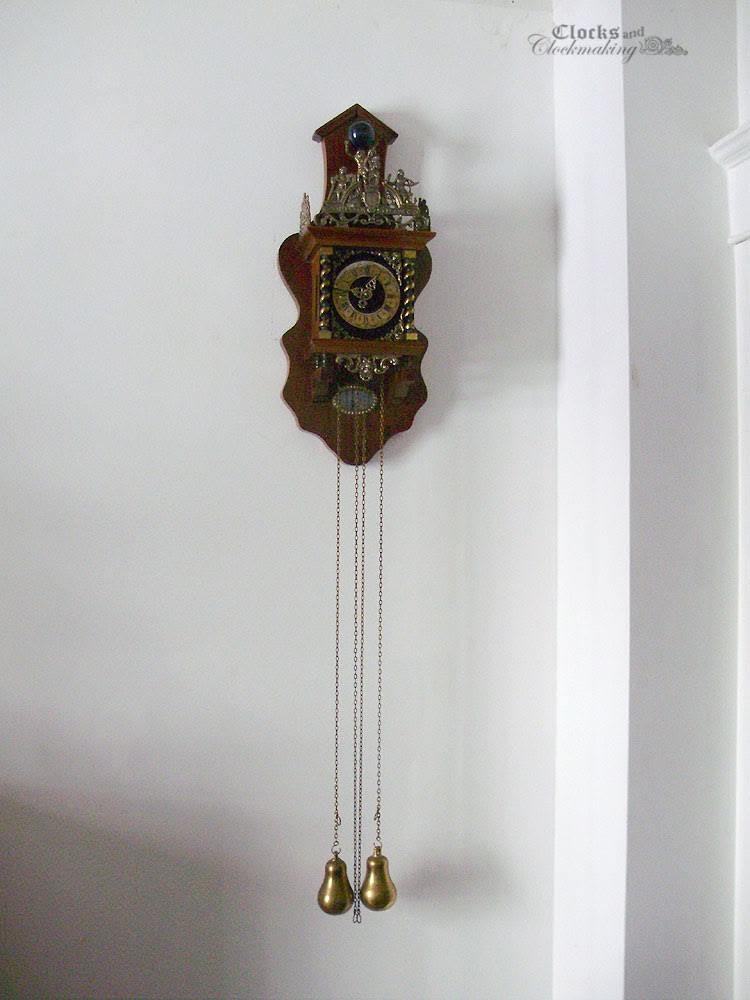 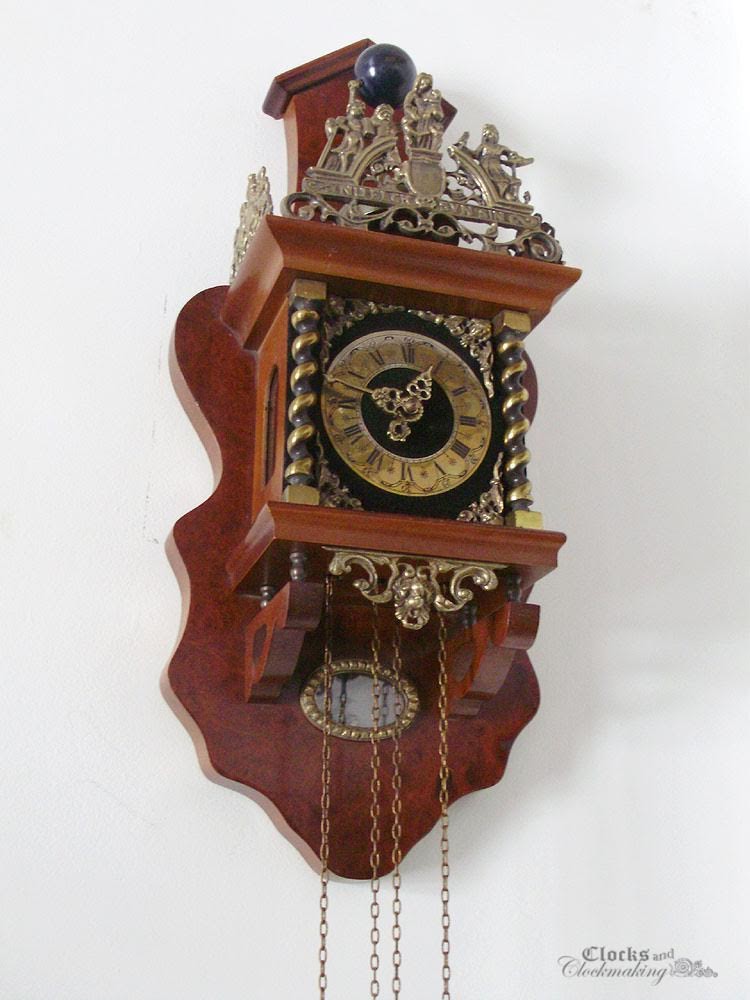