As you can see from the "before" photos in the previous post, the clock needed some attention. The case panels and frame needed refinishing, the movement desperately needed cleaning, and there were several bent levers. I also noticed that the clock was not striking properly. Someone in the past had modified the main strike lever. I'll go into more detail farther down.

As I said earlier, the first thing I did was clean the enamel dial. I also discovered that this dial has never been taken apart. The brass front has the original crimping around the edges, and retains the original brass rivets that hold it together. I would have liked to repaint the steel plate, but it was not worth the effort, or the risk of damage, so the dial was kept in its current condition. 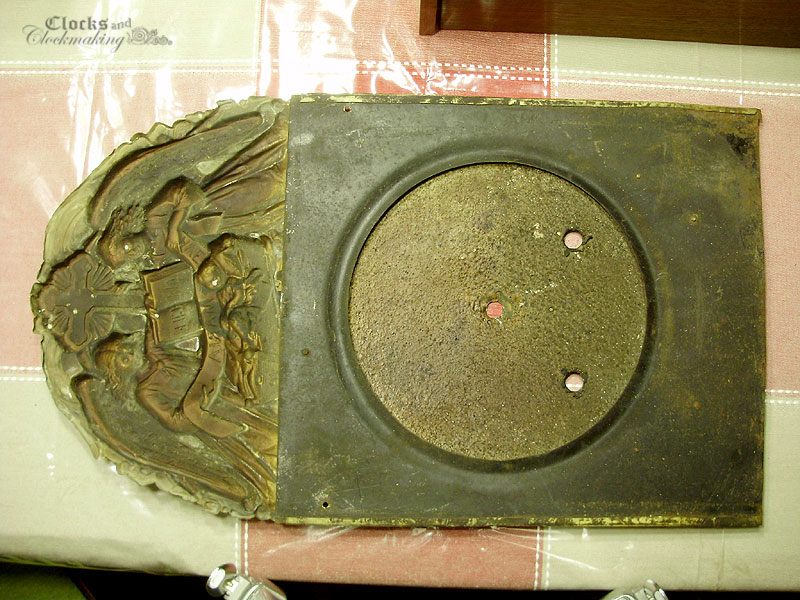 Here you can see two of the rivets. One holds the porcelain dial, and the other holds the thin brass decoration. You can also see that this corner has a broken dial foot (tab). 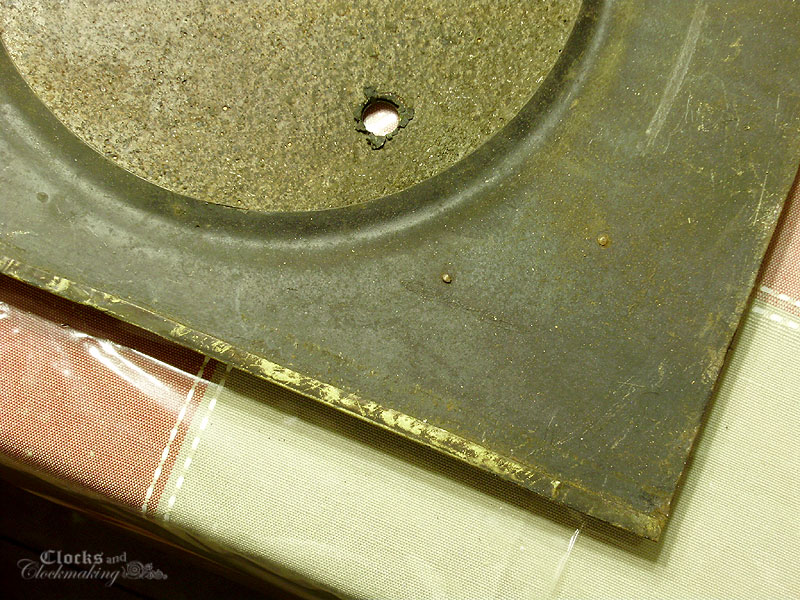 This dial foot is still in place. 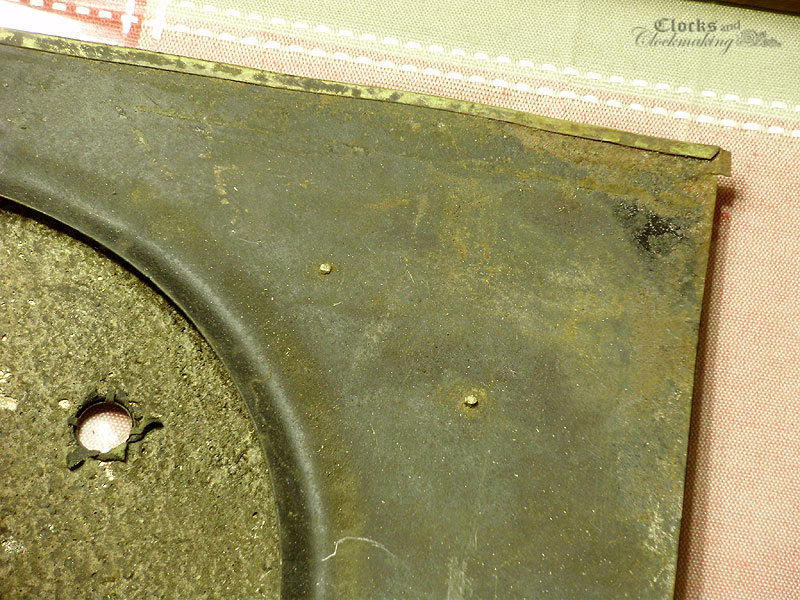 I will often say "this was one of the filthiest clocks I've worked on" but this time, I mean it. This was the ammonia cleaning solution after cleaning the wheels. 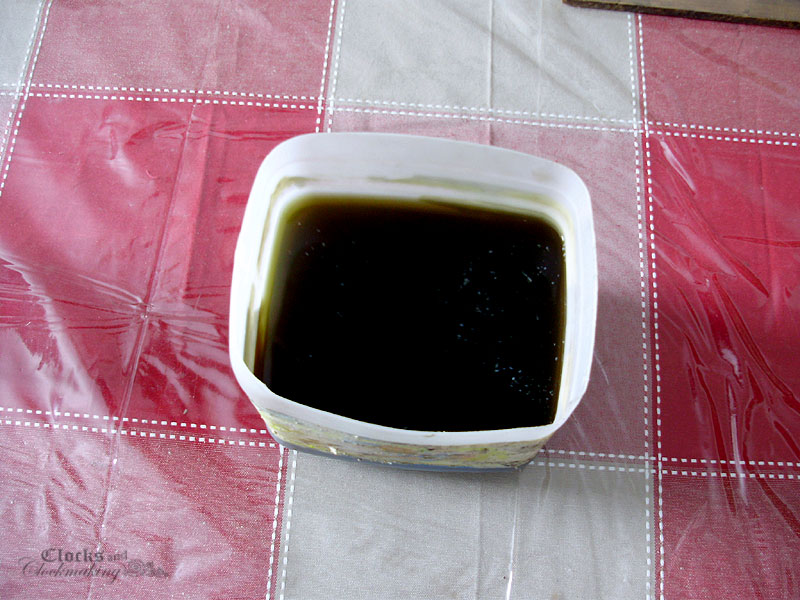 The wheels needed LOTS of scrubbing, longer soaking time, and an additional rinse in lacquer thinner to remove all of the black tar-like residue. I don't really know what was used on this clock, but the parts did have a roofing tar smell to them while I was drying them. Below you can see the cleaned and buffed (with #0000 steel wool) parts, with all the bent and damaged levers straightened. 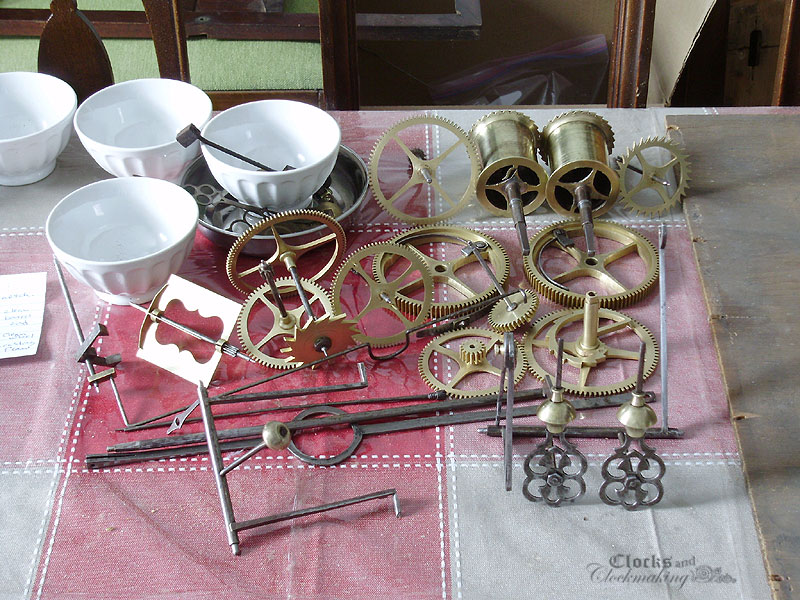 One of the fun discoveries on this clock is that it was made as part of a batch, and this one was punched as "number 5" with either 5 dots, or 5 small notches (on bridge pieces and the main frame). Not all the parts were marked, but all of the large ones including the pillars and frame were marked. 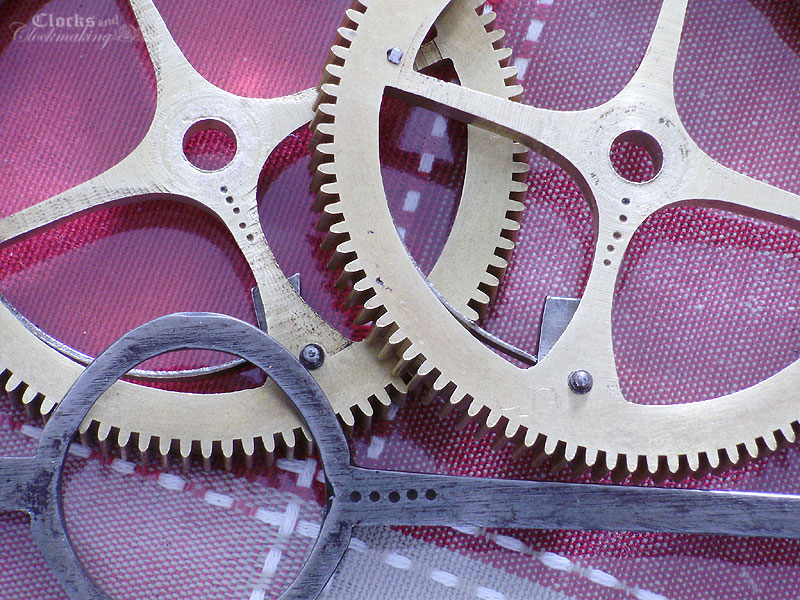 Stripping the old paint from the frame and panels. 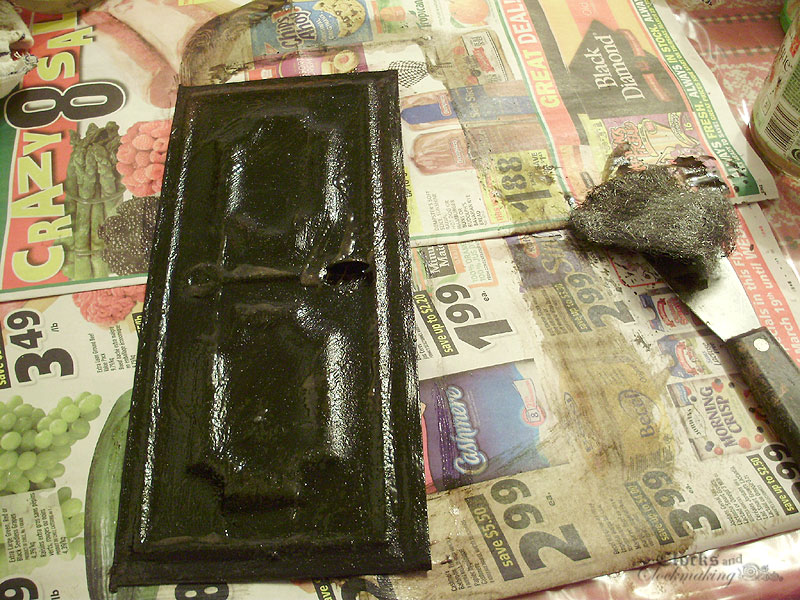 Before stripping. Note that the bell post ring/base/washer piece is actually brass. It looks black, but you can see just a tiny ring of gold on it. 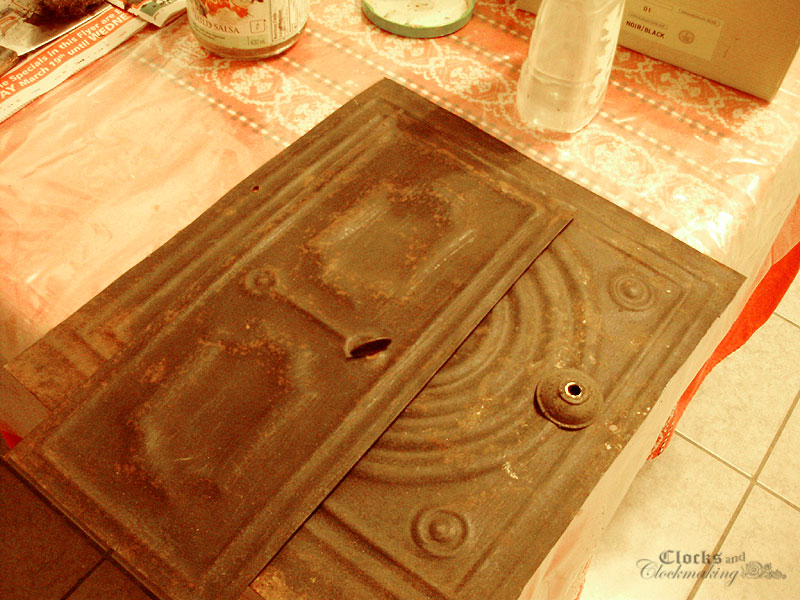 One detail that I neglected to show on the previous comtoise was this brass bushing in the centre pillar (for the motion works). Most restorers simply repaint the entire frame, but since I consider this a "working section" of the clock, I chose to mask it so it wouldn't be painted. 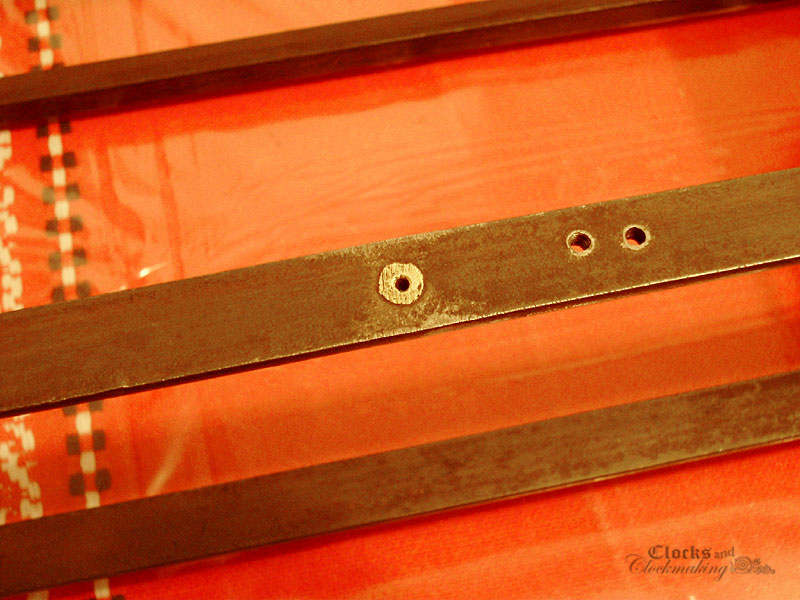 The simplest way to mask this is with a small ball of blue wall tack. The same was done for the vertical hammer post bushing in the top plate. 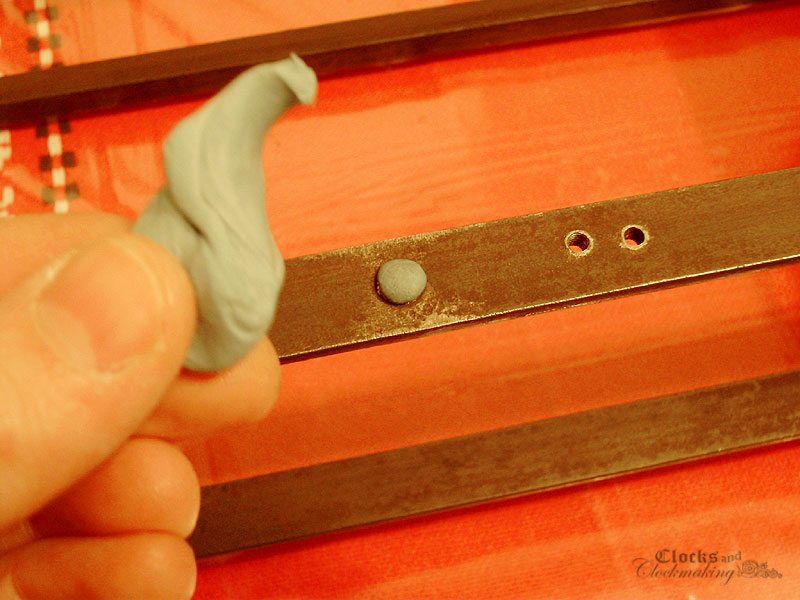 New paint. I used gloss black oil spray paint for this. 2 coats on each side, with 24 hrs to dry in between. 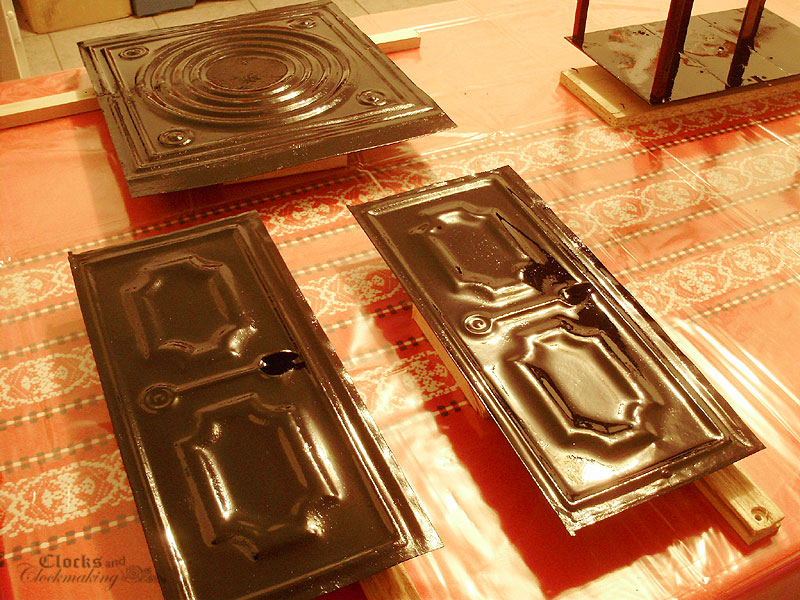 This shows the unpainted centre bushing after painting. (Note that the hole has not been pegged out and cleaned yet) 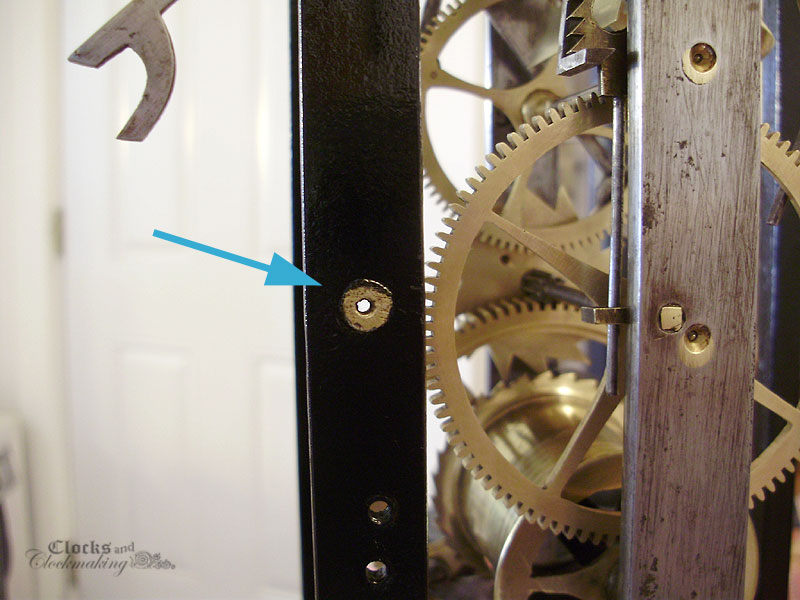 The fly wheel on this clock had a serious problem. This later design (this clock is likely after 1860) uses a brass tension spring that is held in place with a collar. While this arrangement is quite pretty, and works fine originally, it makes it impossible to disassemble the fan from the arbour for cleaning or repairs. In my particular case, the tension spring (which is brass) had weakened in the centre, and it was beginning to crack. This meant that it was impossible to hold any tension on the fan. 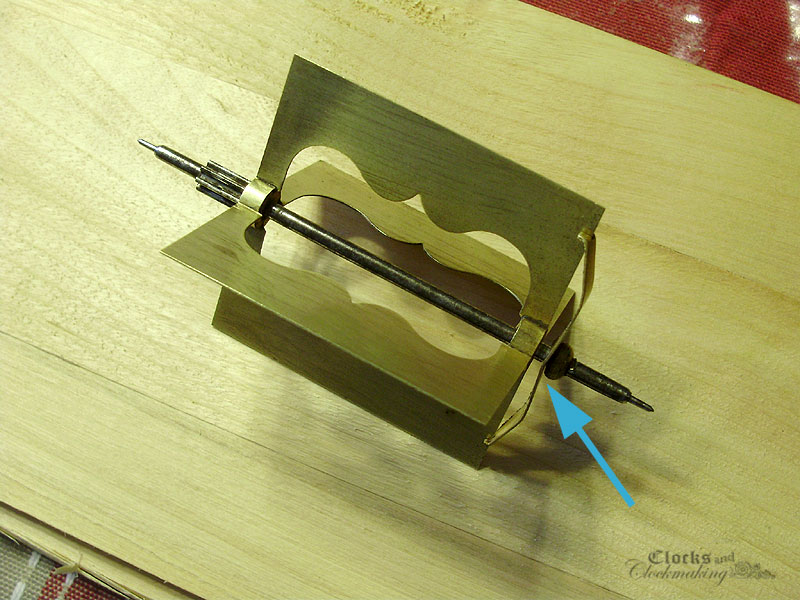 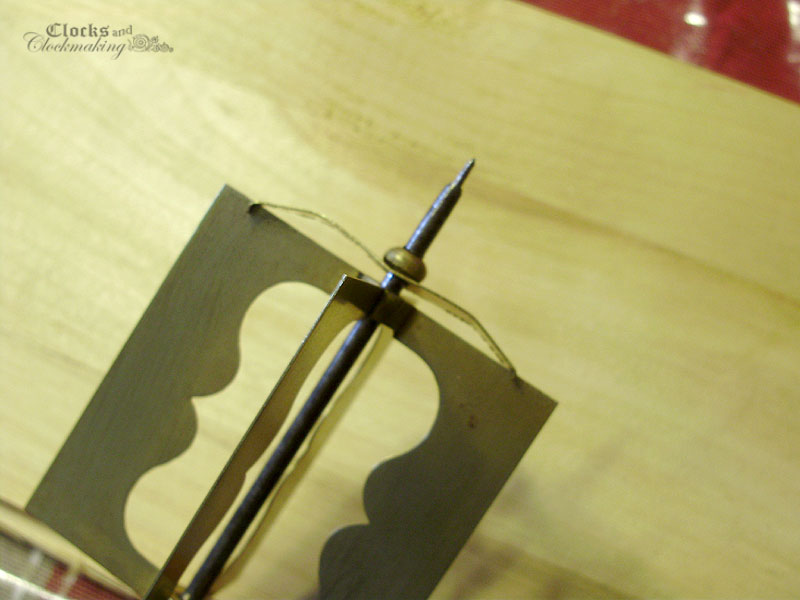 While I generally never like to modify anything in a clock from its original state, in this case I chose to alter the fan design in favour of the older style spiral tension spring. This was an easy and reversible repair, and with this style, the fan can easily be taken apart, or re-converted if desired. 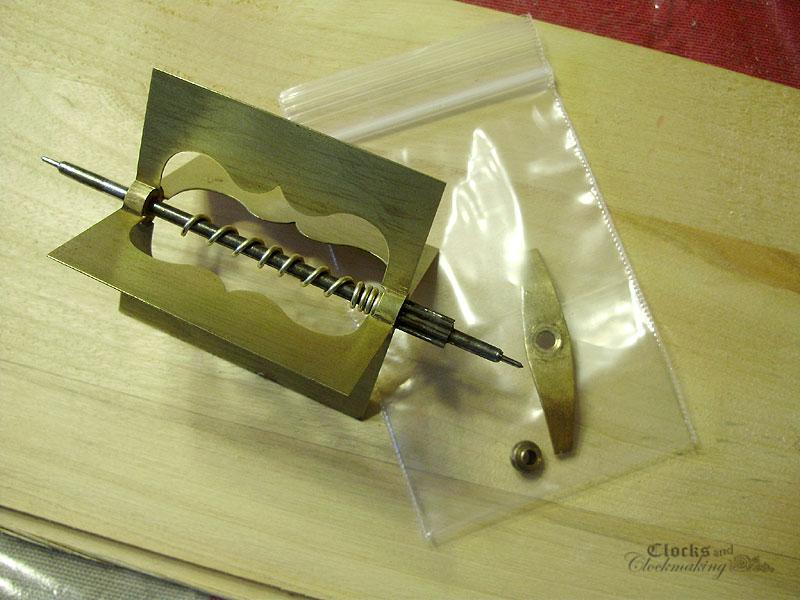 This was a fairly complicated, or "advanced" repair. It is not necessarily a very difficult repair, but it is probably not one for a beginner.

The problem was with this lever: 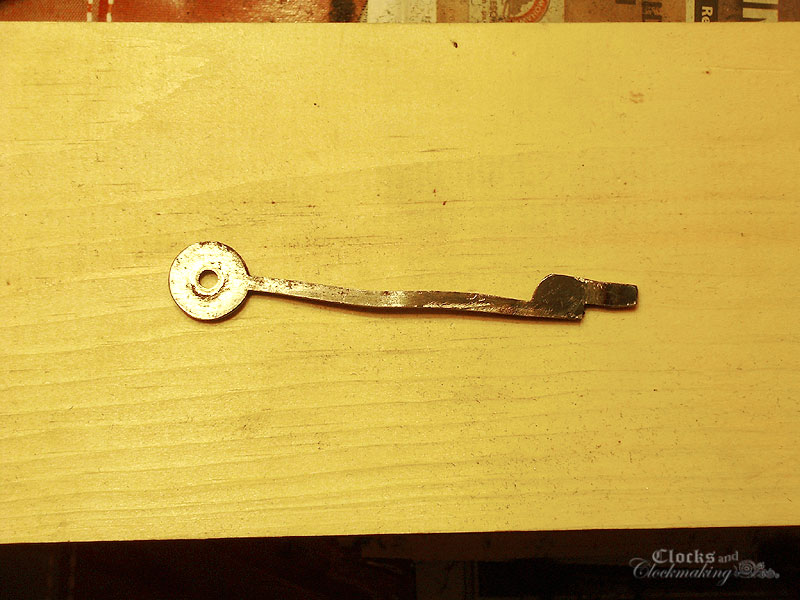 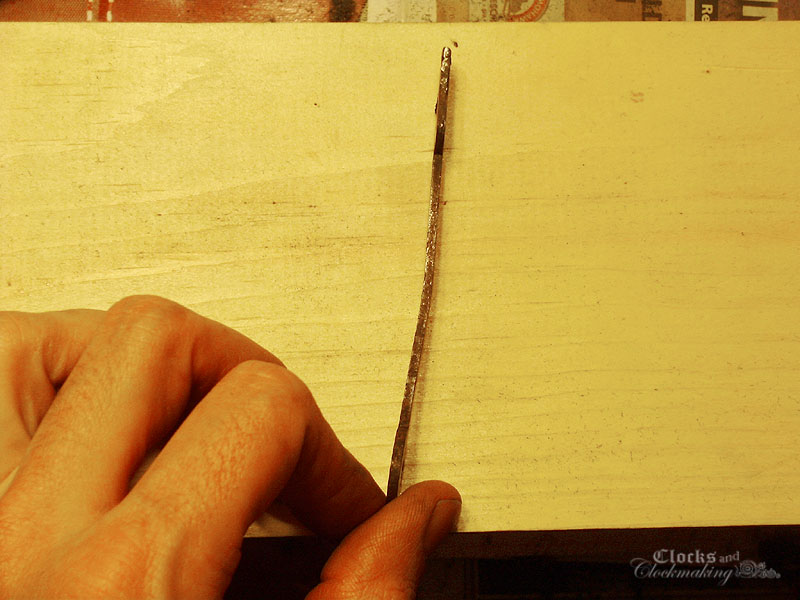 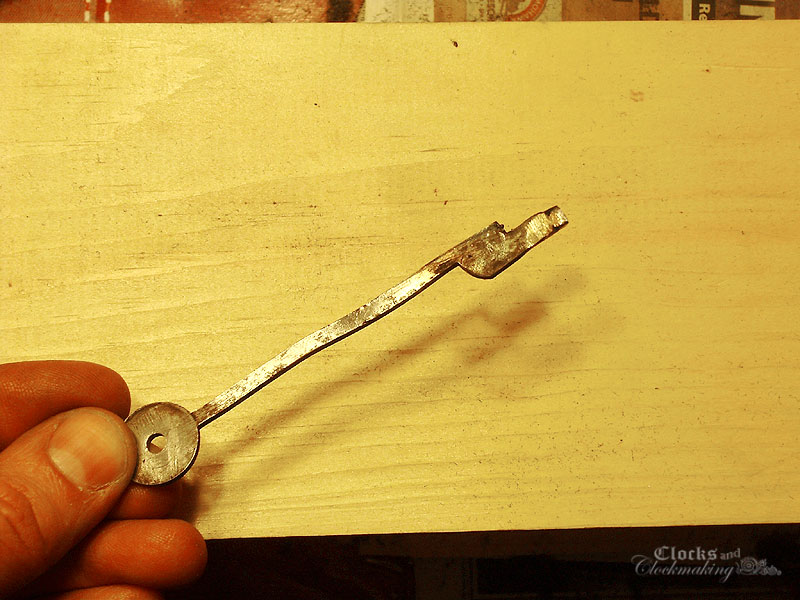 When I originally looked-over and checked the clock after unpacking it, I noticed this botched lever, and as expected, the clock did not strike properly. It would ring the hour once, then do nothing on the half hour. For some reason, this lever had been ground and filed, and it no longer had its original shape. With the rest of the clock restored, and all the other levers straightened and repaired, this lever was in no way functional with the pins and stops that it is meant to interact with.

This lever controls all the strike sequences of the clock, including the half hour strike, the hour strike, and the repeated hour strike. To figure out exactly how it was meant to be shaped, I carefully studied my working comtoise clock, and I will attempt to explain as much as possible how the repair was done.

The first step in the repair was to replace the missing steel. For this repair I used soft welding steel (easily obtainable at most hardware stores). The rough existing lever notch was then filed into a nice rectangle to accept the new steel. It's important to have a nice clean joint. The steel was soldered with silver solder. For simplicity, it was easier for me to solder the entire steel bar to the lever and cut off the excess afterwards, since holding and heating a tiny little repair piece would have been awkward and difficult. 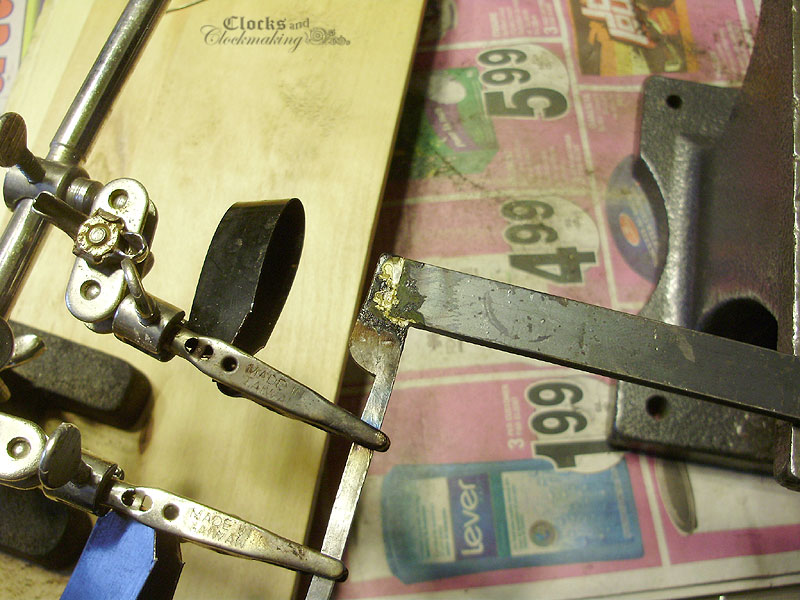 The bar was sawn off, and most of the excess steel was then ground away with a grinder, and coarse files. 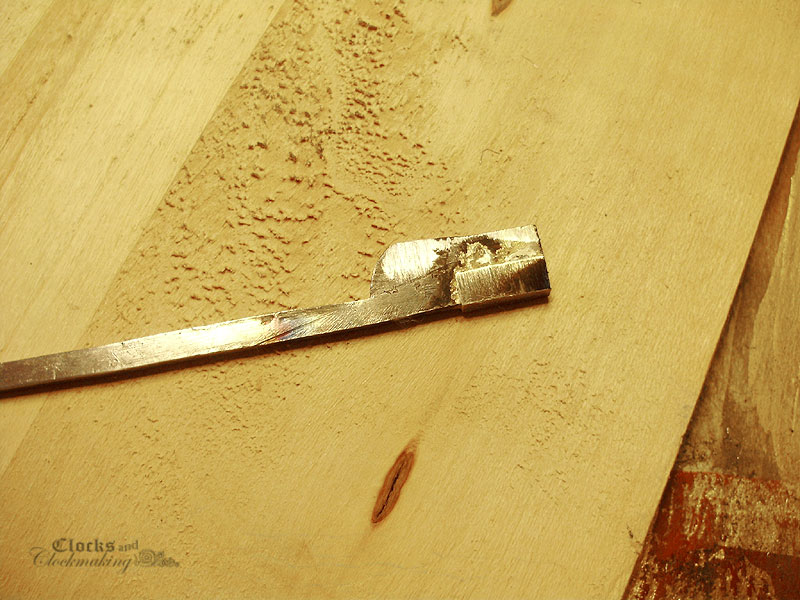 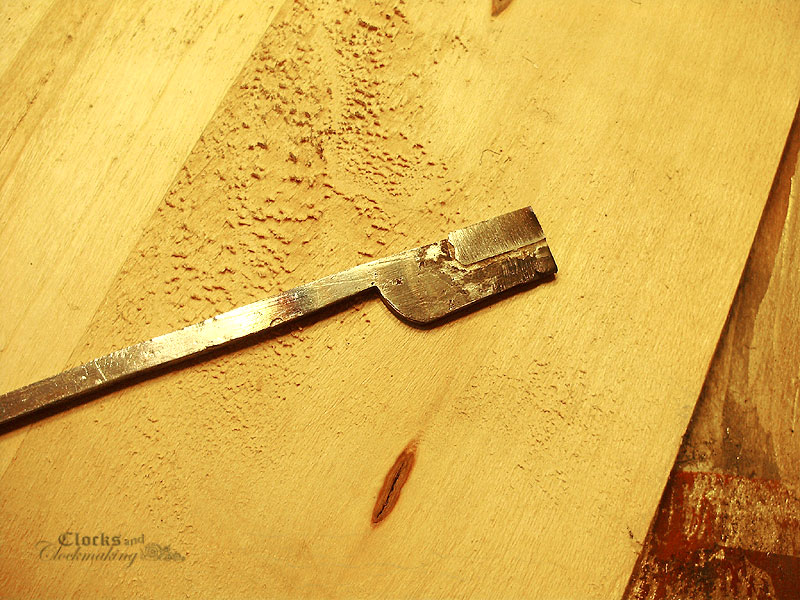 Now that I had a nice new "blank" to work with, the lever needed to be ground to length. To do this, I had all the strike train assembled, along with the minute wheel, and with the detent set up before the first hour strike (all the way out), the lever needed to be JUST long enough to drop off the "rack/stop lever pin" (I am not sure of the proper name for this lever). If the lever (the one we're working on) is too short, the half hour may not strike correctly. In my case, the lever was a bit long, so I was able to grind the end slightly for an exact fit. If it had not been long enough, a solution would have been to bend the L shaped arm (the one on the detent that carries this lever) inwards slightly (towards the wheel).

Here is position 1, right before the main hour strike, where the flag is just long enough to drop off the "rack/stop lever pin". 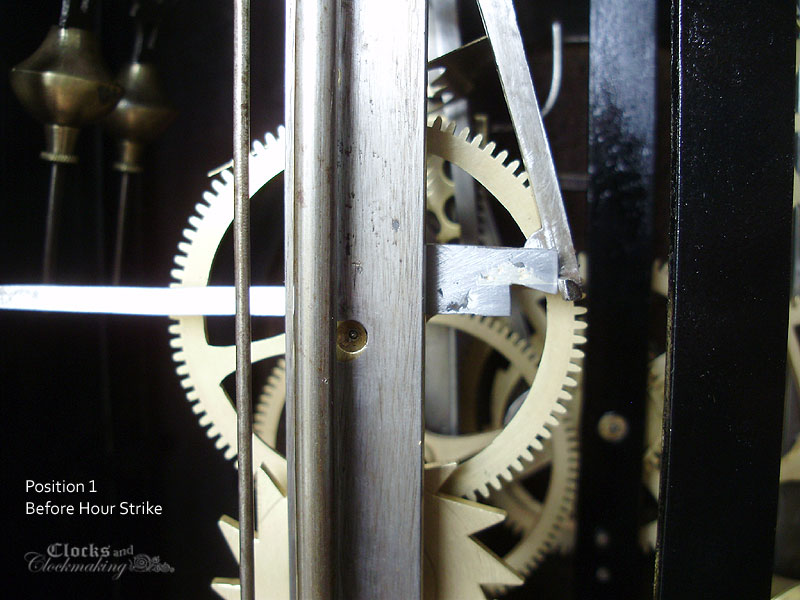 The corner notch is the trickiest portion of the lever to get right. Start small, and enlarge it slowly. The lever will need to be taken on and off numerous times, but luckily it is simply held in place with a screw, and it can easily be taken off without taking anything else apart. The notch needs to be wide enough (to the left) to catch the "rack/stop lever pin" AFTER it locks on the stop pin of the third wheel (just behind it). You can see that I made my notch a bit too deep (top to bottom) but it still works nicely.

Position 2, just after the main hour strike, and before the repeated hour. 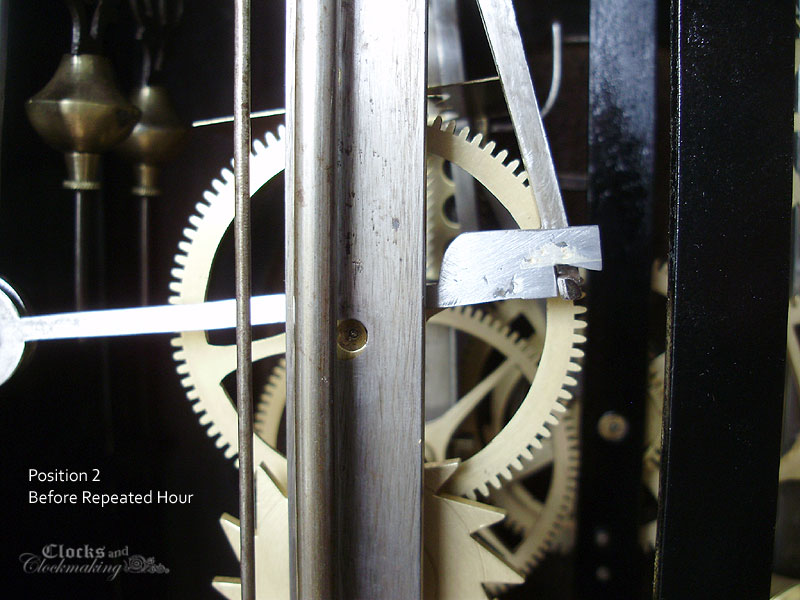 After the repeated hour, the detent and lever will be in this final third position. 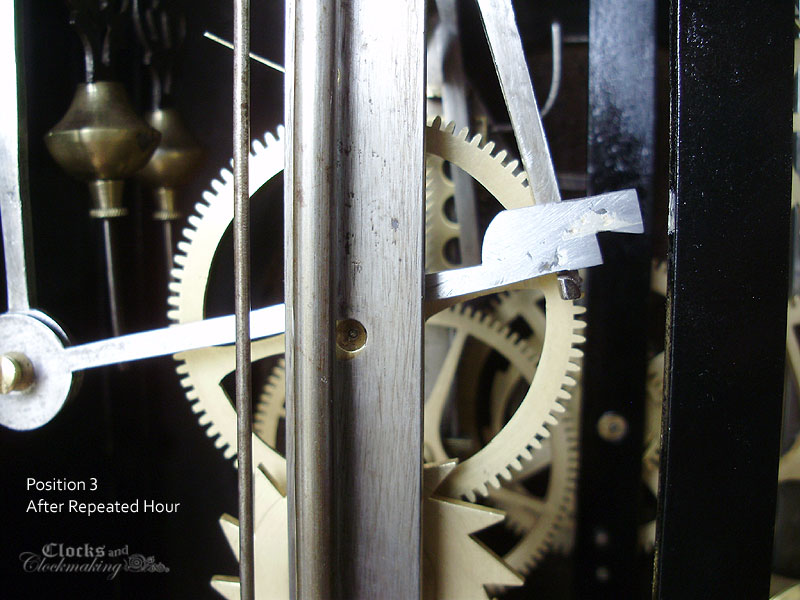 As the minute wheel advances towards the half hour, the lever will drop down the steps and back into "Position 4" (same as Position 1). The only difference is that the notch in the minute wheel only lets the detent fall far enough to nudge the "rack/stop lever pin" and allow it to do one rotation for a single strike. 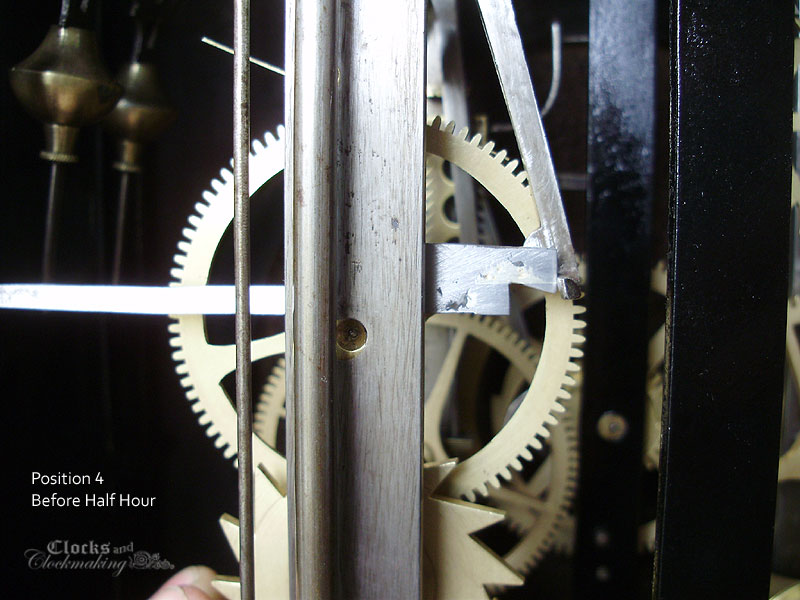 Here is the completed lever after final filing, sanding, and polishing. It's not perfect, but it's a pretty successful repair, and I'm very happy with it. I'll just add a quick note here that some of the older levers have a "tail" at the top corner, which is simply decorative. I have no idea if this one had one originally, but most of the later movements were simply shaped in this notched flag form. 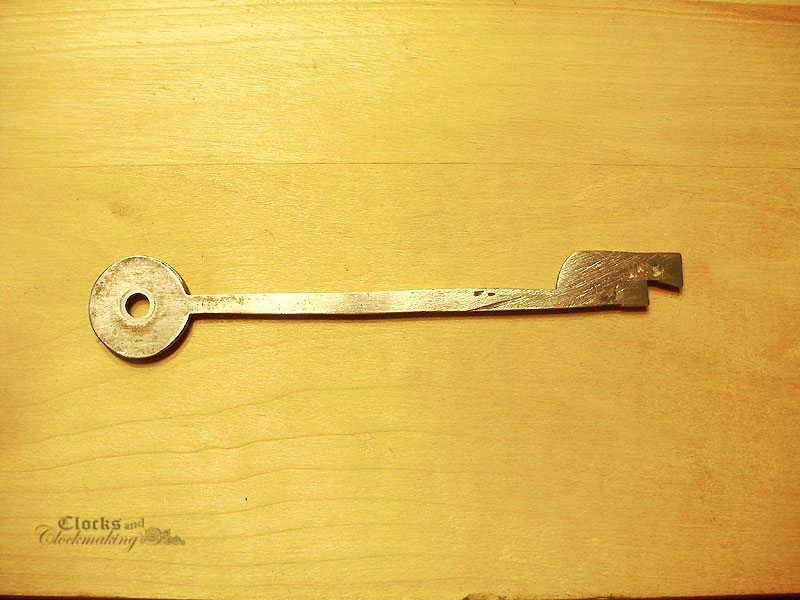 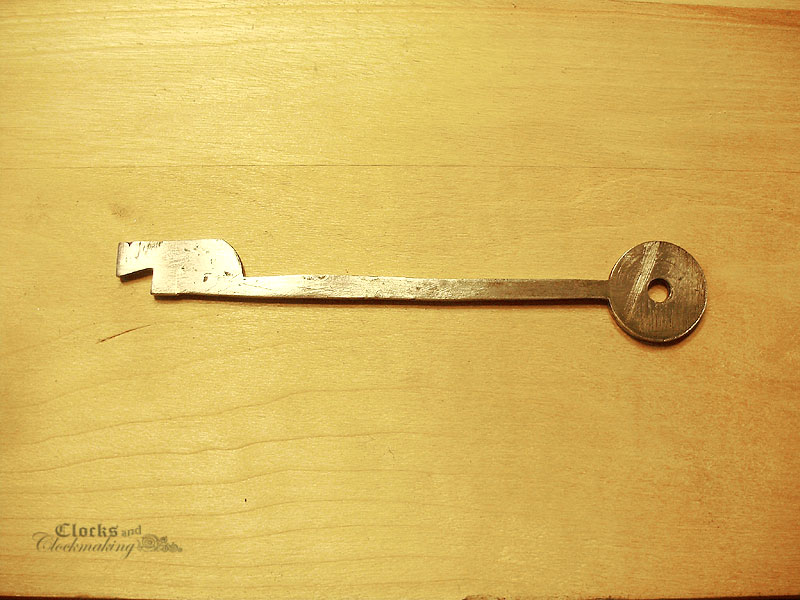 The clock is now mechanically functional, but I still need to strip paint off the hammer and bell stand (I had not noticed the paint), and then I will need to buy weight cords, hooks, etc. I should be able to post photos of the completed clock soon.
Posted by JC at 8:15 AM