I currently have a lot of small projects I'm working on at the moment. I'm still repairing wooden clock cases and fixing veneer, I'm replacing missing strike components on a rare month going longcase clock movement, the mirror clock movement is still on the test stand, and there are also several other small cleaning and repair jobs.

That said, I don't have too much finished work to post except for a recent project, which is the complete restoration of a beautiful, somewhat early Comtoise clock. I would estimate this one to date around late 1840s, into the 1850s. I have wanted a comtoise for AGES (at least 6 or 7 years) and after losing the one at auction, I decided to actively hunt one down. Unfortunately, most of them are in Europe, so I knew I was going to pay a pretty penny on the shipping, and I wasn't wrong. I did get a bargain on the clock, so the shipping included still made it a good deal. The clock came complete with original weights, a key (likely the original), and a later (but matching) pendulum.

The clock arrived slightly damaged, but nothing too serious. Here's how it looked when I got it. The first thing I noticed was the the decorative front had been bent to fit into the box. This was despite the seller (a lady in France) telling me she would very carefully pack the clock. I was later told that she has a broken arm at the moment, and either her teenage son, or her husband was the person who packed it.

The blue line approximates the crumpled brass front. The bell was jammed tightly into the cardboard of the box. 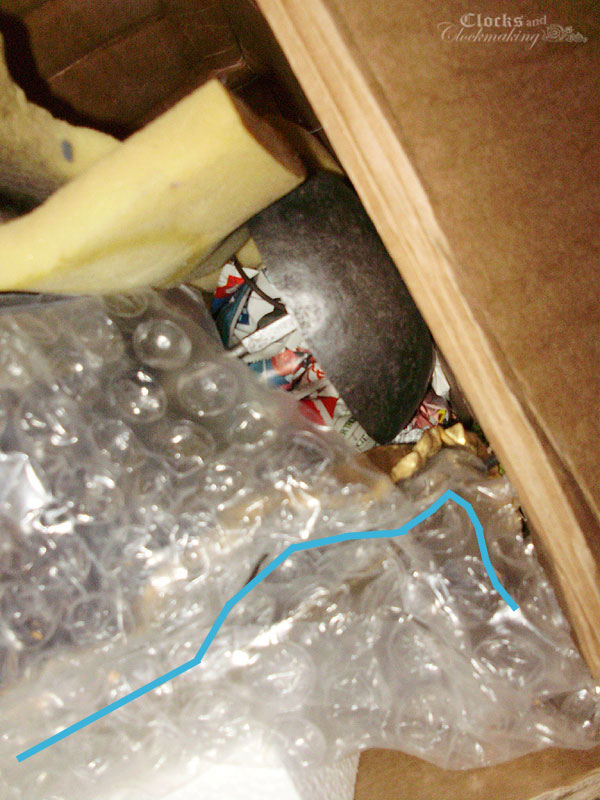 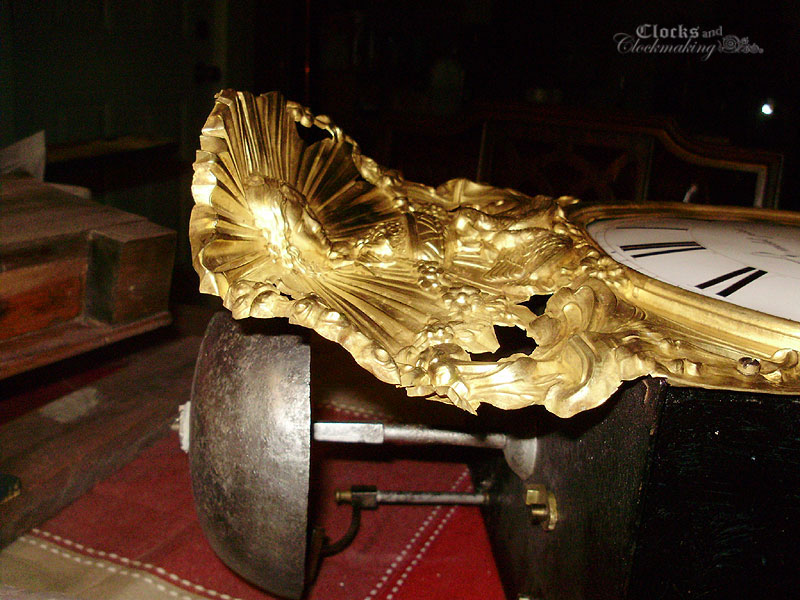 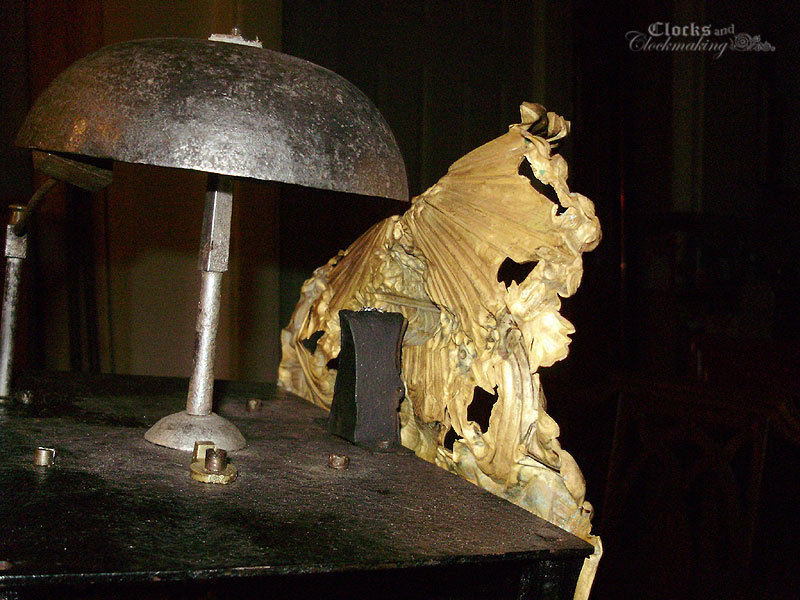 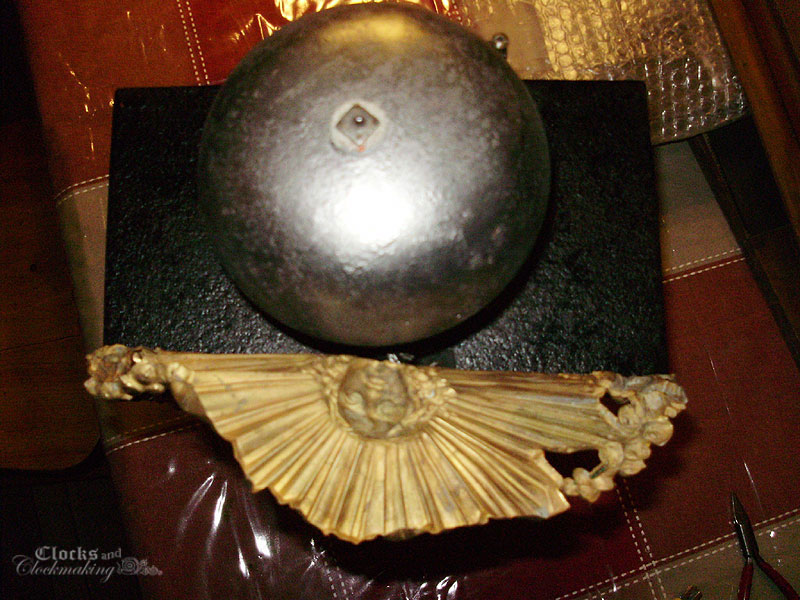 The hands are one of the first things I remove, since I'm always afraid they could get damaged. 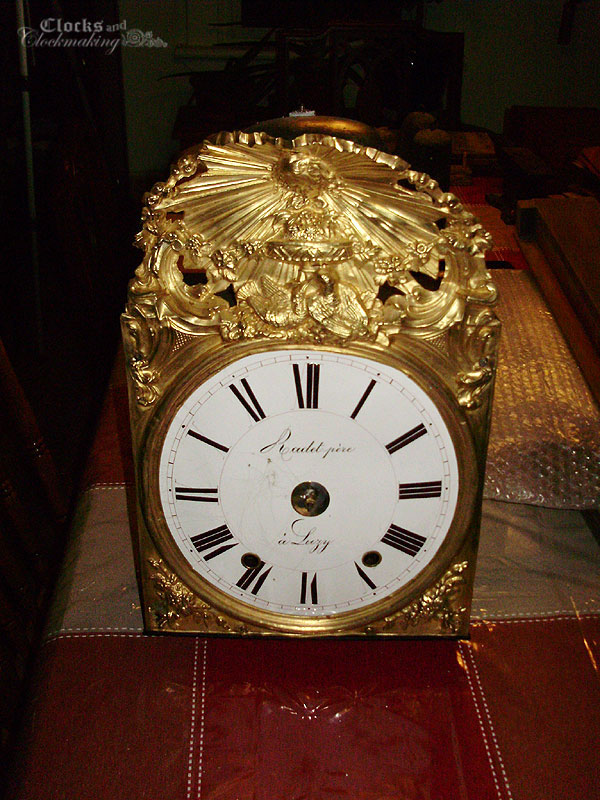 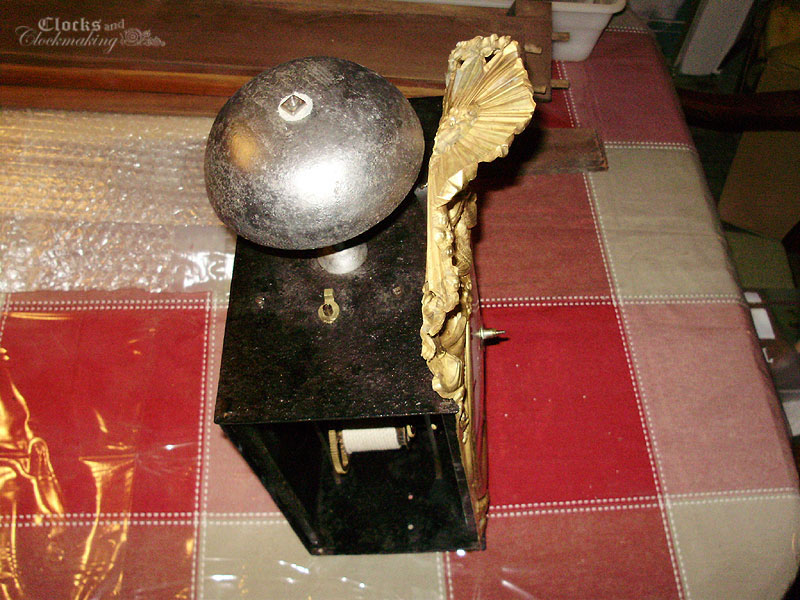 The movement was not overly dirty, but this is the only "before" photo I took. I'm usually very good about photographing EVERYTHING and getting good 'before' photos, but I was too excited to get to work on this particular clock. 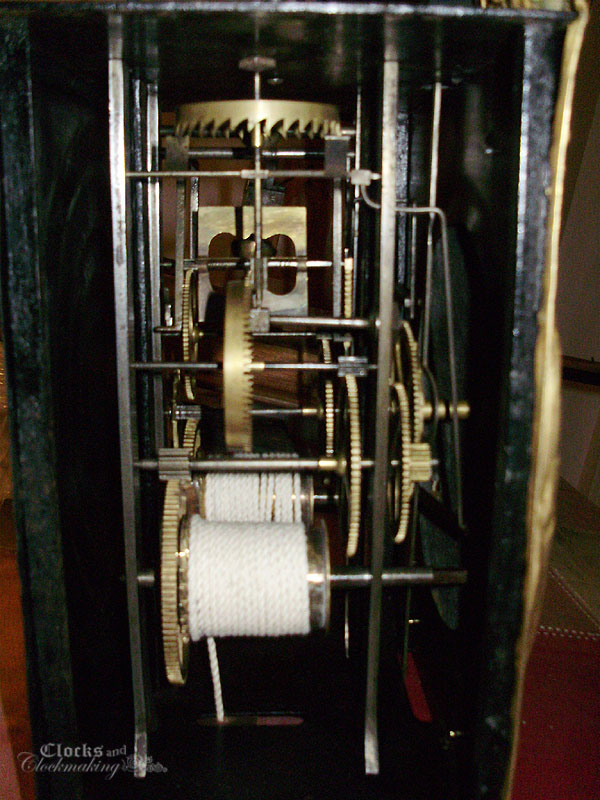 One immediate problem I faced was that some idiot soldered a brass disc to the canon wheel. I was able to carefully carve most of the solder away, and then free the disc. Also note the chips in the dial, because I didn't get very great photos of those either. 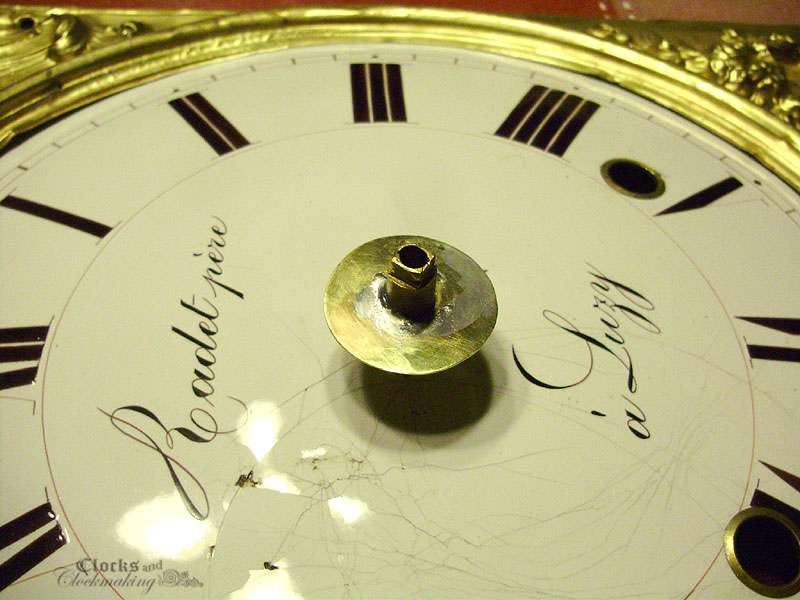 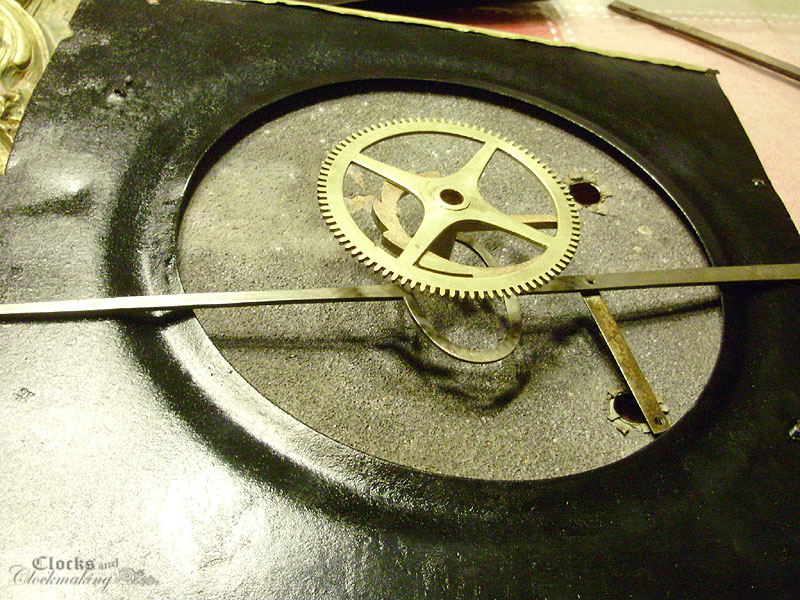 The clock was a bargain, but I also knew that it had a few problems that would need to be fixed. One of these was that a lot of the assembly "tabs" were broken. The tabs are just 1/8" square bits of metal on the ends of the plates, and from years of use most of them have broken off. The clock had 1 of 2 on the front panel, 1 of 4 on the two doors (which act as the hinges), and 0/2 on the back panel. All told, I would need to repair at least 4 of these.

The frame and panels were also showing signs of rust coming through the paint, which would need to be addressed. This means paint stripping as well as rust removal. Other obvious problems were repairs to the enamel dial, repairs to the brass front, as well as repairs to many dents in the pendulum bob. The clock mechanism would also need standard cleaning and oiling.

Part 2 will show the majority of the various repairs, and Part 3 will have the final 'after' photos.
Posted by JC at 8:02 PM