There are still a few repairs I need to do with this clock, but they are minimal cosmetic items: new minute hand nut, toothed hour hand washer to hide the square locking nut, acid-wash the hammer (I forgot to do this), and fix the pendulum (which is currently 4" too short).

Overall, I'm exceptionally pleased with this clock. The quality on it is superb, and I've always wanted a crown wheel clock (in any form). If you're not familiar with Comtoise clocks, they are French clocks made originally to be fitted into wooden longcases. The early ones (like this one with a crown wheel escapement) had simple circular bobs with folding rods, while later ones had large fancy pressed or lyre bobs. This clock also has silk thread suspension while later ones have a metal suspension springs. They strike the hours twice (once on the hour, and again a few minutes later), while also striking a single blow for the half hours. I will make a video of the clock striking at a later date.

The earlier versions (in this style) had 2-piece brass fronts, and date to before 1840, while the fancier ones with larger pendulums started around 1860. This particular clock falls somewhere between these dates, and I would estimate that it's from the late 1840s, into the 1850s.

The clock is a medium size at roughly 10" x 16". There are miniatures, as well as larger examples.

The names on the dials of French clocks are of the retailer who sold the clock, rather than the clockmaker. I did a bit of research about "Radet" in Luzy, but I did not find very much. Luzy is a lovely little French village with less than 2000 inhabitants. I did not find any other "Radet Père"* clocks, but I did find 3 "Radet Puiné"* comtoise clocks (which I assume may have been made by the son?), and one mention of a Radet Puiné for sale at auction (a description only - no photo). Other than this, I found one clock by another clockmaker in Luzy named "Mercier à Luzy". Most of all the Luzy clocks I found, however, are dated much later than mine: closer to the 1880s styles (oval/rectangular dials with anchor escapements).

*Père in French translates to "Father" in the same way as in English, where it could mean a dad (father) but also a priest (Father). More likely a dad in this case, but that's just my educated guess.
*Puiné is a French word I've never heard before, but appears to come from the two words "Puis" (also) and né (born) and means "someone born immediately after his/her brother or sister". 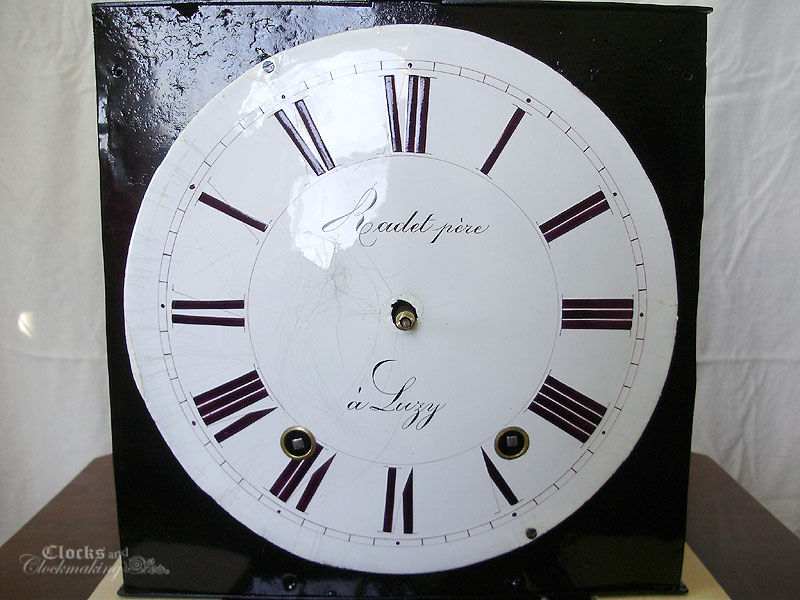 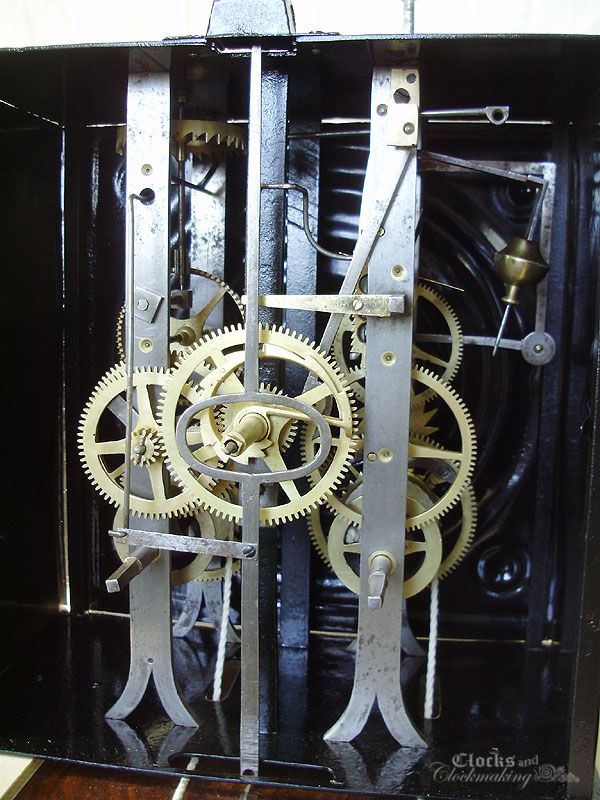 Neither of the side door photos turned out very well. The patched hinge tabs are on the inside, so they don't show at all unless you open the doors. Also note that this clock has plain flat doors. Many comtoise clocks have fancy pressed patterns on the doors. The doors are popped into the frame by gently curving them. 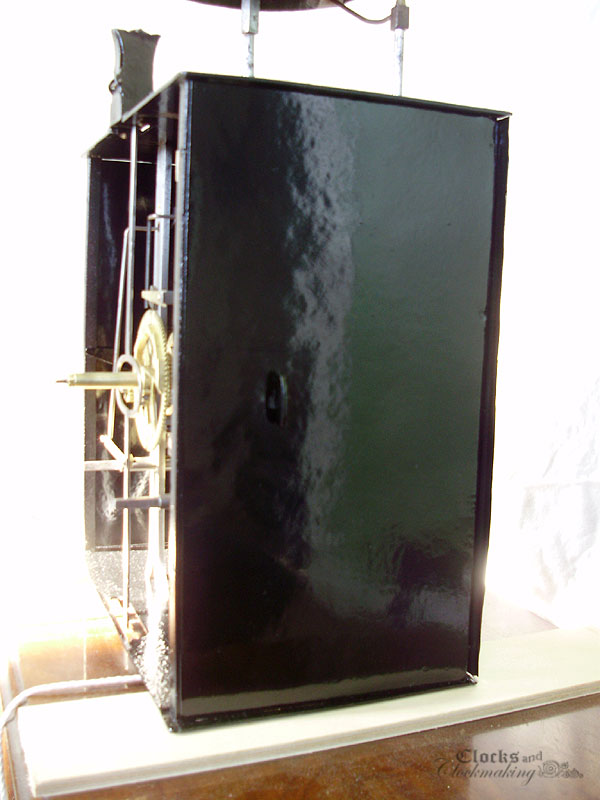 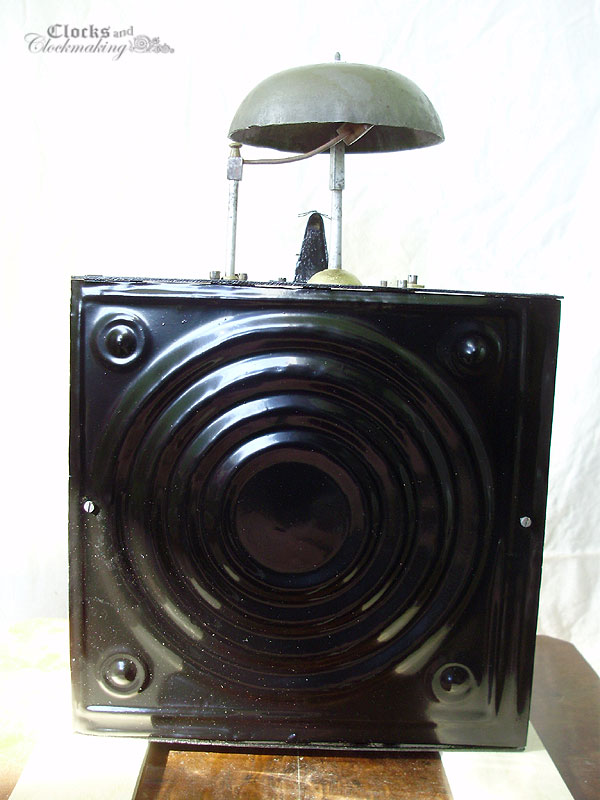 Note that I still need to clean the rust off the hammer, and polish the brass hammer screw. The large gold washer at the base of the bell stand is iron. These are usually brass, so I chose to paint it gold rather than black. 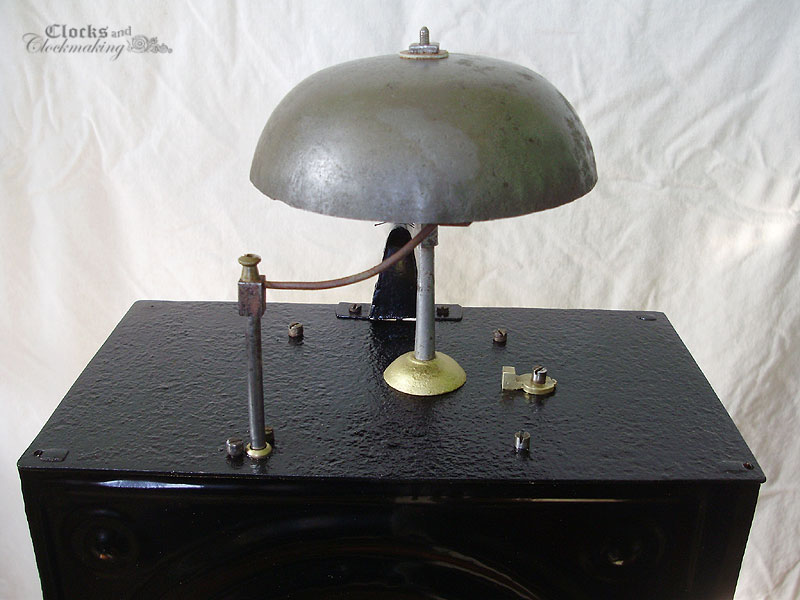 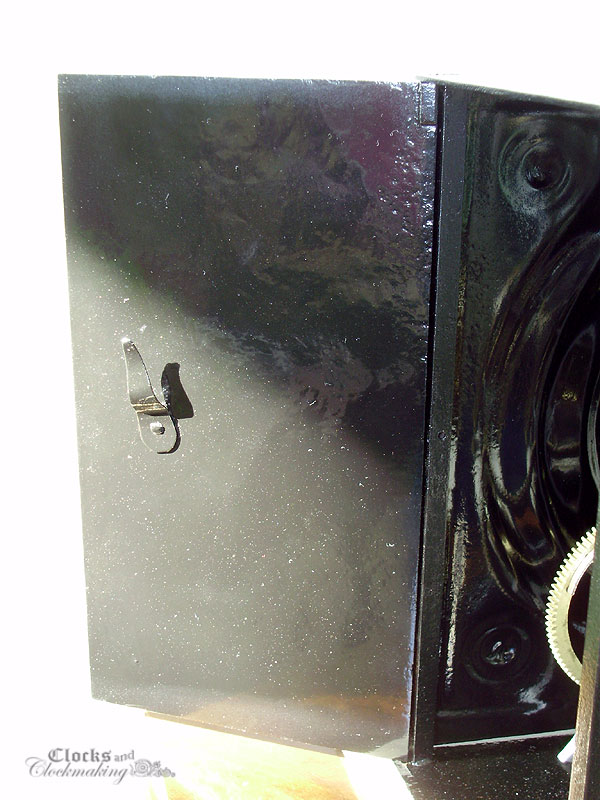 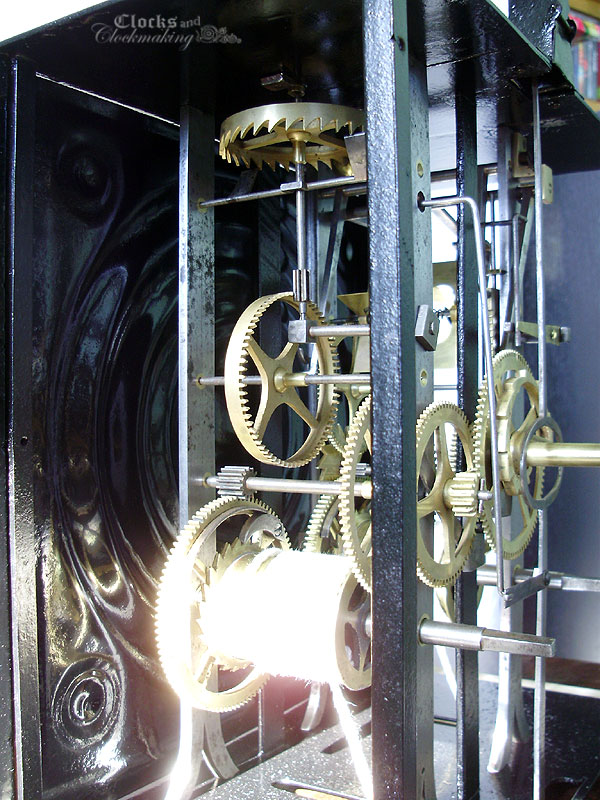 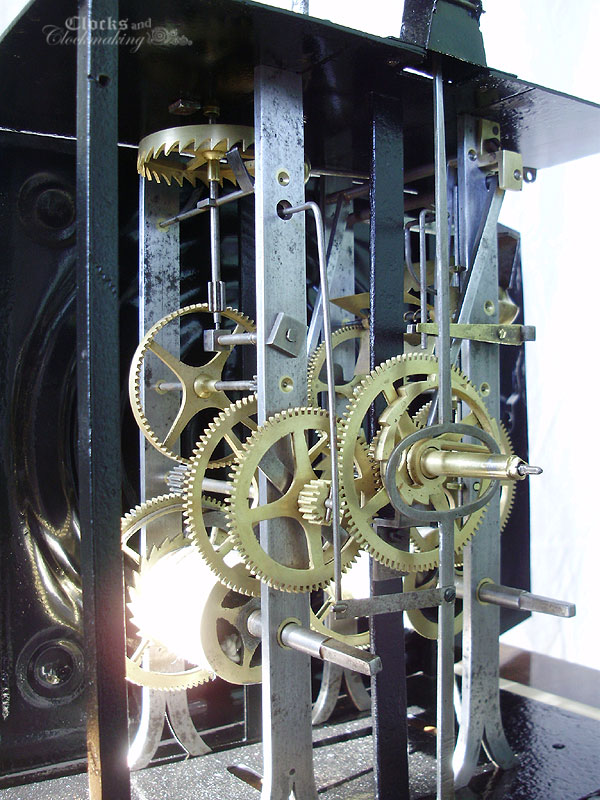 Strike side. In case you're curious, the large pointed brass bobble merely acts as a weight. It doesn't actually engage any moving parts. 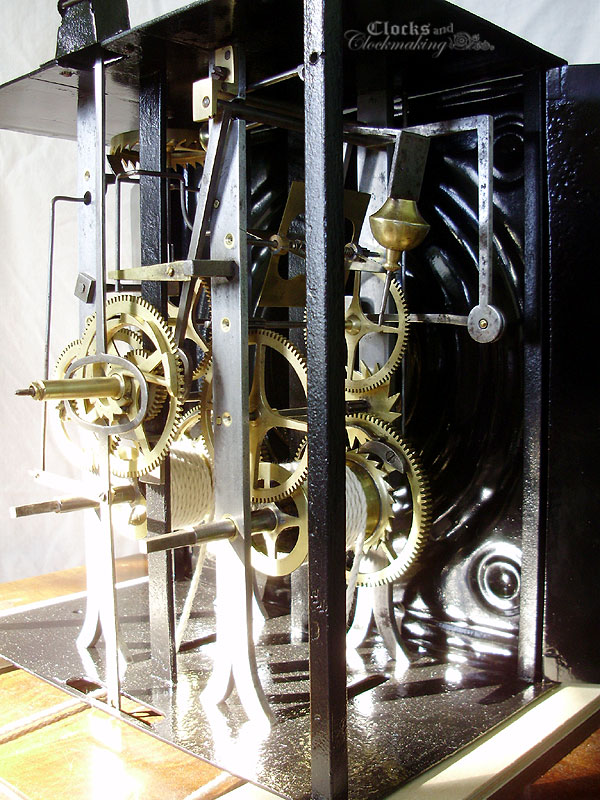 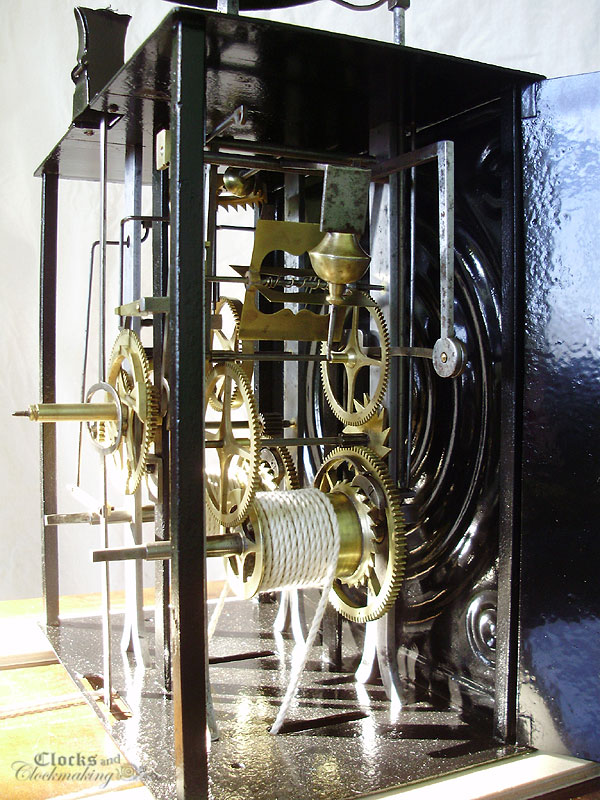 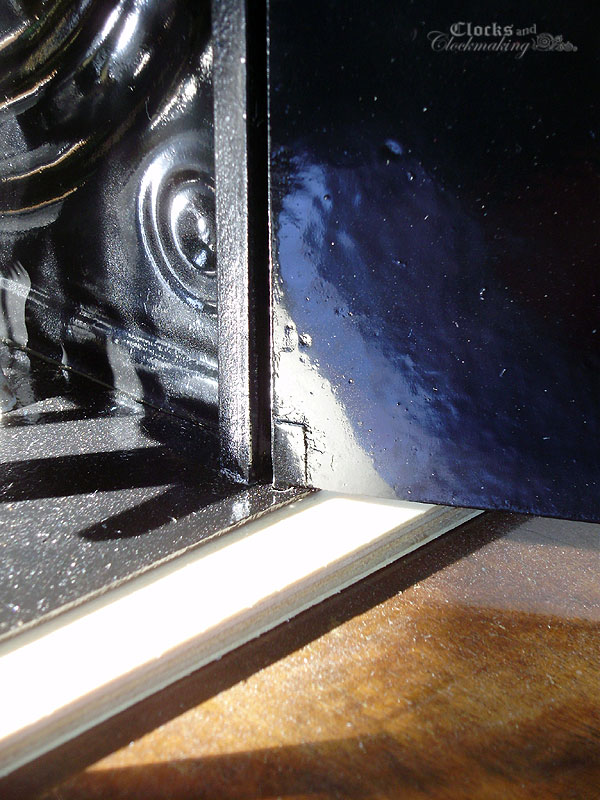 One very nice detail that I photographed separately is the decorative (and very fine) turning on the crown wheel support. The minute hand is shown for size comparison. 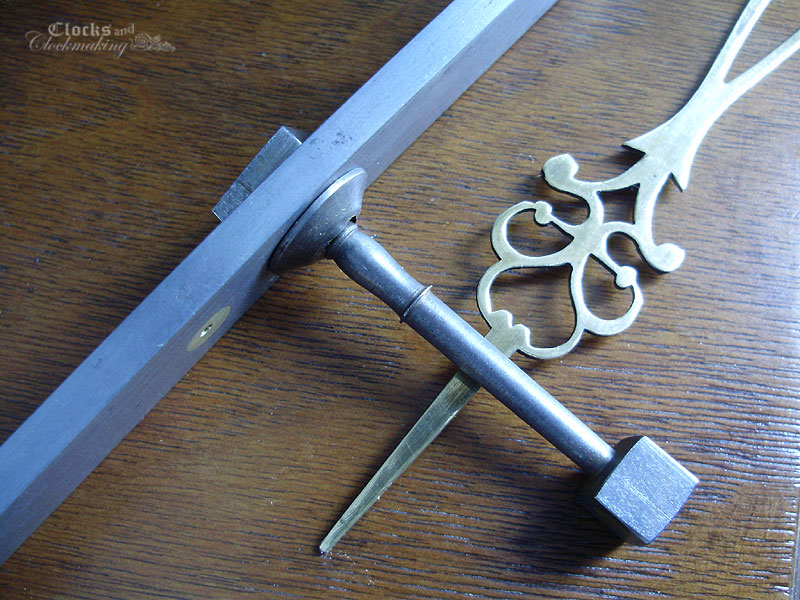 Bell, with a small bit of rust, and showing the new leather washers. 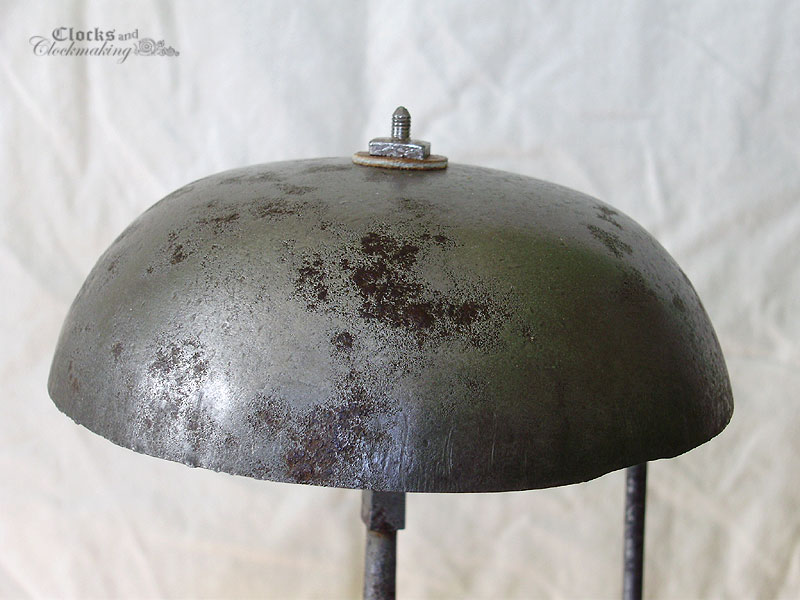 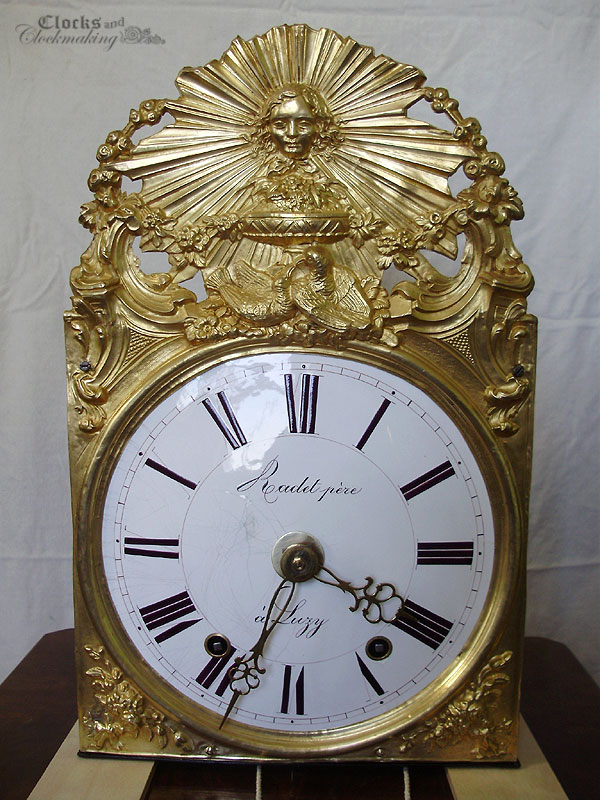 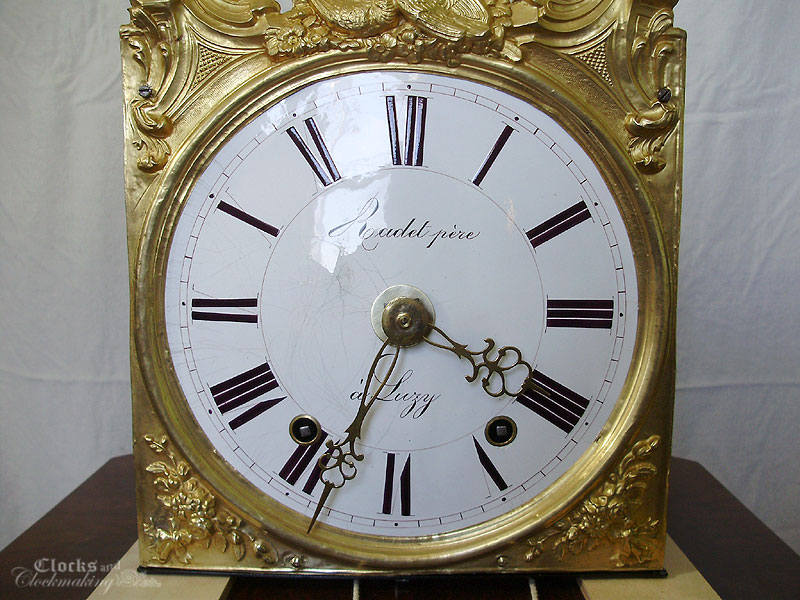 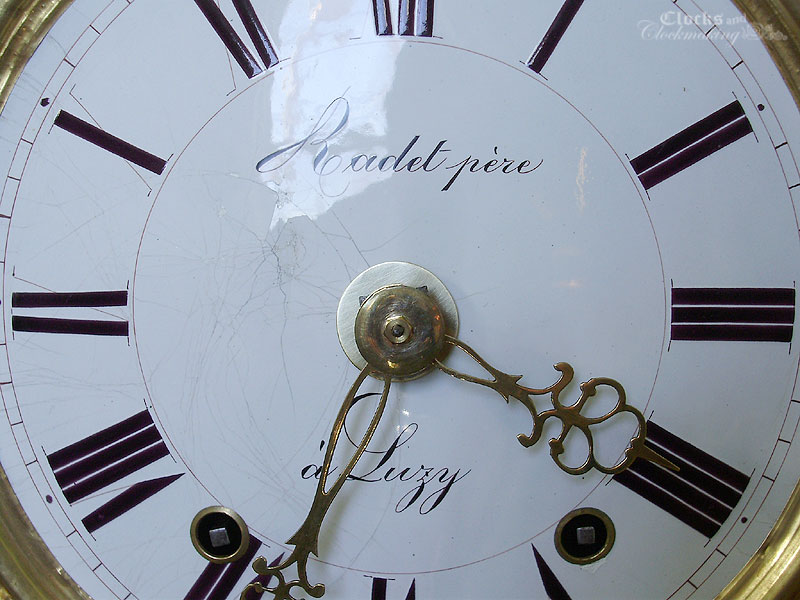 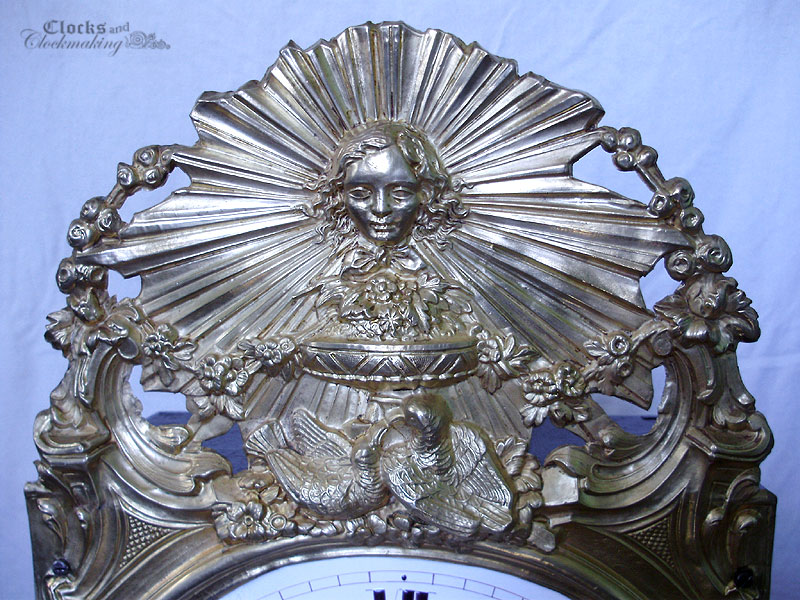 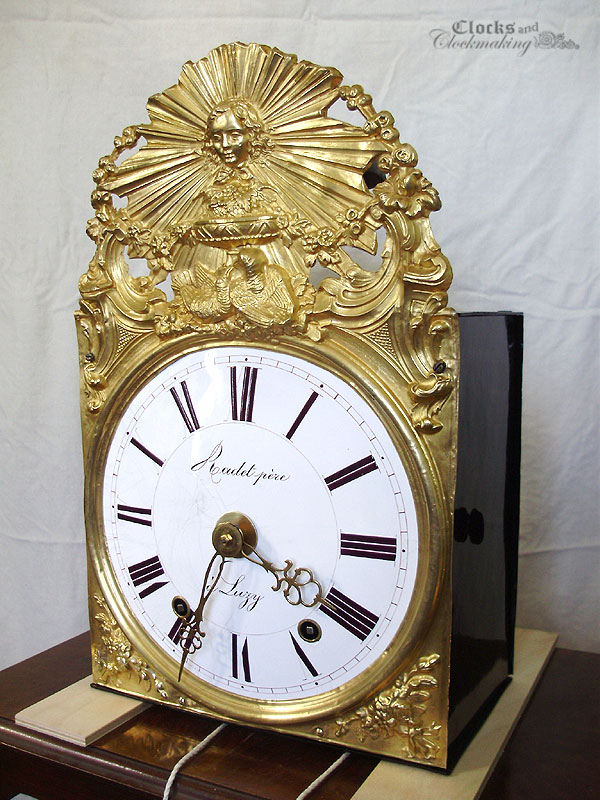 Beautiful and rustic original weights, and the key. 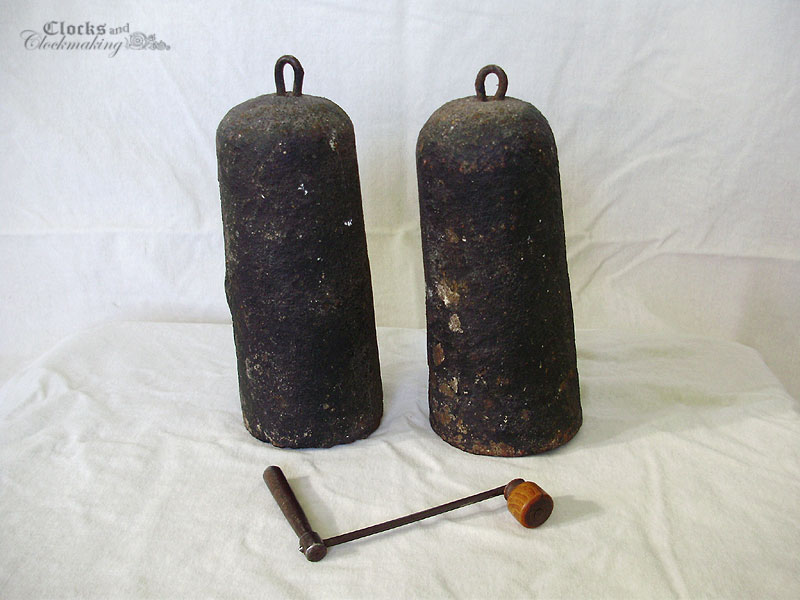 Pendulum. Likely a later replacement. Most of the early comtoise clocks like this had plain brass bobs. 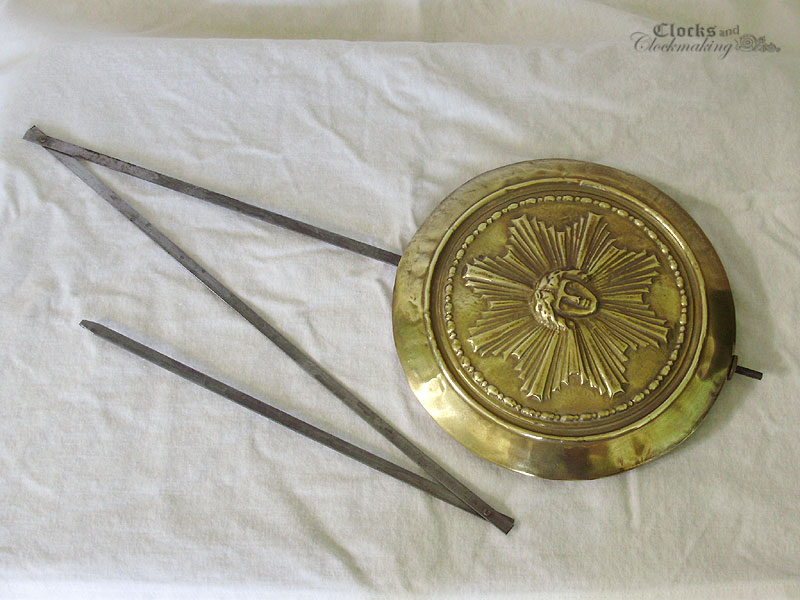 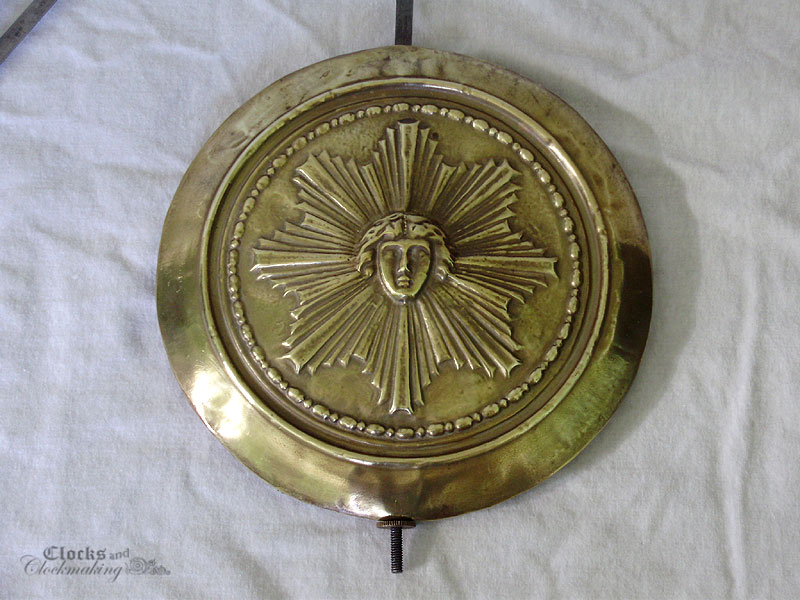