Alright, I've been dragging my feet when it comes to this particular blog, because I don't currently have much feedback on it. The beautiful Scottish longcase clock that I had been working on since February (2013) is finally finished, and set-up in the clients' home. I managed to have everything done and ready for them just before Christmas (about a week before).

One of the two blocks that I had glued into place was too short, and I had to remove it, and re-install a larger piece of mahogany.

I also really didn't like how this entire corner had turned out: 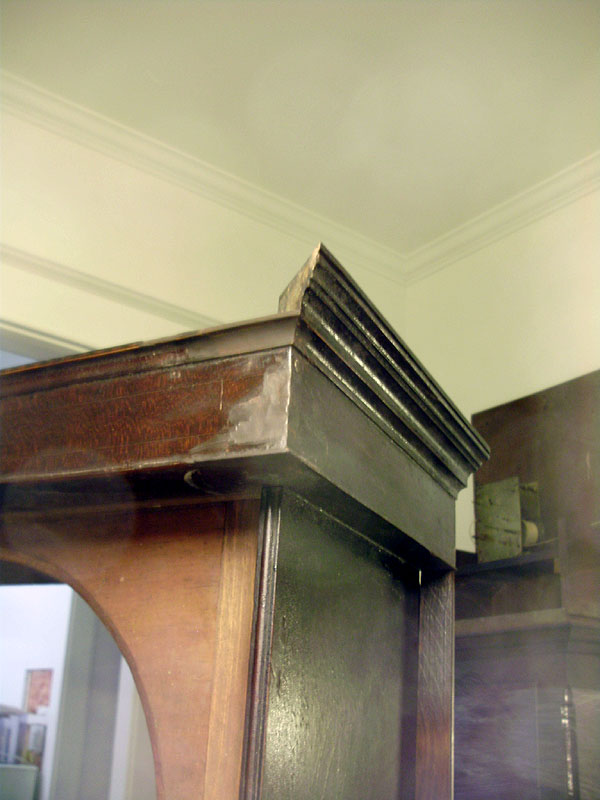 So I removed all the varnish, re-puttied it, and block sanded it completely smooth. New stain, and toned lacquers were added instead of the hand-brushed varnishes, which gave a far superior finish. But before I get to that, I first made the columns.

I wasn't really sure if my client wanted to spend extra money to cover the costs of the column tops/bottoms, but I decided to go ahead and order them regardless, since the clock hood simply couldn't go without the columns.

Column tops and bottoms for this style of "plain" post columns (based on photos and research) use the same parts for the top and bottom pieces. The originals on this clock were 1" square, but the closest available equivalents were 1 1/8" square with a 3/4" column.

I ordered these through Timesavers, and I was really impressed with the quality. They aren't cheap, but they are exceedingly well made. 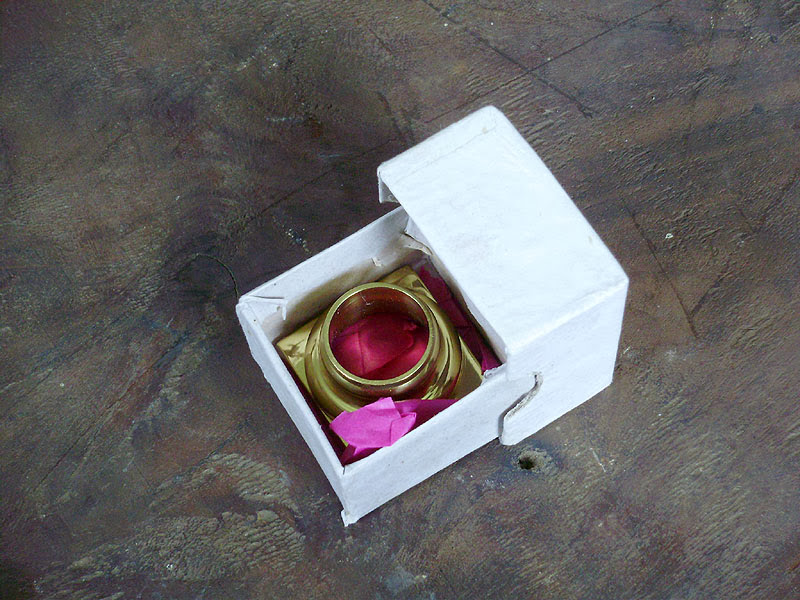 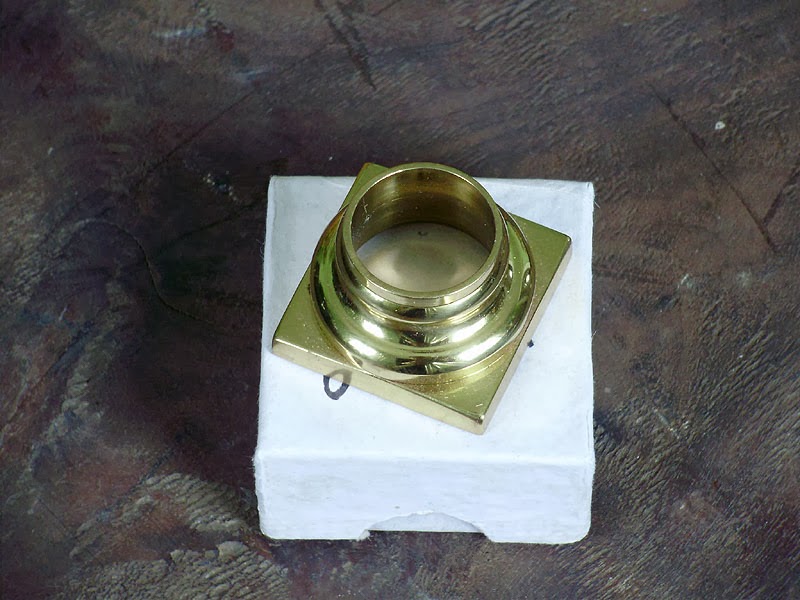 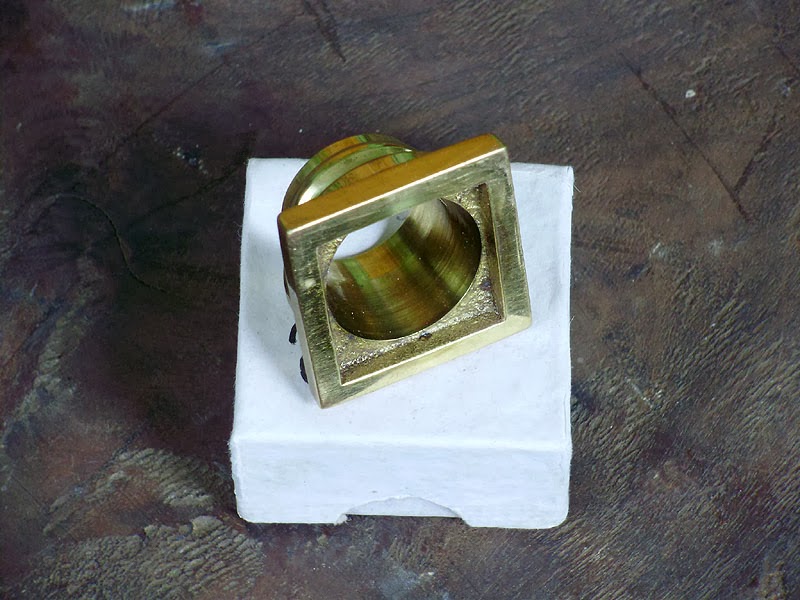 Rather than hand-turn plain blank columns, I simply used 3/4" hardwood dowels. I picked one that was as clear and straight as possible, and stained it a very deep mahogany brown. Additional toned varnish was added to get a near-perfect colour match. In this photo, they only have the stain applied. 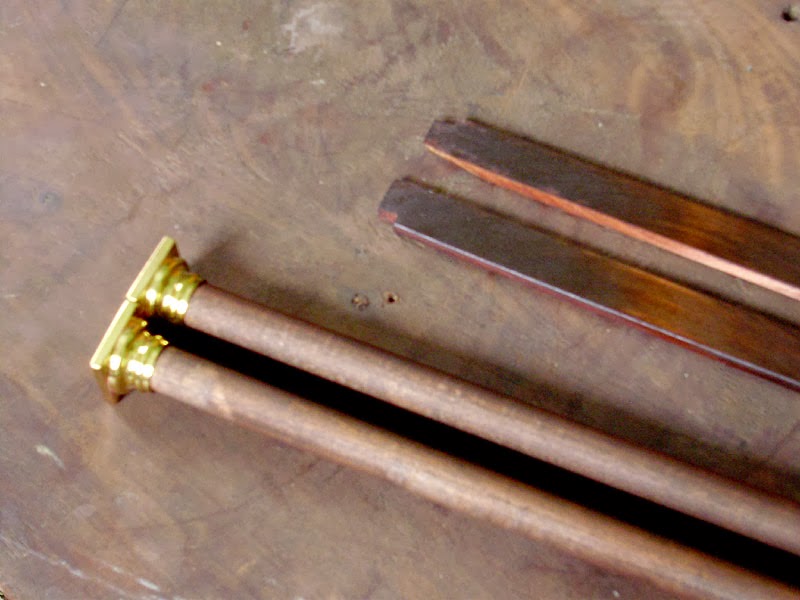 The brass column tops and bases came without mounting holes, so I needed to drill a pait of very small holes into them to accept some tiny steel finishing nails (smaller than 1/16").

Here you can see the re-sanded cornice, and the finished (installed) columns. 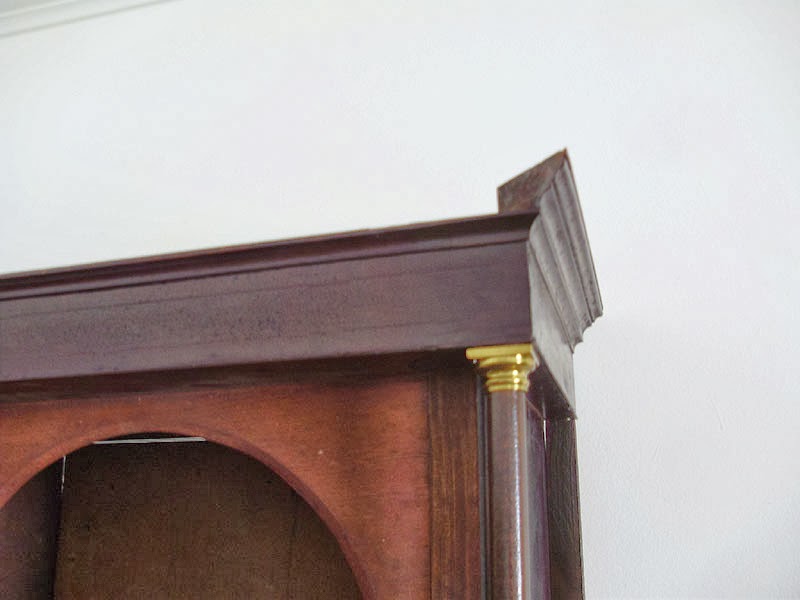 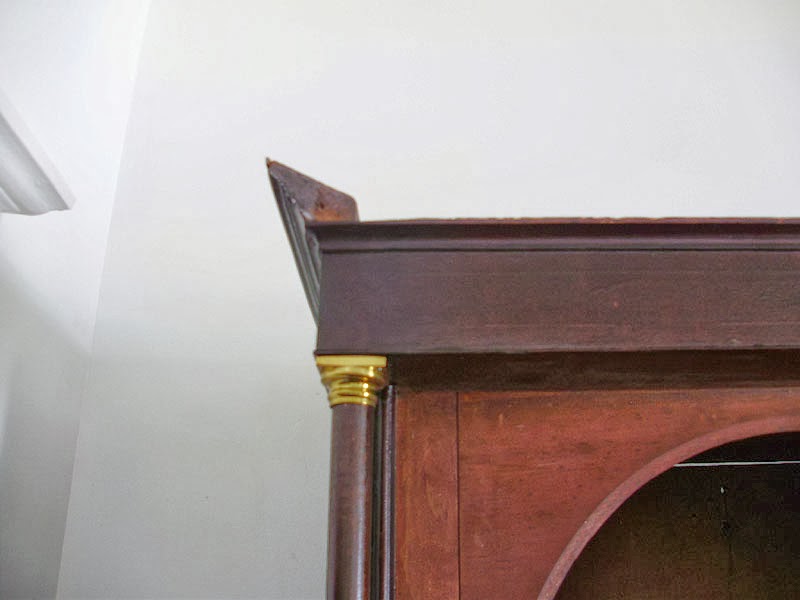 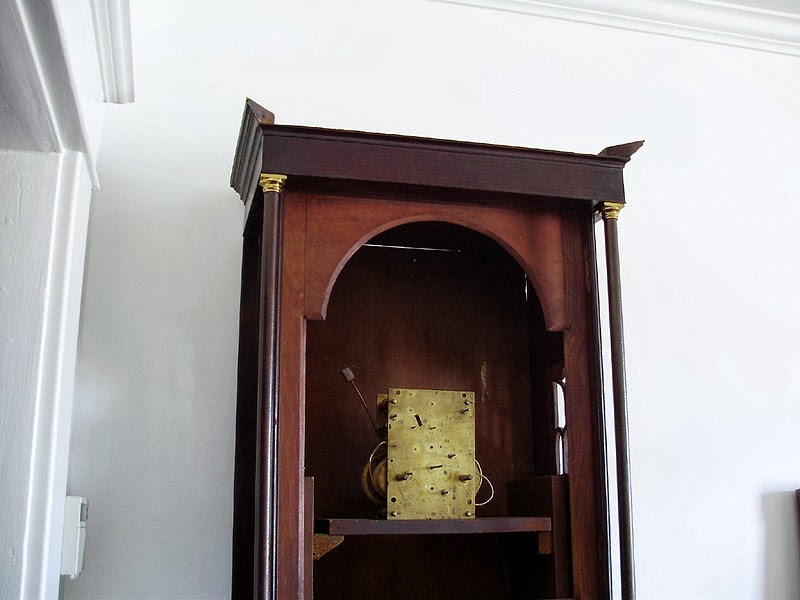 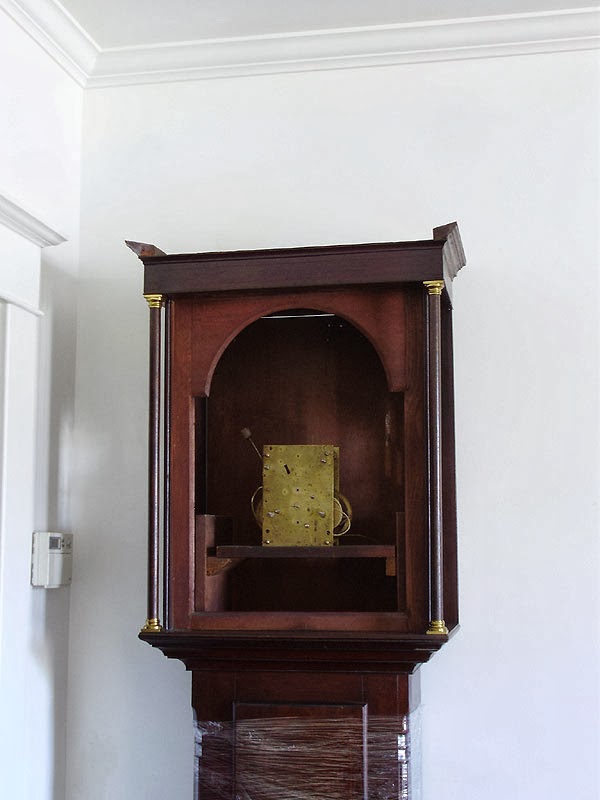 Before I glued the swan neck moulding in place, I needed to attach a reinforcing brace behind the break, patch the chipped chunks on either side of the break, and rough carve the corner patches. 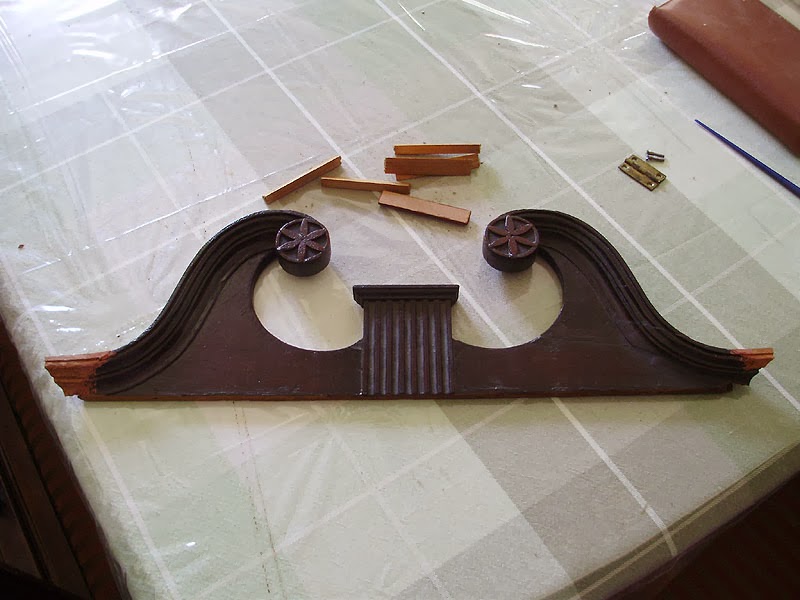 The original crest used 3 small square glue blocks, but I decided to use 5 triangular ones. These were patinated (with a vinegar and iron solution) before installation, then they were stained/painted to match. 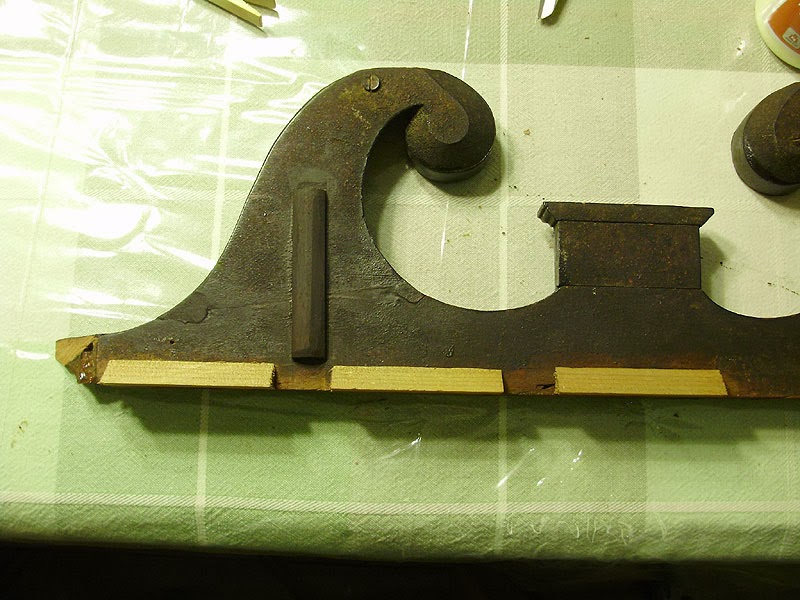 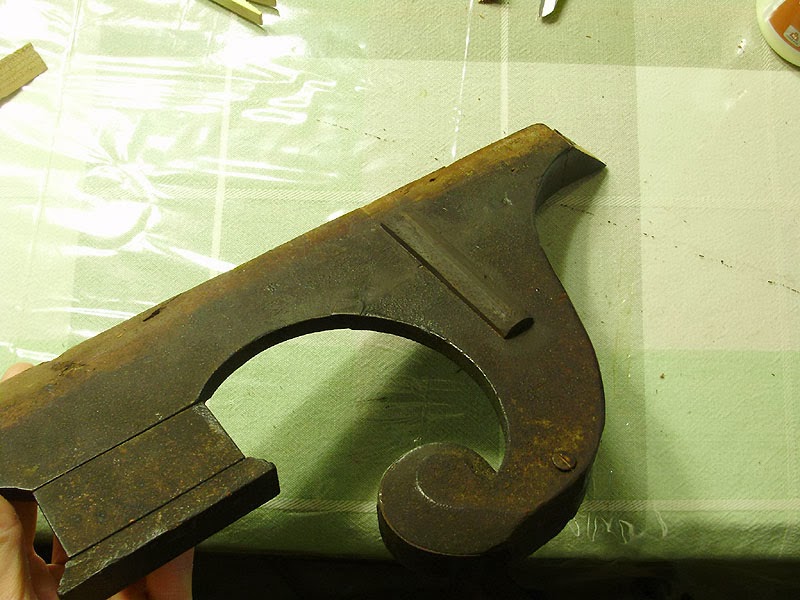 After the swan neck crest assembly was glued back to the hood with hide glue, and plenty of clamps (and left to dry overnight), the mahogany patches were hand carved, sanded, and cracks/small gaps puttied.

Note the large patched section of the cornice above the column, which is now nearly invisible. 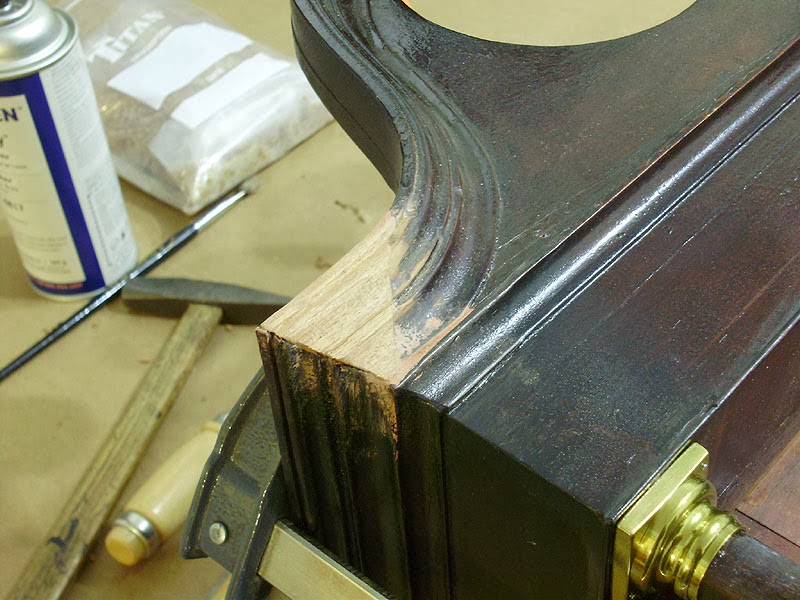 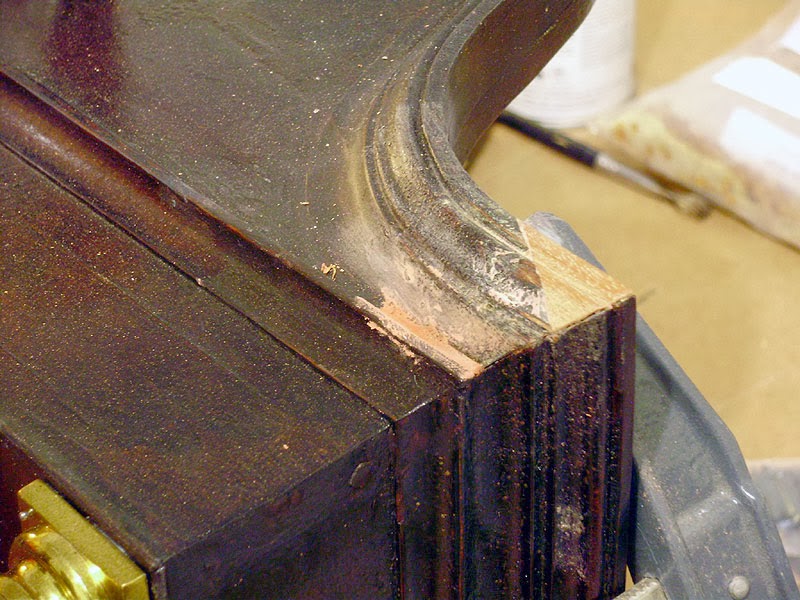 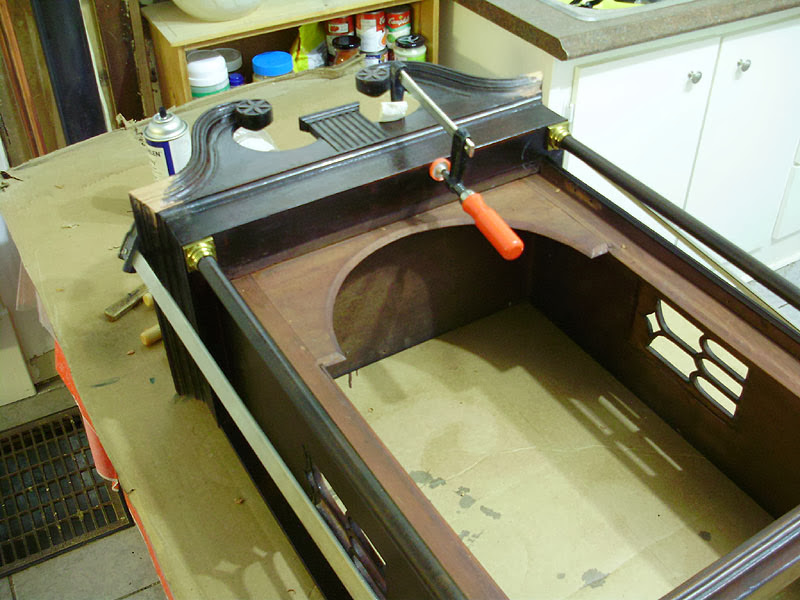 Stain, varnish, and coloured lacquer were used to blend-in the repairs. 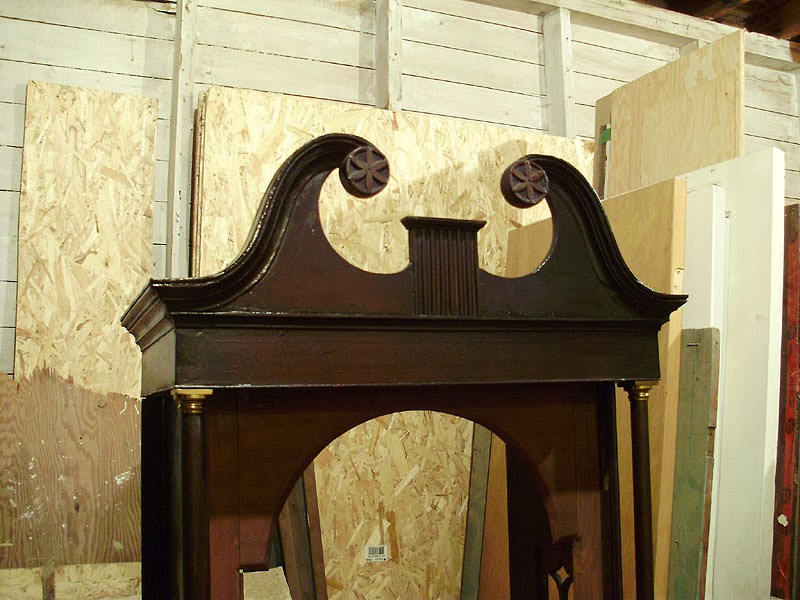 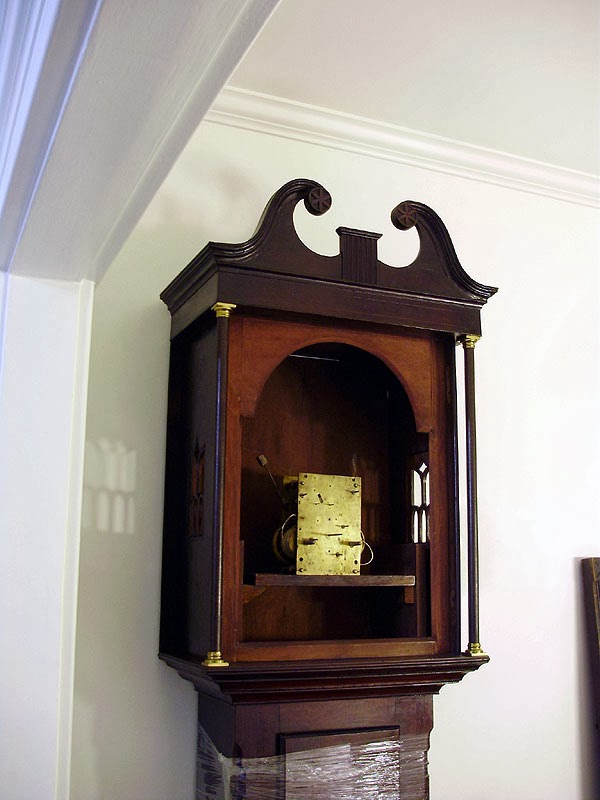 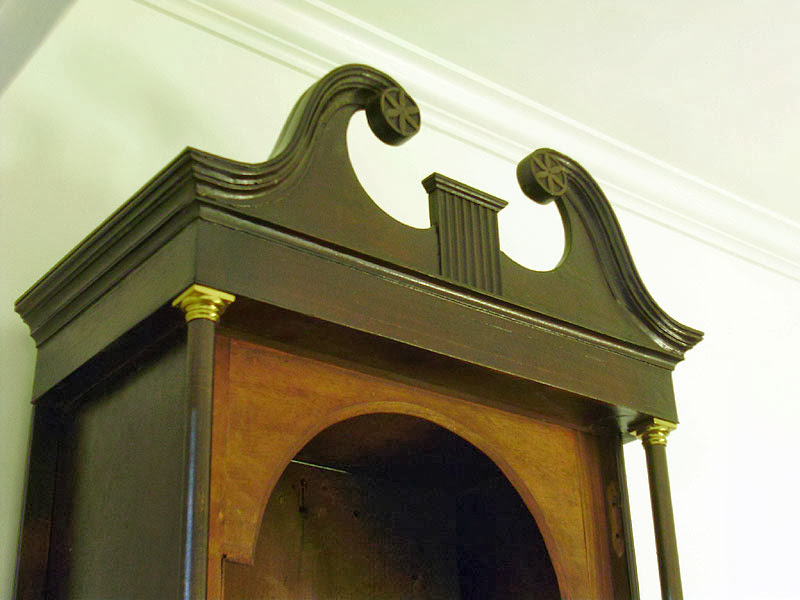 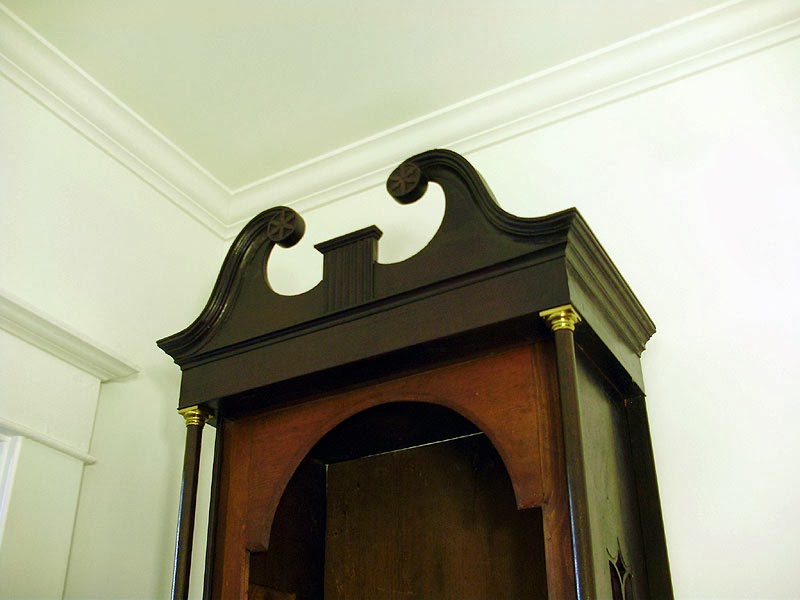 The next part (no photos) was to re-fit the hood door. The hood was reglued solidly as close to "new" as you could expect, however, the hood door had slowly expanded (slightly) in the joints, meaning that it no longer fit into the original opening.

Since the door had the original puttied glass in place, I couldn't take it apart to re-clamp it, and I couldn't throw it on the table saw either, because the vibrations could potentially shatter the glass.

To trim down the door, I had to do it carefully by hand using a hand plane, and a bit of sand paper. In the process, I discovered that the door appears to be made from Cherry, which I thought was incredibly unusual.

With the door carefully re-installed, and waxed on all sides to prevent rubbing at the top and bottom, I turned my attention to the movement.

As you may recall, most of the damaged components were already repaired, and I just had to clean the movement. You can see how dirty and dusty it was, as well as some of my cleaning routine, which involves keeping the individual levers and gears separate and labelled for easier reassembly. 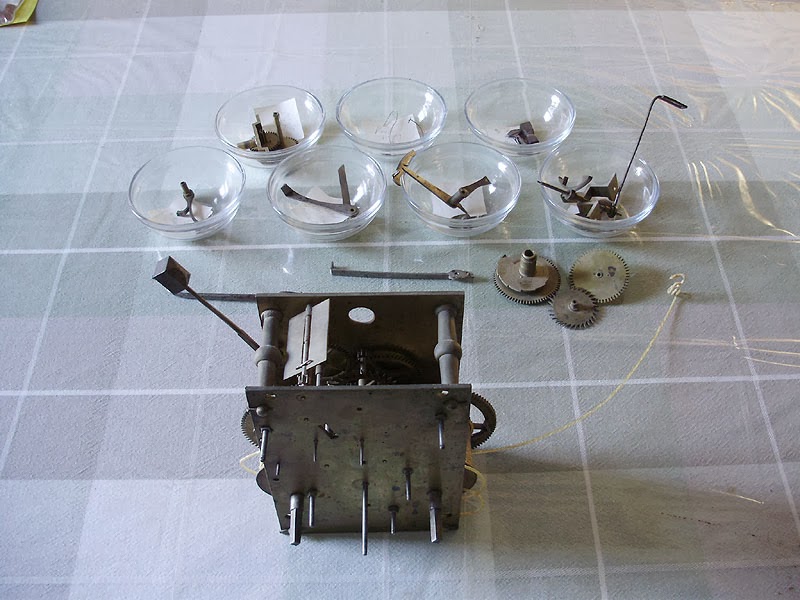 A lot of clockmakers chose to put different artistic twists on common pieces such as this beautifully detailed lifting piece (which raises the hammer for striking the bell): 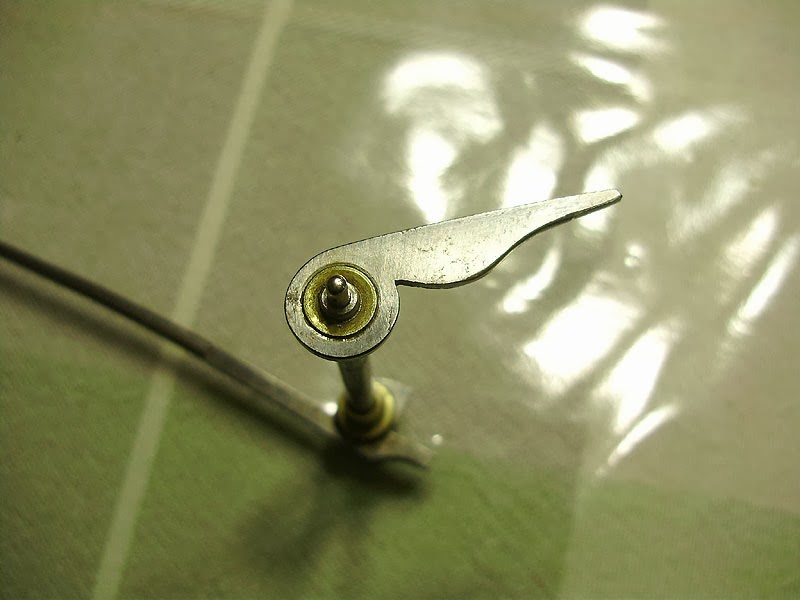 As well as these two gracefully curved pieces (the rack hook and rack): 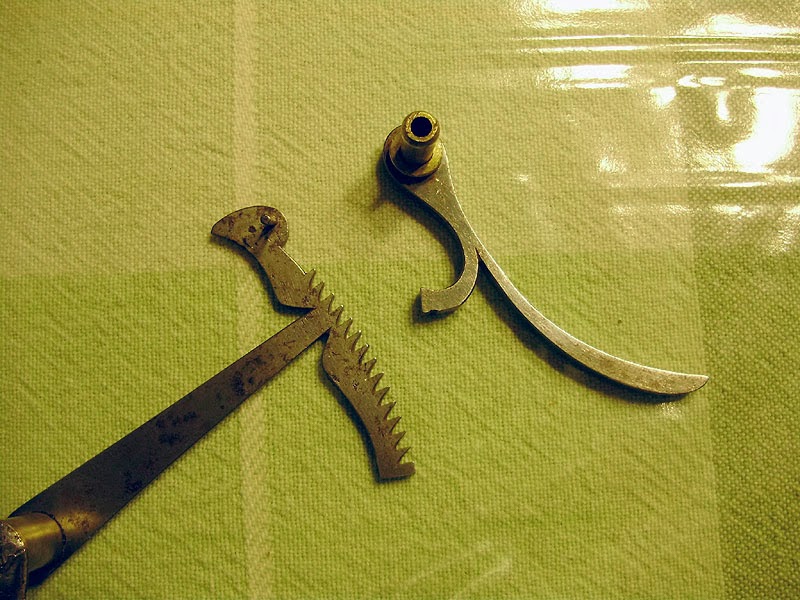 The movement has a few previous repairs, and I found this one on the centre wheel. It's a very ugly repair (for a broken leaf pinion) but it's very solid, so I left it as-is. I could have improved the repair but it wasn't worth spending one or two hours on it for a minimal aesthetic improvement. 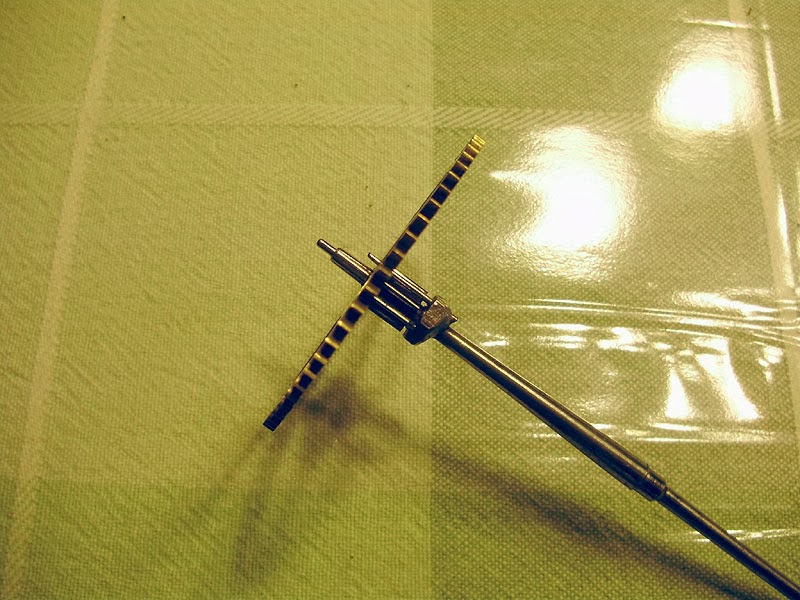 Another simple repair that I needed to do was to replace the broken pin on the calendar wheel. This pin advances the calendar hand on the dial by one tooth every 24 hours to indicate the date. 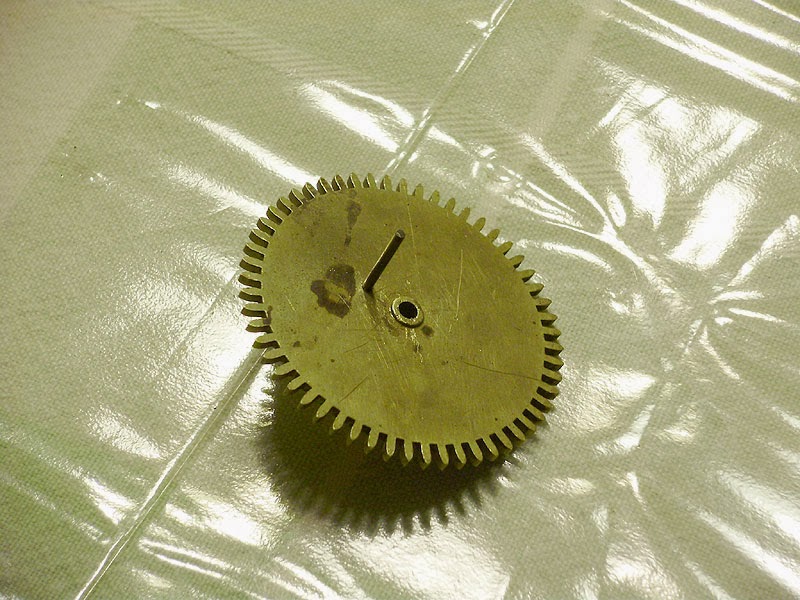 Here are two photos of the finished/cleaned movement on the original (repaired) seatboard. You may note two (less than perfect) existing repairs to the rack tail (solder) and the rebuilt gathering pallet. You may also see that the bell stand now has 2 nuts on it. This is because the threads on the bell stand are completely worn down at the base. 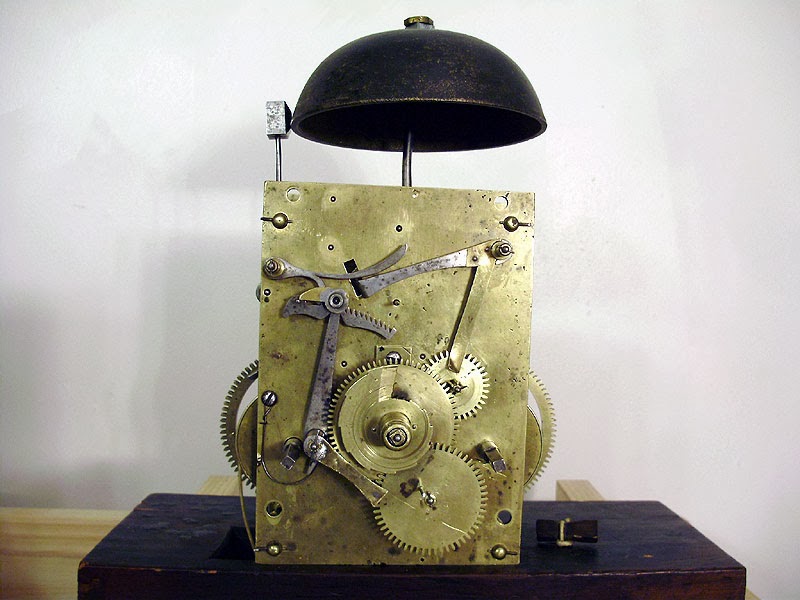 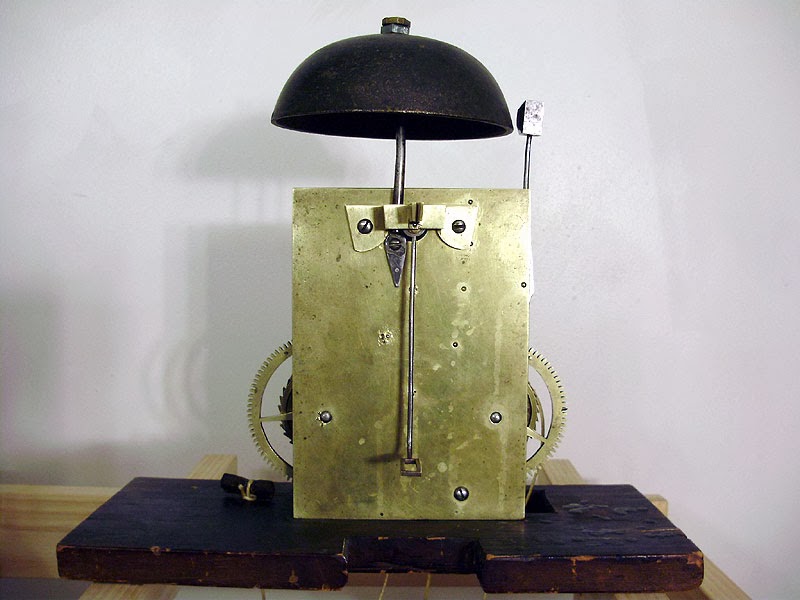 Lastly, here you can see the back of the finished hood repairs. All the glue blocks and patched sections have been antiqued to match the back and top of the case. 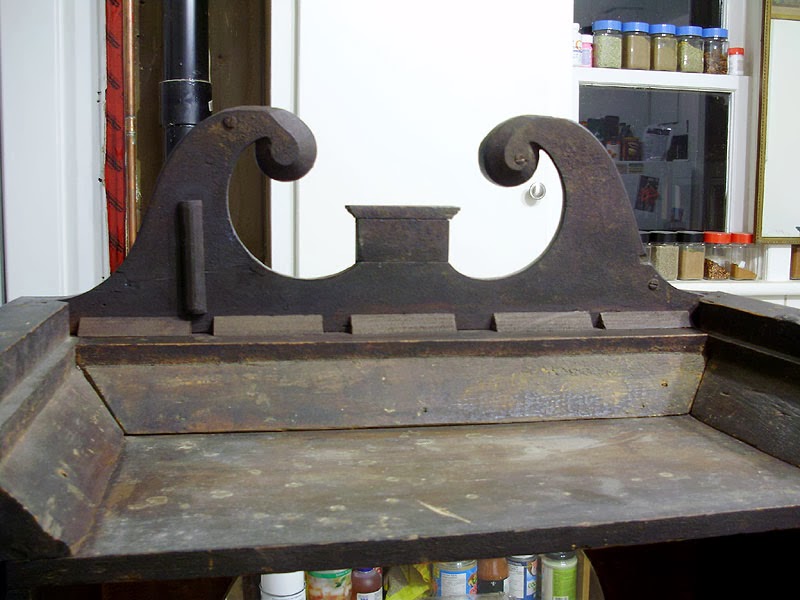 The next (and final) post about the Allan longcase clock will show the photos of the finished clock.
Posted by JC at 7:14 PM