Today's post deals with a whole bunch of clocks and clock parts I got today in exchange for some clock repair work. All of this came from the same man from whom I bought the 3 ogee clocks and the "Duane" mantle clock last summer. See this post: http://jcclocks.blogspot.ca/2014/06/clock-haul-4-new-acquisitions.html

Basically, if you'll recall, he had bought the contents from a retired (or deceased) clockmaker, and he had kept all the clocks he wanted, sold many others, and then all of this was basically all the leftovers that no one else wanted.

In total, I walked out with 5 full boxes. 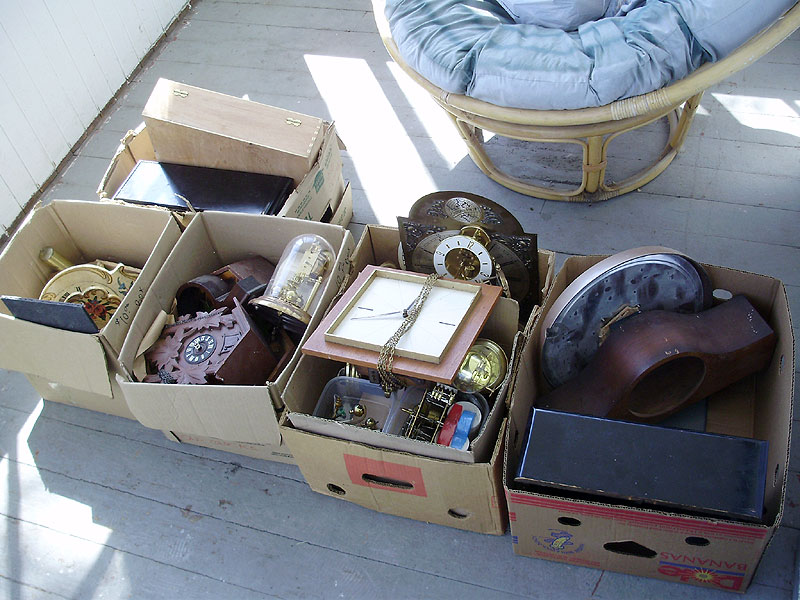 With everything unpacked, sorted, and laid out, it equaled to a full dining room table's worth of stuff. 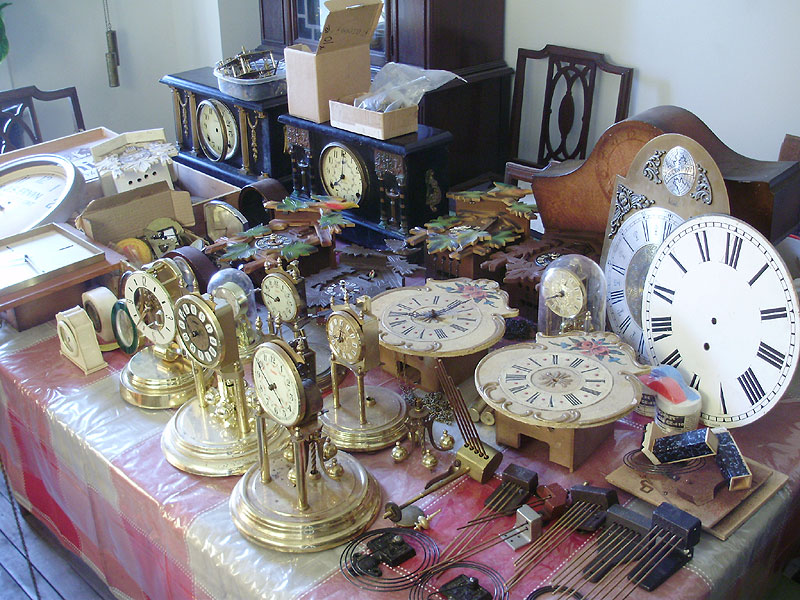 A lot of this is junk, however. For example, most of the anniversary clocks are missing hands, domes, pendulums, suspension springs, and have scratched or otherwise damaged bases. One is even missing all 3 adjustable feet. Another is missing several mounting bolts and screws. One is cheap plastic, and will probably go right in the trash after I cannibalize anything worth saving from it (screws, knobs, brass parts, etc).

Then there's the two matching "Black Forest style" shield clocks. One is complete, with weights, hands (no pendulum), but the second one is an empty case, with a fair amount of wood chewed away from the box by an animal. 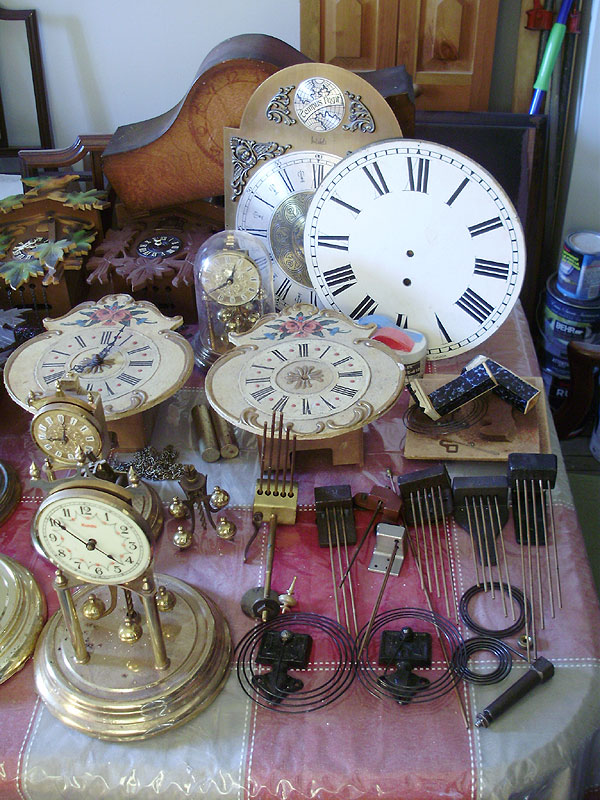 The gongs may be useful to have, and what's nice is they all have the original bolts and washers with them.

Several of the cuckoo clocks are nice, but only ONE of them is complete. One is missing the crest, and only one of them has the pendulum. Another is missing the back/gong. I believe I have all the weights and chains, and they all have their movements. Most are missing their hands.

The orange wood mantle clock in the upper left is an empty case, but in one of the small boxes, I have the complete movement for it (in pieces - all of it is there) but no dial, no back door, and I don't have the rods/block for it either. There's also 3 or 4 damaged teeth on one of the main wheels, and it's likely not worth repairing it. 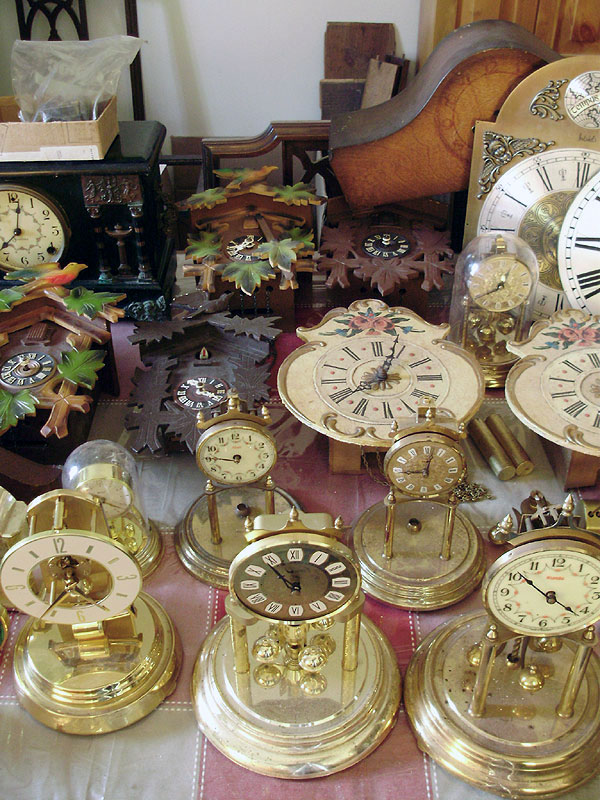 The back mantle clock (Sessions) at the back is 90% complete, and it's the best clock in the lot. It needs a glass for the bezel, and a backboard (and key & bob) but otherwise it's in good shape. 2 clocks ahead of it and next to the cuckoo is a rather nice silver rectangular-ish clock (or desk clock) in a very well made Art Deco case. That one is by HAC, and it has an unusual winding arrangement. I will probably keep that one. It runs, and it has uranium painted numerals and hands (glow in the dark). 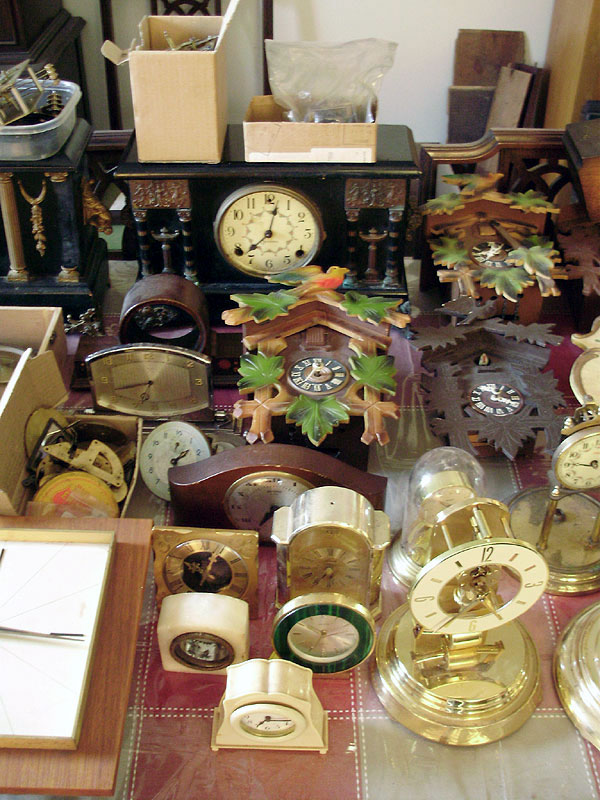 The second black mantle (Ingraham) is kind of nice, but it has no movement, no glass, and one of the columns is missing. Otherwise the case is complete (backboard and gong are there). The white cuckoo is an empty shell, and I have no crest or pendulum for it, only a pair of white-painted weights. I'm not even sure that the white painted treatment is original. I think someone just slapped some white paint all over it.

The square 70s looking clock is complete, but I'm missing 1 weight, and the pendulum (I think he said he had it hanging on the back wall and forgot to give it to me). 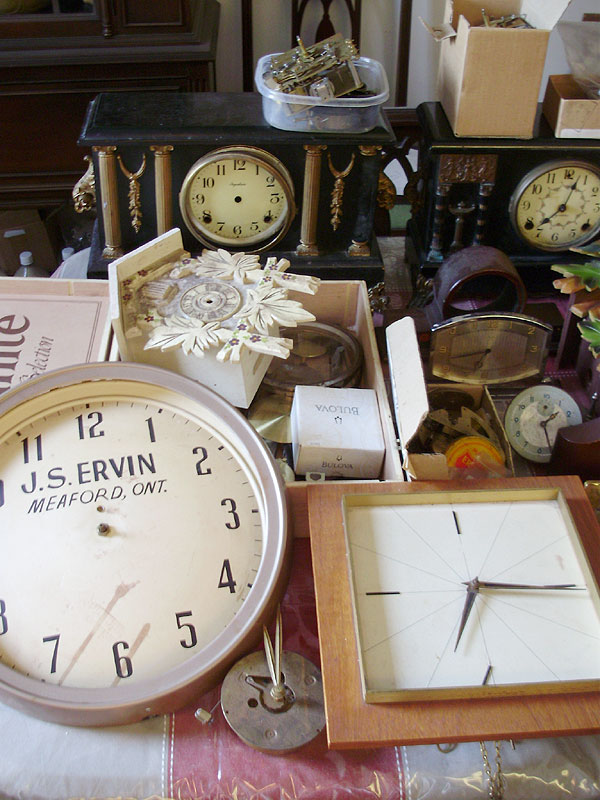 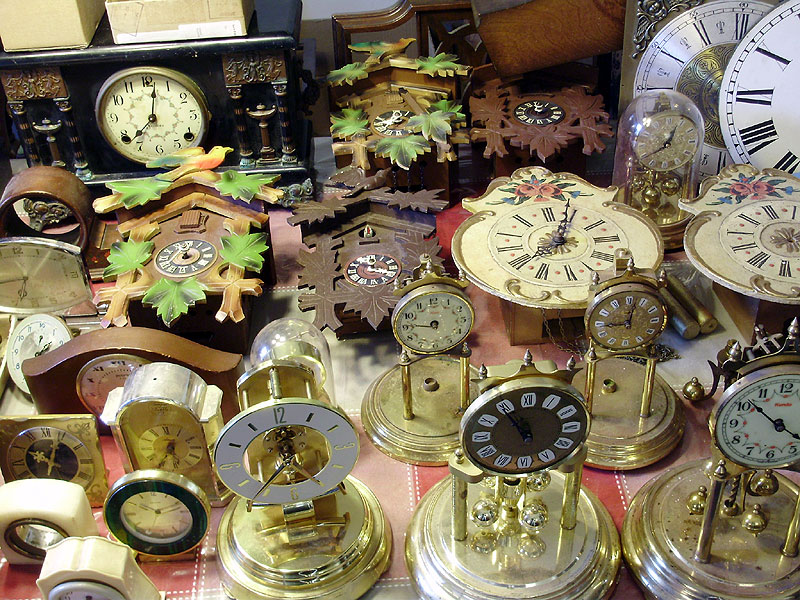 The plain white dial on the top right says Arthur Pequegnat (a very desirable Canadian clockmaker) but I have nothing to go with it. If anyone reading the blog is interested, it's very likely I'll be selling it. 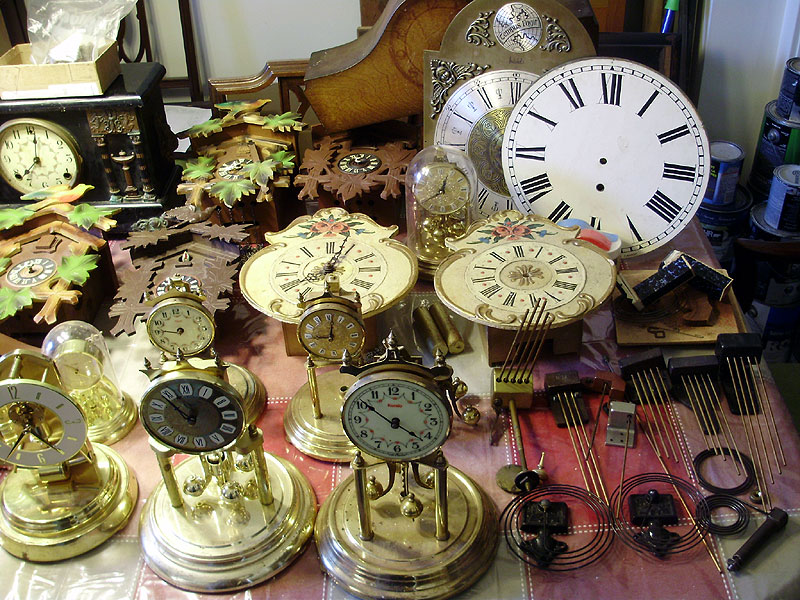 I also kinda like that white cellulose clock at the very front. It works and ticks VERY loudly. 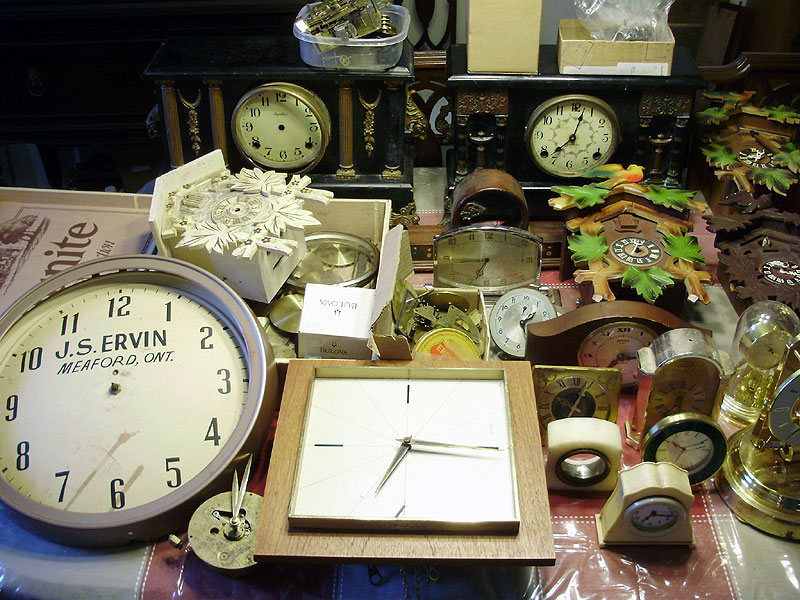 So that's it. I have absolutely no idea where I'm going to put all this stuff now.
Posted by JC at 5:52 PM