Making Your Own Custom-Tinted Glazing Putty

I recently did an antique window restoration job at work (we're primarily an upholstery shop, but we also do refinishing and occasionally antiques restorations and repairs). Having worked on these antique windows made me want to experiment with mixing my own putty for antique clocks. I've wanted to try making glazing putty for a few years, but I never got around to it until now. 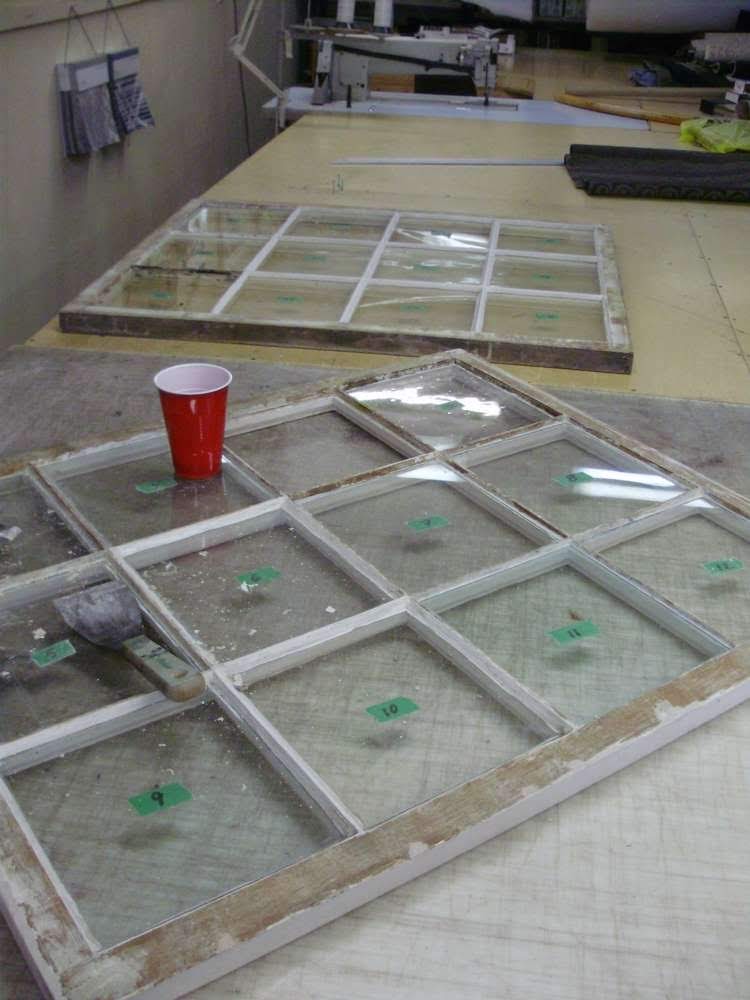 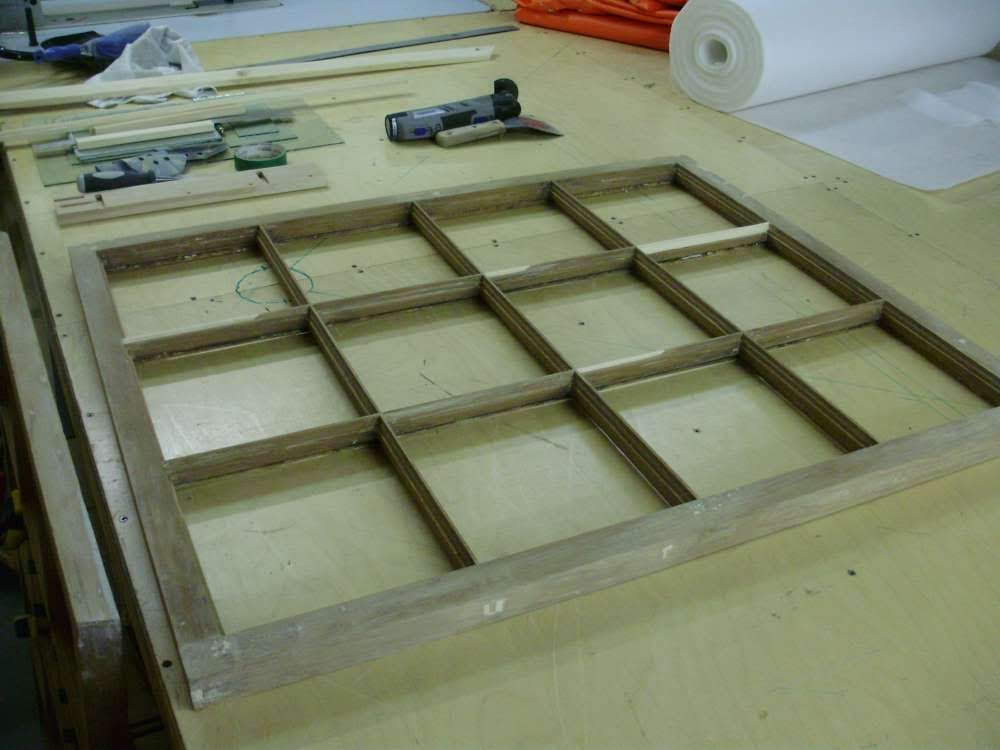 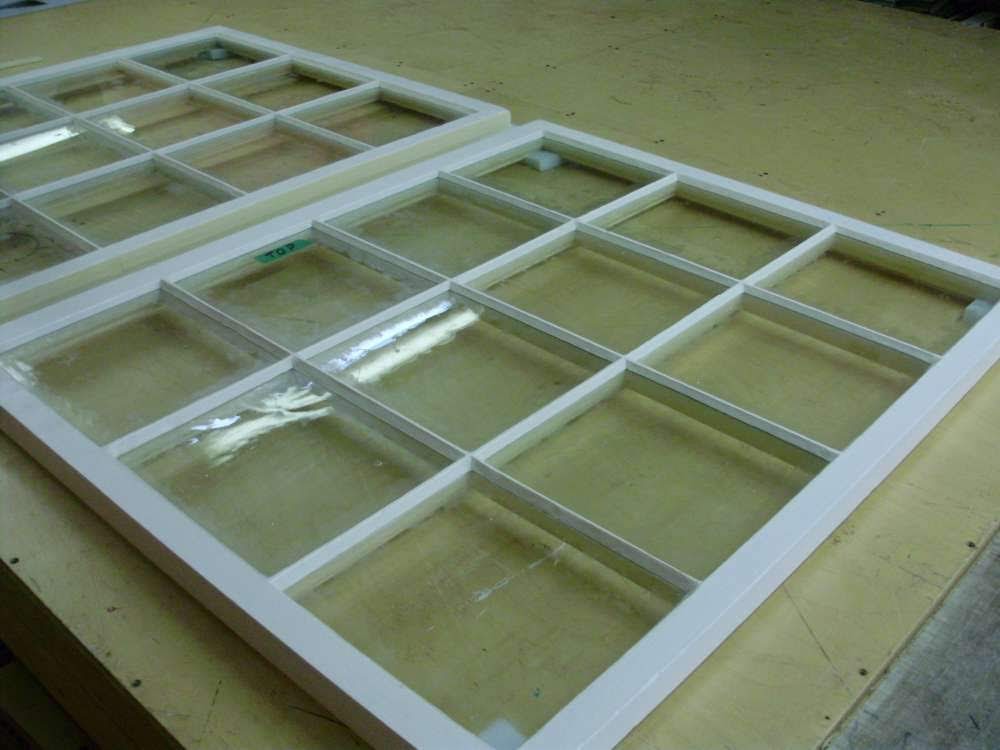 I generally prefer to leave putty out of a clock once the putty has failed, in favour of installing wooden strips. I believe strips are easier to remove and replace should the glass break again in the future. There are cases, however, where putty is the best option, and gives the best look. Mainly these will be on wooden works clocks from the early 1800s and on clocks up to around 1840.

One of the pitfalls of using modern putty is that the only commonly available glazing putty is either Dap33, or Sarco, which are both plain white. These can be used as-is, and then surface-painted to look old, but the original putty in early American clocks was originally a sort of brick colour throughout (ranging from light brown to a peach or red tone). The goal of trying homemade putty was to see if I could replicate the look of historic putty.

The basic recipe for traditional glazing putty is dead simple. There are only two ingredients: whiting (chalk/limestone dust), and linseed oil.

For my putty recipe (and keeping in mind that this was mostly an experiment), I used plaster of Paris instead of whiting. Whiting is one of those old fashioned materials that seems to be increasingly difficult to find these days. I've looked for several years and haven't come across any. I could buy some online, but with the price of shipping, it's just too expensive. Plaster of Paris is mainly gypsum dust (calcium sulfate). It is not the same as whiting (which is calcium carbonate), but both are stone dust, and I thought that for my purposes it would work about the same (which it did). 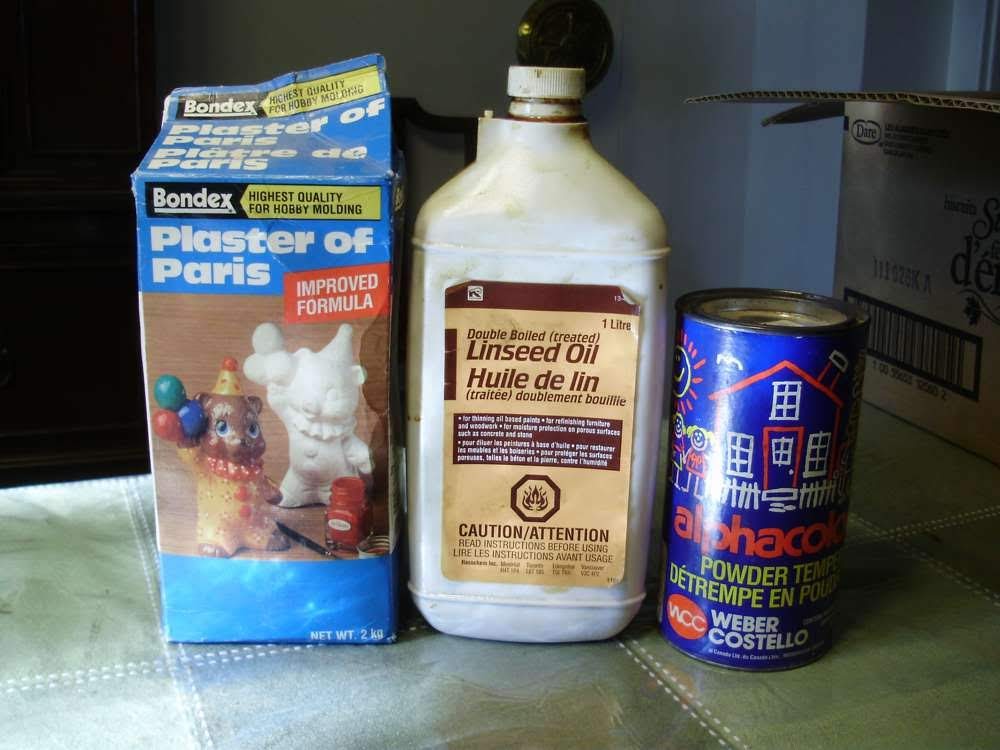 To colour the putty, I decided to use some powdered tempera paints. I came across a large box of these paints at a yard sale many years ago and I had never found a use for them until now. The main colours that I used were red, black, and brown. I also had yellow, and I did use a bit of green at one point to tone down the red. If you can't find tempera paints, you could also try coloured chalk or dry pastels (ground to a fine powder). I believe the putty could also be tinted with artist's oil paints (which are normally made from pigments in a linseed oil base), or with certain types of universal tints, but I have not tried these. 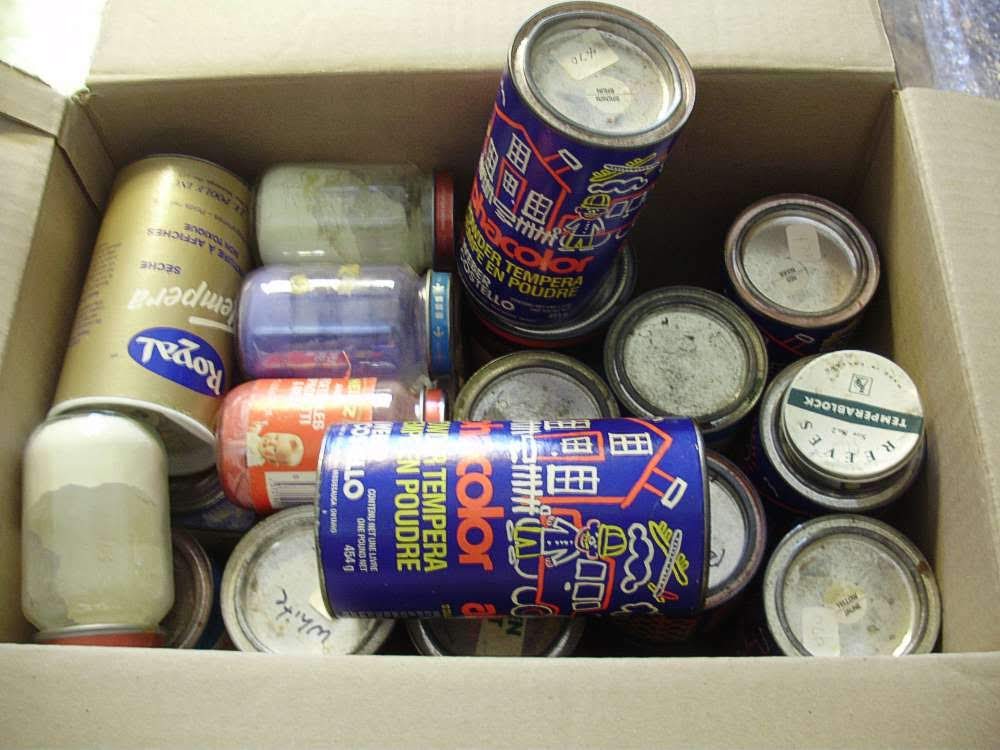 To mix the putty, I recommend using a small dish. Preferably a dish made of glass, ceramic, or metal. I used a small ceramic bowl. The easiest way to mix the putty is to start with a wet mix, and then gradually add more whiting or plaster until you form a stiff dough. I used about 5% tempera paint powders, and roughly 10-20% oil to powder ratio (this is just a very rough estimation). You want to begin mixing your putty with a small spoon or a popsicle stick, and then knead it in your hands towards the end. Knead it very thoroughly. 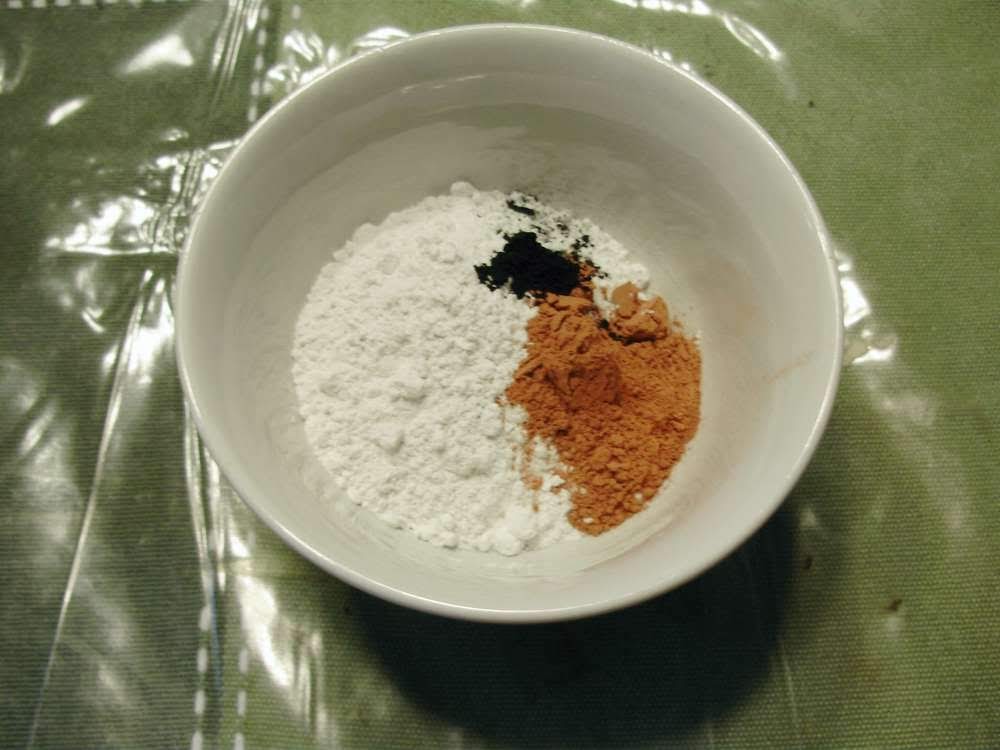 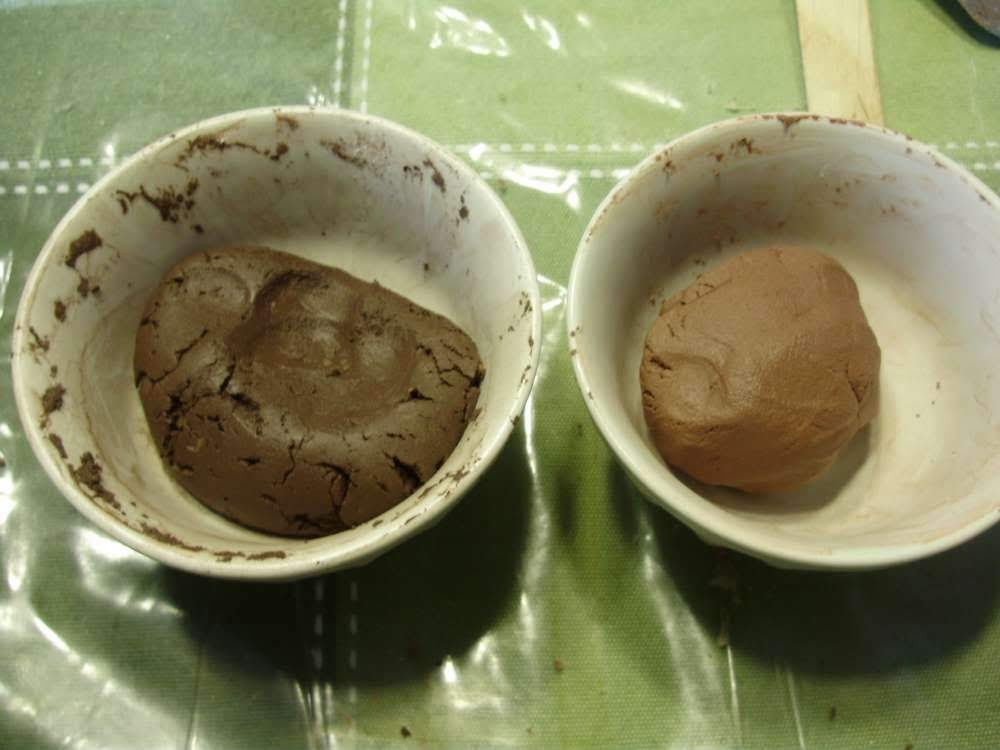 I was able to mix 3 different colours to do three different clock doors (matching the existing putty colours). I reglazed the dial-glass doors on a C. & L. C. Ives triple decker, and on an E. W. Adams wooden works clock case. I also made patch repairs to missing sections of putty on the lower door of the C. & L. C. Ives clock.

Lower tablet glass from C. & L. C. Ives triple decker clock ca. 1835. The top and left sides were a bit orangy-red while the bottom and right sides were dark brown. Photographed before drying: 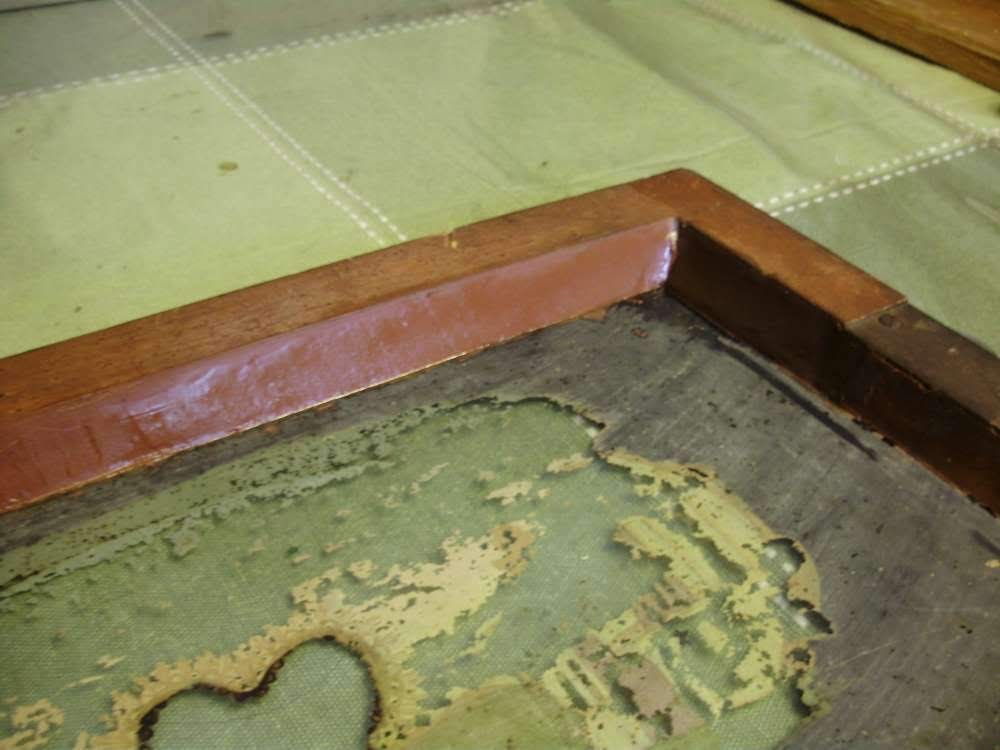 Half these areas are original putty, with missing sections filled-in. It's nearly impossible to re-form a perfectly smooth line. 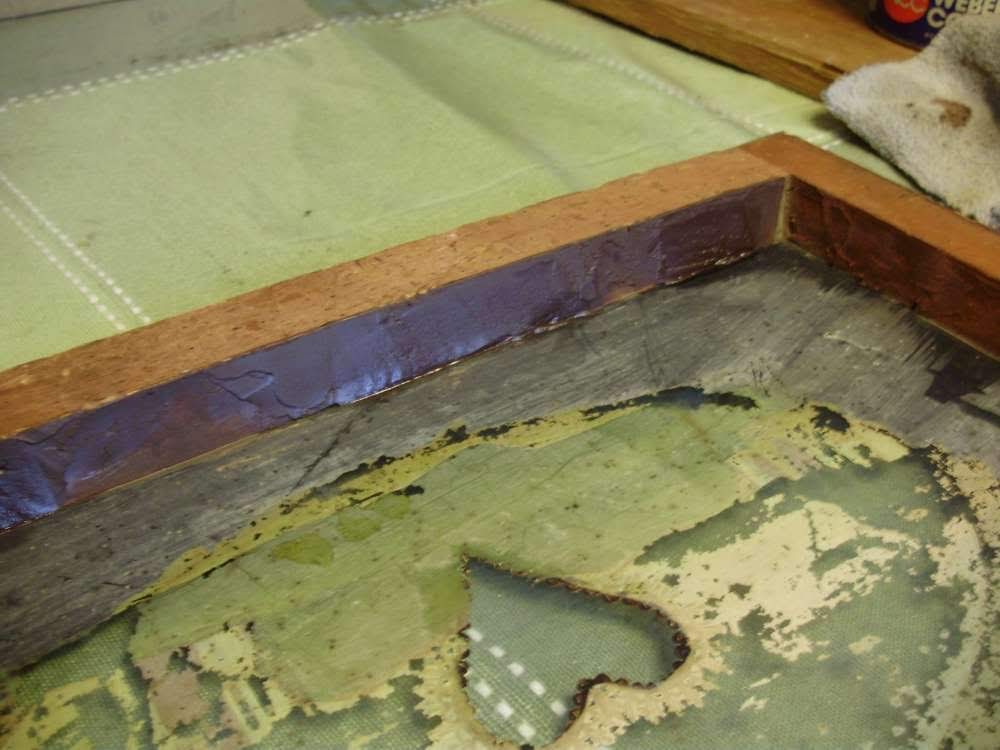 Incorrect modern glass was replaced with wavy glasses in these two dial glass frames from a C. & L. C. Ives, and an E. W. Adams wooden works. The colours were matched to the original putty. One dark brown, and one brownish-red: 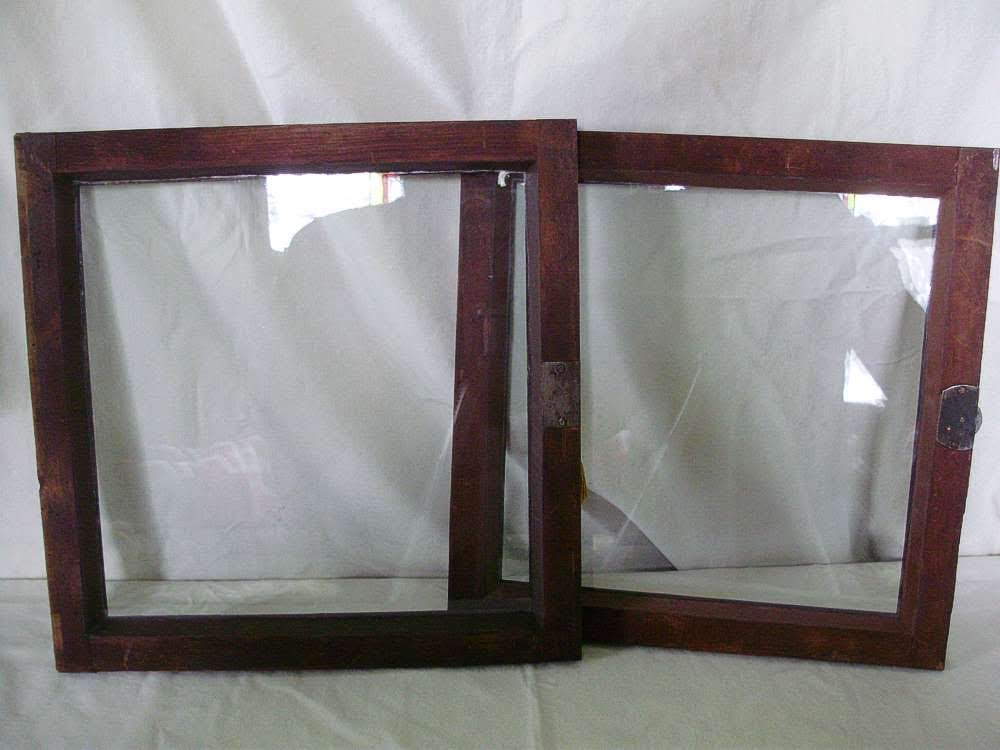 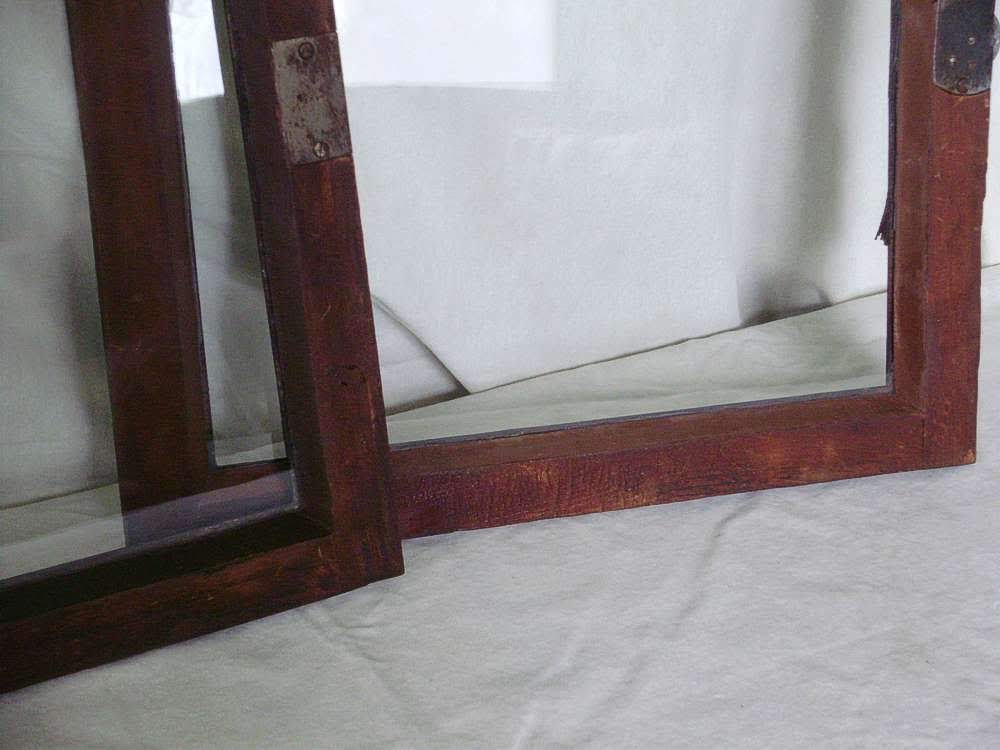 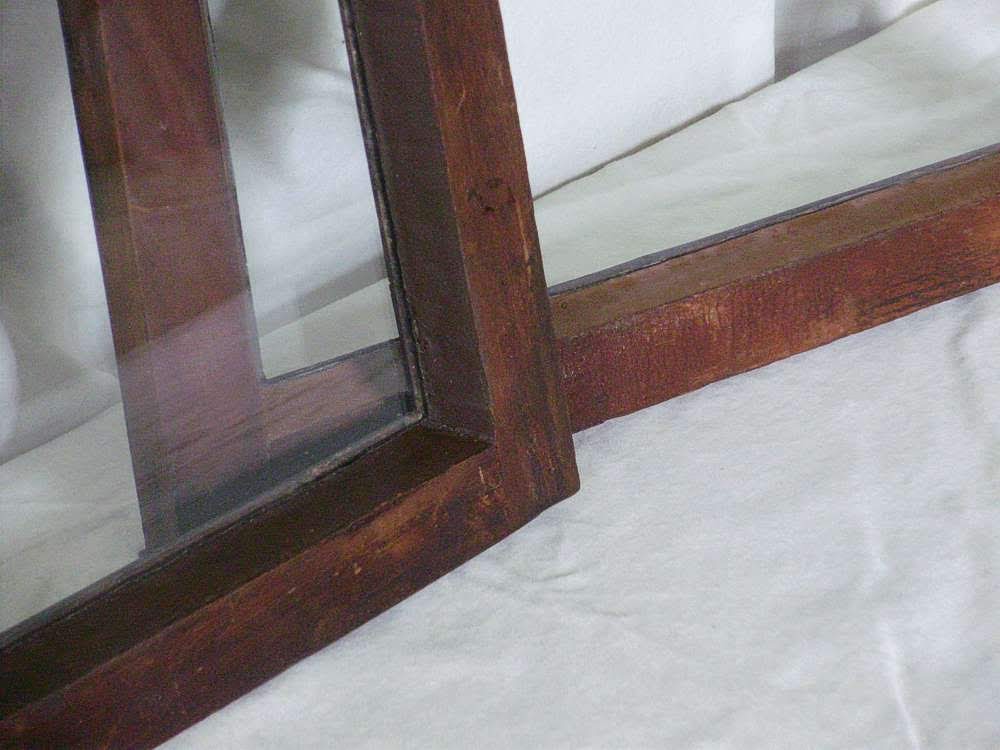 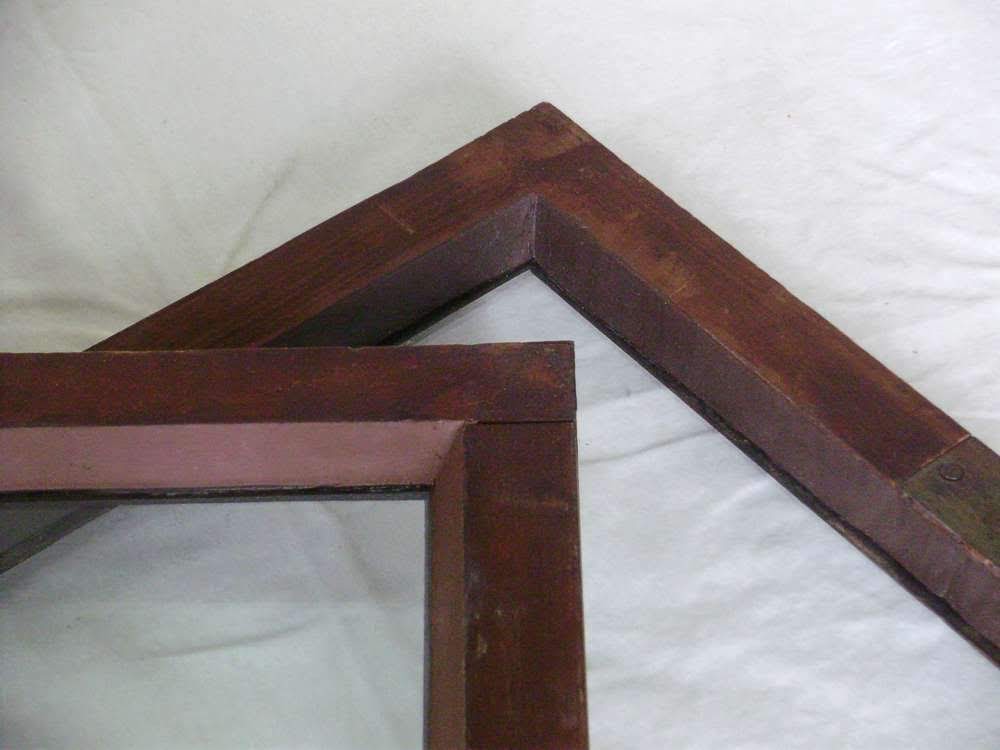 The finished results far surpassed my expectations, but there are several additional notes I wanted to mention about the whole process. The first I will mention is the application. If you have worked with commercially prepared glazing putty, you'll see pretty quickly that the home made putty has a completely different texture. Even if you can mix it pretty thick (which I recommend - about the consistency of modeling clay), it will smooth itself into the frame much more smoothly than commercial putty (a bit like icing) and it will appear more glossy at first.

One VERY important thing to consider with this putty is the drying time. You MUST wait for the putty to surface-dry before you attempt to clean any excess putty or smudges on the glass. The fresh putty is extremely soft and easily damaged (like icing), and if you happen to touch the putty when it's only partially dry, it will form a soft oily spot, and it will start to puddle in that weak spot. If this happens, do not attempt to touch the putty any further, and simply set the panel in such a way that the wet spot can lay horizontally to continue drying. The putty in my sample glasses took 2 weeks to dry enough that I could clean the glasses. It's worth the time to just wait and leave the putty to dry. Yes it's slow, and yes it's tempting to want to rush the process, but trying to force the putty to dry more quickly could potentially cause cracking or other problems. A heat gun will also not help dry the putty, because it's the tool that's used to soften and remove old putty. Heat has the effect of further softening dried putty.

You will want to keep in mind that the colour of the wet (freshly mixed) putty will not be exactly the same as when it's dry. It will lighten by one or two shades as it dries. The change is not extremely drastic, but you do want to mix your putty just a bit darker than the final colour you want to match. You also want to start with a bit less pigment than you might think (you can always add more).

The last note I'll share is that once the putty is dry, it can be carefully and lightly sanded (if you have small bumps or screw-ups), and it can also be painted or stained if you need parts of it (or all of it) darkened additionally. I used a glass scraper and a paper towel with denatured alcohol to clean the glass and the extra putty bits (after the two weeks).

Lastly, here are a few pros and cons to making your own custom glazing putty:

Cons:
- Messy
- Slow drying and curing time (2 weeks minimum)
- Tricky to apply smoothly (I used the back edge of a 1" chisel, and there's a bit of a learning curve)
- Excess putty can't easily be stored once it's mixed (discard or find a very tightly sealed plastic container)
- Oily linseed oil rags pose a fire hazard*

* Oily linseed oil rags are a serious fire hazard because linseed oil can heat-up and spontaneously combust as it dries (you can see videos of this happening if you don't believe it), especially if the rags are clumped up. To dispose of the rags, it is suggested to keep them in a container filled with water, OR to lay them flat on a fireproof surface (cement floor/driveway) to fully dry (2 weeks). Alternatively, you can burn them in a fireplace or fire pit.
Posted by JC at 5:22 PM