Apparently I've forgotten all about this series (there will be at least 3, maybe 4 parts to this clock restoration), so here is an update on this clock (which is currently finished and running quite nicely).

The previous part 1 is here:
http://jcclocks.blogspot.ca/2016/02/rosewood-seth-thomas-thomaston-ogee.html

The only part of this clock that I had posted about so far was the restoration of the movement. This is a somewhat in-between to late model Seth Thomas ogee. It has a Thomaston label, but a Plymouth Hollow movement. I would guess that it's as late as the 1870s. This would mean that it would have a decal style glass (fairly detailed/printed). Probably flowers or a Victorian style scene. However, I wanted to install a somewhat earlier stenciled tablet. They are nicer to look at, and they look more convincing that buying a reproduction tablet from a supplier.

For this tablet I dug into my Fenn Stencil books and picked out a design that I've seen used on Seth Thomas clocks. I've seen this pattern on column and cornice clocks. It is also similar in style to a few other patterns of the period. The nice part of this specific pattern is that I had photos of a popular colour scheme for it which looked quite nice. Largely dusty grey and red. 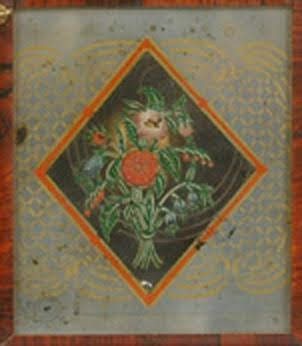 A similar tablet in black and gold: 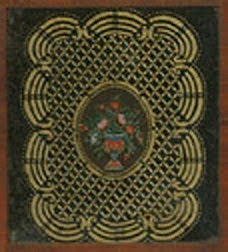 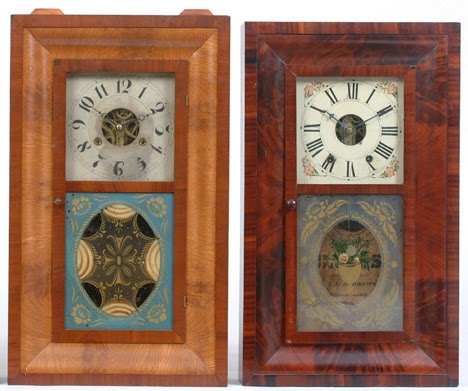 This is more or less the exact tablet I wanted to copy (as far as colours go): 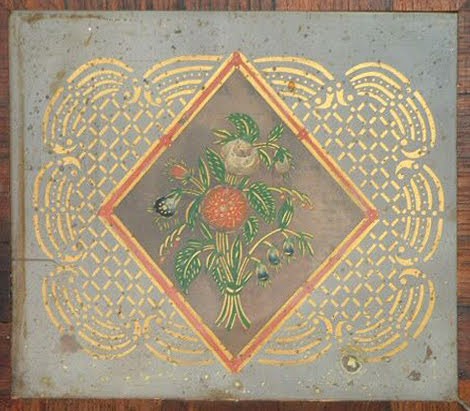 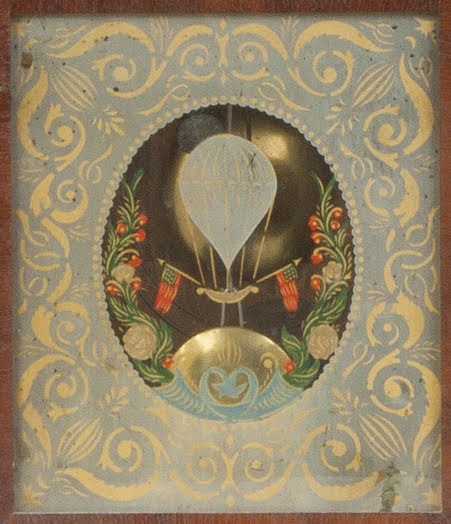 I cut all my stencils from chemical-proof plastic. Anything that won't melt or dissolve in lacquer thinner. I have used thin plastic file folders as well as Mylar for this. This was actually a stencil that I had already cut a few years ago. Initially the size of the pattern was a bit smaller than I wanted, but I assumed it would look alright. I went ahead and stenciled the glass with bronze powders using my usual method (see Mirror Clock Project). 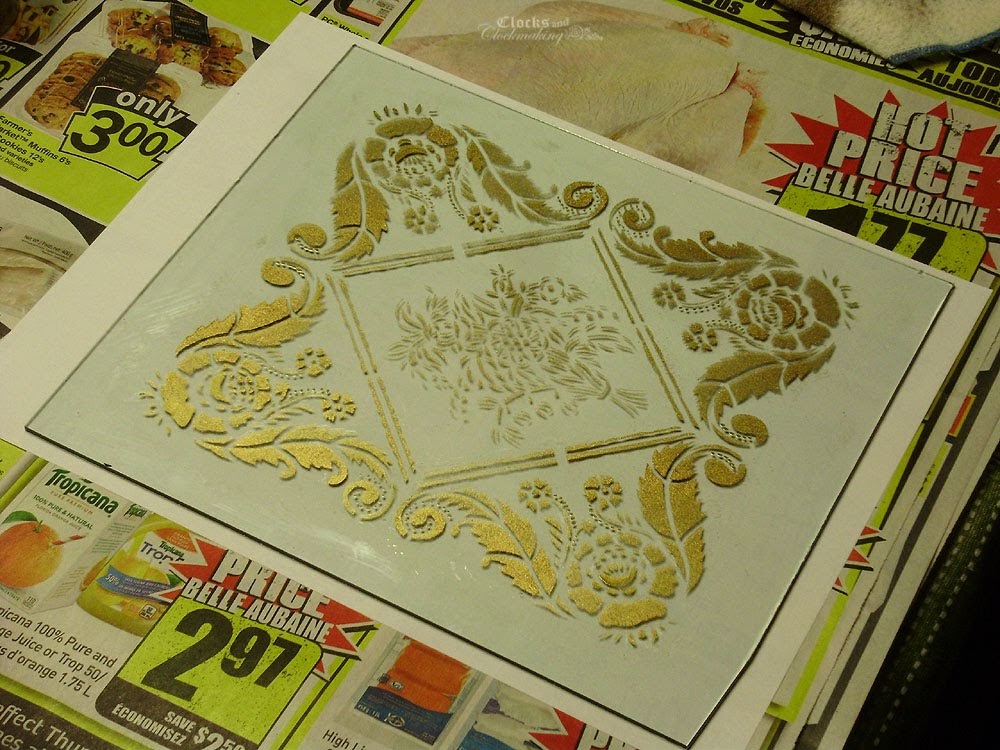 The finished glass didn't look TOO BAD, but I hated how the blue-grey turned out. It was far too blue, and too bright. 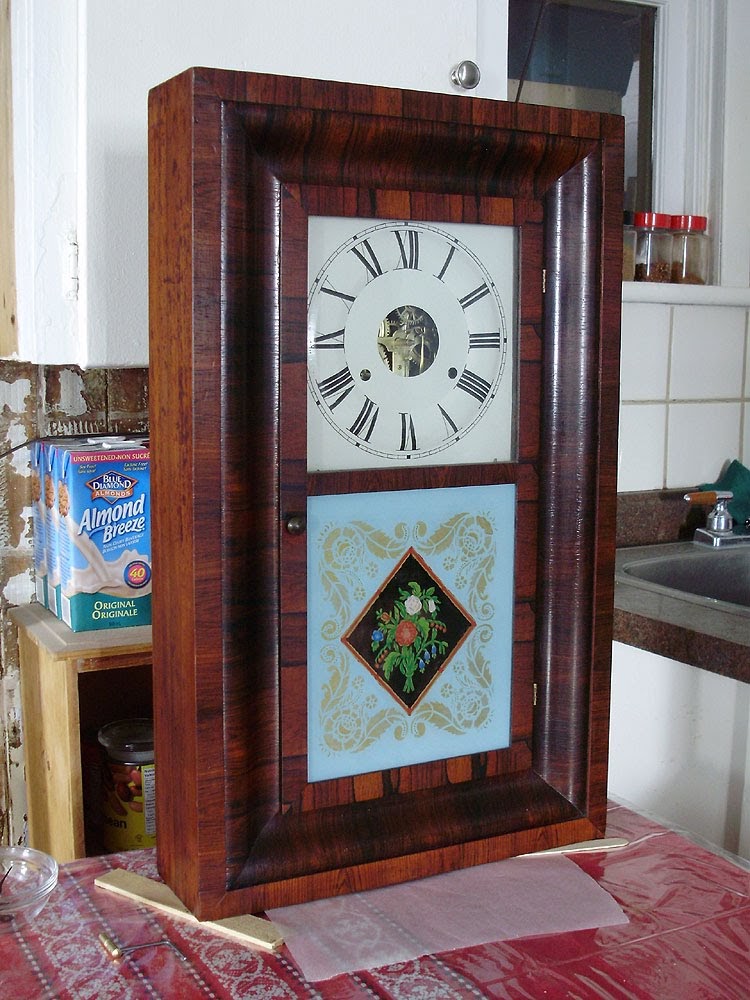 I decided to scrap it and restart. I took the glass out, stripped all the paint off, and I decided to enlarge the pattern also. These patterns are incredibly tedious and difficult to cut, so on something like this I actually only cut HALF the pattern, and I stencil it in 2 parts. All tiny dots are painted in freehand. 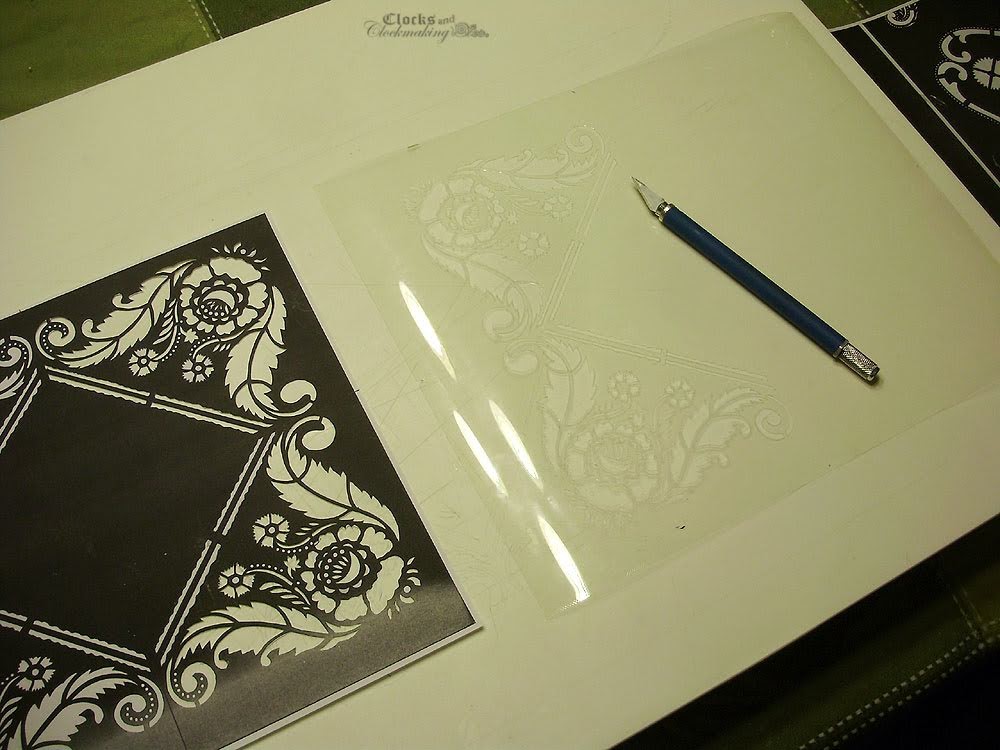 Stripping off all my hard work: 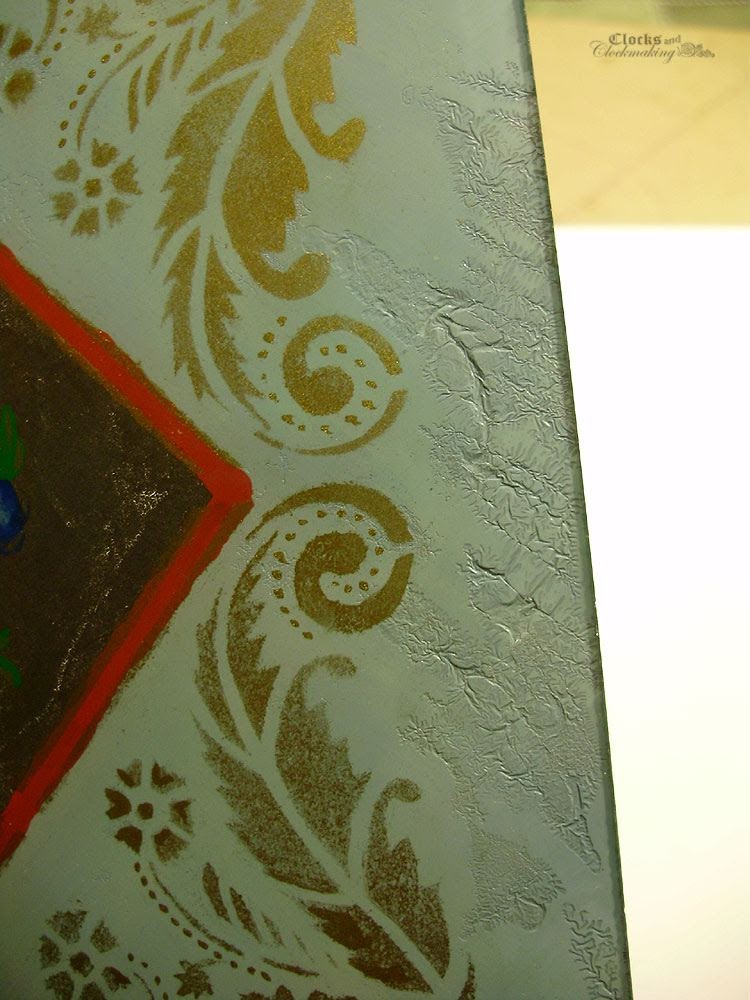 Here's the new stencil before cleanup. You can see some of the thin streaks of varnish across the glass. The arrows point to all the goof areas that need to be cleaned up. I use a toothpick to just scrub the glass clean in all these spots and to clean up any rough lines. 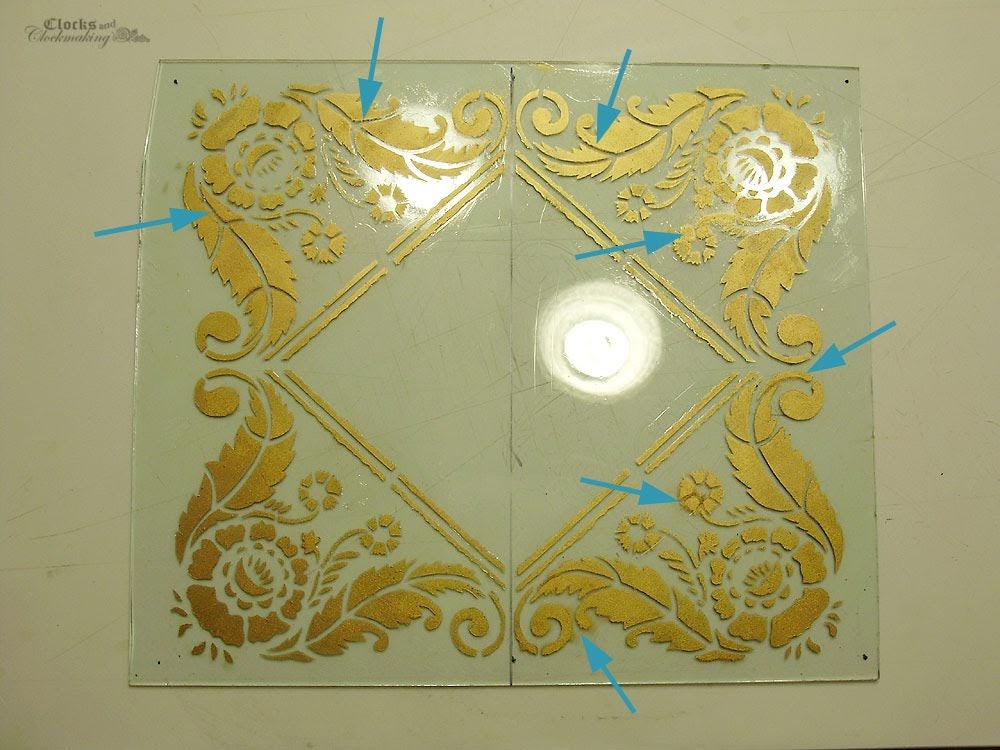 Before cleaning up (note centre of flower): 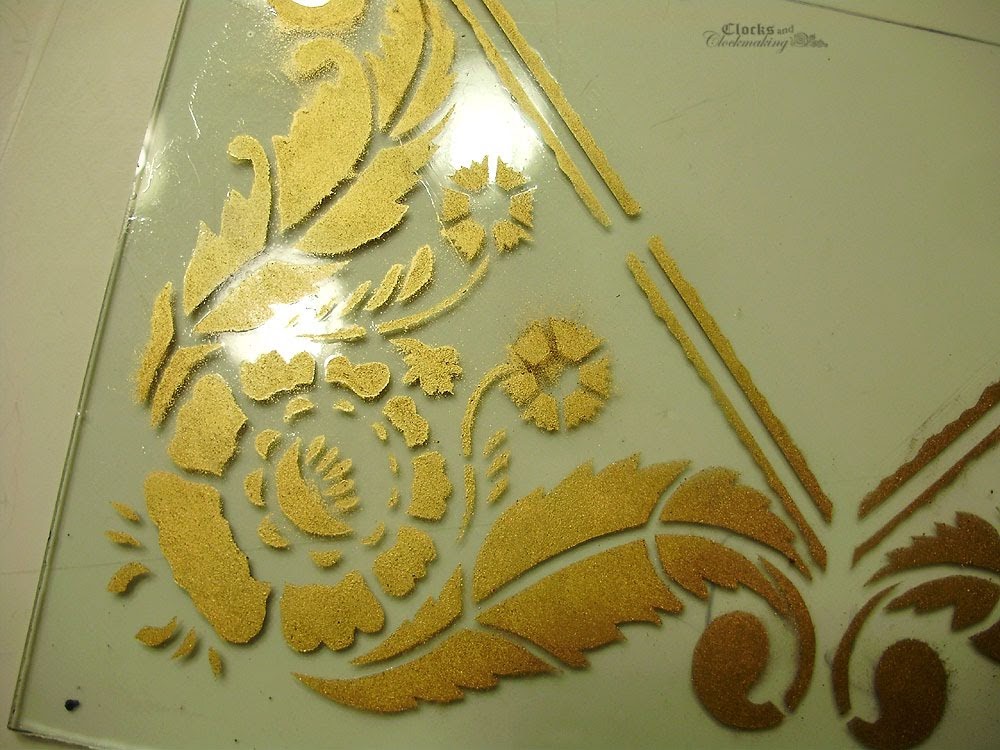 New bouquet stencil. You can probably see where a lot of the dots are missing (centre of flowers and ends of stems etc). 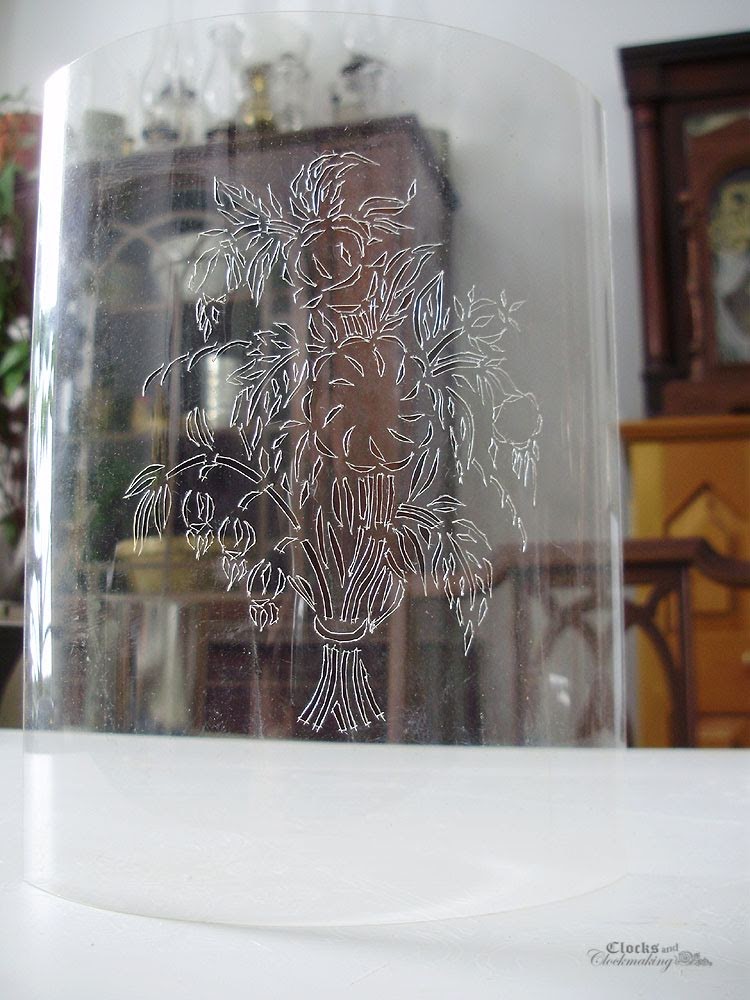 Bouquet and red border done. At this point I really didn't want to mess up the grey so I did over a dozen colour samples. 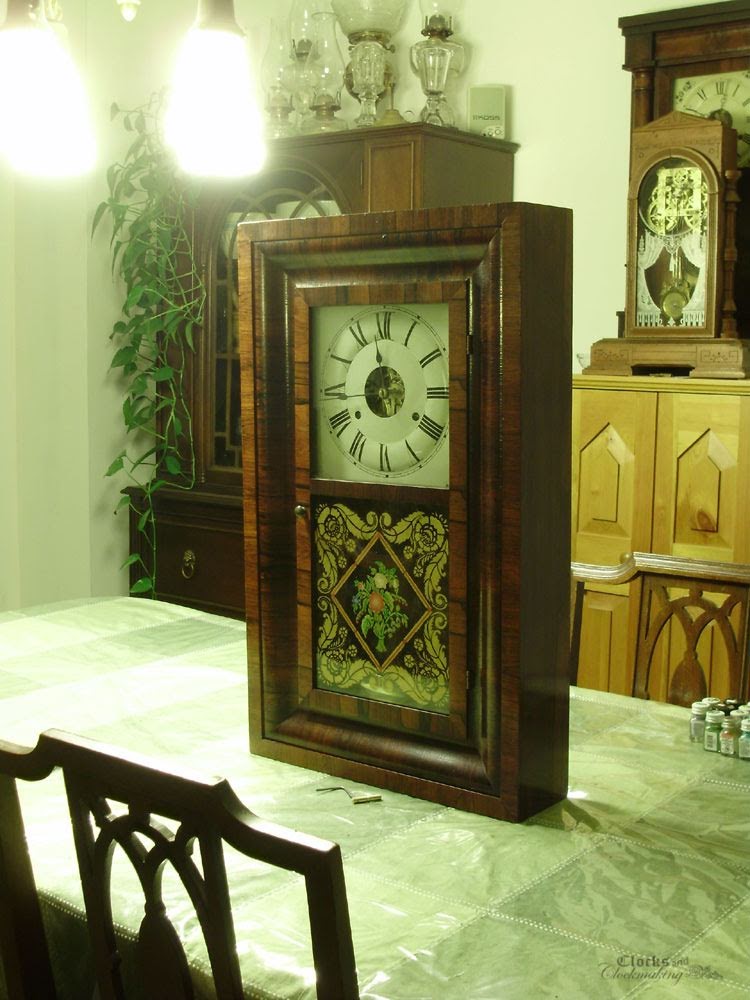 Here's the finished tablet. The gold pattern sort of disappears depending on the viewing angle, but it turned out beautifully and I'm very happy with it. 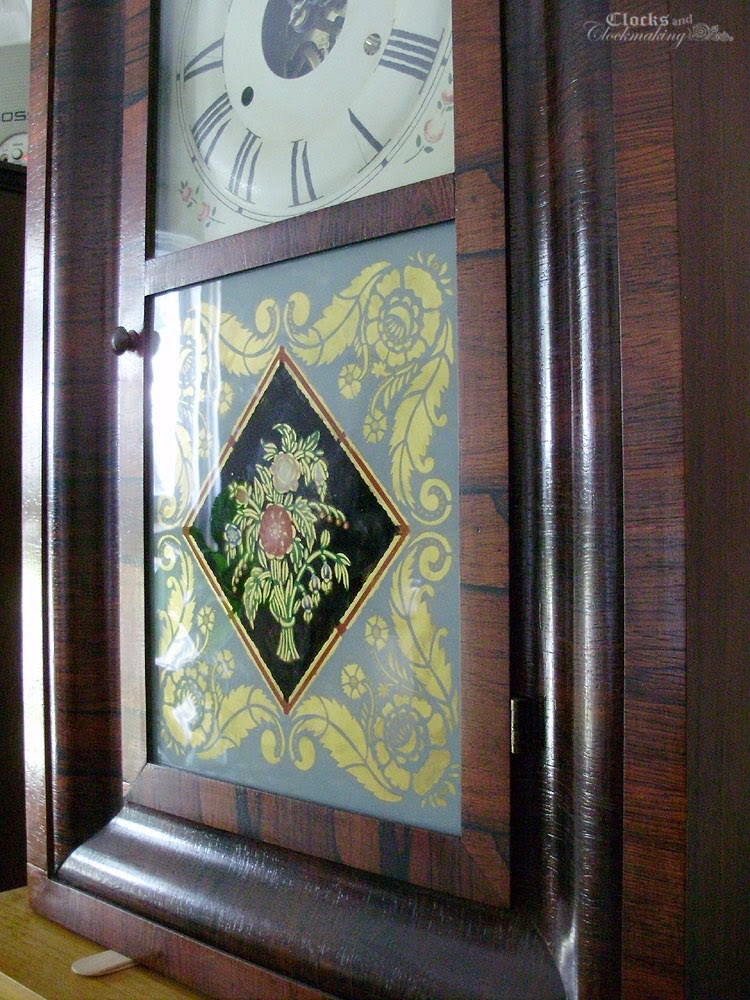 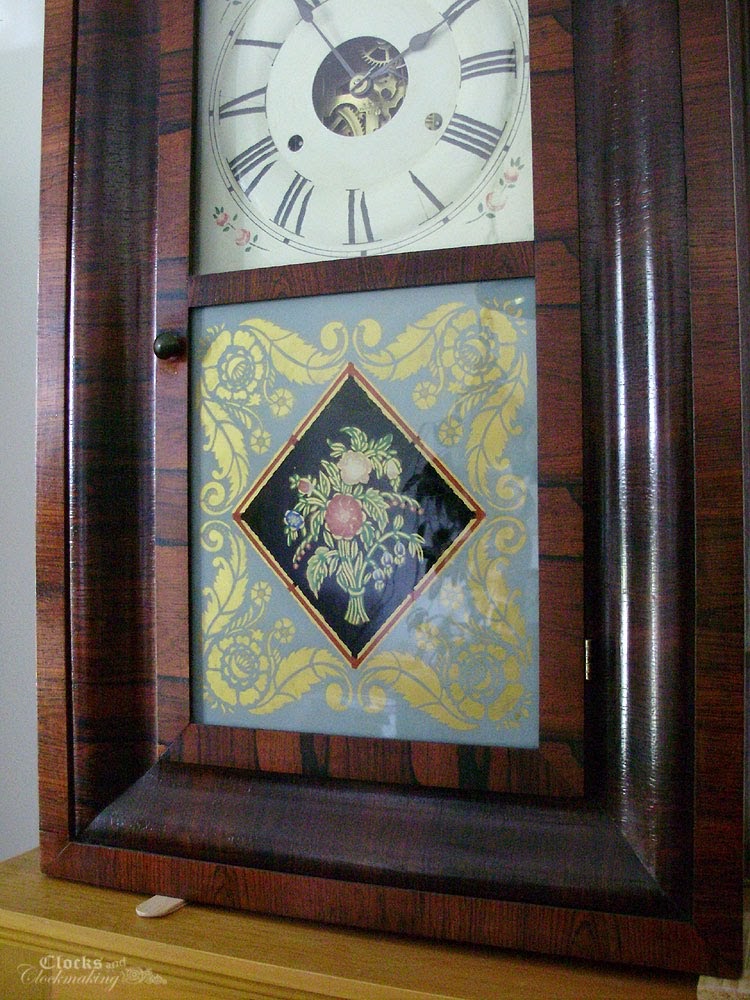 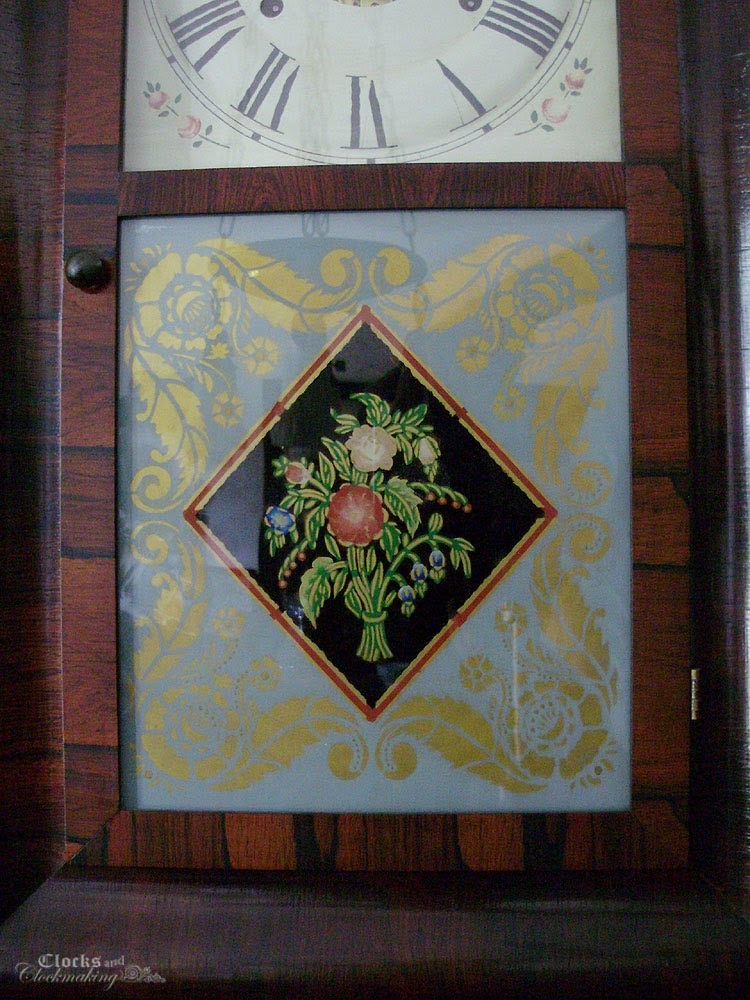