Here is a rather lovely clock that I've had sitting around in my "to fix" pile for a while. I bought the clock originally in may of 2009. This was one of those purchases where I bought it largely based on looks and price. The clock was only 99$ USD +shipping, so I thought it was a fairly nice piece (or it could be) with a bit of work.

Please note, these are a mix of newer and older photos. 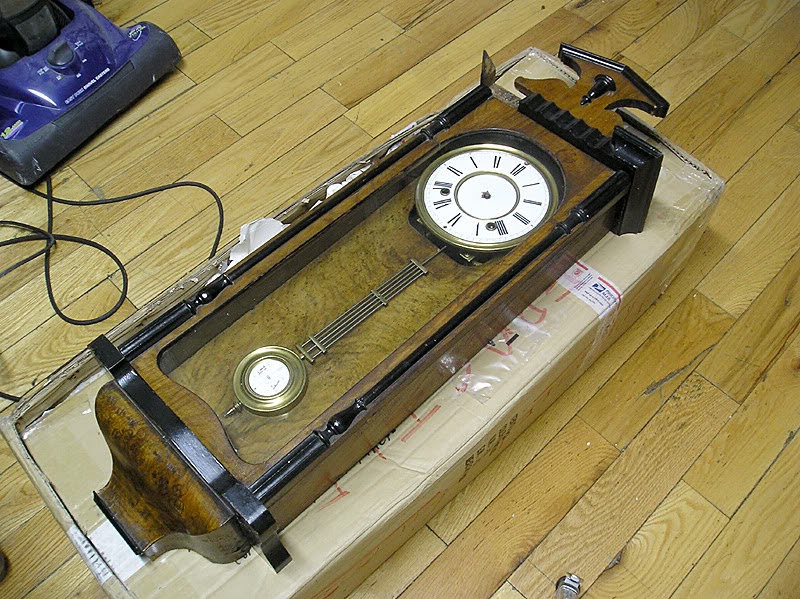 After it arrived, I started to be really puzzled by it. For the most part, the case seems to be a European product, made from yellow pine or spruce, and veneered in figured walnut with ebonized accents. It also had a bit of woodworm damage, which is something I see frequently in European antiques. 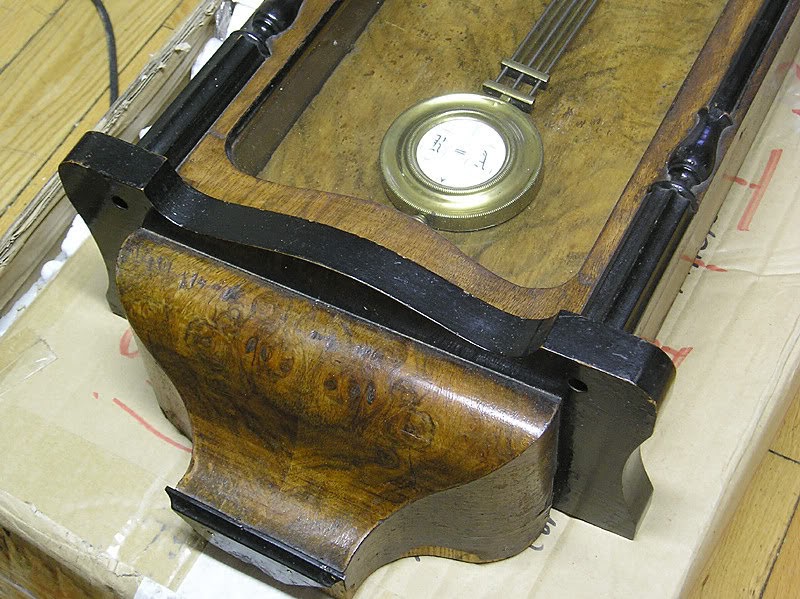 The movement and the case layout are where things start to get a bit weird. 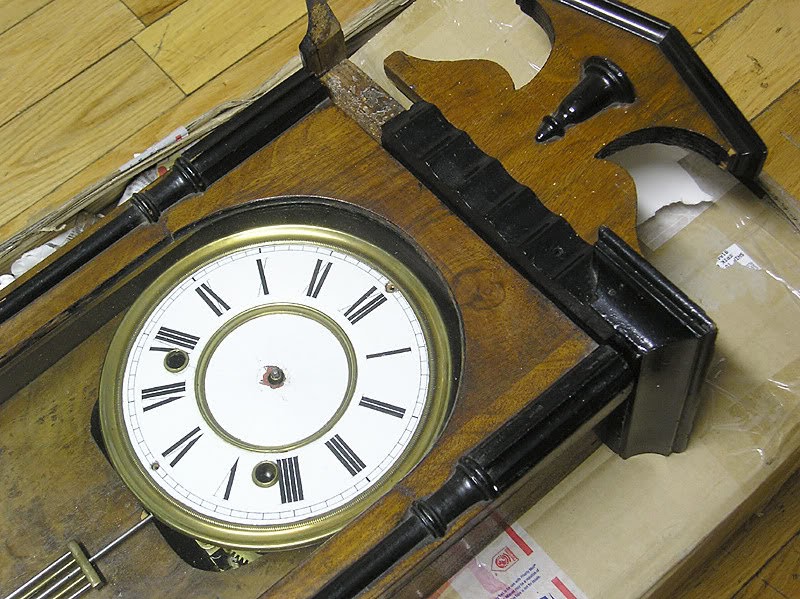 The case has a false (or double) back, which barely hides behind the dial. This back is meant to hide a spiral gong, which is now missing. The false back is held in place by a single screw into the centre bar (though the backboard). 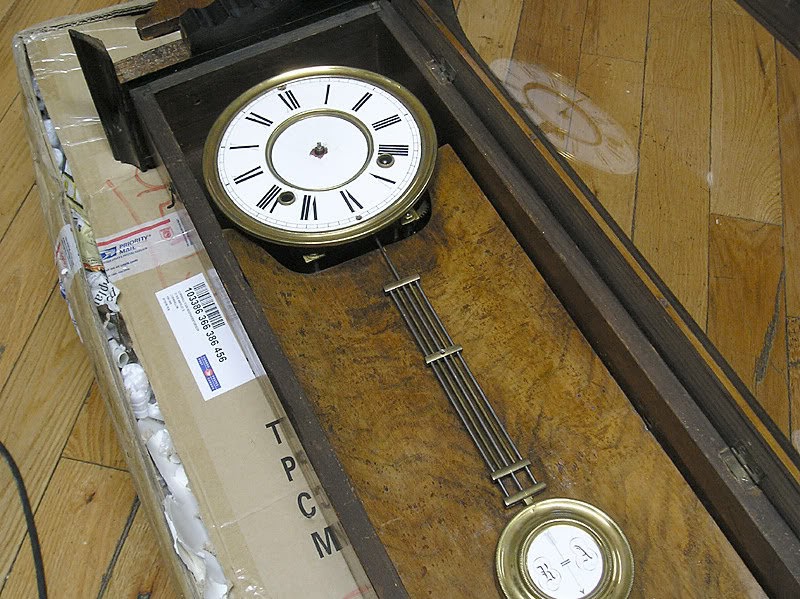 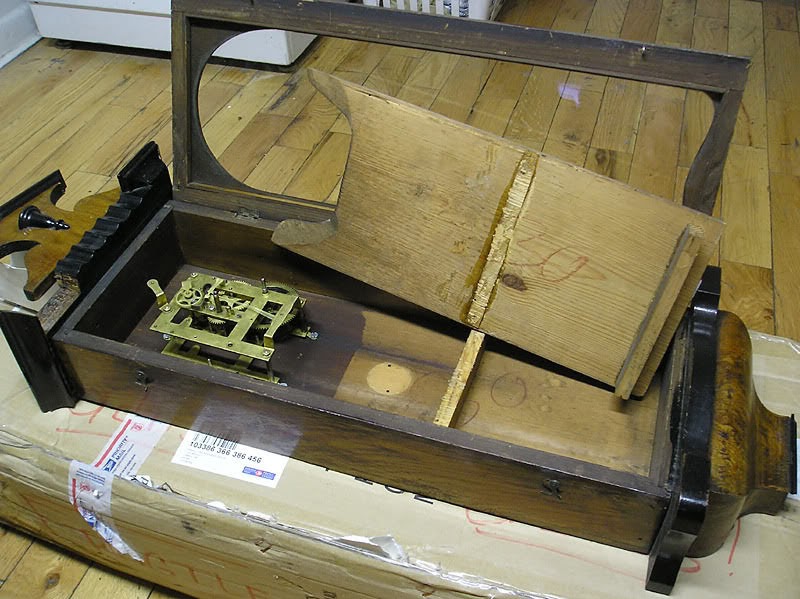 The movement is unlike any I have ever seen before. At first glance, it looks a lot like a very standard American 8 day movement, but looking closer, a lot of the details are wildly different. As a quick side note: the movement appears to be original to the clock. There are no additional holes anywhere. 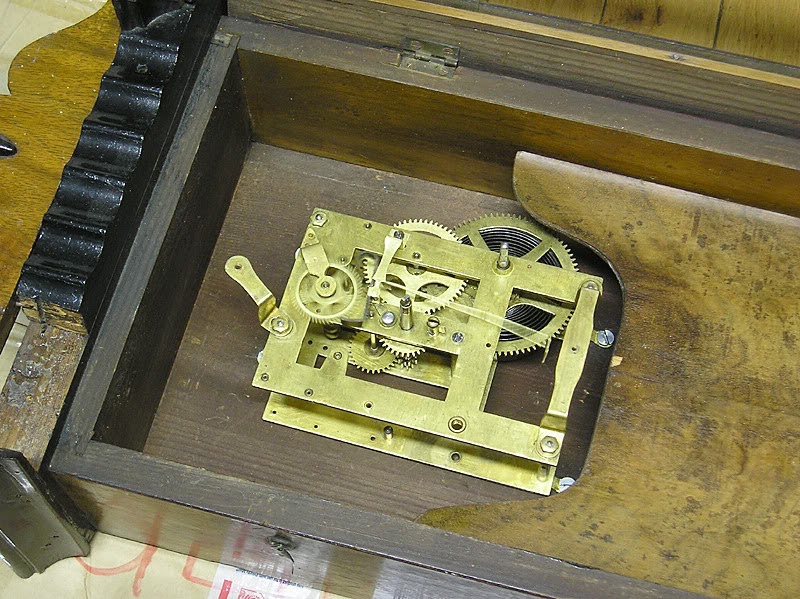 I don't know why, but the entire strike train was removed at some point in the past, which is a real shame. 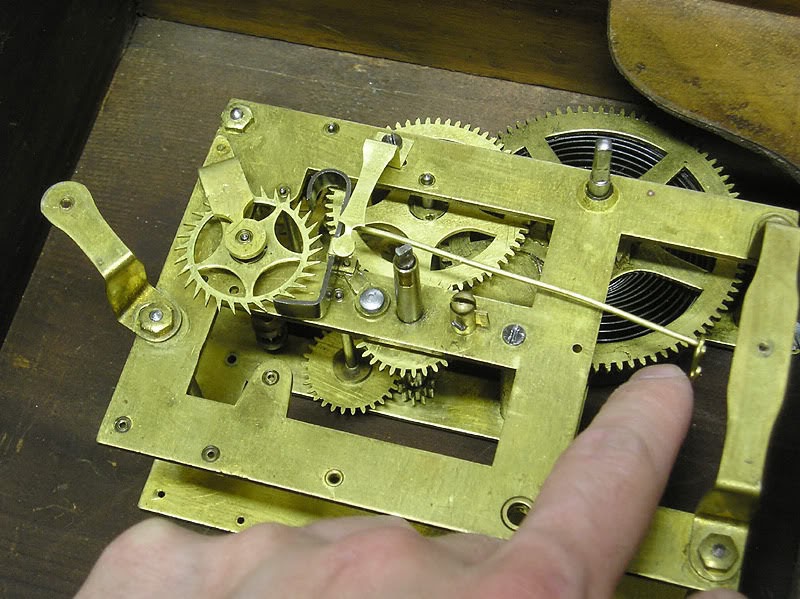 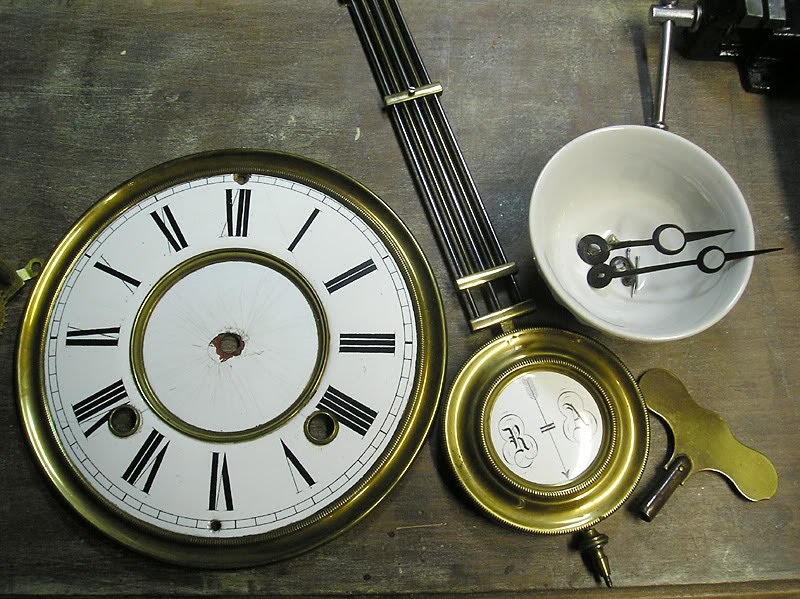 Some chipping around the dial centre was later patched-up. 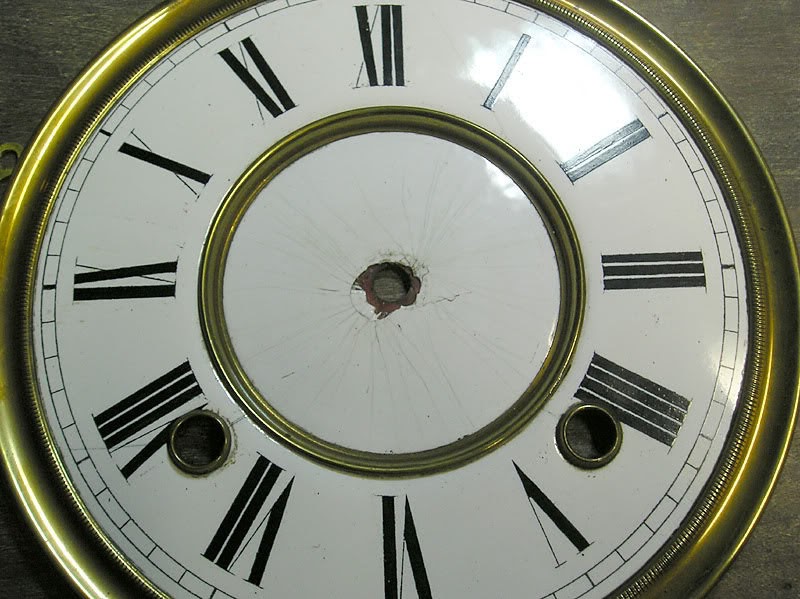 The dial is all crimped together quite nicely. It just sits over the movement and is fixed in place with 2 small screws. 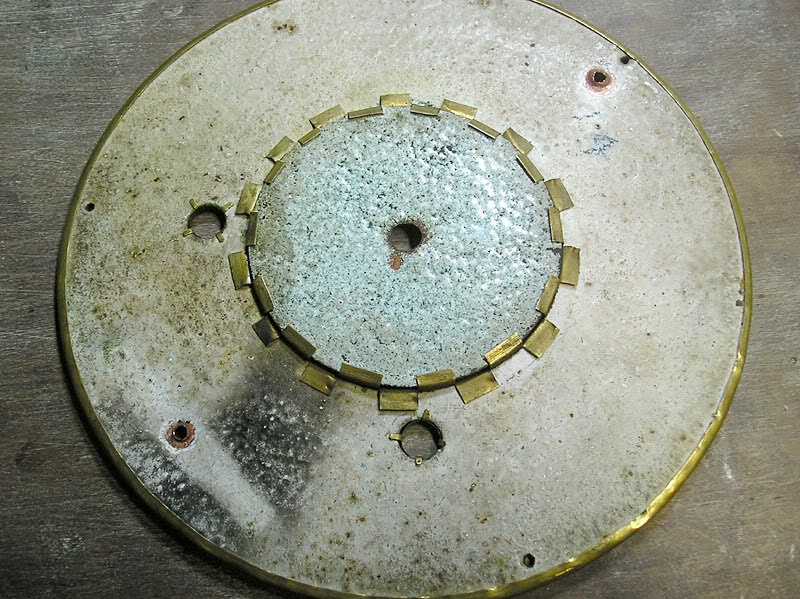 The screw-fixing method was clearly not an after thought as the enamel was fired with the holes already in place. 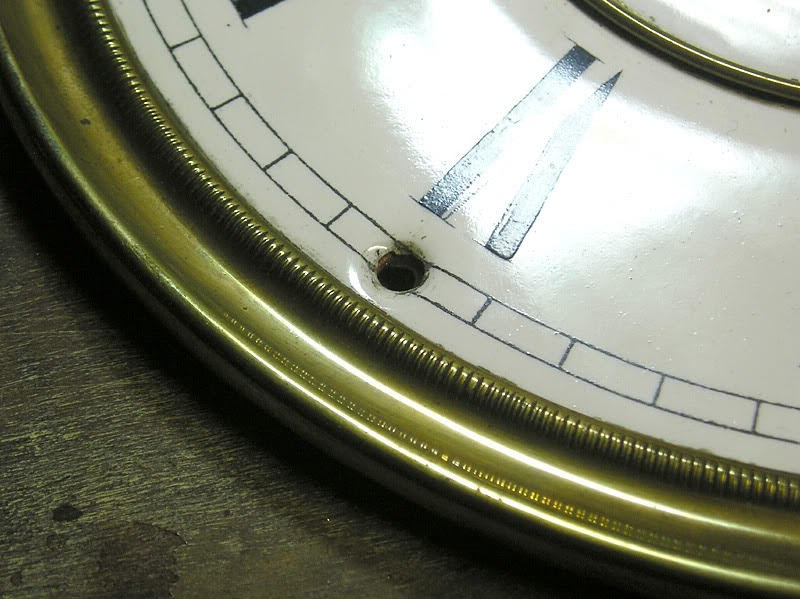 Here are more photos of the unusual movement.

Some of the differences:
- HUUUUGE verge. This strip verge is not only wider than the escape wheel, but it's also unnecessarily deep
- Suspension spring post for a double leaf European style spring
- Crutch loop for pendulum rod in an unusual "U" shape
- Unusual motion works setup
- Unusual bridges and brackets
- "I" shaft for minute hand (which is not all that common on this style of 8 day movement (American or otherwise) 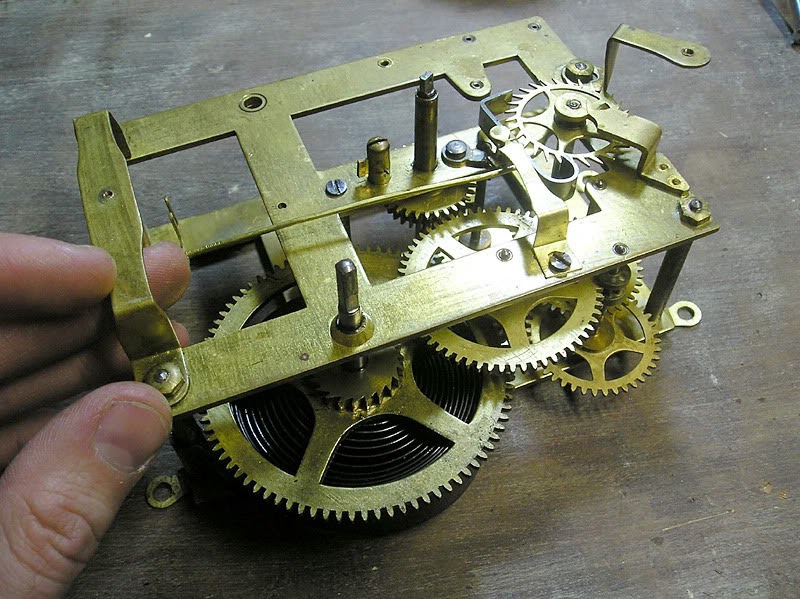 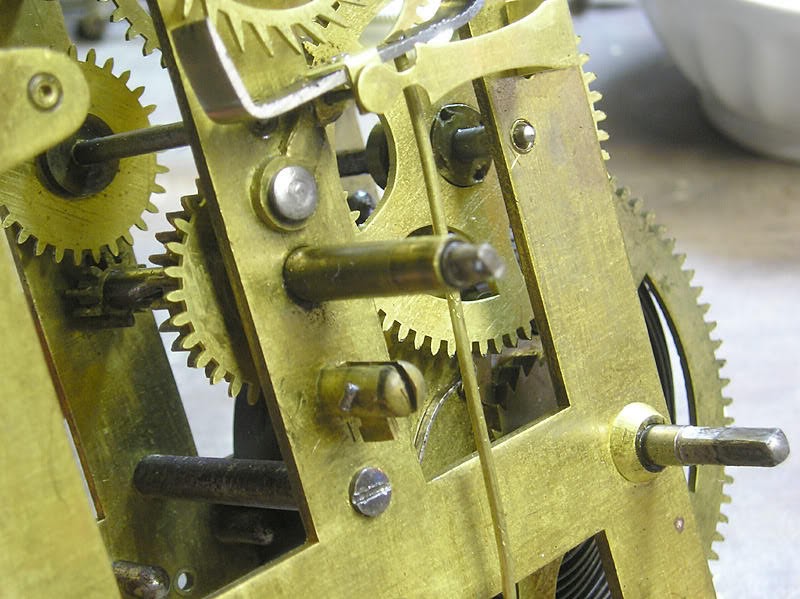 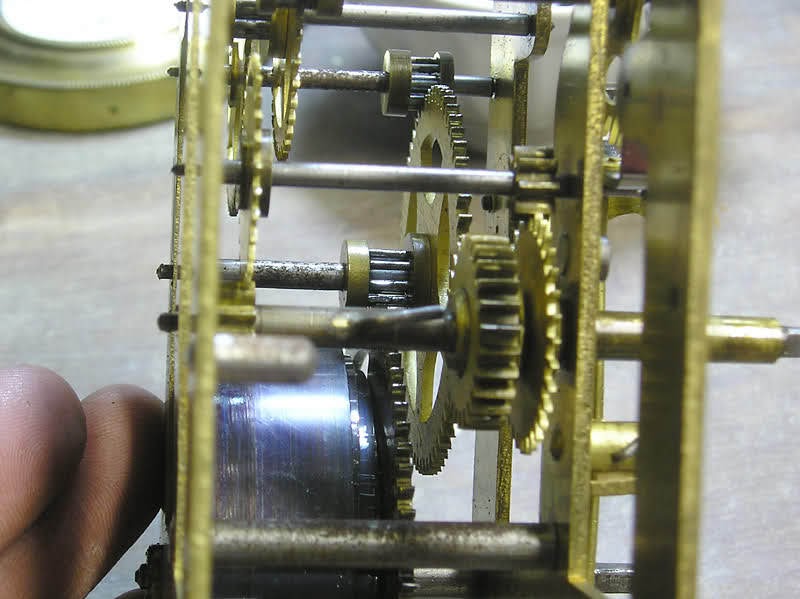 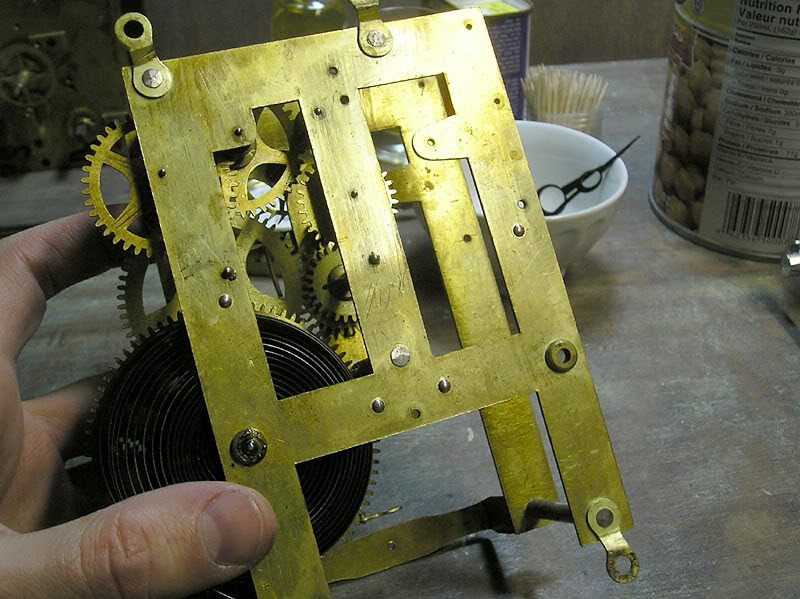 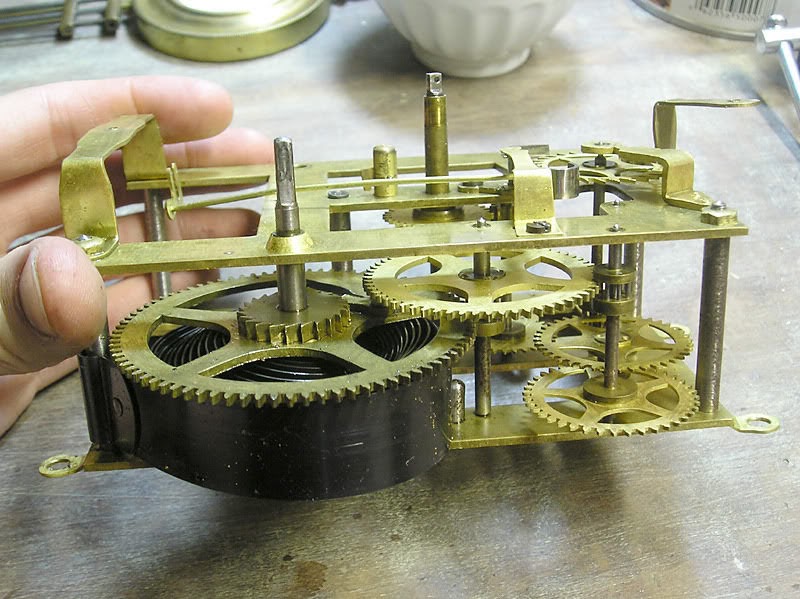 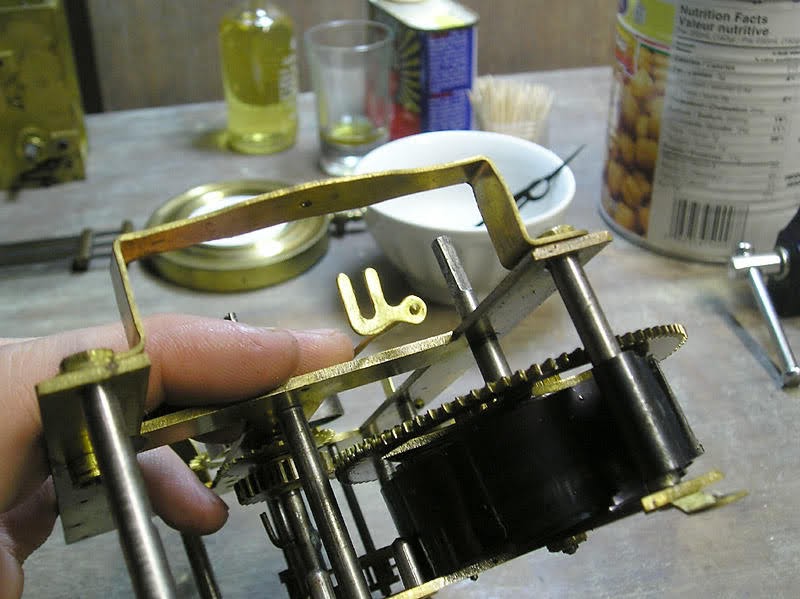 The movement seems to point to an Asian manufacture, but it's hard to say for sure. It doesn't feel cheap and flimsy, so if it is Asian made, it is most certainly an older make. I would date the clock to around 1890-1900 but again, it's hard to say. I have found no inscriptions, scribbles, stamps, or any other kind of identifying information on it (aside from the two "30" crayon marks on the 2 backboards). I have also never run across another similar clock since buying this one.

I seem to have a knack for finding rare and unusual pieces. I don't think this one is particularly valuable or desirable, but it's still a rather nice piece. I'd love to hear your thoughts and opinions on this clock. If you have a similar example, please contact me.
Posted by JC at 2:46 PM