This is a long overdue post, as this clock has been finished, and running for over a month now. It seems as though almost all of these comtoise clocks require repairs. This is the third one I buy, and all three needed repairs (some more severe than others). However, all three are now fixed and in great working order.

I did *NOT* want to take this dial apart, because it still had the original rivets in place, but the enamel portion was loose, and there was quite a bit of rust, so I had no choice if I wanted to do a really proper repair. The two bottom tabs were also broken and I wanted to fix them.

Trying to pop the rivets out was too difficult and very risky (the enamel dials on these are EXTREMELY fragile), so I ground off the backs with a Dremel. 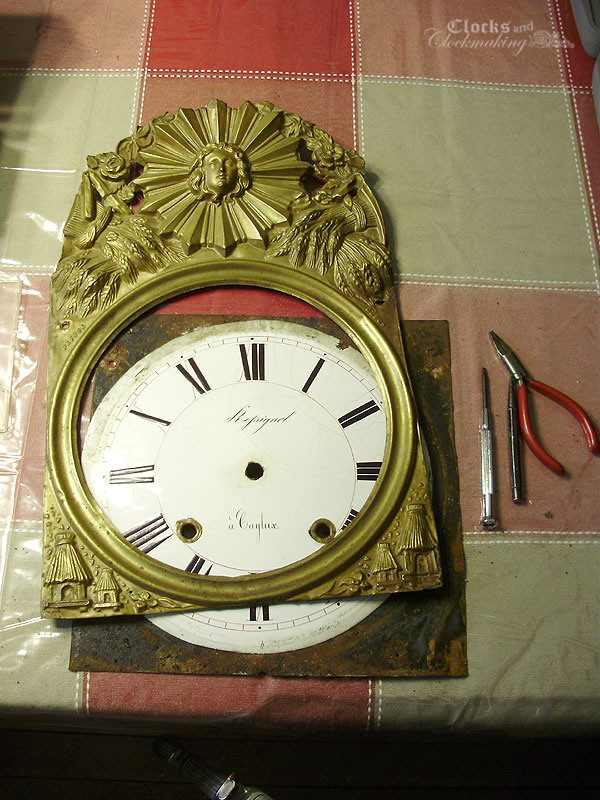 Now, what's extremely bizarre here, is that the enamel dial is completely loose in here. No rivets holding it in place, and no later screws. Note the position of the holes (1 and 7): 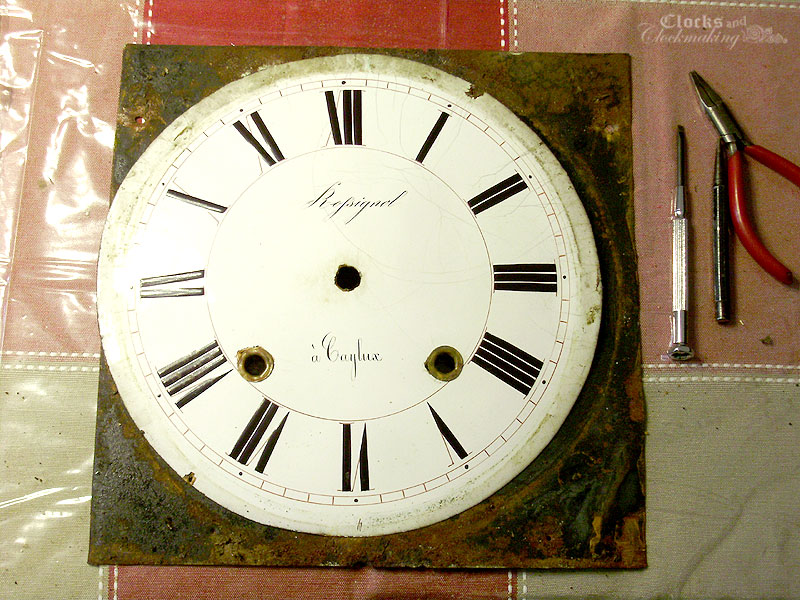 The original dial holes in the sheet metal backing plate are at 11 and 5! The arrow shows the 5 o'clock dial rivet, and the lower right brass facing rivet. 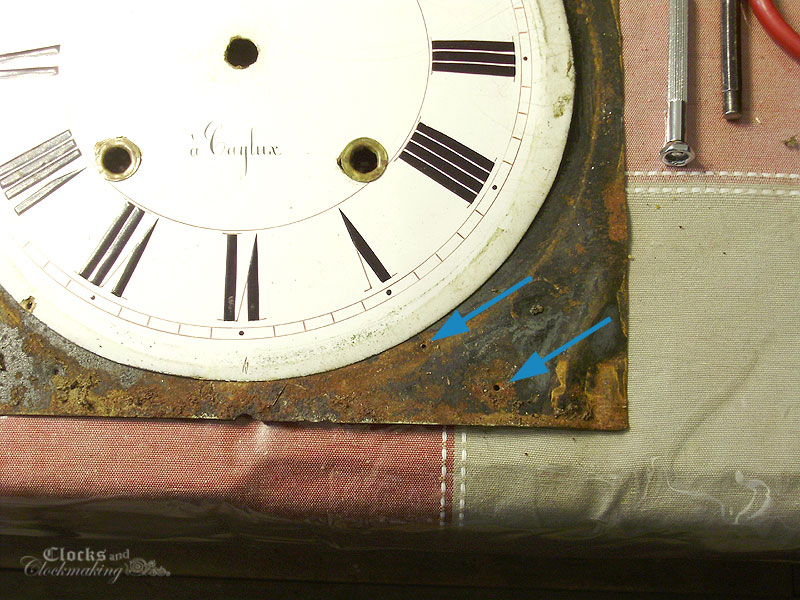 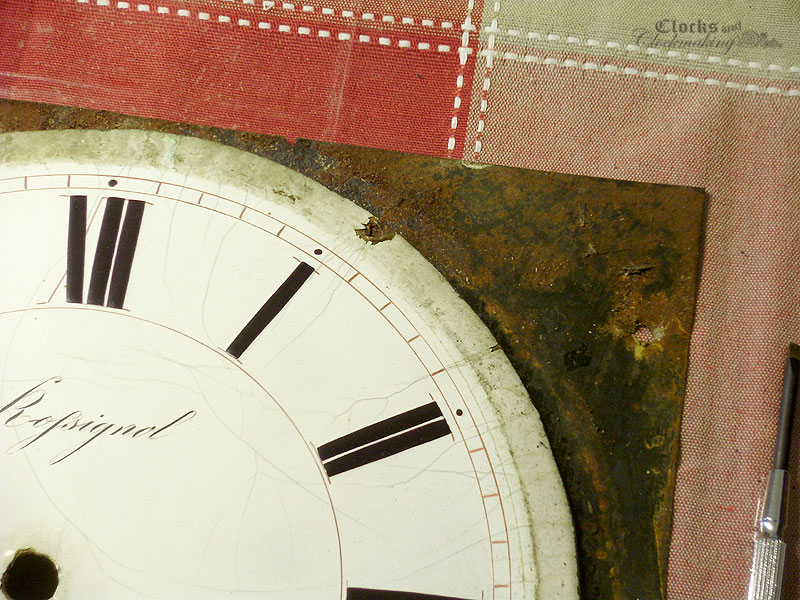 There are no holes at 1 and 7, so this dial can't be the original. 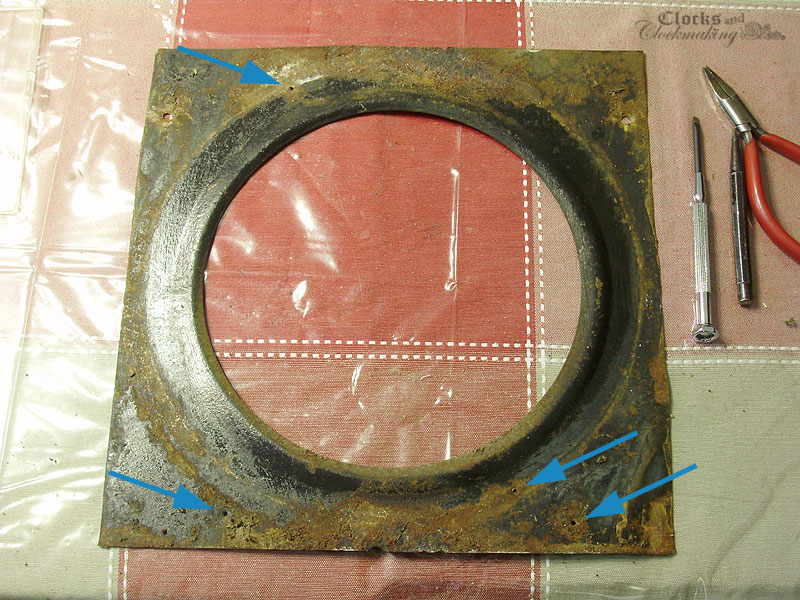 I already knew that this entire dial assembly was not original to the movement (there are 2 sets of holes in the front pillars) so one possibility is that the enamel dial is original with the movement, but the brass front and backing plate are off another clock. The reason I think that the enamel dial may be original is that so far ALL three of my comtoise clocks have different hole spacings and locations with respect to the centre. It would have been very difficult to find an exact match, since a lot of these movements were all hand made. I think the original brass front might have been crushed very badly, and this was the best repair option. It's hard to say for sure.

In either case, I decided that since the clock was unlikely to ever have a more suitable replacement as this current setup, I'd make the marriage as seamless as possible (while also not erasing all traces of it). I very carefully fitted the dial to the backing plate (with small screws), and with some careful fitting of the brass front, it looks great.

One other piece of the clock that needed attention was the pendulum's silk thread support box. This little hat shaped box is fixed onto the top of the clock, and it was missing the front cover. Luckily I know what it should look like, since it's made the same as on the Radet père comtoise.

The cover was cut from some old rusty steel strapping material, shaped (using a vise and an old nail as a forming tool). 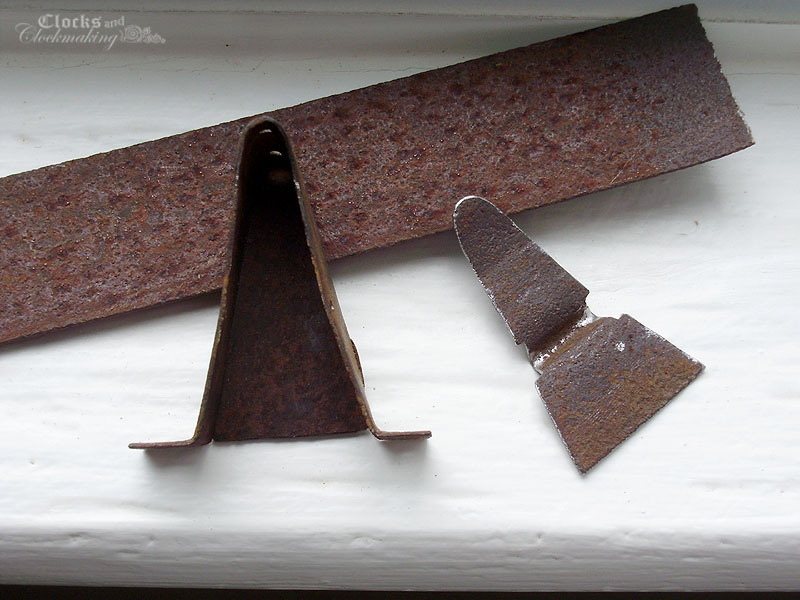 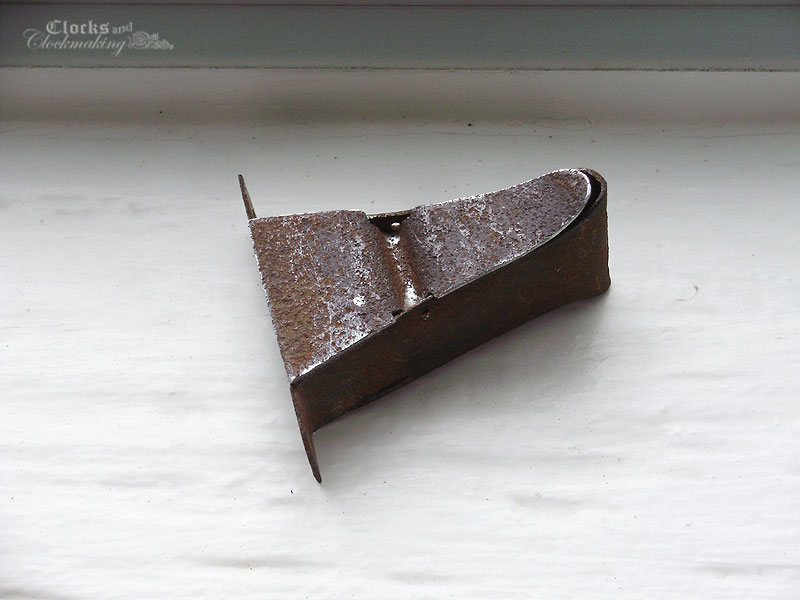 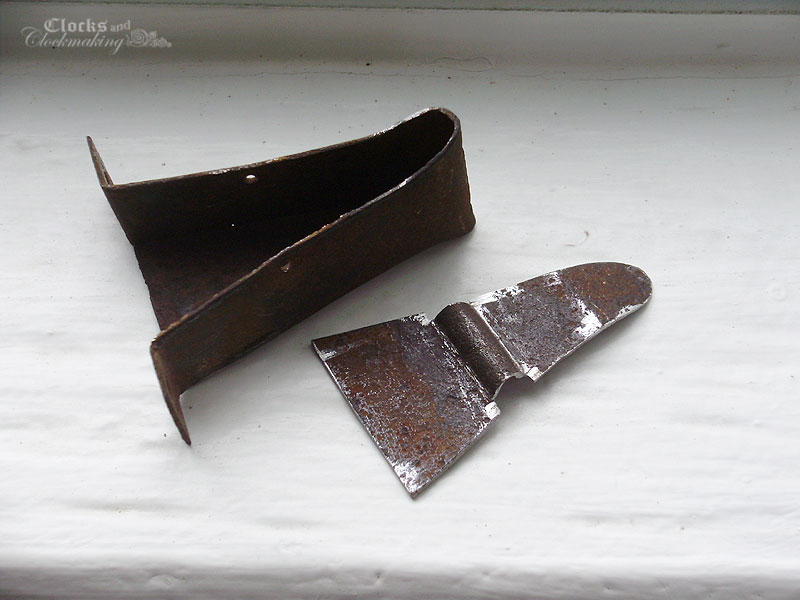 Once it's painted it will match everything else perfectly.

While I was cleaning the wheels, I found two old inscriptions. One appears to read "Biorgues 1888": 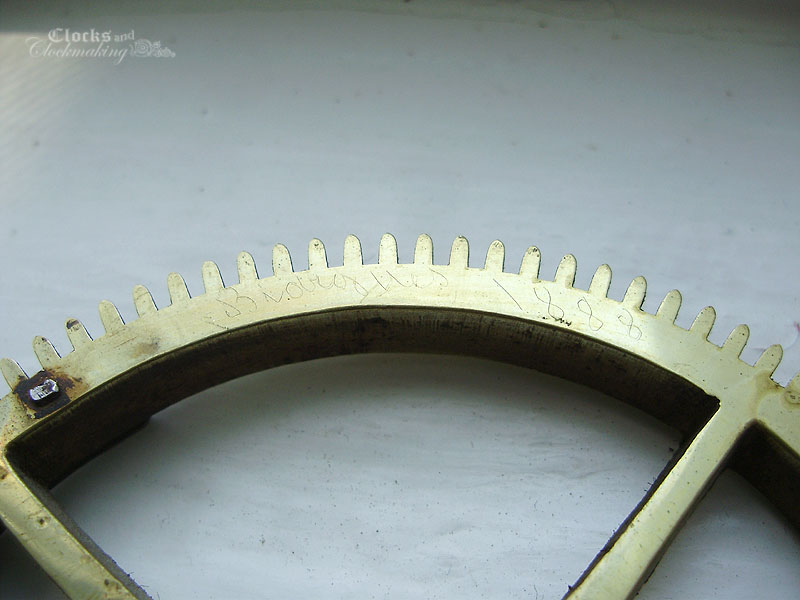 While the other appears to read "A Wallez": 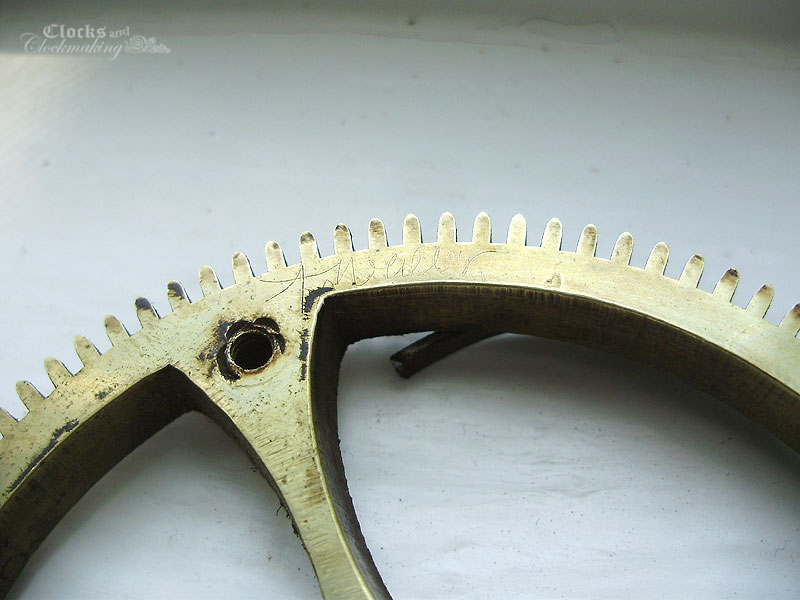 A few photos showing the cleaned-up wheels and levers: 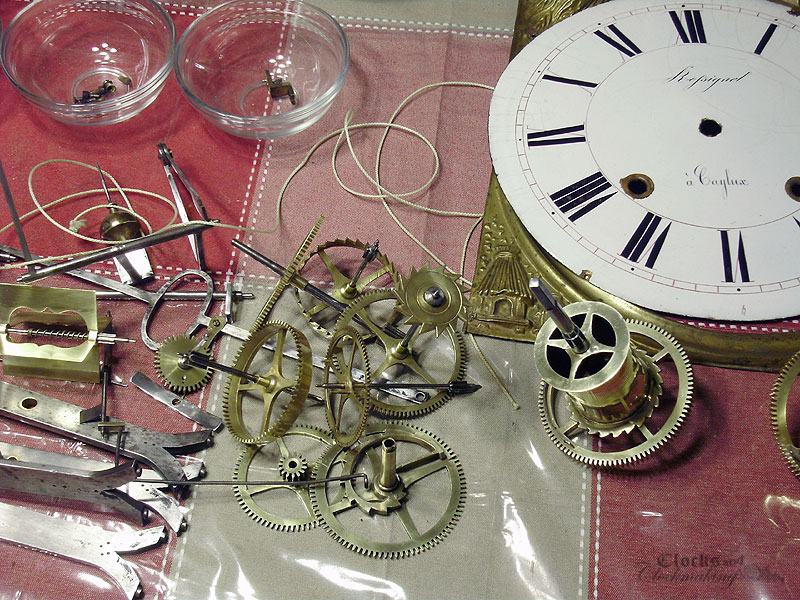 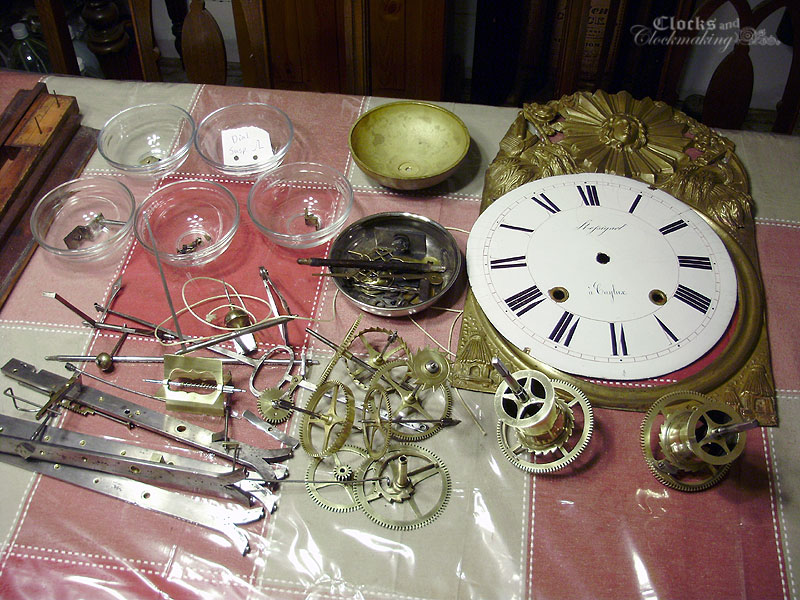 A few other repairs included patching the large hole in the top (using JB Weld), and small odds and ends such as cutting new leather washers for the bell. I did not find an affordable set of replacement doors yet (I'm not spending 100$ on them) so I made a temporary one from thin Masonite painted black.

The last thing I need to do now is photograph my "make do" replacement pendulum, and photograph the completed clock. I will also need a proper set of weights, and new lines/hooks, etc.
Posted by JC at 5:27 PM