The original inspiration for this clock was largely based on the following three clocks: 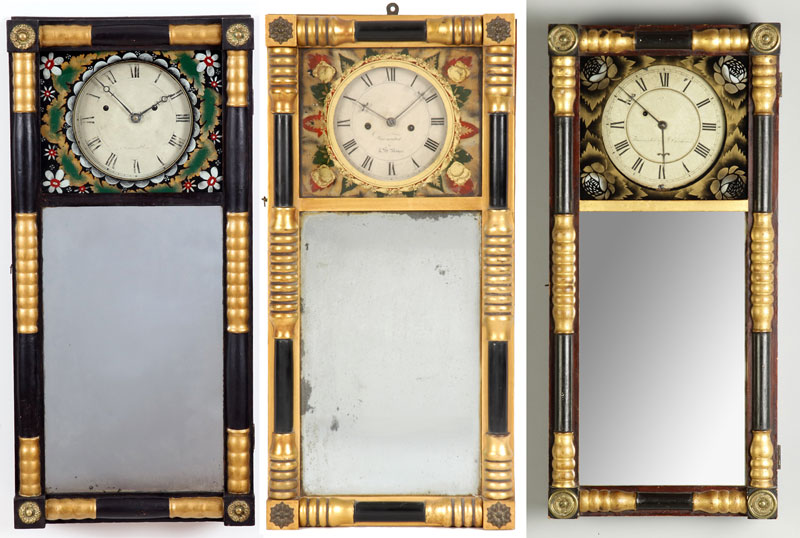 I originally really loved the overall black look of the first clock (by Abiel Chandler), but I later changed my mind on the colour scheme. I preferred the shape of the columns on the third clock (by J. Chadwick), and the centre clock (by Leonard W Noyes) was just nice in general (as far as the colouring and aging).

A lot of research was done while building this clock. I needed as many source images as I could find, and by the end of the project, I had stockpiled close to 200 photos. These include construction details, corner rosettes, case sides (which are rarely photographed), antique mirror and paint textures, movements, and a plethora of painted tablet images.

I can't stress enough that if you plan to build a reproduction, you need to do as much research as possible to get the best results.

To get the most convincing effect possible on the case interior, I built this clock using old scrap pine boards with existing old surfaces (as much as possible). A lot of this wood was just junk boards that were found around the house while cleaning out the garage, and during renovations. 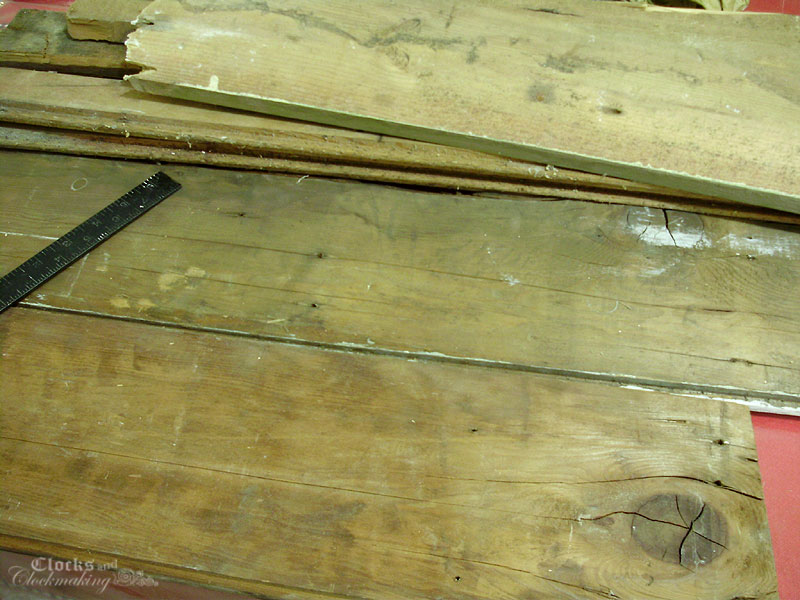 One of the drawbacks of using old wood, however, is that you will rarely have large usable (clear) pieces, you will also often have nail and screw holes in your boards. You must be very careful when running boards through machinery, since any missed nails can damage your tools, or become dangerous projectiles. Another disadvantage is that your old boards may be warped or twisted. If these issues are too difficult to work around, or you simply prefer to work with new kiln dried furniture grade wood, by all means, use what you're comfortable with.

I find that clocks in particular make good use of old boards because the majority of the pieces you need are fairly small compared to other woodworking projects. Other useful sources of wood are salvaged tongue and groove, barn boards, or old damaged furniture.

When building any clock, I tend to build around the movement that I plan to use. I had originally planned to use an ogee clock movement, striking on a cup bell for this clock, however, this too was changed later on (as you'll see later). For this reason, the case was built smaller than a traditional New Hampshire mirror clock to fit around an ogee clock movement. A standard NH mirror clock ranges slightly in size, but is generally 30" tall, and around 13.5" to 15" wide. This clock was scaled down to 26" high x 13.5" wide, and 2 1/2" deep (not including the backboard or the door). A standard clock also uses slightly thicker wood for the case body (3/4" thick). My clock uses 5/8" thick stock.

The case for a typical New Hampshire clock involves dovetails, or simple butt joints at the corners. A very select few use a half-blind dovetail (with the sides of the case showing no visible joinery). You may use whichever joint you like.

There is no need to be fancy or extremely accurate with the dovetailed corners. The dovetails on my case were loosely traced on a piece of carboard, and quickly cut and trimmed in about 10 minutes. It is, however, important to note that the tails should be on the top and bottom of the case, and not on the sides. If any of your joints are less than perfect, you can fill any gaps with thin wooden shims or slices of veneer. It will all be sanded, puttied, gessoed, and painted, later. 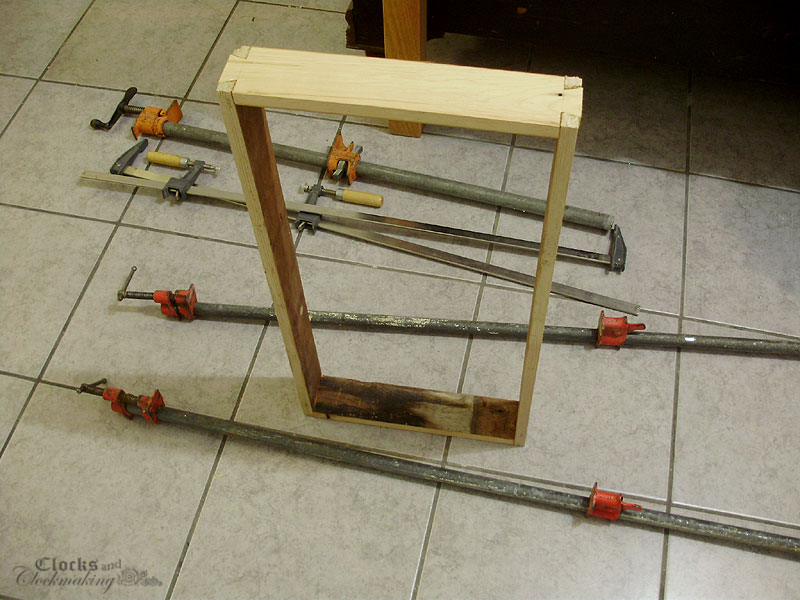 You can see here how the joinery looks, and how I usually use a full-scale drawing when building projects like this. You can also see that I was able to keep 2 old edges, while the other two had to be cut to get usable wood. All the small nail holes on the case sides and bottom get filled with wood putty and sanded smooth. In most other places (like the backboard) they stay exposed as "character". 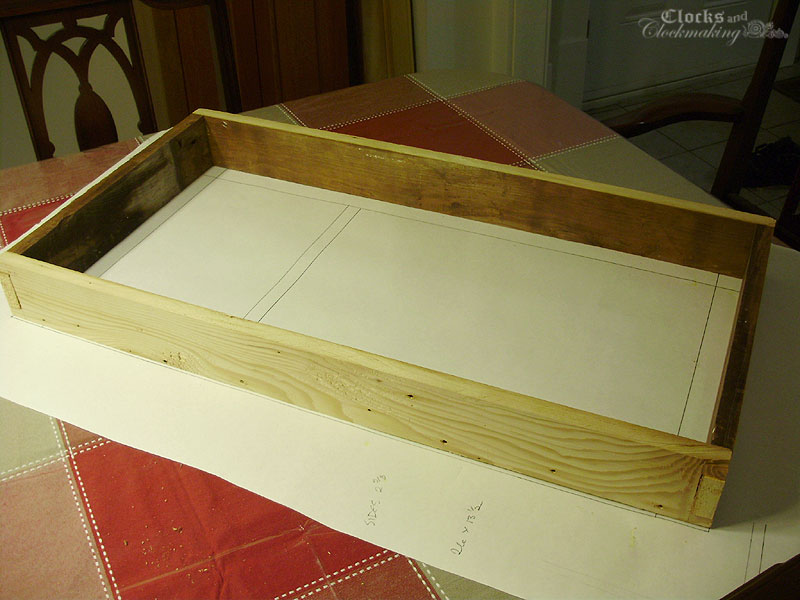 When it comes to the construction of the doors on mirror clocks, it's harder to tell how some are put together. A lot of them (the majority) appear to have mitered corners, while a few have lap joints. I'm not sure if the mitered corners are held together with a hidden dowel, a slotted joint, or simply nails plus the corner blocks on the front, but I decided to use simple (and strong) lap joints for my door. As with the frame, the door is also 26" x 13.5", and built from 1 1/2" x 5/8" stock. If you are building a full sized copy, use 3/4" thick stock, and wider frames (1 3/4" to 2" wide). The doors on these clocks are QUITE thick compared to a lot of other clock doors I've come across, but they are all made this way, with some doors being nearly 2" with the corner blocks attached.

Build the rectangular frame first, and the centre divider will be made afterwards. The door frame was built from old wood, but I milled it flat (down to "fresh" wood) on both surfaces for better accuracy with my lap joints. For something like a door frame, try to find the nicest, clearest and flattest stock. 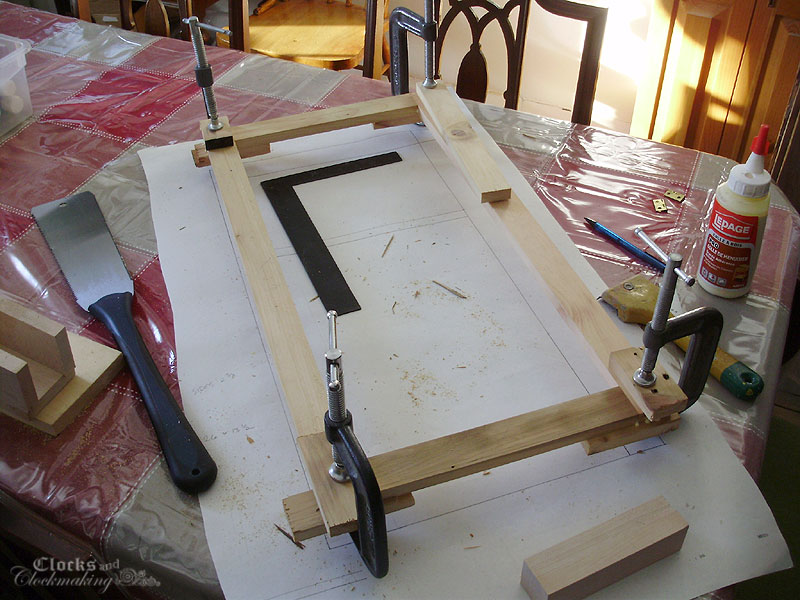 Once your rectangular door frame is glued, sand it flush on the corners (edges), and on both surfaces, then run a deep rabbet along the interior edge to fit your glass. I chose to do this with a router, and to cut out the rounded corners by hand with a sharp chisel. You want the rabbet deep enough to leave you with about 1/8" lip to hold the glass at the front of the door. Do not worry about the centre divider yet.

Once your frame is ready, prepare the piece that will be your centre divider. This is by far the most difficult, and potentially dangerous piece to manufacture, and I would suggest making a piece double or triple the length needed simply for safety. I made mine on the table saw, and I left a very small sliver on each side of the centre (forming essentially an M shape). The extra slivers were cut off afterwards with a chisel. My centre bar was 5/8" x 5/8", and I would suggest a 3/4" square bar for a full sized clock. 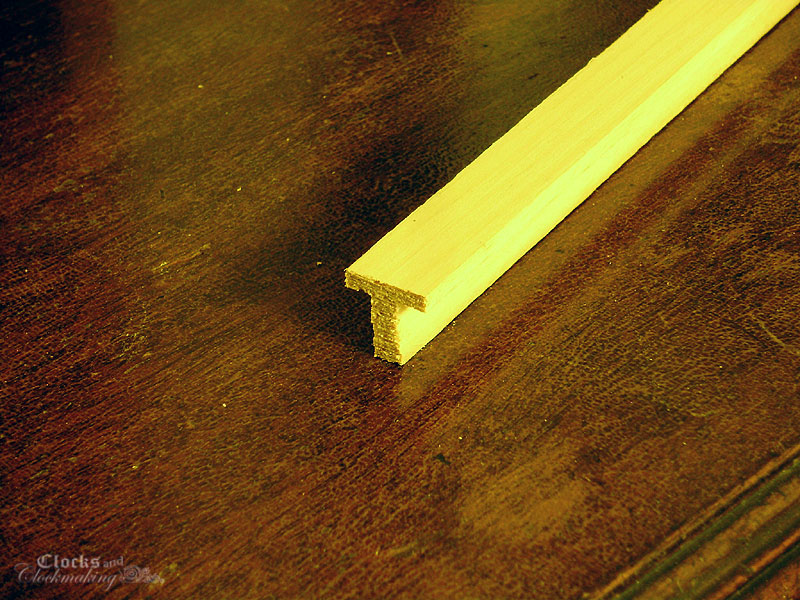 Next, you need to carefully trim off about an inch (or less depending on the width of your rabbet) of the top portion on each side. The centre portion needs to fit between the top part of the frame. 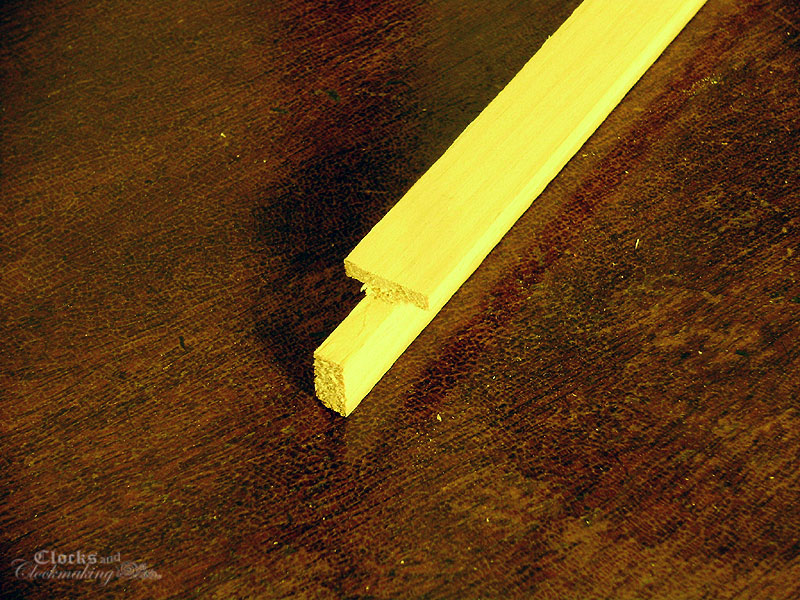 Once it's trimmed to size, you need to carefully cut out two mortises. I did this with a drill bit, and a 1/8" chisel. 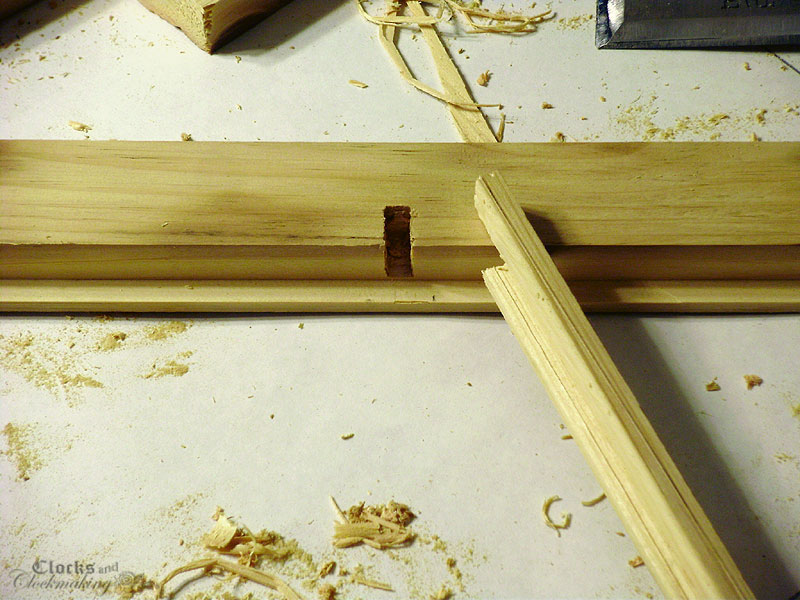 The completed door so far should resemble this: 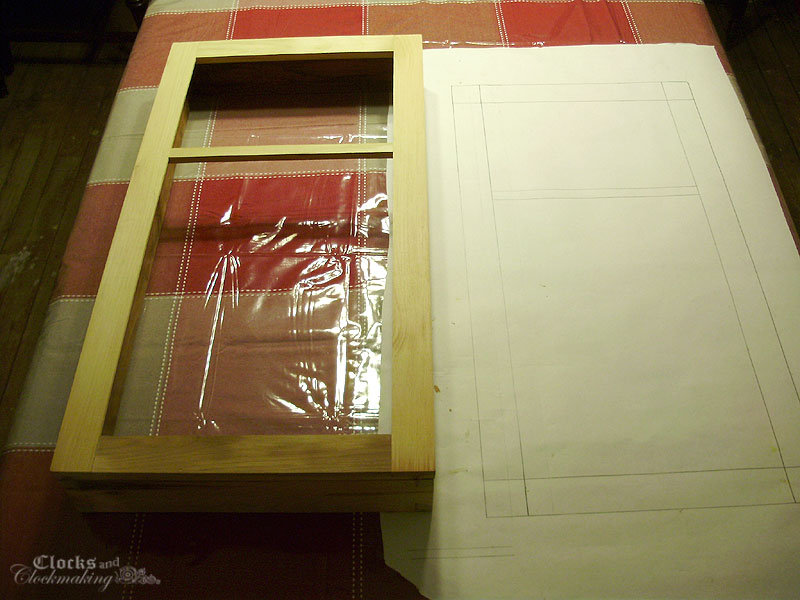 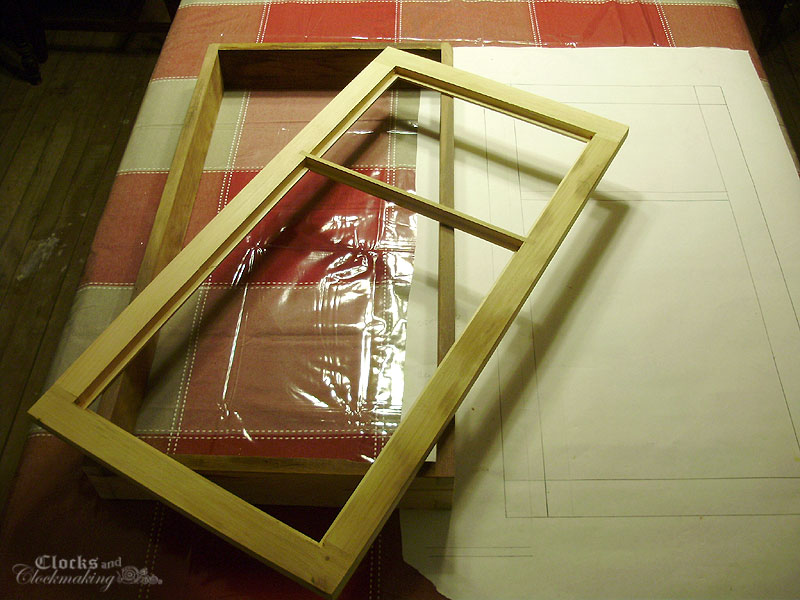 Any small errors at this difficult-to-cut joint can just be filled-in with putty as I did here. 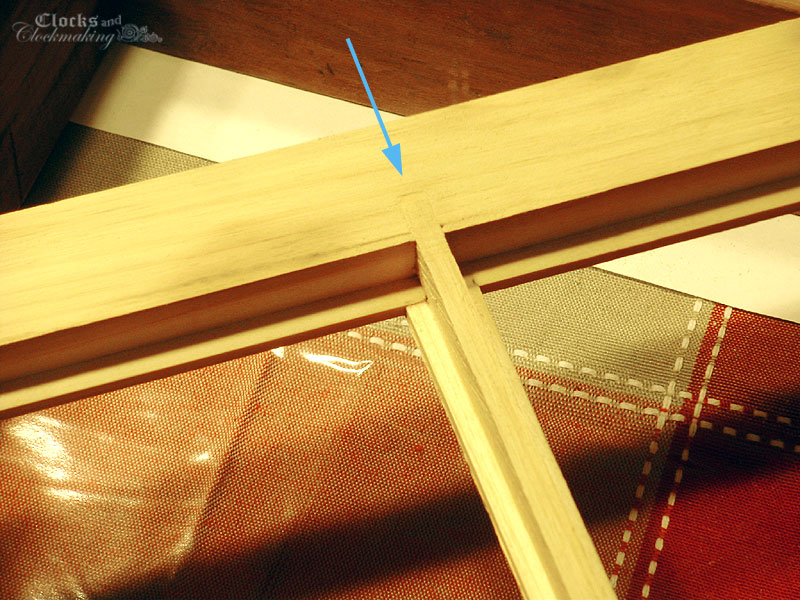 The routed inside corners get cut with a chisel. 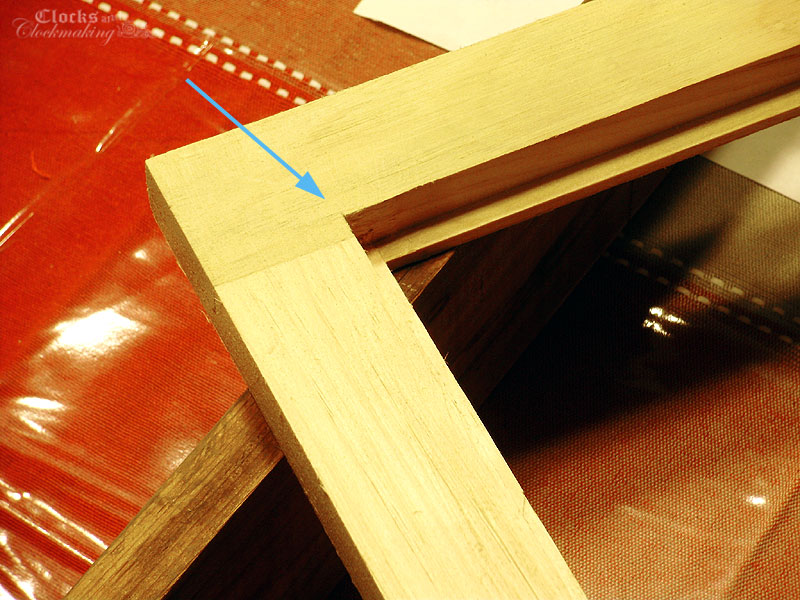 Find a suitable closed-grain wood such as maple, clear pine, basswood, or poplar for the turnings, and prepare 2 blanks. The blanks should be the same width as your wood frames, and longer than the overall door to accommodate screws and lathe fittings. Glue your centre joint with a single sheet of newspaper, and secure both ends with wood plates with screws. These are "split turnings", which means you are making two halves together in one shot. Because they're glued together with paper, they risk flying apart, and you also can't mount them in the lathe normally, because your centre points will separate the two halves before you even get a chance to start. This is why you need the screwed "end caps".

I used maple, but poplar would have been a much better choice. 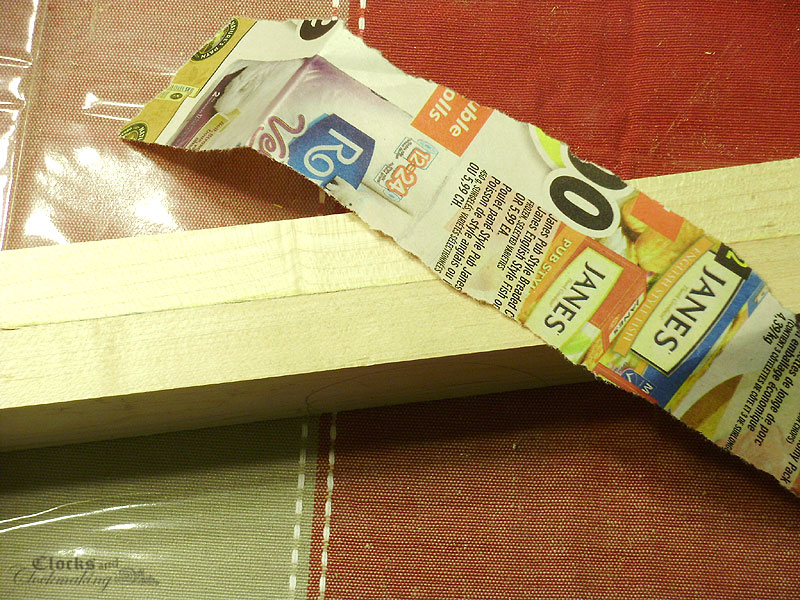 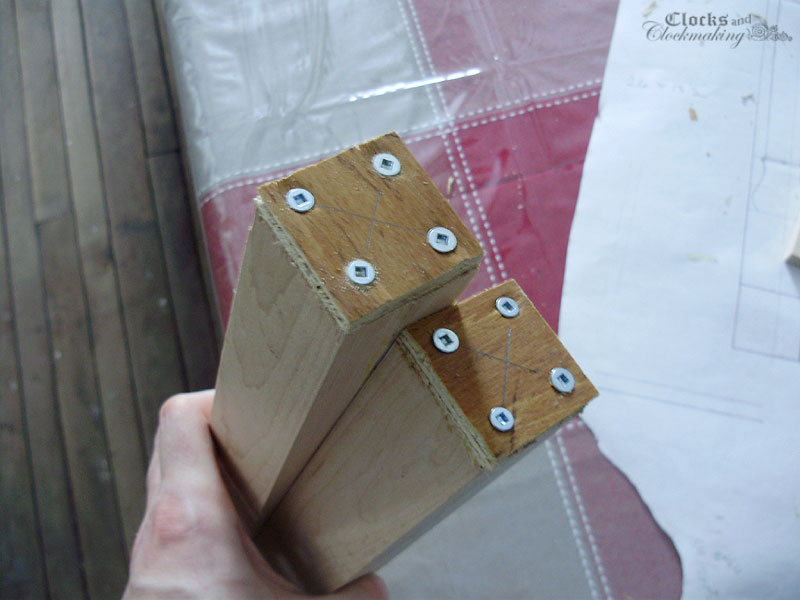 For the turnings, make a pattern to work from. There is a fairly wide variety of turnings used on these clocks, but most are along the lines of the three examples at the beginning. When it comes to the number of rings, most of the short ends have 2 or 3 (plus the tulip/blulb portion), but the centre sections can have as many as 9. Since my clock is slightly smaller, I decided to roughly divide the top turning in 3 sections, and from the size of those rings, (and keeping roughly the same proportions as most clocks) I ended up with 5 rings in the centre. I could have easily done 6 instead, but I preferred to have an odd number. This is another reason to have a full size drawing of your project. I drew one version (which didn't completely add up) on one side, and redrew the final version on the other side. After I had my pattern figured out, I cut it onto 1/8" scrap wood to bring with me to the lathe. If you are not good at figuring out patterns, you can simply blow up a photo of an existing clock and print it out (or just a section of it) at actual size. 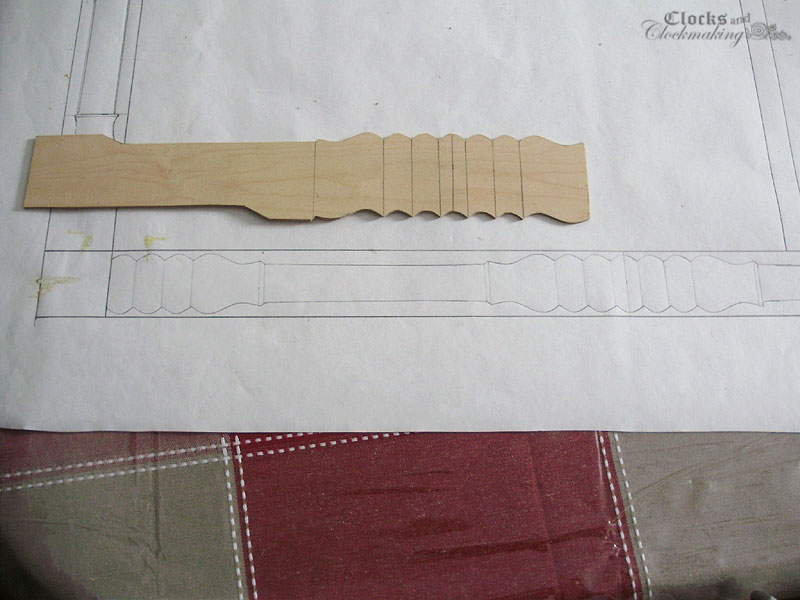 It's useful to have two (or more) calipers, for a consistent column size, and turned ring size. I used the calipers for the rough sizing, and eyeballed everything else. 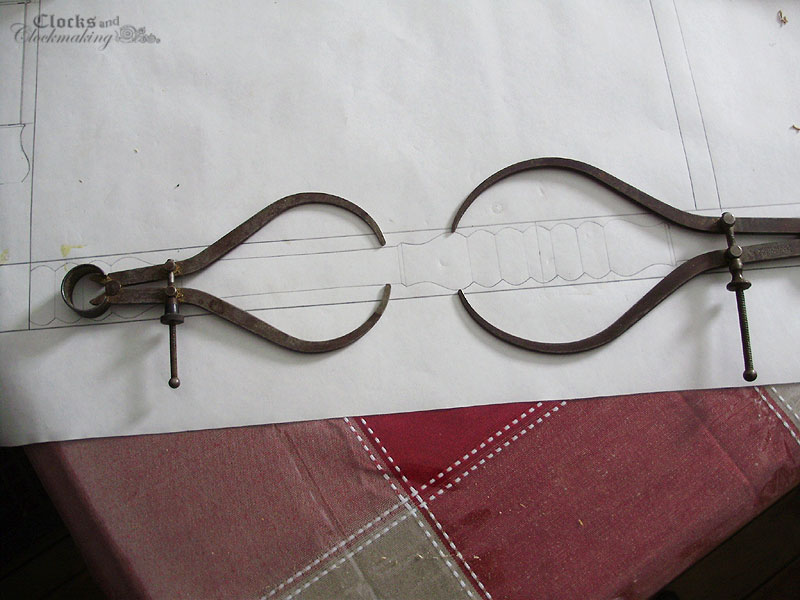 During the turning of the larger column, I ran into a problem with some wobble, and while adjusting the speed, the partially turned column got caught on the tool rest, and flew across the room. 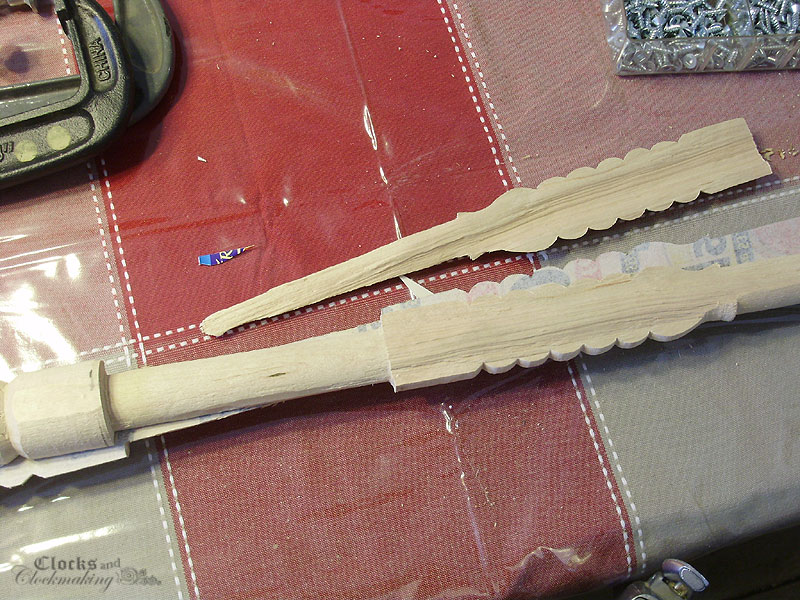 I didn't want to completely start over, so I decided to see if I could reglue both halves and the broken chunk, re-mount it into the lathe, and finish it. 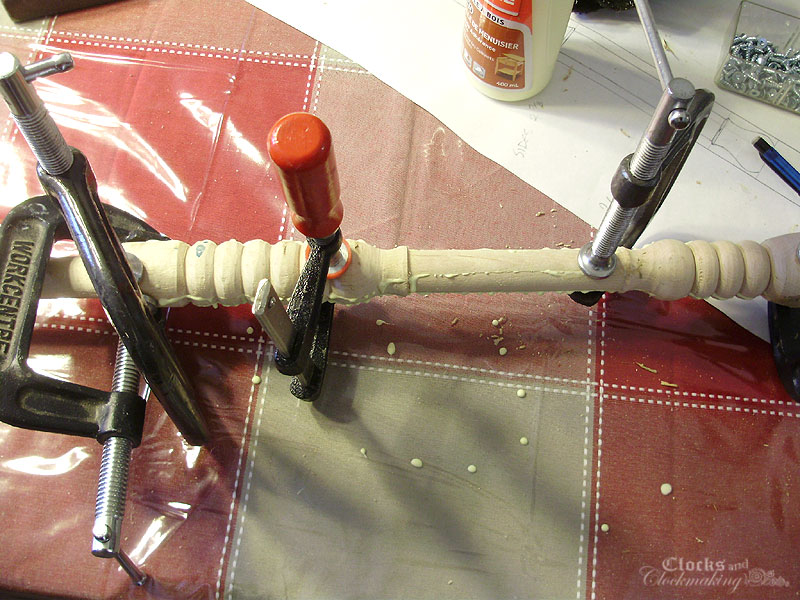 I was able to finish the turning with minimal visible damage, and any small nicks or glue joints would eventually be buried under gesso and gilding. Here are the split turnings trimmed to fit, along with the 4 corner blocks glued in place. 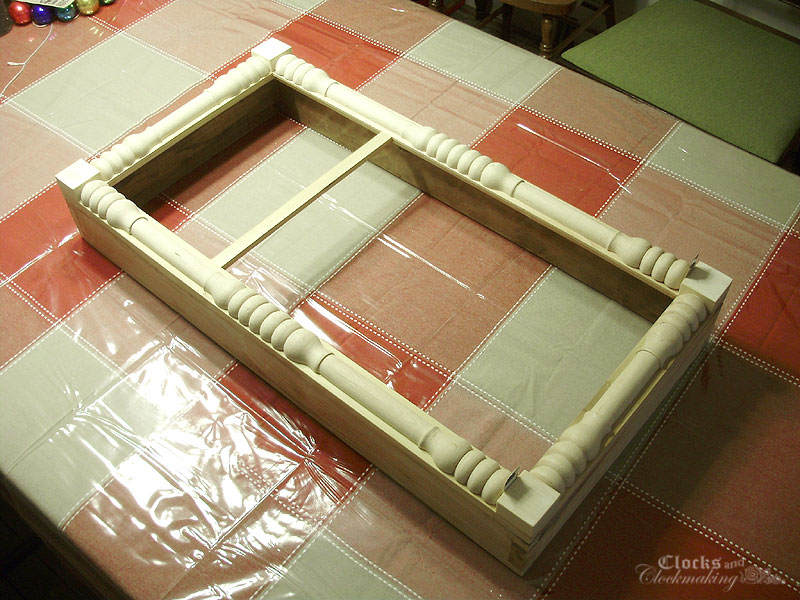 The backboard for the case was made of several old boards. Original clocks in most cases used a SINGLE WIDE BOARD for this, which is often around 14" wide. If you have access to wide old boards, use them, otherwise, try to have as few joints as possible. One joint down the centre would be the second best option. The backboard should be fairly thin, and it is sometimes feathered around the outside edges (on the back) with a plane. I made mine 3/8" thick. You can also go thinner, around 5/16", maybe even 1/4". Do not use plywood, no matter how tempting it may seem. 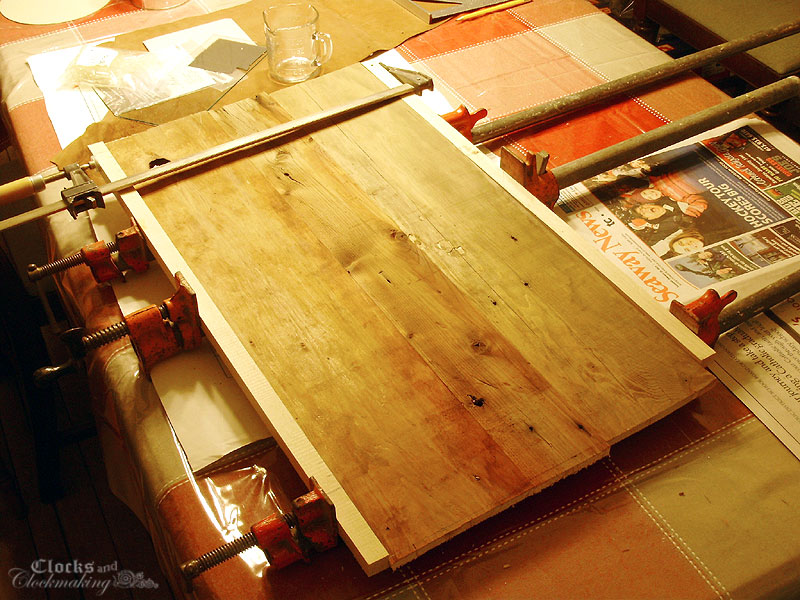 The back board is glued and nailed in place (preferably with square nails), with about 1/8" projecting from the sides, but flush at the top and bottom. No that is not a mistake, and yes that is contrary to modern building methods that take into account wood movement. Back then, they didn't seem to care as much about wood movement, and all the original clocks I've seen have had the backboards firmly glued and nailed across the grain (top, bottom, and edges). With this building method, there's a good chance that the backboard will split, but I don't see that as a big issue (just more "character"). If you really don't like this, you can install your back panel into a rabbet, and glue fake side mouldings to the edges of the case to look like the backboard "edges", but it won't look historic/correct. Some clocks have these two side projections cut square (basically just 1/8" reveal similar to what's seen on some Banjo clocks), while others are rounded over into a semi-circle profile. I chose to have mine rounded (see below).

This photo shows the case with the back attached, and with a few coats of gesso applied (more on gesso later). 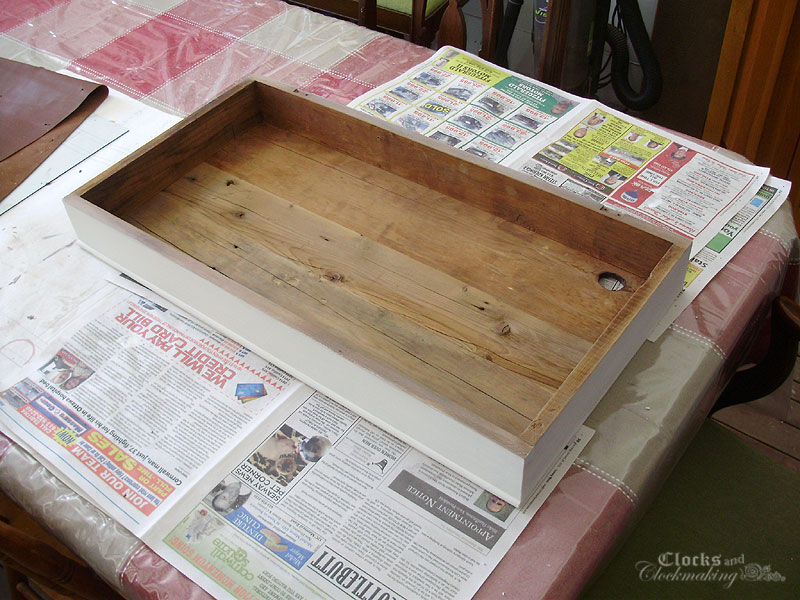 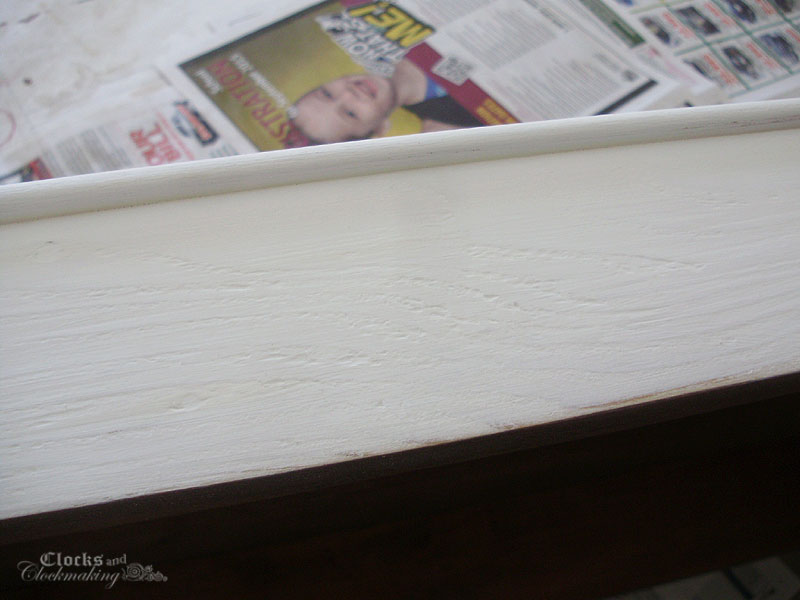 Part 2 will cover the process of gilding the turned columns.
Posted by JC at 3:59 PM