I went to an auction yesterday. The star attraction for me was a stunning French Comtoise longcase clock. I was really hoping I'd be able to take it home. Sadly, I was outbid on it, but I still wanted to share some of the auction items, and my two purchases.

First off, the star of the show, and the only reason that I dragged myself out of bed at 7am on a Saturday, the longcase. This is a French longcase clock along with its original grain-painted case. The clock dates from around 1860-1870, and it was in fairly decent condition. 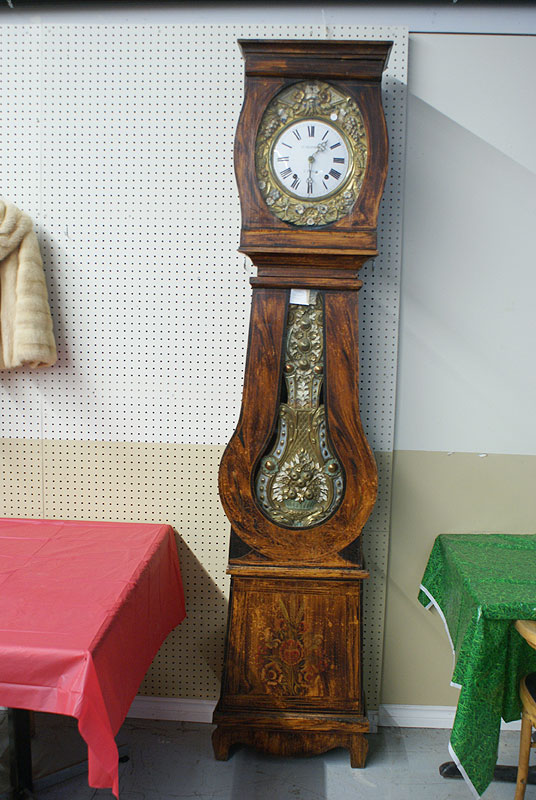 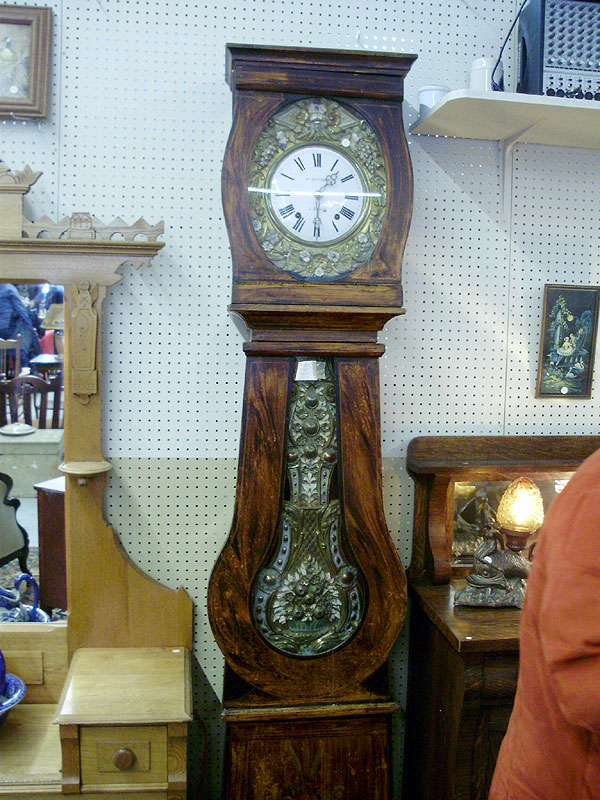 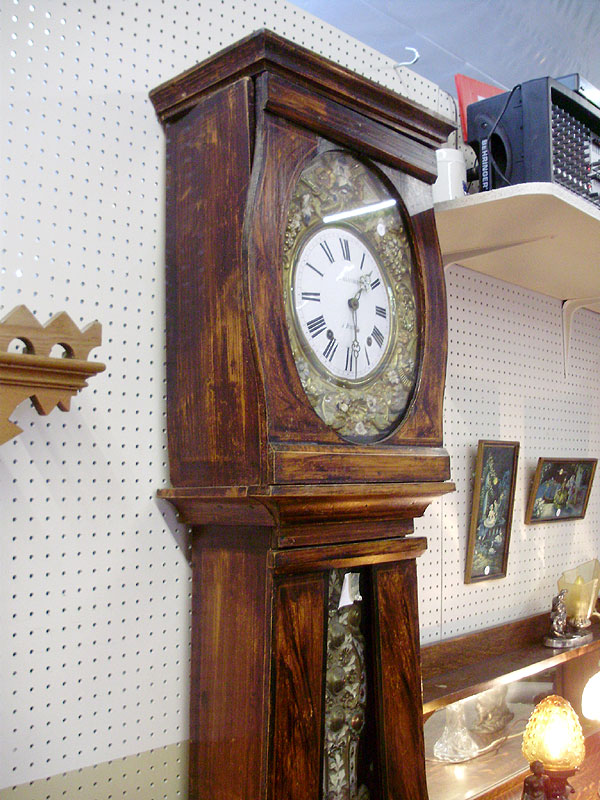 The case on it was pretty warped, very flimsy, and thin, but I've been told that they are all made this way. It's sort of like a fragile house of cards holding up a 30Lb movement. The grain painting and surface decorations were absolutely wonderful, and in excellent shape. The dial and pendulum were also beautifully painted (in the original paint) and in great shape. These are just thin stamped brass, and they get damaged very easily.

Some of the problems with the clock, however, were not going to be easy fixes. One of the major problems was that the original hinges of the trunk door were broken away. This means that there are chunks of wood missing from the door, and that some of the original hardware is now missing. The way these hinges work was basically just an eye bolt, with "L" shaped bent wires sticking out of the case body. These are very simple hinges, and you can just lift-off the doors if you need to.

Other small issues were that some of the boards on it were severely warped, like the left upper panel shown above. There was also a deep crack through the right side of the case which would have been impossible to repair. The clock also has no key, which is usually a very large crank. You can buy new ones, but old original keys are always much better.

The last detail I'll mention about the clock before I move on, is that it was much taller in person than I had expected. I'm 6' tall, and I think the dial bottom was at about my height. The clock was probably a little over 7 feet tall.

At the auction there was also another longcase clock, an Art Deco style German one probably from around 1900-1930. 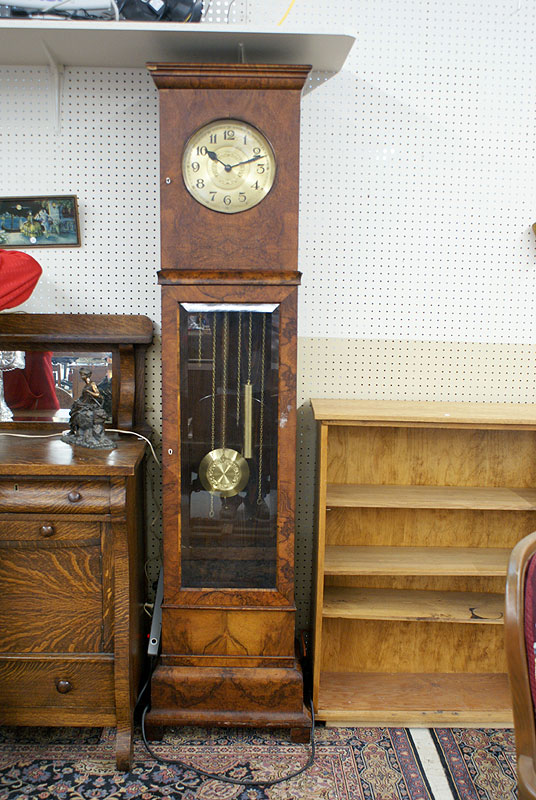 I wasn't really interested in this one, because I'm not a super big fan of Art Deco, and I don't think I'd like having this huge piece of furniture that I didn't absolutely love. It sold pretty cheap at 130$ to an antiques reseller (I spoke to him later on). It wasn't until after the auction was over that I truly realized how terrible the condition of this clock was. The man who bought it was trying to move it onto a dolly, and the entire top part of it was loose and broken from the rest. You could see screws into the wood that had been added (and that weren't holding it together anymore). I also noticed that the top door hinge had broken right through the wood side of the door and it had been very poorly reglued, and there was also a break in the wood case behind the hood door. On top of all this, I also saw that the two lock plates on the case looked like they were missing, so even though the locks and key were still there, you couldn't keep the doors shut. It also had just general problems visible from the start, like the chipped upper crown, and loose mouldings everywhere. Besides all this, the veneer on this clock was ABSOLUTELY gorgeous. I'm not even sure if it was burled walnut, or some other burled wood, but it was some of the nicest cuts I've seen on any similar clock (which is saying a lot). Even the sides were just as nice as the front (a lot of clocks and veneered furniture use cheaper or plainer veneers on the sides).

There were several other mantle clocks at the sale, but only two were worth photographing. This first one was a mint condition Seth Thomas "Black Mantle Clock". I don't know what model it was, but it had a Seth Thomas label on the back, and the plates were stamped ST, so it was all original. A lot of these clocks have been heavily refinished, so it's always nice to see original ones like this in good shape. I bid on it, but I wasn't willing to go over 100$ on it. Some are selling for much, much less on eBay these days. I think it sold for 120$ or 130$. 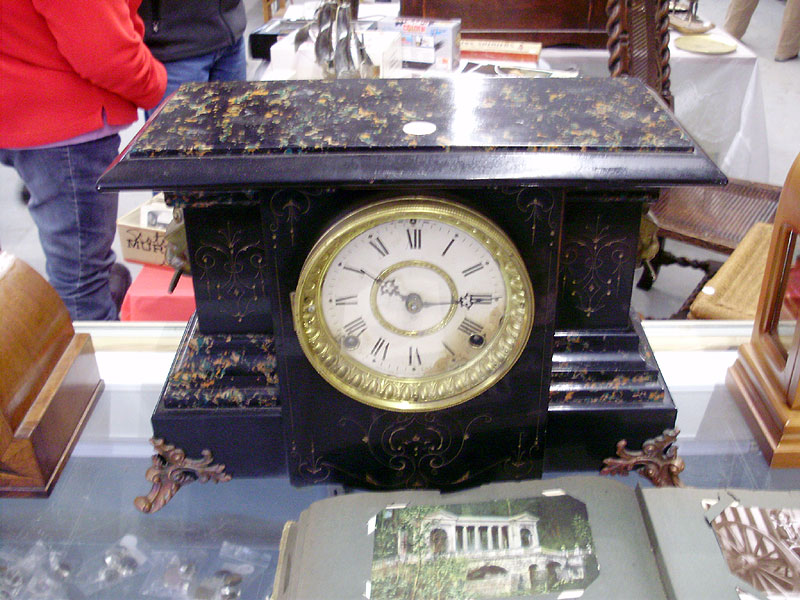 Another Art Deco piece. This one was a Perivale Westminster chime clock, from the UK. I'm told that it's not the best brand to look for if you want a Westminster clock. I think it sold for 75$. IT was in very good shape, and it ran, because it started up during the auction and kept ringing during the day. So did the Seth Thomas, actually. 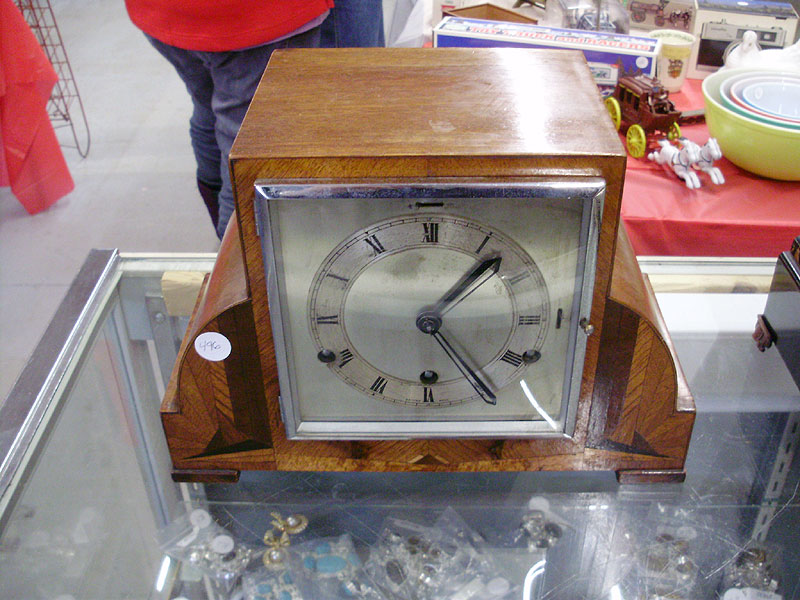 If you're curious to see some of the other items from the auction, and what I DID buy, go visit http://my1923foursquare.blogspot.ca/2015/02/auction.html.

As the auction was starting two wrap-up, I got a chance to talk to the guy who bought the Comtoise. He's a local collector as well, and he seemed like a really nice guy. I helped him take the clock apart (we had a VERY hard time unhooking the pendulum, because the mounting piece had a bit of a curve to it in the opposite direction that was needed for easy unhooking). He tried for a good 5 minutes, then let another lady we were chatting with try, and then I offered to try and I managed to get it off safely. Once the bob was off, we noticed an old dark paper label on the back. It said something like "Balancier...??? fleurs" and I can't remember the city or town name. Basically it indicated that it was a floral model pendulum.

He was trying to get the clock case onto a dolly, but it really wasn't going to work, so I offered to help him carry it to his van. I think I would have been really pissed if he managed to ruin the case just by trying to leave the building with it. Plus, I wanted to be nice, in case he decides to come to me for repairs (I gave him my info, but I never even got his name).

Work continues on the mirror clock project. The case is not finished because my planer blades are gone out for sharpening, but the beautiful gilded door is finished, and so is the ornate reverse painted glass tablet for the dial, and I have a custom movement that a clockmaker friend is making for the clock, so stay tuned!

Here's a teaser photo for now. 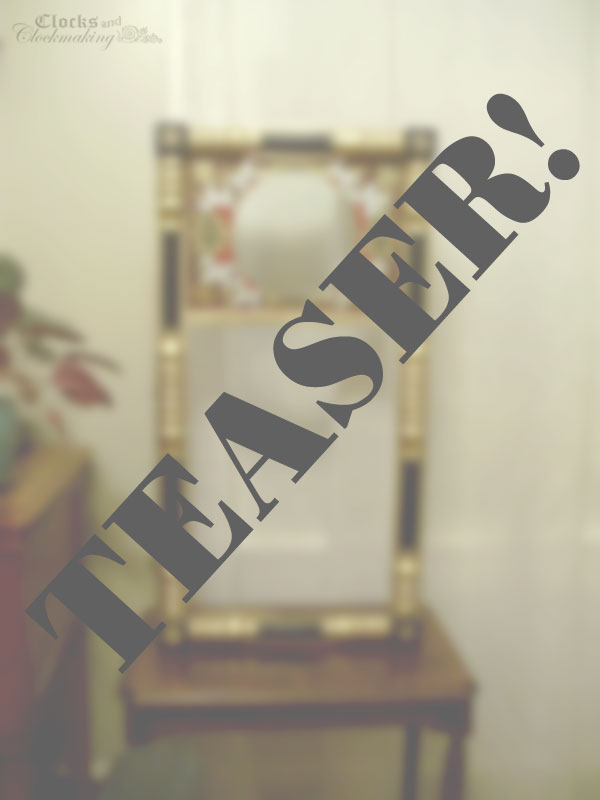