I recently acquired these two clocks locally. One was clearly a run-of-the-mill gingerbread clock (in rather nice shape), and the second one was for a plain looking mantle clock. This was for sale locally through Kijiji (similar to Craigslist) with a single photo, and a rather brief description: 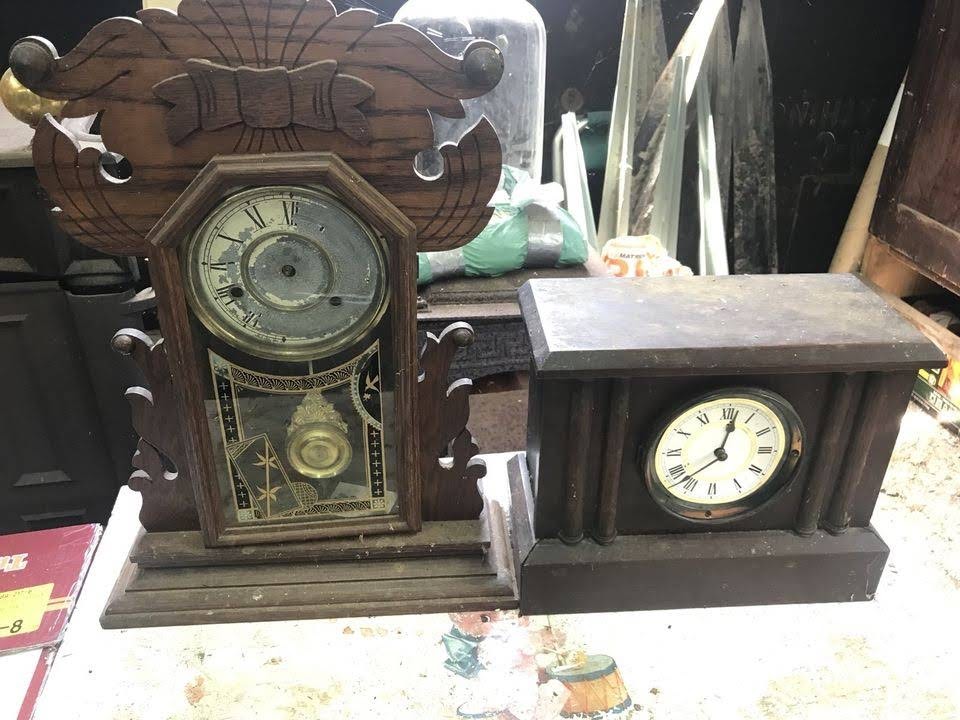 I was almost tempted to buy only the gingerbread clock, but the price was so cheap I decided it may well be worth it to get the mantle clock for parts. Since the seller was just on the outskirts of town (and I have no car), I asked him if he'd be willing to drop them off, and I sweetened the deal by offering 40$. He counter-offered 45$ but I felt this seemed a bit greedy as I had already doubled his asking price, so I didn't reply. A week later he responded and said he'd take the 40$ and he could deliver them.

When he dropped them off, he mentioned that they had recently come out of either a barn or an attic recently. The first one he pulled out was the mantle clock, and as soon as he handed it over to me, and I saw that it was solid 1/4 sawn oak, I knew it was not going to be "junk" or "for parts". After he left, I took a closer look at both clocks. The plain mantle clock had an ill-fitting modern dial stuck to the original dial plate (hiding the winding holes), but the clock had its original CHROME PLATED movement, and a telltale gong block, and the original pendulum bob. My suspicions were confirmed when I turned the clock over and saw the original label.

The clock is an Arthur Pequegnat!

Pequegnat clocks are highly prized and collectible (especially up here) as he was one of the only few Canadian clockmakers to exist here in Canada. We certainly had lots of clocks here, but they were all largely Connecticut made USA clocks with overpasted labels. There were primarily only two major clock companies that were Canadian. One being Pequegnat, and the other being the Hamilton Clock Co. As a result, these clocks are much more scarce, and collectible. In all my years collecting (since 2004) this is the first one that I happen to come across (other than online). 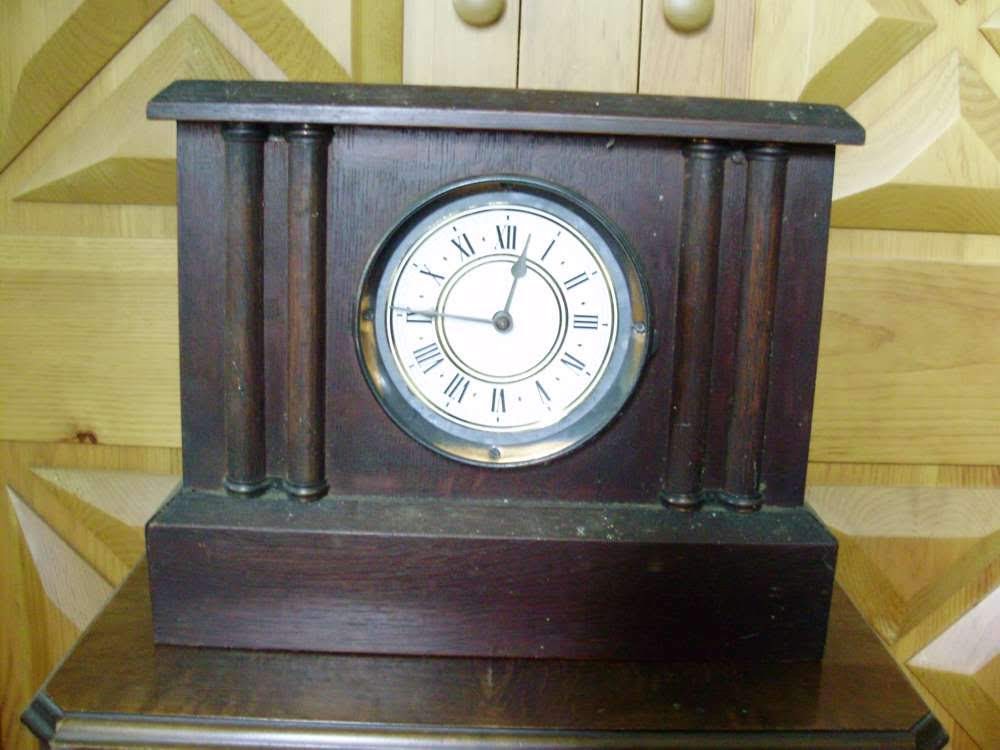 Pequegnat clocks have this specifically shaped gong block/stand and I don't believe any other company used this pattern: 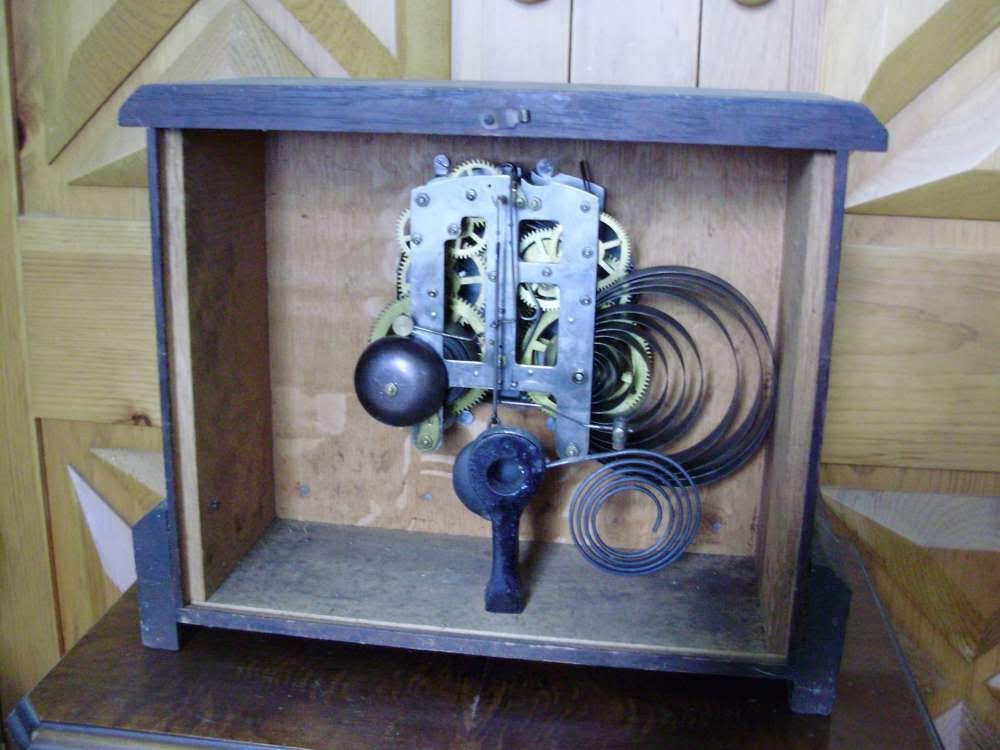 This particular model is the Pertoerboro (the name of a city in Canada): 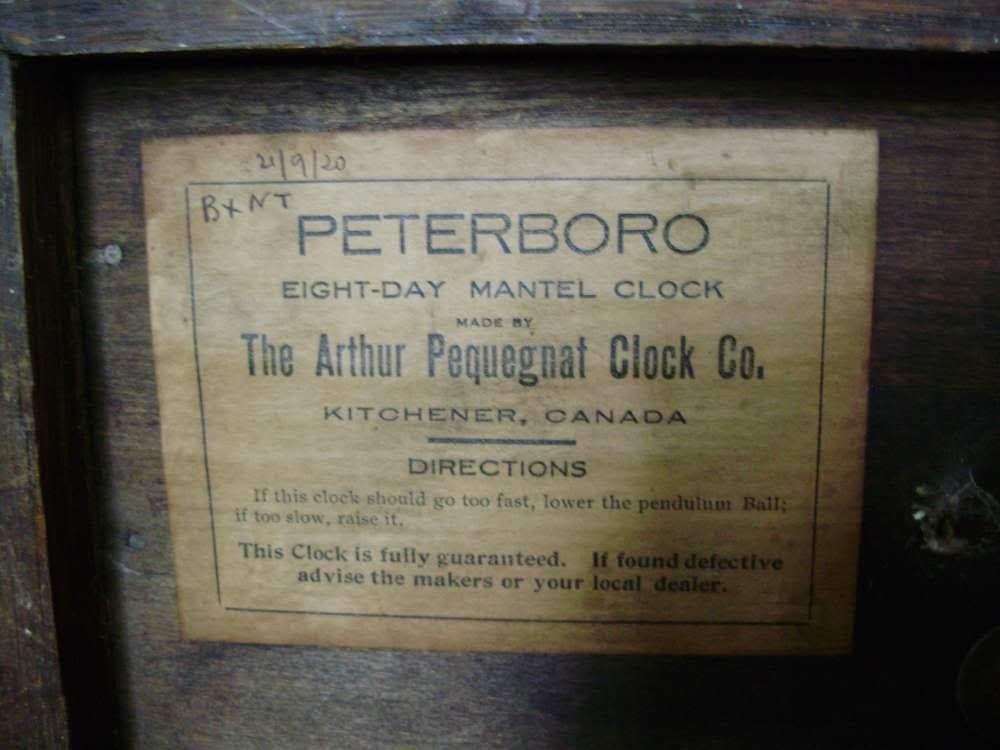 It is not a very early Pequegnat clock, however (which would be more desirable). It bears the name "Kitchener Ontario", which was formerly known as Berlin Ontario. The city changed its name shortly after the war, as Germany was not popular at that time for obvious reasons.

I thought that the chrome-plated key might be original, because it matches the chrome plated movement, but it's not a good fit. 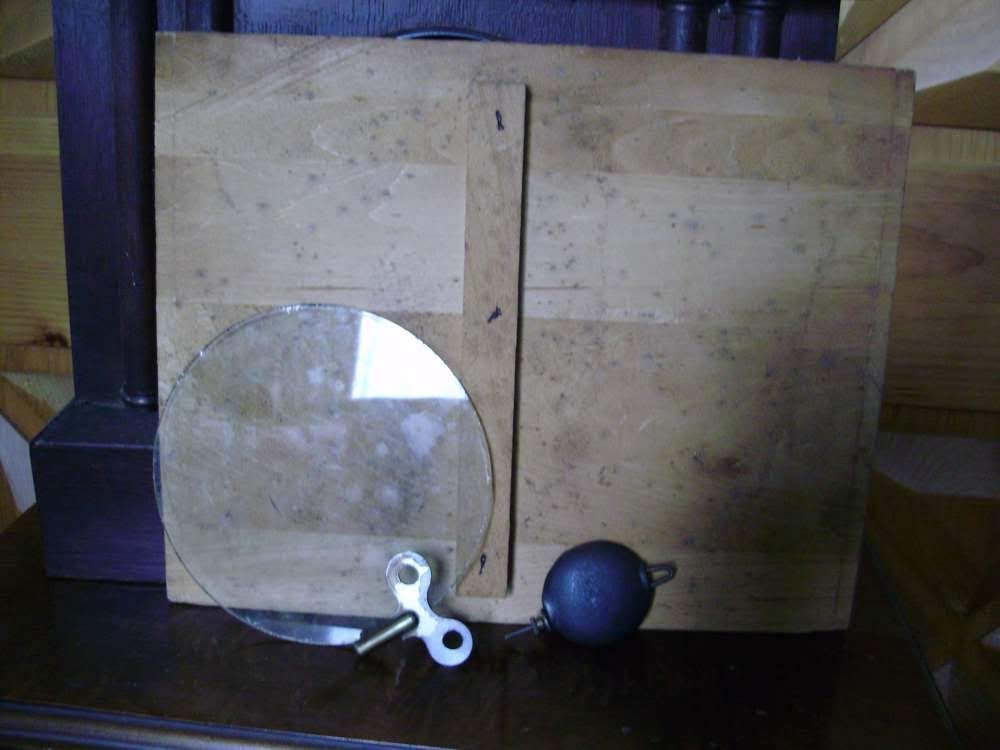 The gingerbread is a New Haven, and it also has a complete and intact label which identifies it as the DUXBURY model. However, even with the model name, it doesn't appear to be in any of the catalogues from the company. The fact that it uses a multicoloured glass (mainly gold, but with added sections in black and blue) would make me think that it's before 1900, since this detail was largely on earlier clocks, and phased out in later ones to save time, materials, and money. 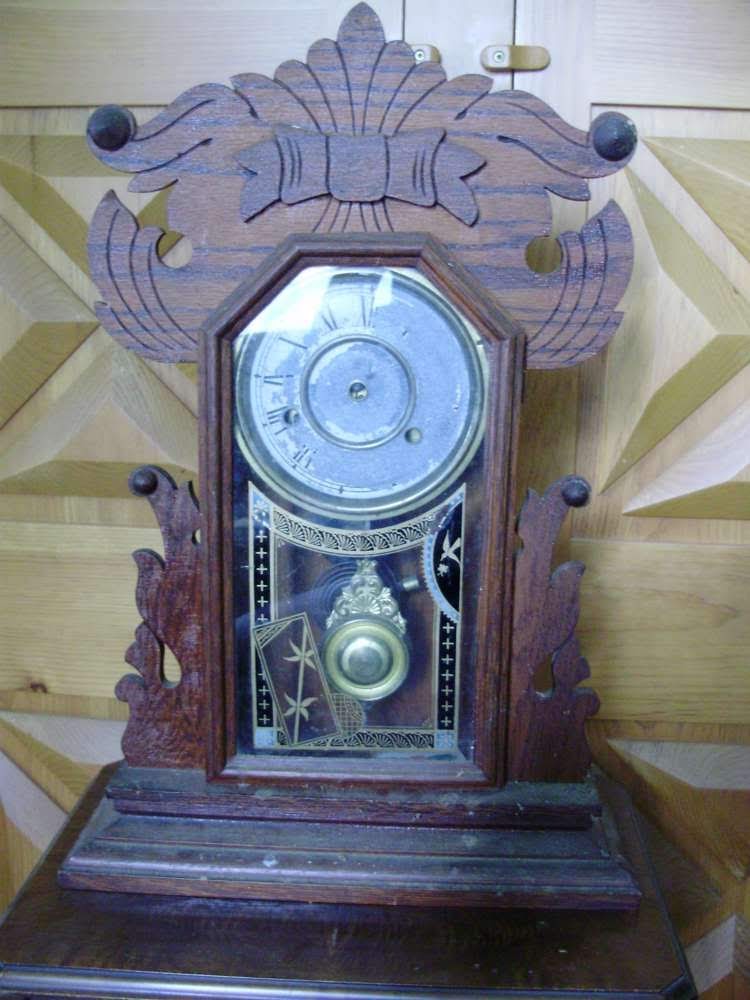 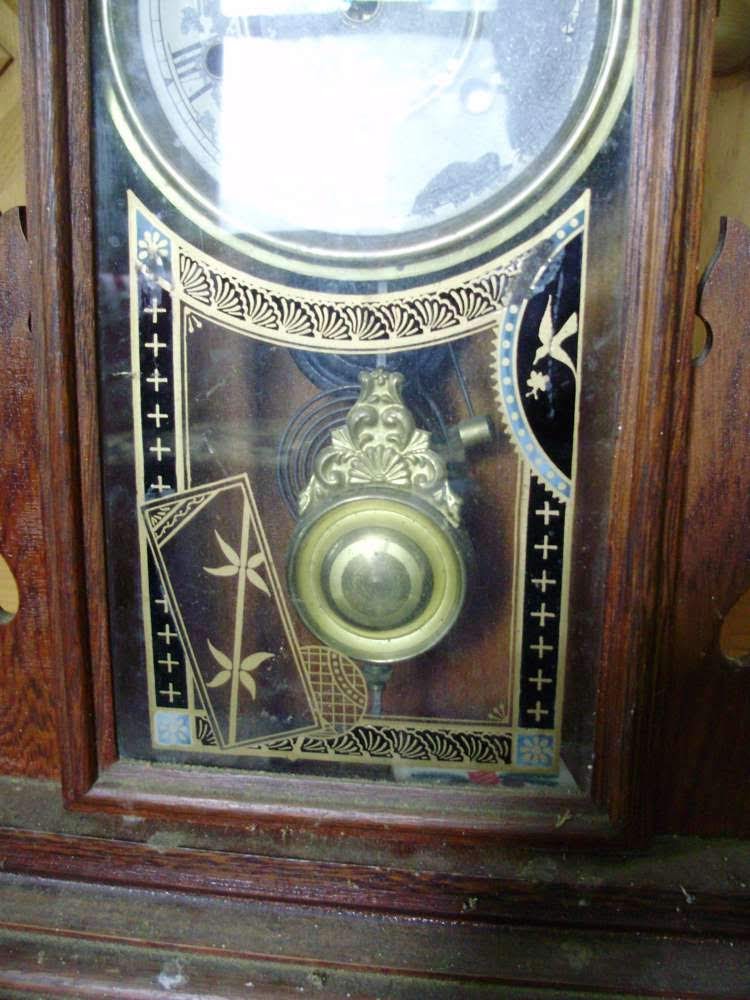 Someone had added a nail with a plastic tube into the base as a pendulum fastener (I ended up removing this -not because it doesn't work, but because it's just plain ugly). The original hands are with both clocks. 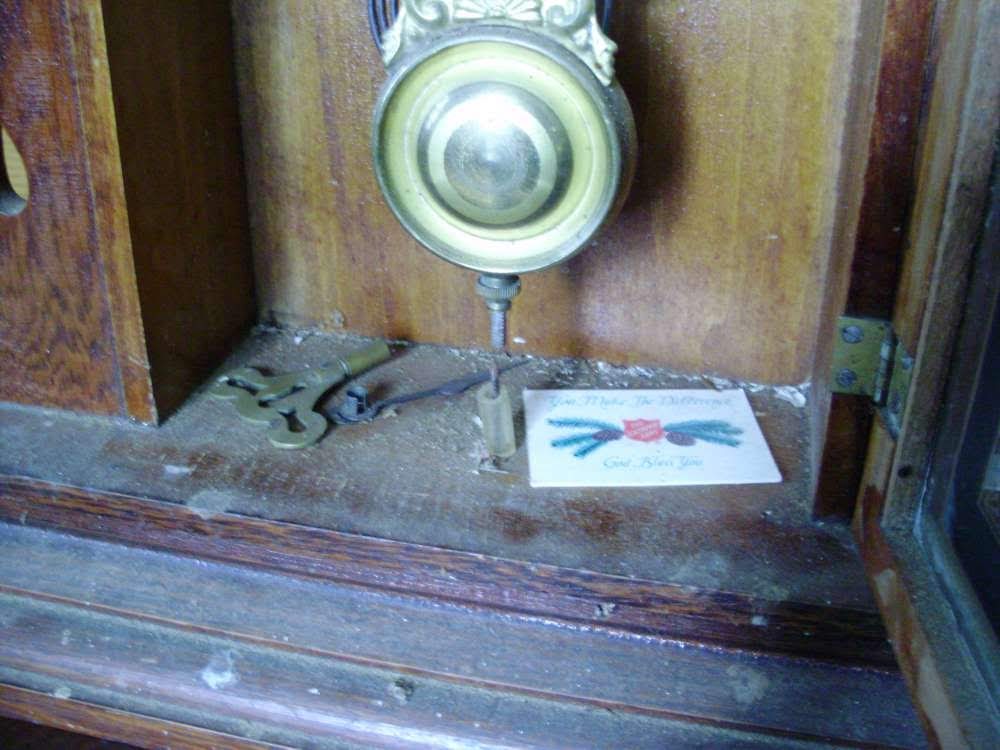 Seems like this movement had the option for an alarm, but one was never fitted. 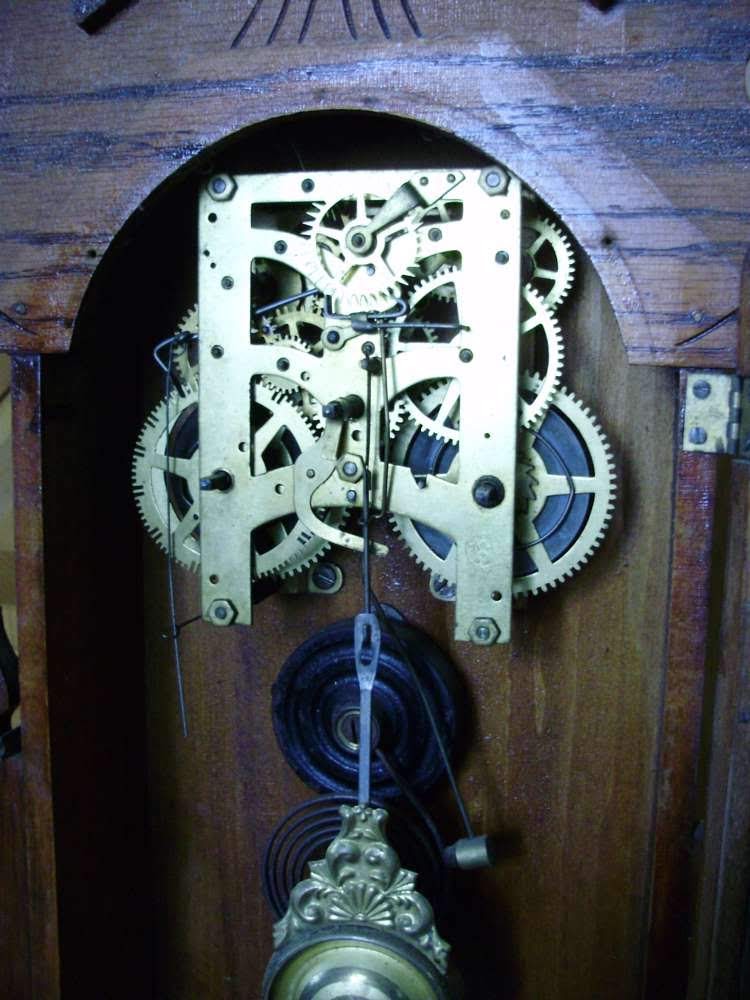 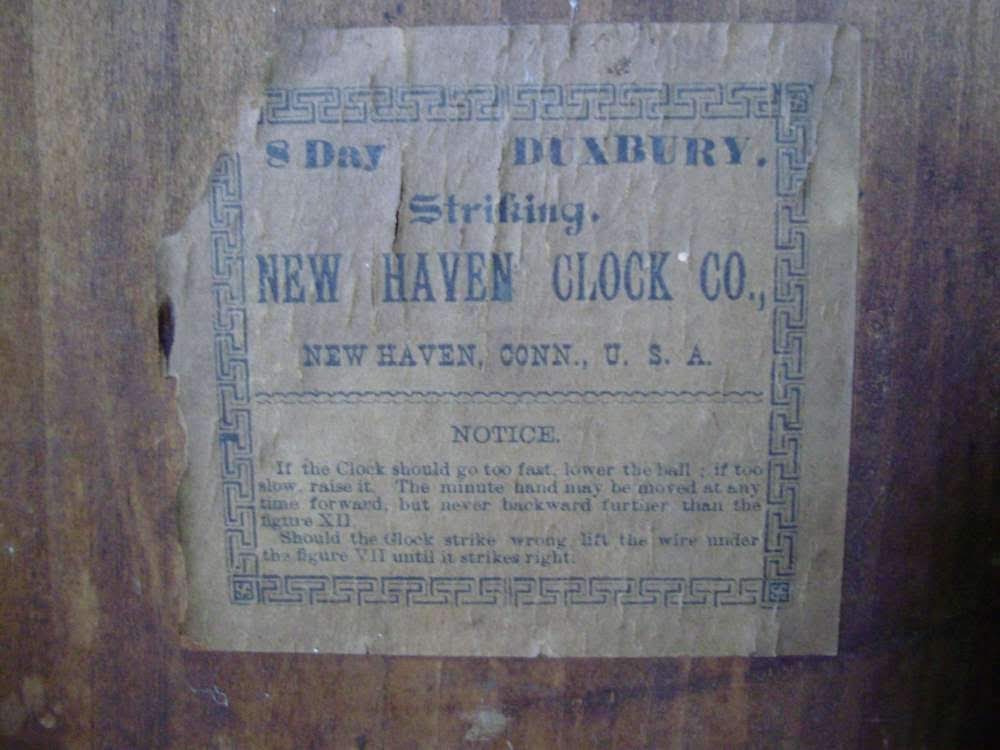 The gingerbread needs to have the crest reglued to the body, and a new triangular glue block on top behind the crest. The latch tip is also broken, and the movement needs cleaning. The main issue with it is the dial. This is the original painted dial, but 90% is flaked off. A paper dial is not a good option, as this dial is recessed and curved (it's not flat).

The Pequegnat has similar condition issues. The case, movement, and parts are all there, it's just the dial. It originally had a white-painted zinc dial with silk-screened fancy numerals. The shadows from the original numbers are still faintly visible on the zinc, so I can tell exactly which design it used to have, which is this: 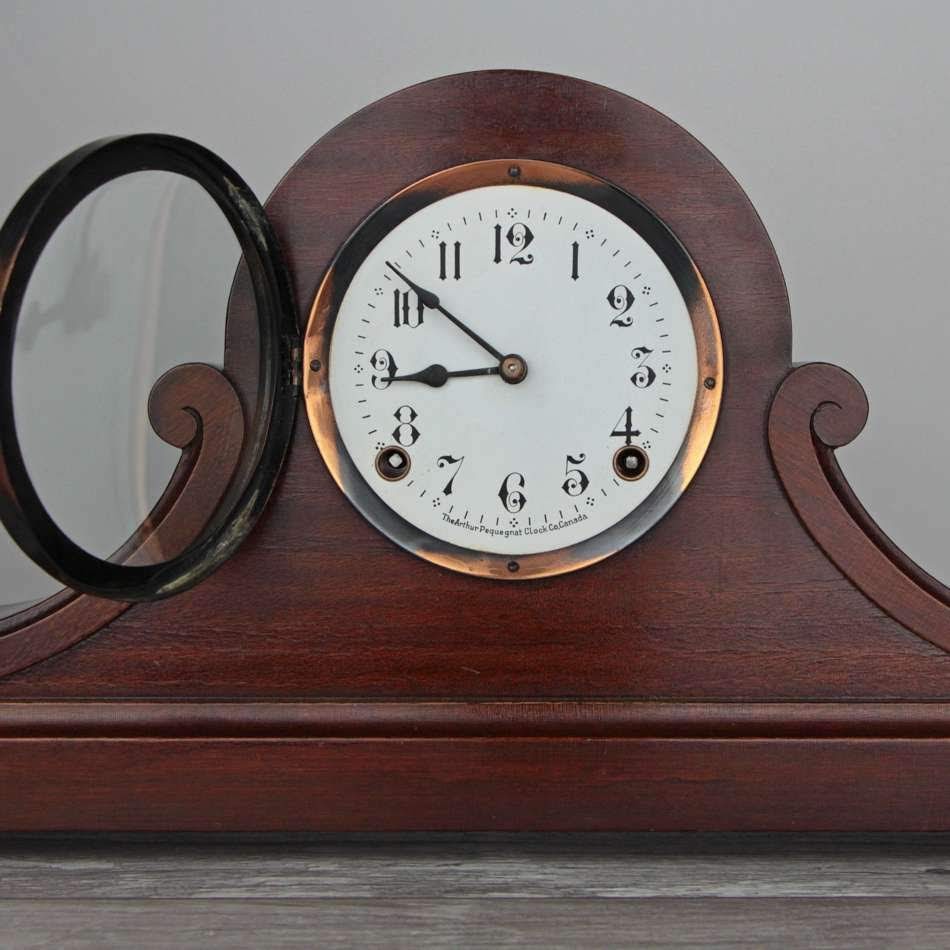 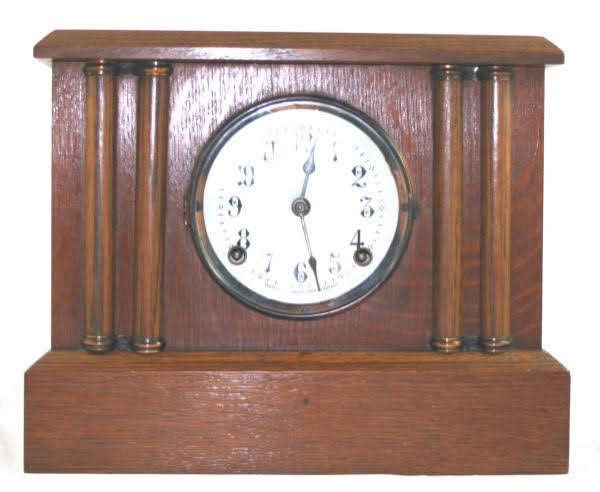 This is a rather specific "Fancy Arabic" pattern, with more of a Gothic type font (square zero) and 4-dot hour markers. No paper replacements match this, and hand-painting this would be exceptionally tedious and time consuming. The closest pattern commercially available is also only available with the Ansonia label slapped on it: 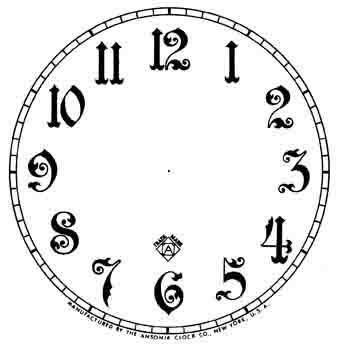 I will likely custom-make a printed dial for this to match the original style.