This is a fairly ambitious project that I've already been working on for quite some time. I purchased a loose longcase clock movement on eBay back in 2009, knowing that the wheel count seemed to suggest it might be a month-going timepiece. It had obvious pieces missing, and some condition issues, but the price was fairly low.

The following photos show the movement as-received, with no repairs or cleaning done to it.

The front of the movement. Note the circular cutout on the right hand side, screw hole (and locating pin hole), and the missing pin on the small motion works wheel. This was for a passing strike system.*

The back of the movement. The hole on the left side is for the hammer arbour. You can also see the bell stand holes, and the holes for the hammer spring in the lower left. Additionally, there are two or three additional holes on either side of the crutch near the bell stand, and I have no idea why those are there.

Bridge for crutch and pendulum, showing poor repairs to the crutch (solder), evidence of the bridge being relocated (extra holes and pins) and mismatched screws. Also note the threaded hole for the bell stand.

Interior wheel train. A standard 8 day movement will have 4 wheels, and will wind clockwise, whereas a month-going clock like this one will have an additional wheel, and it will wind counterclockwise.

The escape wheel is in terrible shape, with 2 poorly repaired teeth. At one point, a slip of hardened steel was soldered to the exit pallet of the anchor. The pallets were likely very worn, and this repair is why the back bridge was raised.

A poor repair to the original brass clickspring. I love the delicate shape of the click. Also notice some severe corrosion spots to the brass in a few places.

The shadow of the hammer spring on the back plate.

Inside plates. There are several old handmade bushings installed, some punch marks, and corroded areas.

The movement came without a pendulum, hands, dial, key, or weight, but it did have the original brass pulley with it, which is really nice to have.

So with that, what is the plan, and why is this an ambitious project? Well, I want to turn this into a month-going Joseph Knibb-style ebony longcase clock, done in the style found in London circa 1680-1690. Such a clock requires a fairly short case, and a fine 10" brass dial. Adding to the challenge is that I have very expensive tastes, on a nickle and dime budget.

The case I want to copy (with some small alterations) is this Joseph Knibb longcase: 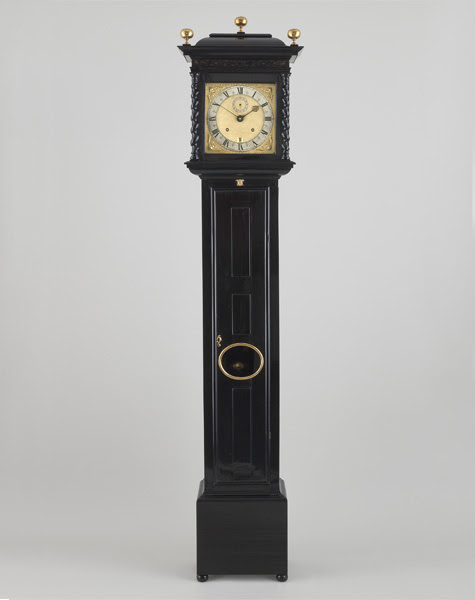 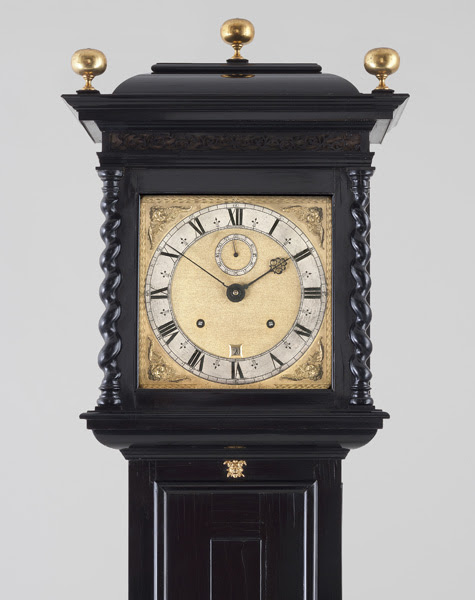 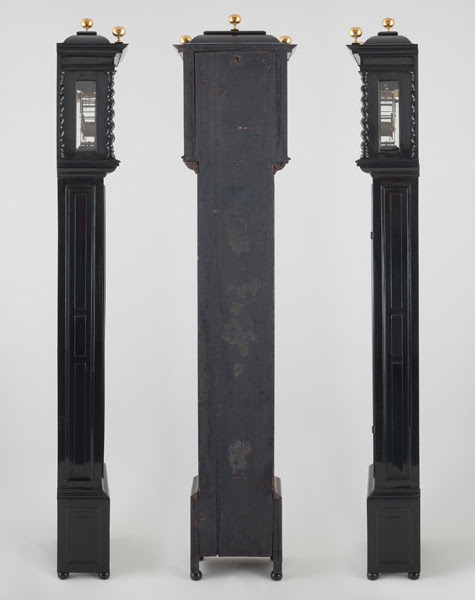 The modifications would include no opening in the trunk door (just 3 shallow panels), no panels on the base sides (panels on the 3 trunk sides only), and no satire mask decoration above the trunk door. Everything else will be basically the same. For a long time I thought of making a case with a flat top but I really liked this one. The mouldings will not be exact matches. I will get them as close as possible without having custom knives cut. The clock case will have bun feet, and a rising hood (but no spoon latch). To save money, the case will be built largely of pine, poplar, and maple, which will all be hidden by the ebonised finish. A traditional case like this is usually built from 1/4 sawn white oak, veneered in ebony or ebonised fruitwood such as pear.

The clock movement currently has all the missing components fitted: a passing strike, which is a rare find on a longcase movement, a dial, custom cut steel hands, a custom made lead weight, and a pendulum. Several of the following posts will go over the process of rebuilding all these missing components (with very limited tools), as well as building this fine case.

* A passing strike is the most simple strike system possible, and it involves the raising and releasing of a hammer to strike a bell one single blow on the hour. It is commonly used on "temple style" black mantle American clocks for the half hour bell strike. This system is also occasionally found on New Hampshire mirror clocks, and Massachusetts shelf clocks. The system uses a lifting pin on the motion works to raise the hammer. The hammer is either assisted by a spring, or falls by gravity.
Posted by JC at 2:26 PM