I had a client who dropped by last night for me to look at one of his clocks (a typical 1930s or 40s balance wheel Westminster clock), and he gave me this clock: 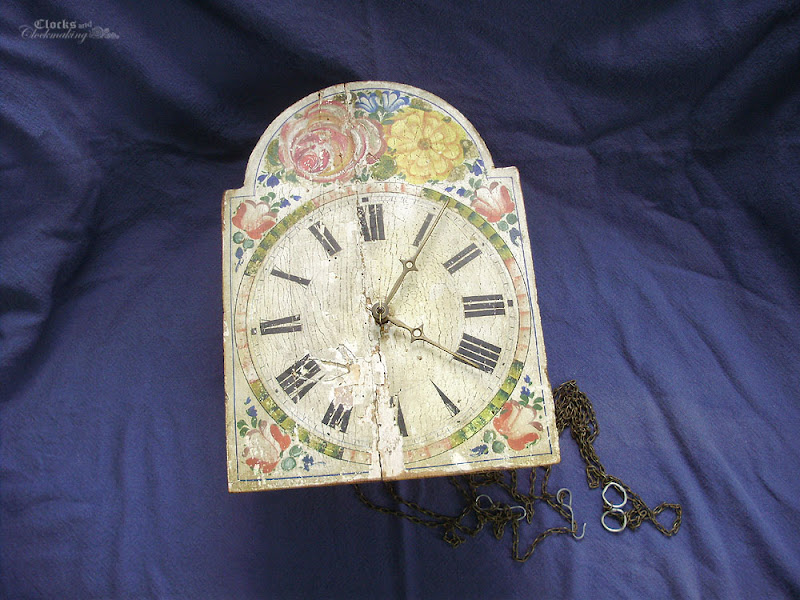 At first I was thrilled, but having a closer look at it, I could see why he wanted to part with it. He told me it didn't run well, and it would strike continually. He was going to THROW IT IN THE GARBAGE, but he thought I might want it for parts.

While the clock certainly has a plethora of issues, I'm very happy that I'm able to save it from the landfill and put it right again. I'm excited to work on it, but at the same time, I also have too many other projects started right now, so it will have to wait.

The clock is a Black Forest (German) Wag-on-the-Wall clock with a "shield" dial. These are fairly common, but the primary value is in their beautifully painted colourful dials. Many consider them great examples of Folk Art. 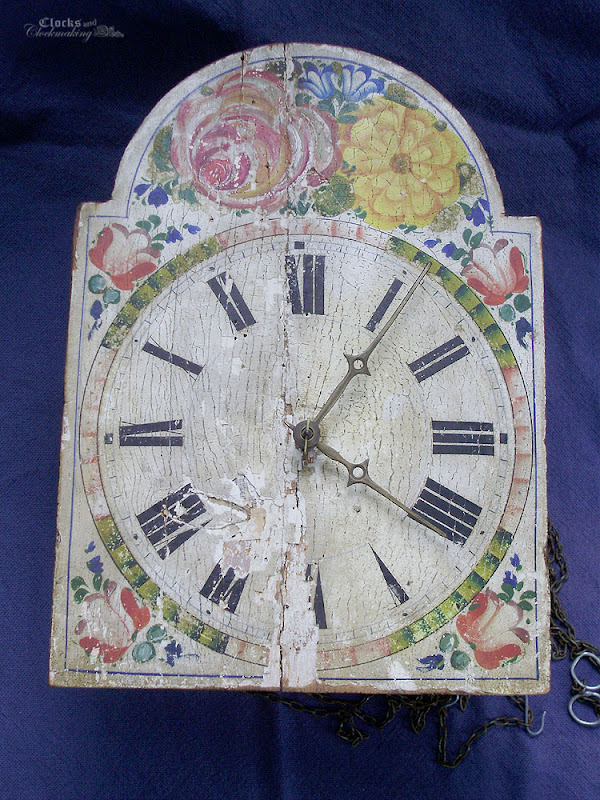 This one is gong-strike with steel arbours (the very early ones have wooden arbours and strike on a bell, or occasionally even a glass bell with a wooden hammer). The dial on this one is roughly 13" x 9.5", which makes it a "medium" sized clock. I also have a miniature one, and there are larger ones (16" tall or so).

Both side doors are later replacements made from cigar boxes. 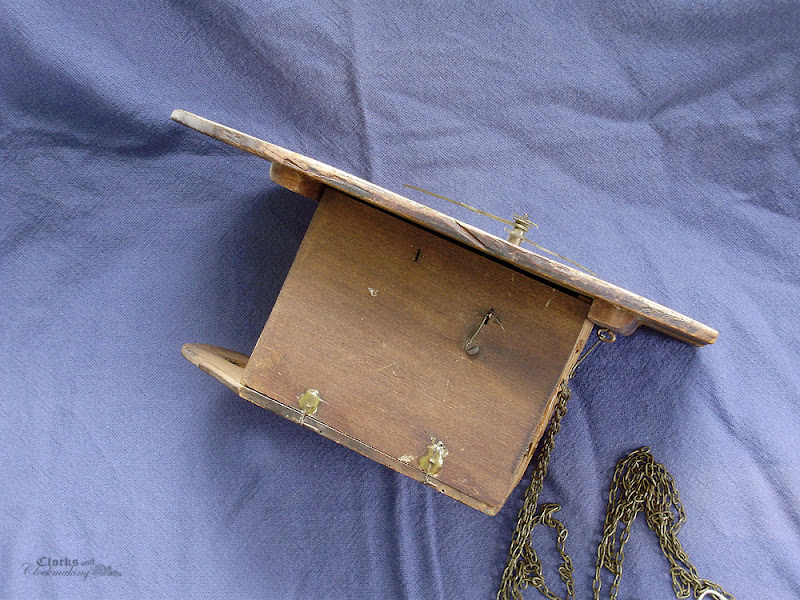 Replaced gong from a mantle clock. One of the major problems with this clock are the screws that were added everywhere. These have unfortunately permanently damaged all the plates and components. Luckily, all the gears and levers are original and present. I was also especially happy that the chains are still with it. Matching a chain can be incredibly difficult. 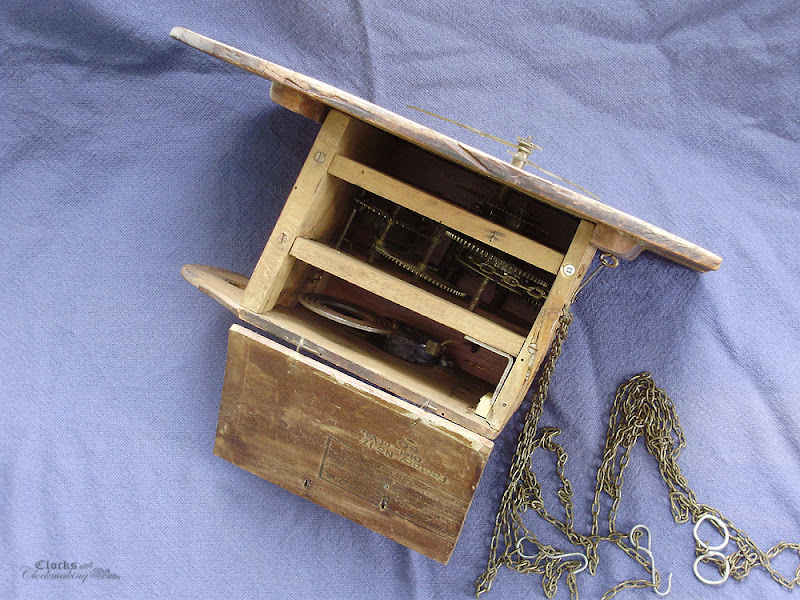 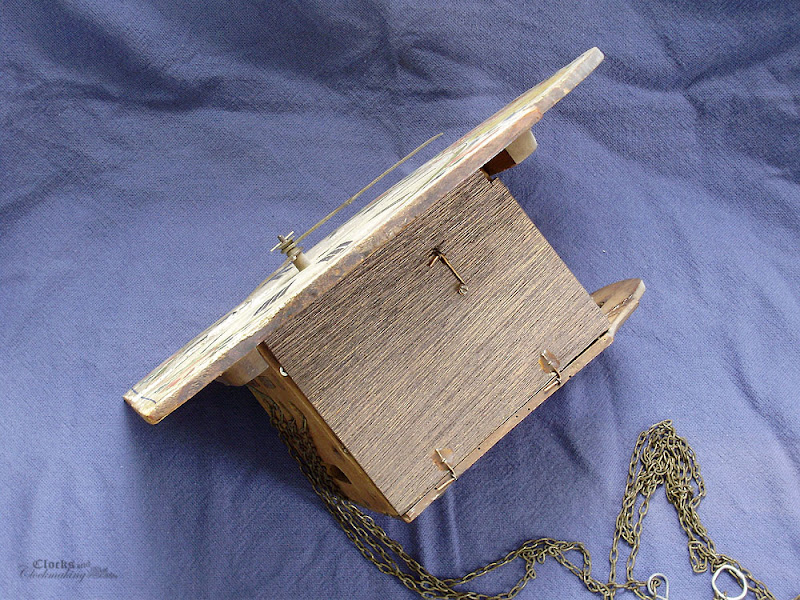 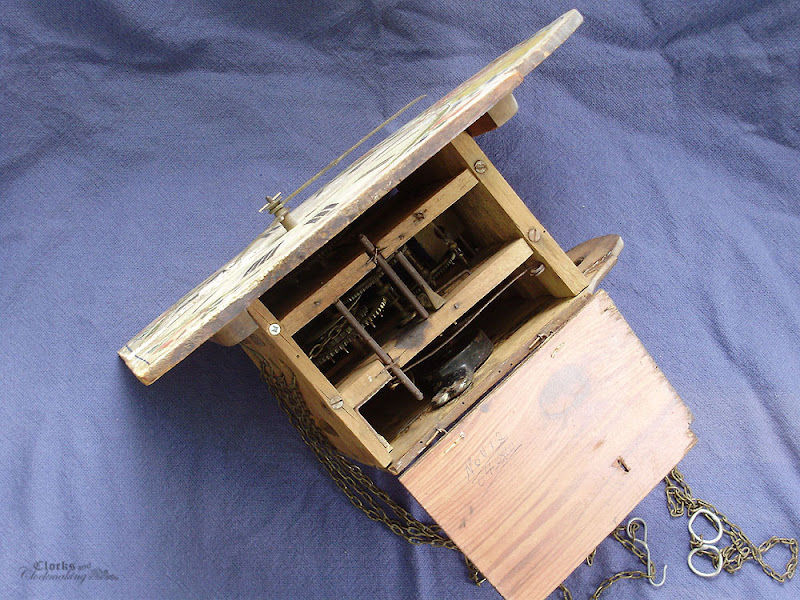 The dial, top plate, and backboard have woodworm damage. This doesn't dramatically affect value, or the integrity of the piece, but I will have to carefully check that there are no active beetles left in the wood, and add a chemical treatment to be extra safe. Woodworm (a small beetle) is a common problem with antique European clocks and furniture. 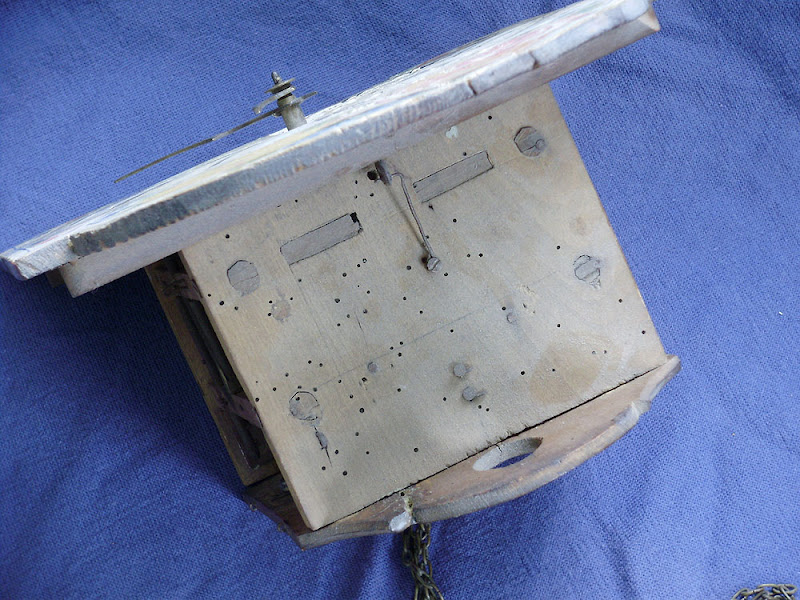 There is what appears to be either yellow glue or epoxy on several parts of the wooden frame and back. 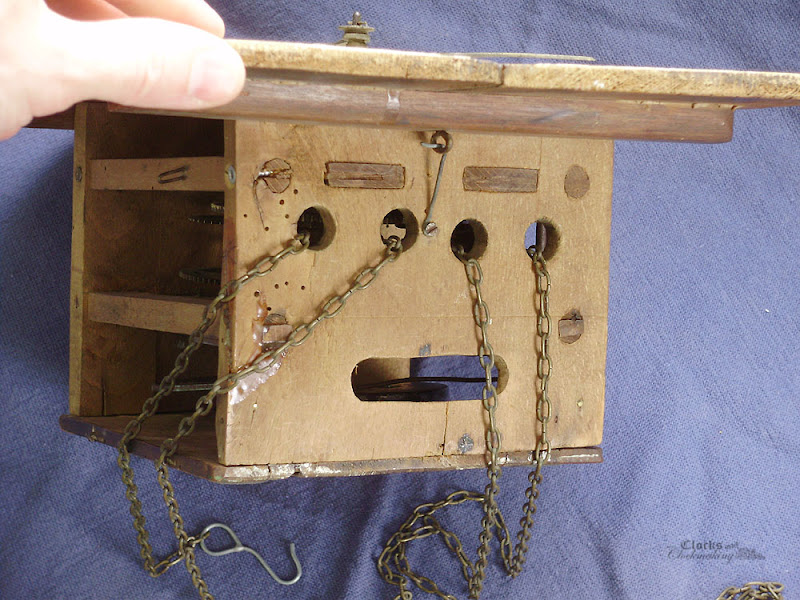 The entire movement box has a rake to it (from loose joints and a poor regluing effort) so foam pads were added at some point in an effort to straighten the clock. The foam may also have been to dampen the sound of the gong. 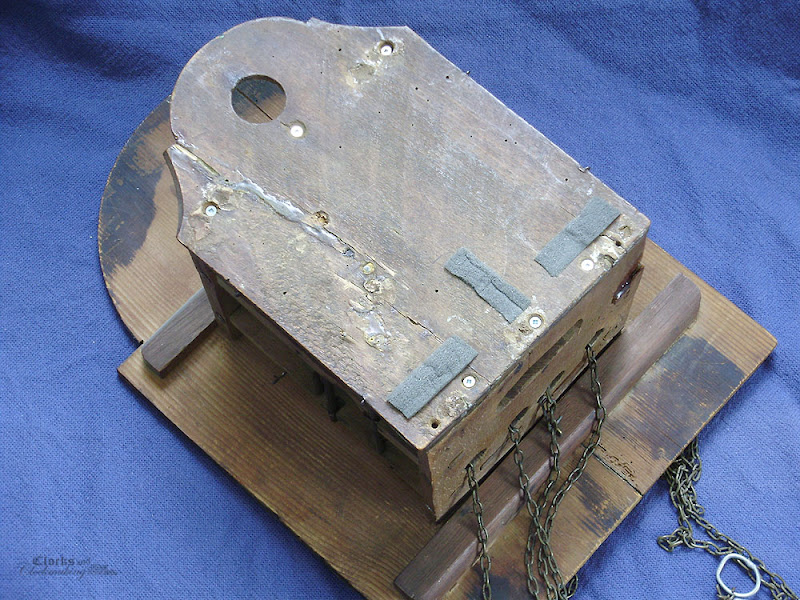 This glue will be hard to remove. I may need to soak the wood in water, or use strong chemicals. Again, there are screws everywhere. 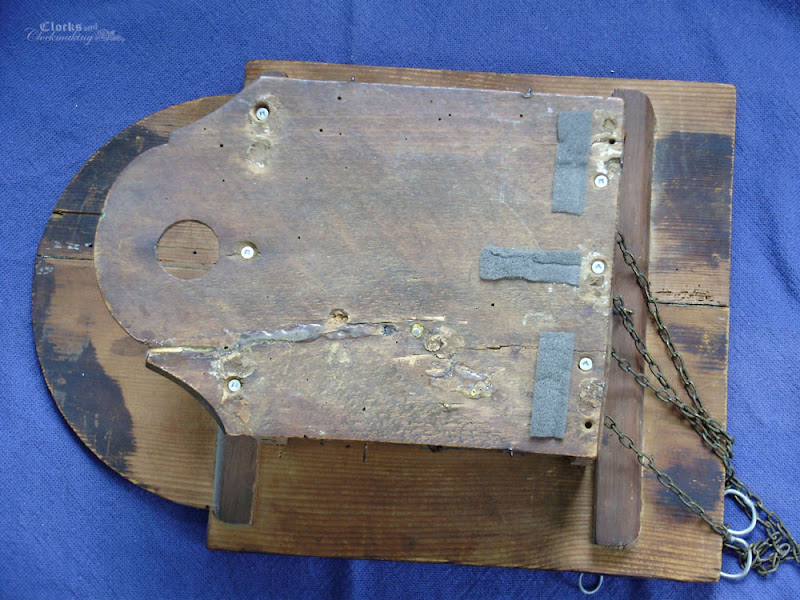 You can really see the rake in this photo, and how all the wheels are angled from the slope. Also note the metal "L" bracket in the lower left. 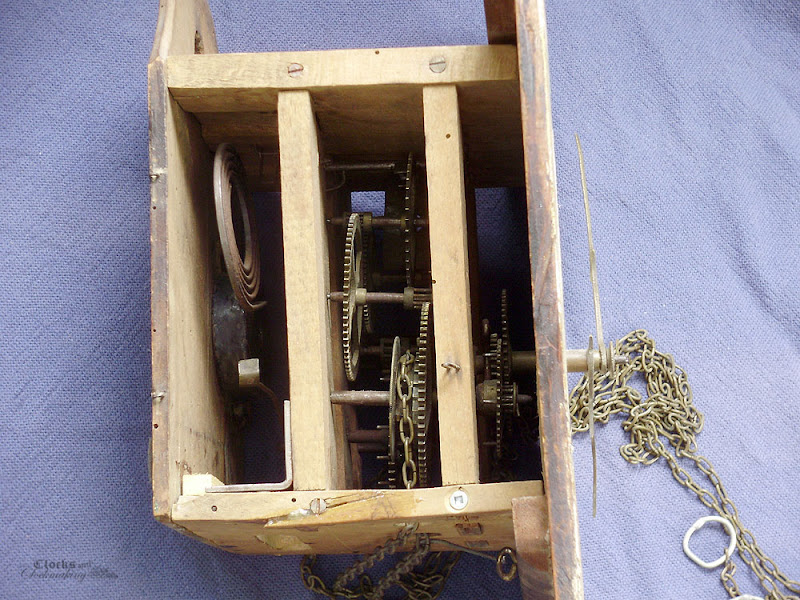 The clock came with "parts" but all of them are "make do" replacements. The pendulum is especially rough, and far too heavy (there is a lead plate on the rear). The weights may also be too heavy, and I'm not sure why one is so much larger than the other (they should be the same). 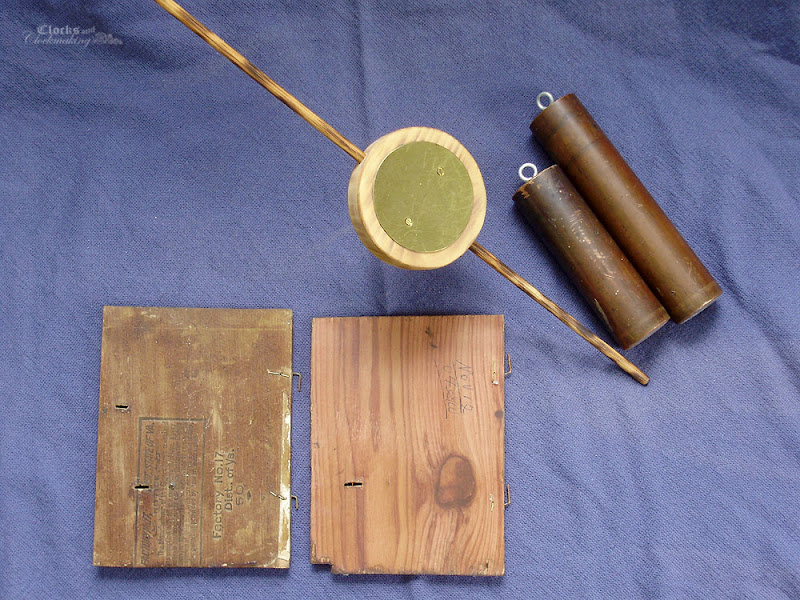 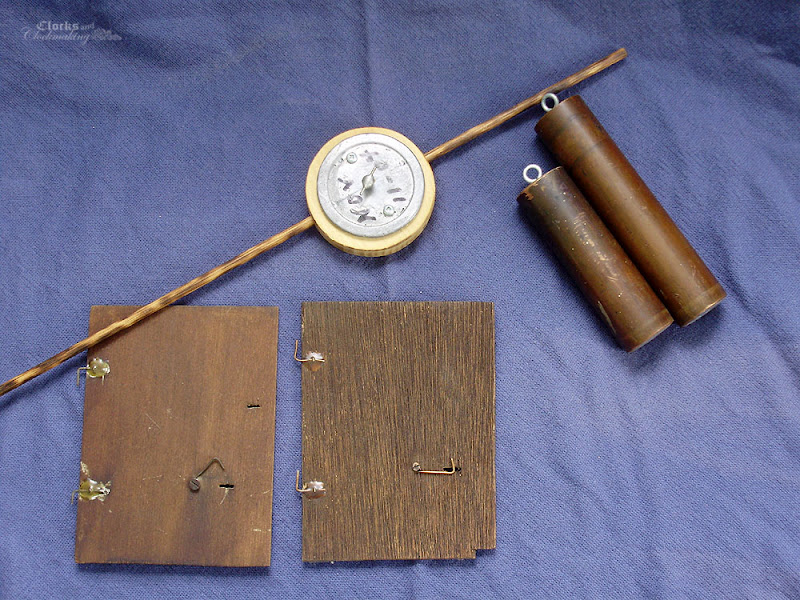 The weights were a bit creative. Large diameter copper pipes filled with lead. They look fine, except that they should be brass or cast iron. 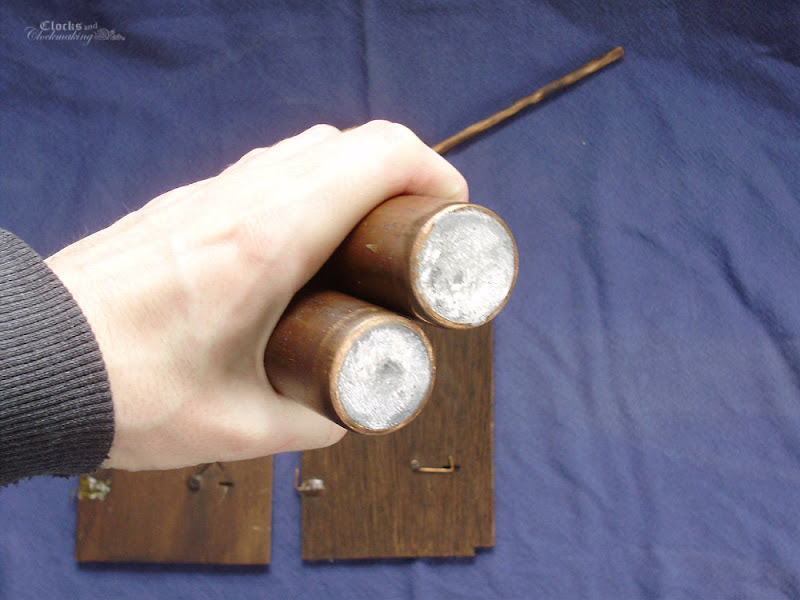 The shield dials on these Black Forest clocks are normally curved. I don't really know why they chose to make them this way, but I have seen plenty of examples, and they are almost always curved. At some point, someone must have thought that this dial had simply become badly cupped, and they "fixed" it by flattening it and gluing large wooden stretchers on the back. This is probably what caused most of the cracks and damage to the dial. There are large cracks and losses to the paint and gesso. This also makes the hands stick out quite far away from the dial.

There is actually such significant paint loss and stress cracks that the area above the 7 shows a piece of German newspaper that had been used as a patch over a knot in the dial before the gesso was applied. I will take detail photos of this later. 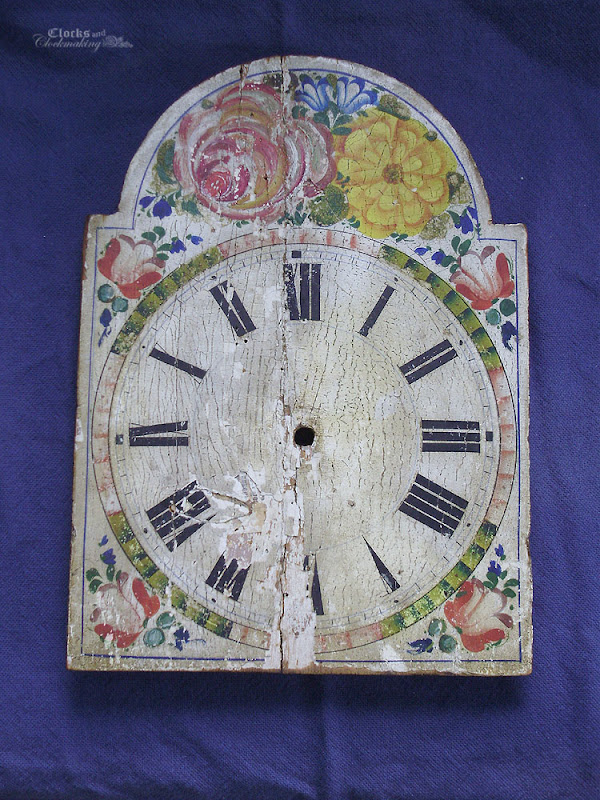 The knot is visible on the reverse. 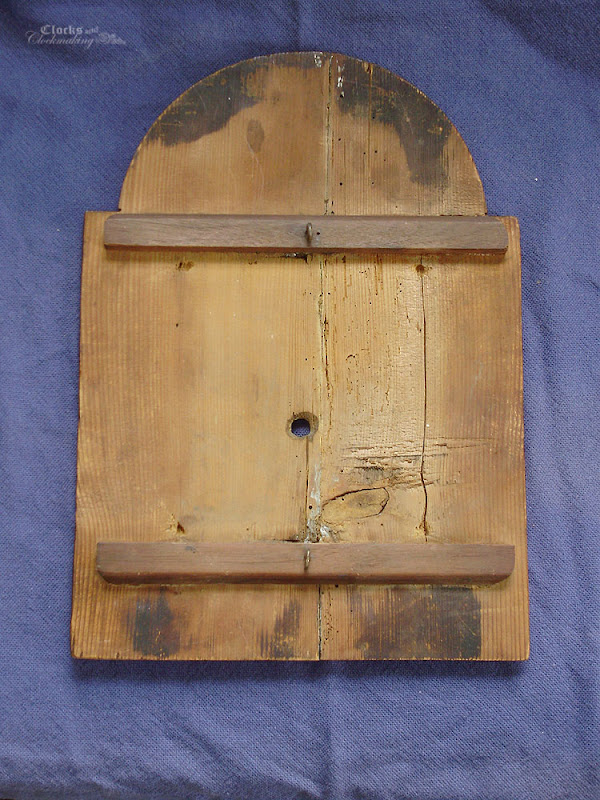 The dial and paint are so fragile that I'm not sure if I want to attempt to remove the stretchers and repair the curved profile. The dial is badly damaged, but it's not so bad that I can't live with is as-is.

The movement appears to be unsigned/anonymous (a name can sometimes be found on the top verge retainer piece, or scribbled somewhere on the movement in ink). A large number of these are unsigned and difficult to date. I would guess this clock to date ROUGHLY around 1860-70. The very old ones with wooden arbours can date as early as 1780 especially if they have glass bells. Some are musical as well with multiple bells. Others incorporate moving figures. 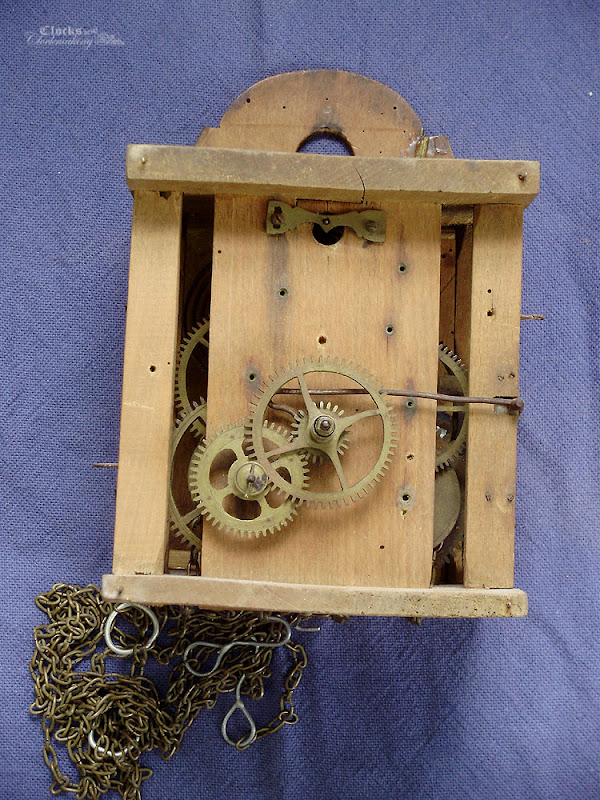 The plan will be to take the entire thing apart, repair all the wood (plug screw holes and repair cracks) and then re-assemble everything with hide glue. New side doors will be made, and proper weights and a pendulum will be ordered. Once the clock is all cleaned and put back together it will get a custom wall shelf so that everything is properly supported. I'm not sure when I'll work on this clock, but stay tuned!

Again, I want to stress that despite all the problems, I'm thrilled with this freebie!
Posted by JC at 12:38 PM