Here is a stunning clock I was lucky enough to find for a decent price on eBay. 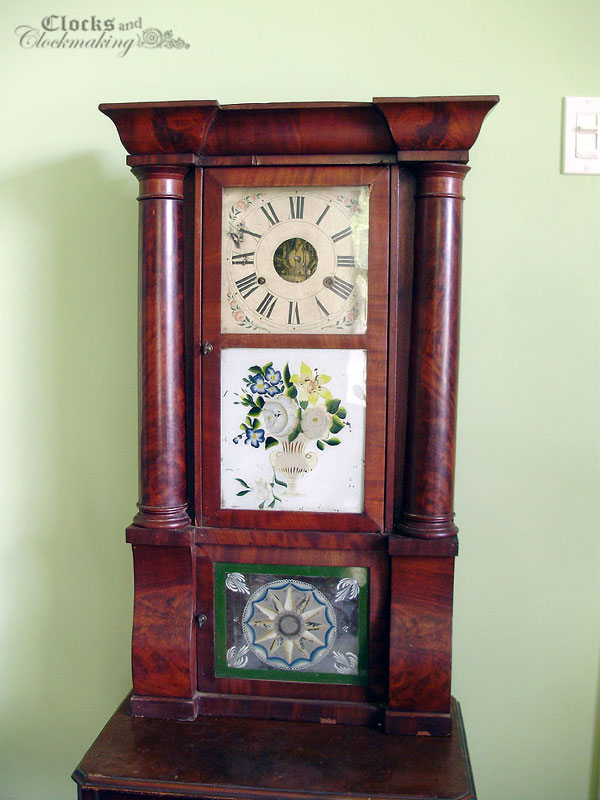 The clock is a John Birge & Co. column and cornice clock. This is a rather large 8 day weight driven clock. I already own a nearly identical Birge & Fuller clock, and I adore it. This clock would have been made in 1848, following Mr. Fuller's death in 1847, and just before John Birge partnered-up with Ambrose Peck (forming Birge & Peck in 1849). It's rare to have an early clock that can be dated to exactly within a one year span.

I purchased this clock mostly because of 2 factors. 1: It had amazing original glass tablets, and 2: It had a low price. Otherwise, the clock has several problems. It has no weights (these are expensive to replace because of the shipping costs), the original hands are missing (and very hard to find), there's no pendulum bob, the movement has several botched repairs, there are lots of veneer repairs and case work that needs to be done (one of the first things you might have noticed are the incredibly crooked columns), and the bottom part of the label is completely gone (however the large company name is still there).

That said, I think that the tablets and beautiful mahogany veneers make this a clock well worth restoring.

One problem that I had when I purchased this clock was the jerk who was selling it parted it out. He sold the hands, dial, case, and movement separately, and it appears that the original weights weren't with it.

What made it even more annoying was that the seller sold the hands first, followed by the dial, then the case, and finally the movement. I didn't know if I would win the case, so I didn't want to pay "insane money" on the hands, and they sold for 26$ USD. The dial was marked as just a "wooden works dial" but having seen a LOT of Birge clocks (having done research on them for my Birge & Fuller restoration) I was 99% sure this dial went with the clock (which it does). I won the dial (20.51$), then won the case (154.50$), and finally the movement (76.00$). If the hands had been sold AFTER the case, I would have bid much more on them to keep them with the clock.

Everything together, including shipping came up to 360$ CAD (321$ USD), which is an excellent price for an early Column & Cornice. I love my Birge & Fuller column clock so much that I've always thought that if I could get another one for under 500$ I'd go for it, so I'm extremely pleased with this purchase.

I was worried that the glasses might break during shipping, but the clock arrived safely.

As a side note, I will say that in over a decade of clock collecting, and hoarding images of original painted tablets, I have never come across this particular design (centre tablet). The bottom tablet is a typical freehand design around a Fenn stencil in silver, but the centre glass is entirely freehand, and just gorgeous.

This clock will be getting the royal treatment, and I've already started working on it. The entire crown is messed-up, and the entire case will be taken apart. Luckily there's only very minor work needed on the doors, so those will be easy fixes. The dial is also largely perfect, except for a dark spot which I will try to clean off.