Alright, I haven't had any news about the longcase clock yet, so I thought I'd post a few photos of some upcoming future projects.

Those of you who have been following my clockmaking projects from the past may remember that I've wanted to build a Laterndluhr* reproduction for several years. I started the project by modifying a cheap mass-produced cable driven "Hermle" style longcase movement from a 3-train triple chime (which was missing parts) into a time only movement.

This movement was cut-down into a rectangular form, had the corner posts moved, and I rebuilt a new pendulum crutch. The movement was also fitted with an eBay-found dial sub-plate and brass bezel, and it will eventually have a nice dial for it (either a better version of the current one, or an etched silver one). The current dial is a paper dial that I edited and cut to fit (with the help of my Dad). The dial is 8" overall, and the hands are modified "Seth Thomas Fashion" hands (which are often found on the Seth Thomas "Fashion" calendar clocks). 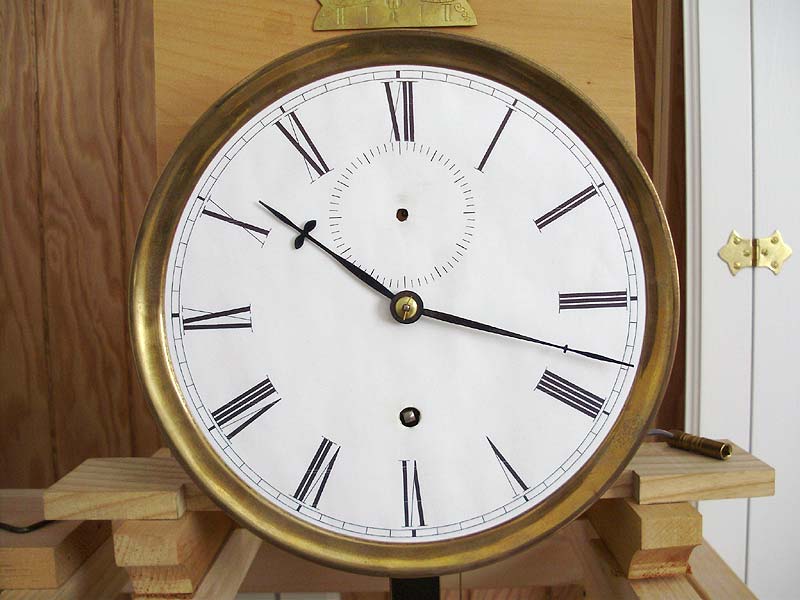 The weight (4lbs - yes, that's correct, without the pulley the 8 day movement runs reliably on only 2Lbs) is an inexpensive reproduction, and I'd like to make a new cap for it with a knurled edge, but I don't have a knurling tool. The pulley is also an inexpensive repro. 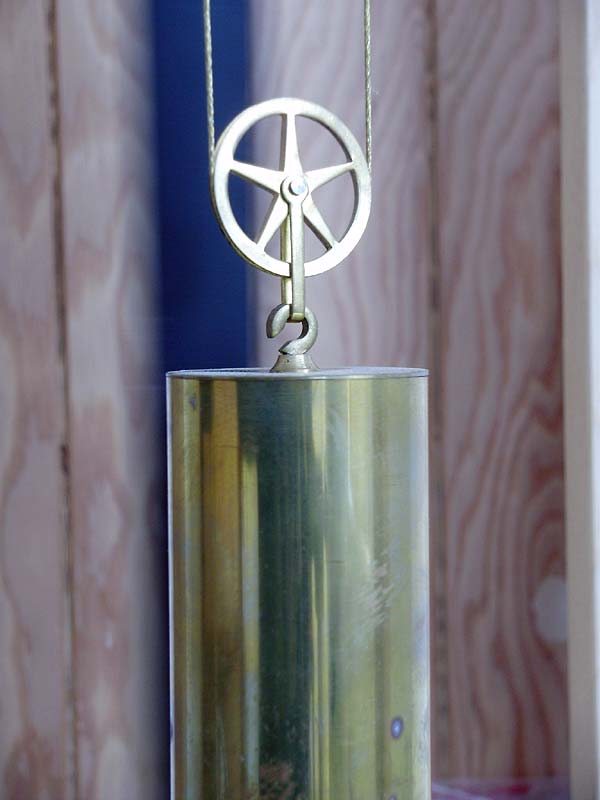 The pendulum is about 45" long (from suspension post to the base of the bob), and I'm using a 6 1/2" old-stock bob (the type that are made with a solid brass spun sheet on the front, rather than the newer ones which are only brass plated). 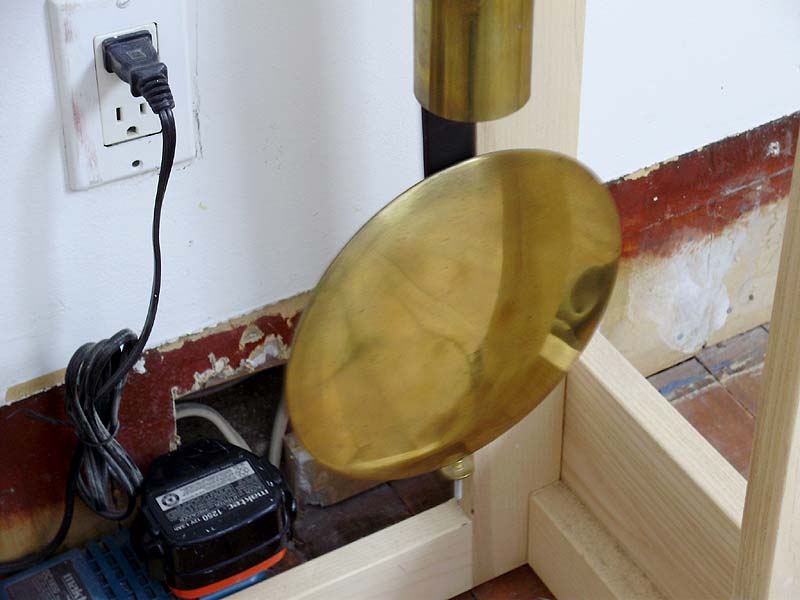 *If you're wondering about the pronunciation of Laterndluhr, as far as I can tell, the correct one is: Lat-turn-dul-er. This is a German word for an early style of Vienna wall clock in a "lantern" type case (with many glass panels around it). It is a combination of the German words for Lantern and Clock.

Another project that is going to be on the list, is my Massachusetts Shelf Clock. A while ago, I custom built (from a kit) a high quality Lenderman banjo clock movement, and I made several modifications to it: making it a rear-mounted pendulum version with a falling strike. I plan to build a mahogany veneered reproduction case for it, but I haven't decided on what design I want to do yet. I have several ideas for it, but I just can't decide. The movement is fully functional, reliable, and beautiful, and I'm eager to get started on a case. 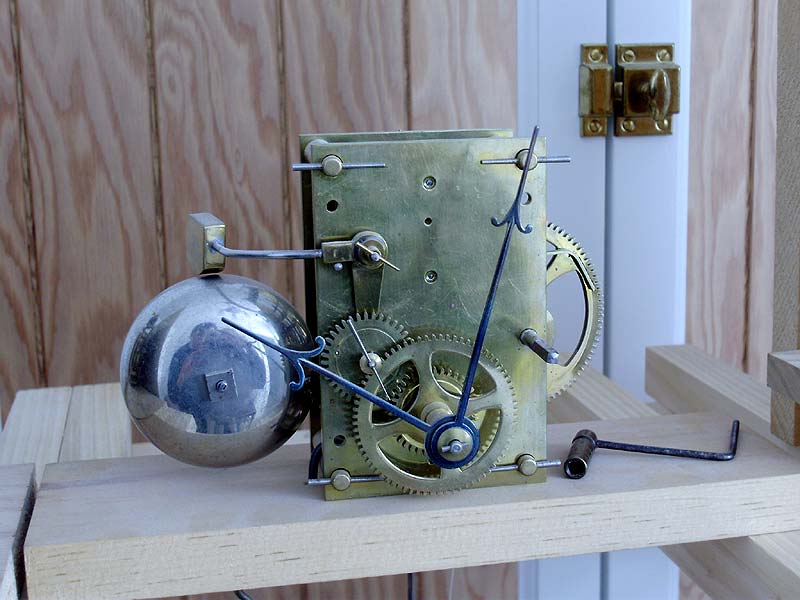 A third project that is nearly ready to case, is this lovely longcase clock movement. It is a good quality orphaned (unsigned) longcase clock movement. It had a few minor pieces missing, such as a rack spring, pendulum crutch, I think the back bridge/pendulum support was also missing. Several teeth needed to be re-repaired, and the centre shaft needed a silver solder repair to replace the broken tip, etc.

The most fun part of this project was building a new dial. I started with only an antique hand-engraved chapter ring, and a sheet of brass. The centre of the dial was matted by hand, the spandrels were inexpensive cast reproductions (which were hand filed to maximize the details, and I may also want to have them gilded), and I custom made the seconds dial, which will be galvanically etched to match the exterior dial numerals.

The hands are temporary paper ones, but I like these (I have a few different styles that fit the style that I want) and they are likely going to be the ones I choose, when I decide to hand-cut and file them from, 1/16" steel. 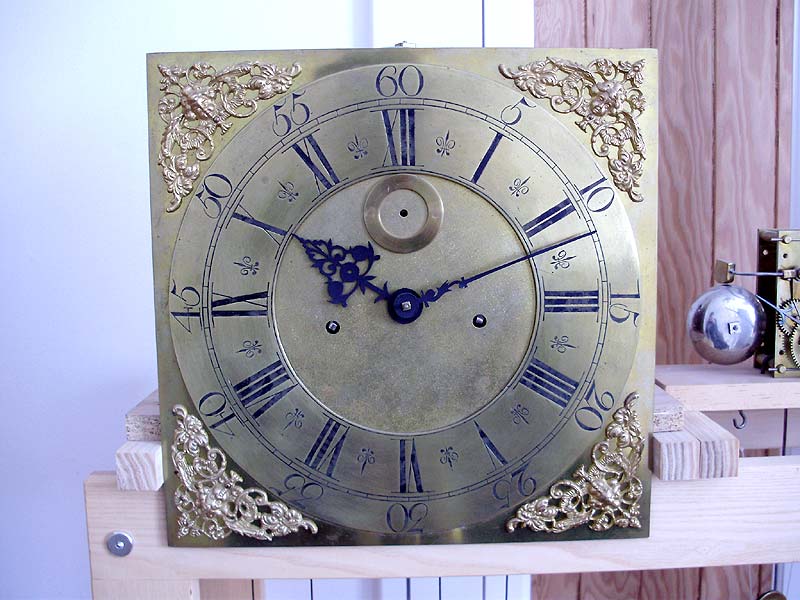 The chapter ring and seconds dial will eventually be silvered, and I also need to fit a pendulum, drill the hole in the centre shaft (for the minute hand retaining pin), etc. I also don't have proper weights for this movement yet.

I also have several other fine movements that I can case, such as another chain driven longcase movement, a few French movements, early American movements, etc.