This is another clock I'm currently working on. This one has also been on the waiting list for a very long time. I got this clock as part of a trade with my first clock collector friend and mentor Larry. I forget where he bought it, but I think he had picked it up very inexpensively due to the mediocre condition of the clock. The best feature of the clock is the painted tablet, but unfortunately the tablet split in two during shipping.

The following photos were taken recently (in nice lighting), but the dial has had some work done to it since I received the clock. Down below are some older photos of the clock.

Sometimes I'm so focused on the project details that I forget to even talk about the clocks I'm fixing. This is a wonderful "bevel case" clock by William S. Johnson of New York. I normally refer to these clocks as "ogee" clocks simply because they are nearly identical to ogee clocks in every way, but because they lack the actual ogee mouldings which give those clocks their name, they tend to be referred-to as "bevel case" clocks instead. I tend to use the terms quite loosely. As far as we can tell from research, it isn't known if W.S.J. actually manufactured clocks himself, or if he simply assembled them and sold them under his name. He was mainly active between the years 1841-1861. This clock is pretty early due to the bevel case. Bevel case clocks first appeared with wooden movements in the early 1840s, and very quickly went out of style in favour of ogee clocks by the mid 1840s. I have a nearly identical W.S.J. clock already in my collection with the same address, but different fonts on the label. Both are within the 1840s due to their wood dials and hand painted tablets. My other clock can be seen here: http://www.angelfire.com/me5/clockman/wsj.html 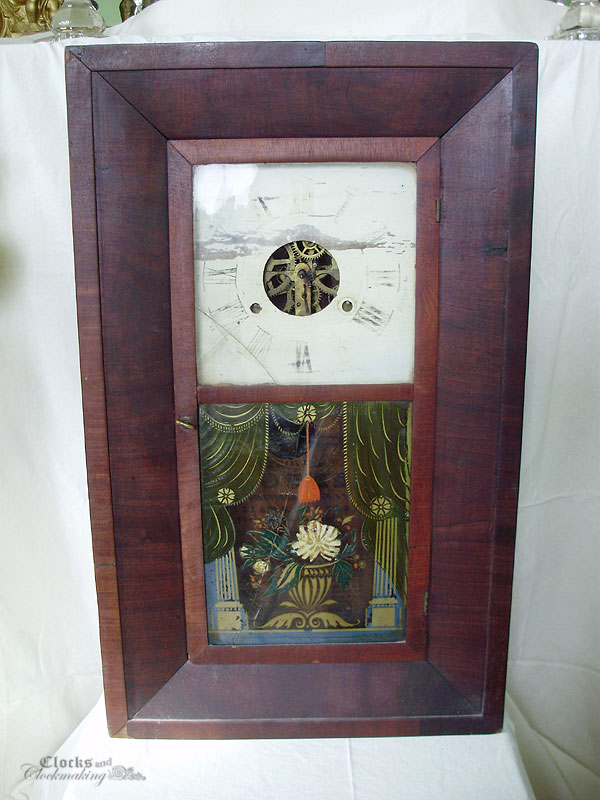 I was very sad to see that the tablet broke during shipping, but at least it's a nice clean break. I plan to buy some expensive specialty adhesive (used by museums) to repair the break. 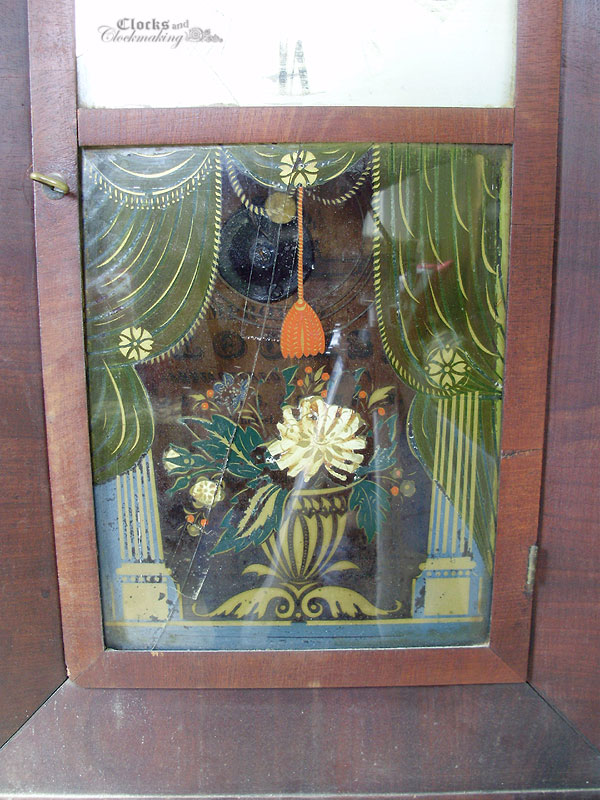 The original label is quite dark, but 90% present. Note the mangled (and broken) gong, as well as the additional holes for the dial. 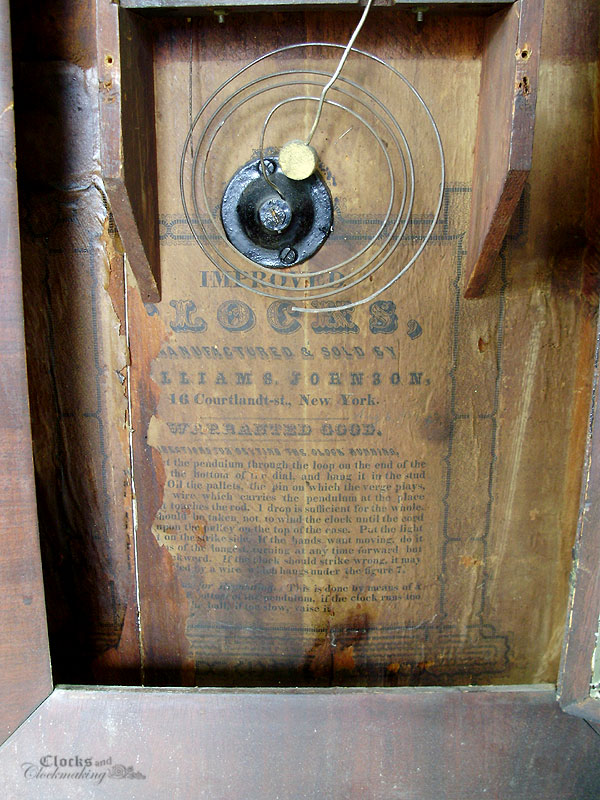 On top of being broken, the tablet was also stuck into the frame along one edge with caulking. Dial glass is also broken. 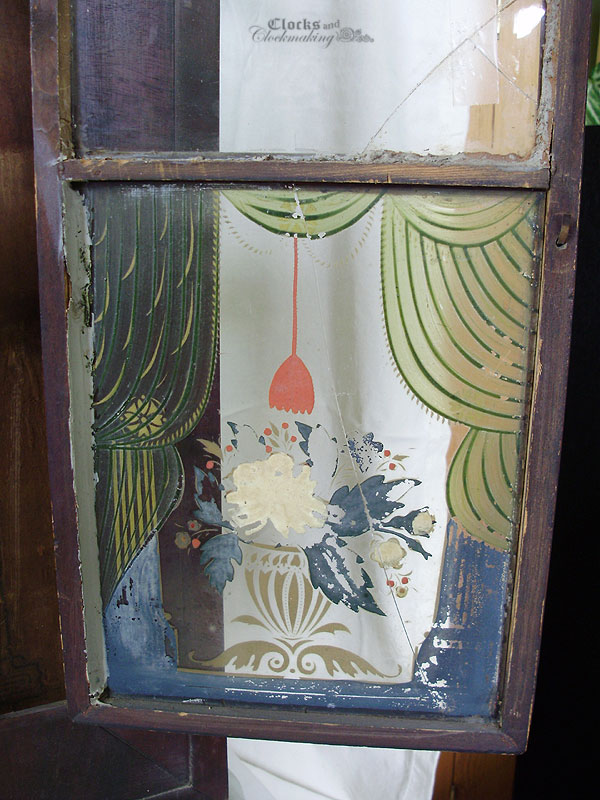 The movement is filthy, but otherwise in not too poor condition. The verge is not missing, but rather the post on which it sits has fallen out. 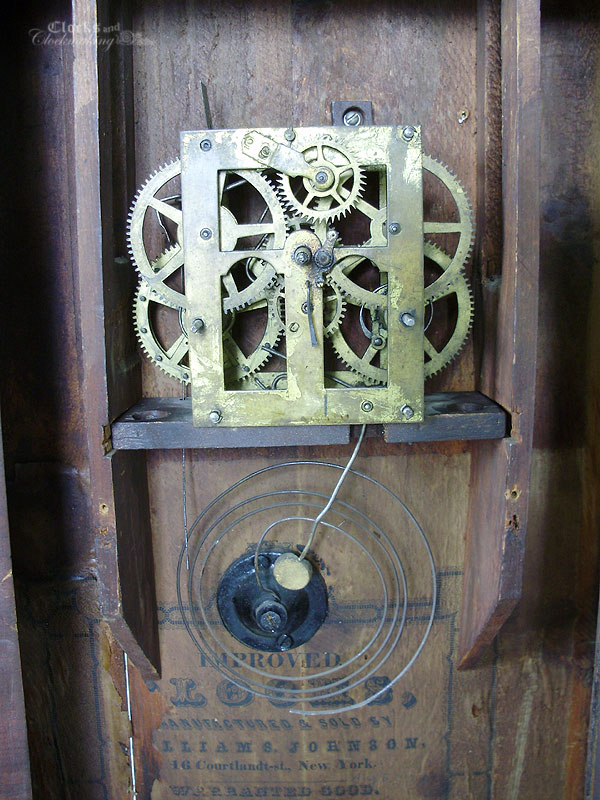 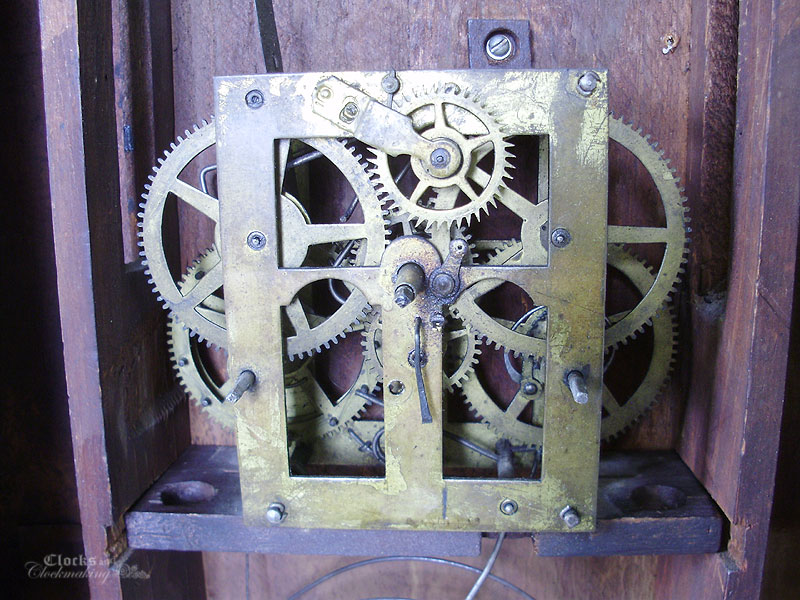 Here was the dial "as received". Someone had decided to go over the numerals (poorly) with some sort of marker. 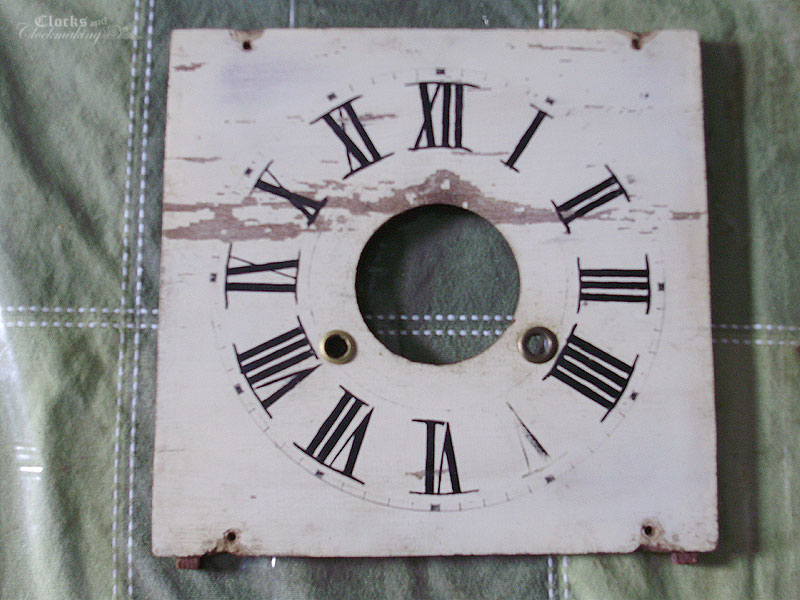 After removing as much of the marker and excess paint (newer paint) this is what was left. Normally the base paint has a bit more gloss, and any newer paints will come off fairly easily (even if a bit of the original paint goes with it). In this case, however, the base white seemed chalky, and as a result a lot of the marker has permanently stained an outline around the numerals. Coupled with the fact that 4 holes had to be patched, and there's a fair amount of flaking, I was left with the decision to repaint the dial. I tried pretty much everything to avoid this, but it's a bit too butchered to salvage. 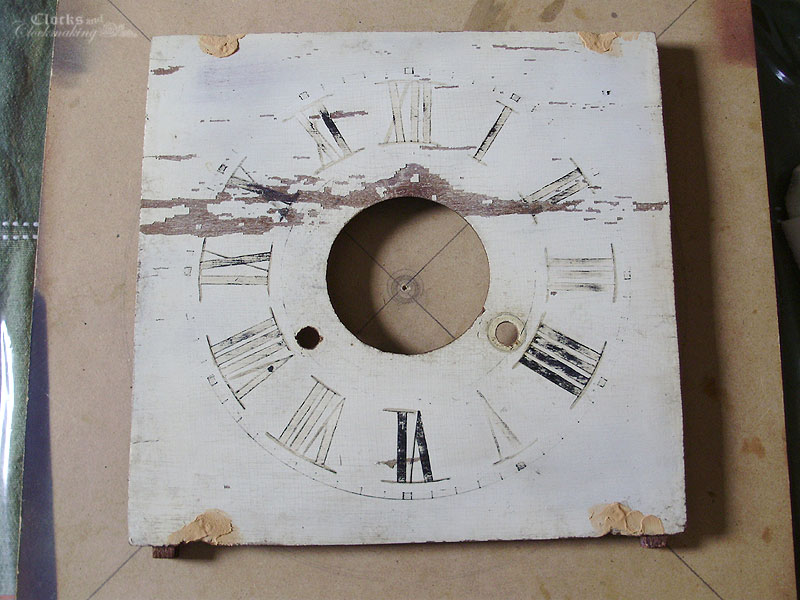 Here are 3 older photos of the clock (after Larry had first bought it): 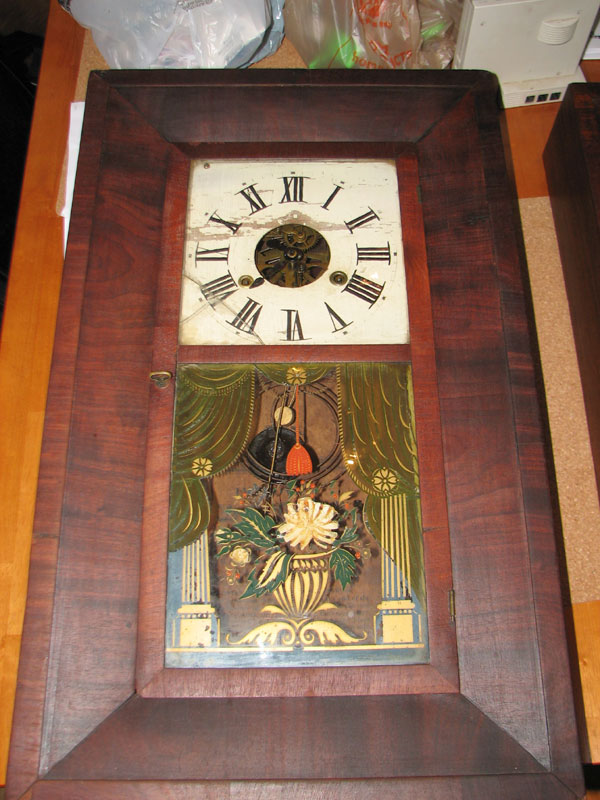 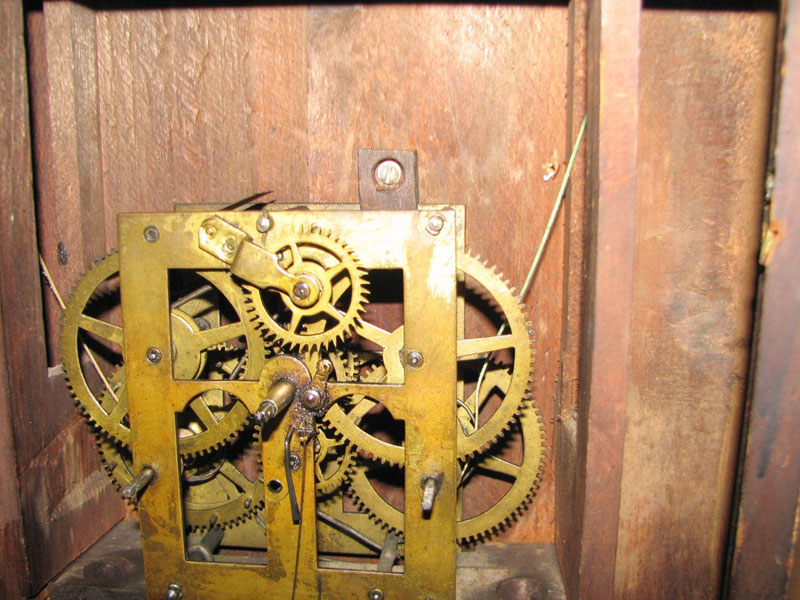 Why yes, that *IS* a coping saw blade being used as a suspension spring. I can't imagine that this worked as it's far too stiff. 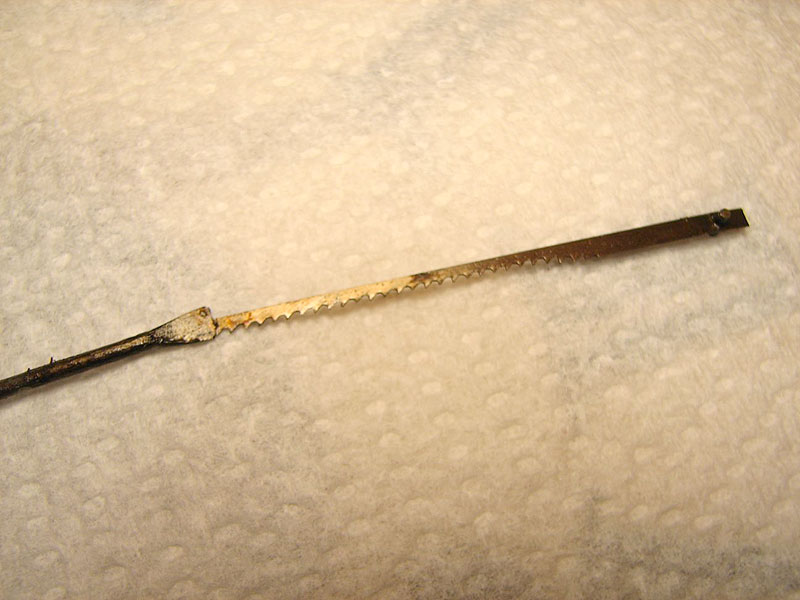 Currently the case is restored (chips and veneer patched, and new hand polished shellac), the dial glass has been replaced (with antique wavy window glass), and the verge pin has been fixed. I still need to redo the dial, work on the movement, and complete the rest of the items listed above.
Posted by JC at 3:31 PM