This past weekend, I went to an auction with 2 friends. I was surprised, though not terribly surprised, to hear that the auction was for the liquidation of the complete inventory of antiques from our only real local antiques store. This is the place I'd visit often for salvaged old glass, keys for old furniture, and the occasional odd part (like the door hinge pins I needed). The owner has been in the antiques business for decades, but I had noticed more recently that the antiques were slowly being relegated to separate outdoor trailers, while the main building was filling with modern reproductions. According to the auction details the business will no longer be selling antiques, and instead offering reproduction pieces.

Since there was so much inventory to sell, the auction is actually taking place over 4 weekends. My two friends had been to the March 5th auction, and they told me that the prices were pretty low. This weekend was part 2 of the sale, and I agreed that the prices were dismal. Some things sold very high (this one lady spent over 200$ on an ordinary looking glass jar, which I hope was some kind of rare collectible) and some things were barely moving at 20$, 40$, or 50$. Certain pieces sold for far too much. One ratty looking "antique" sofa table sold for around 250$. It looked as though it had been assembled from old barn wood, or otherwise severely modified. It had a drawer front on the front apron, but it was screwed in place from behind, and there was no drawer, though there was originally a drawer opening in the apron. Another similarly fake looking corner table sold for around 275$. I had thought it might sell for around 50-60$.

Here are some photos I took while we were there. These are mainly the items that caught my eye.

This ogee clock had been part of his inventory for years. I remembered seeing it over 10 years ago. It's a Jerome or New Haven. The veneer on it is nice Rosewood, but the case has been stripped bare, there were chips, I wasn't a fan of the plain dial, or the tablet, and it had mismatched hands, no pendulum bob, etc. It sold for only 20$. Back when it was in the store, I believe it was priced at around 225$. 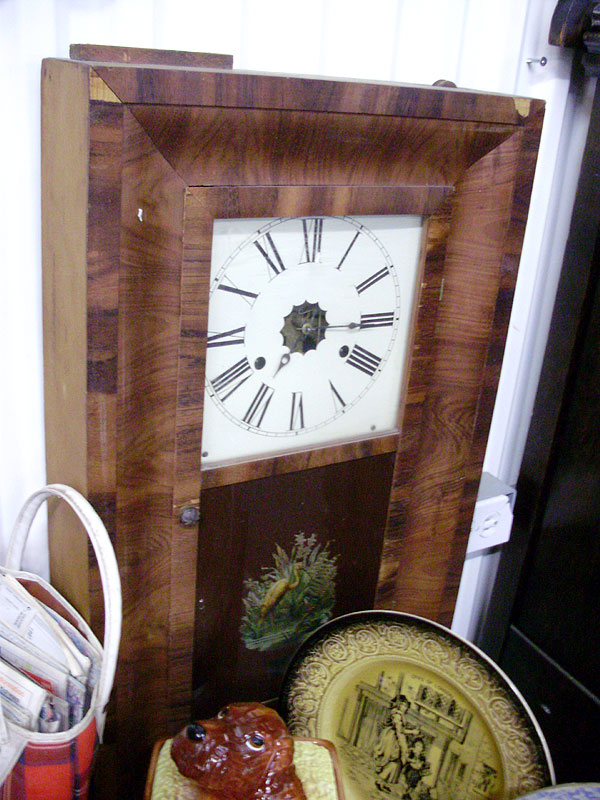 This was a perfectly decent German Box Regulator clock, with only the appliqué missing from the top crest. Nice beveled glass in the door, original pendulum. Sold for 20-30$. It's very similar to my Gustav Becker, but I don't know what company made this one. 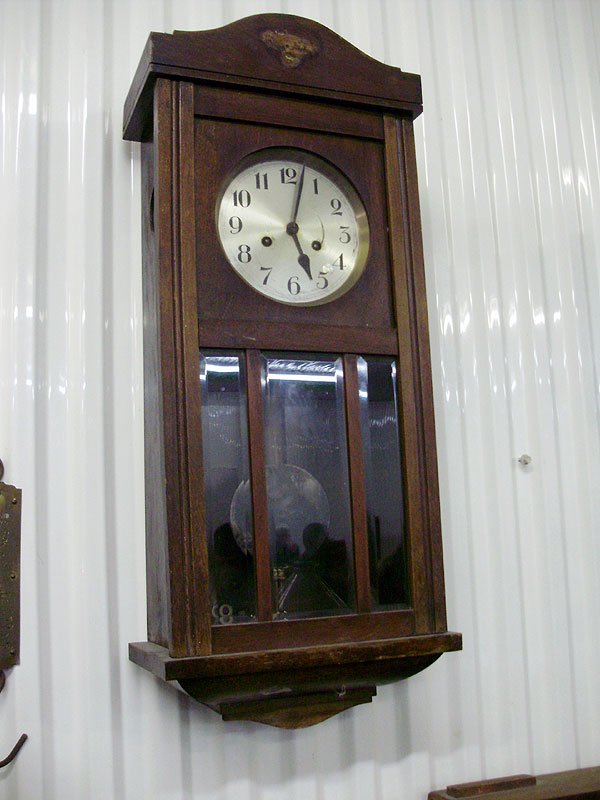 This next one was a pretty nice Eastlake gingerbread clock. I liked that it had pink painted accents as part of the glass decoration. They did not have this kind of glass for very long. Nice original finish. The only flaw with it was the badly flaking original dial. I did bid on it, but it sold for 90$ to another bidder. I think my maximum on it would have been around 60$. 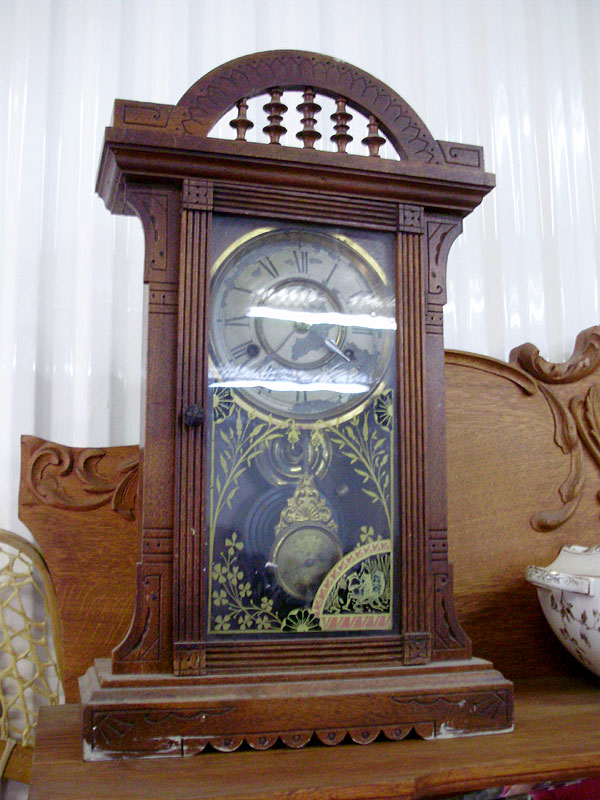 This was a very shabby looking gingerbread clock (possibly Ingraham). Sold for 20$ and I had no interest in bidding on it. It had a newer paper dial, and I'm not sure if the unusual ringed dial centre was original or not. It isn't something I've seen on other gingerbread clocks. 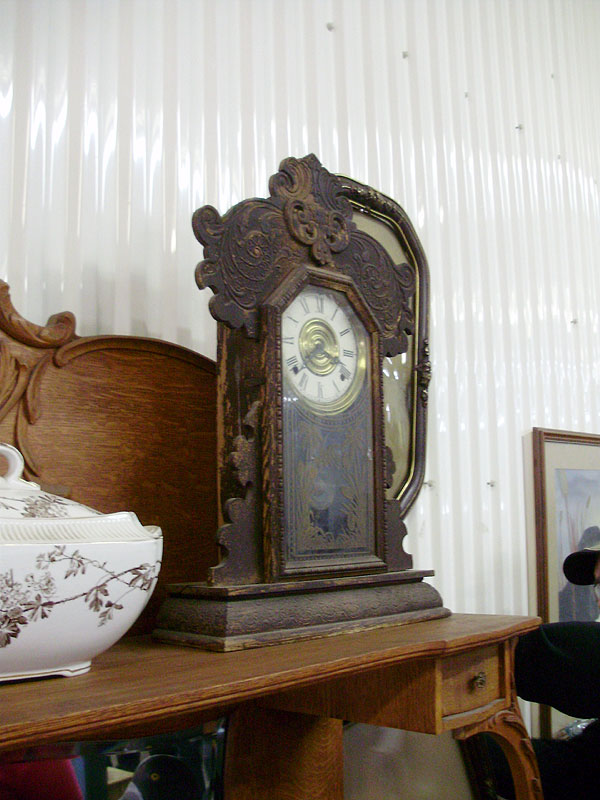 Out of all the antique clocks in the sale, the only one I wanted was this one (which I did buy). It's an all-original E.N.Welch with separate alarm. There are more photos farther down. I paid 45$ for it. 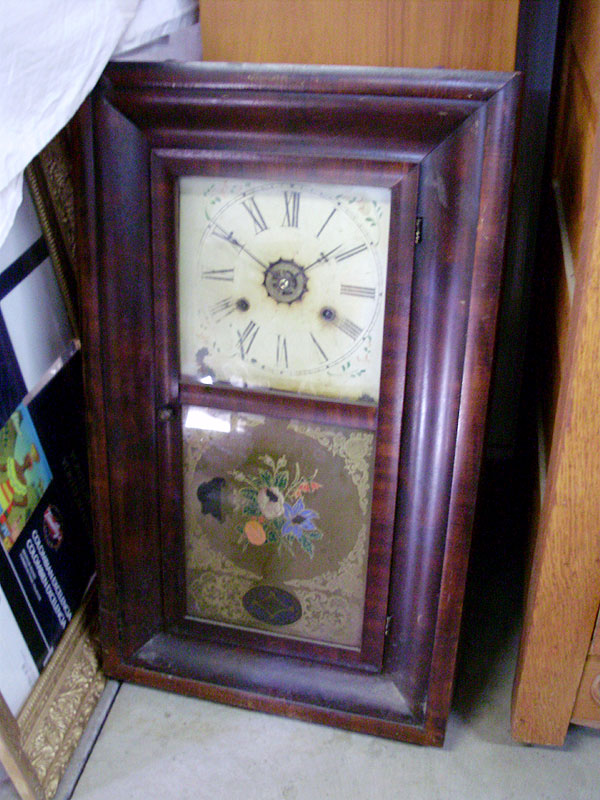 I really REALLY liked this framed print of birds, but it sold for more than I wanted to pay (30$ I think). 20$ was my max. And yes those are dead bug corpses within the frame. 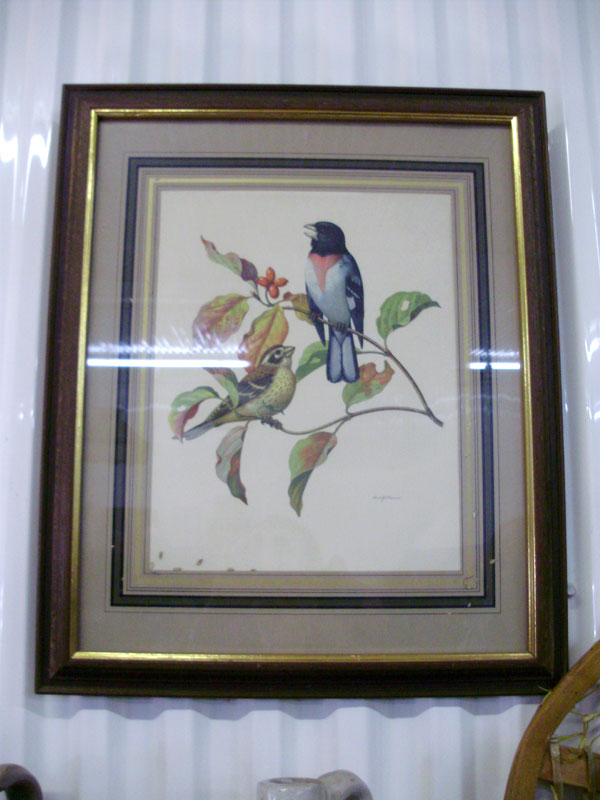 Another boring gingerbread clock. Years ago I might have jumped all over these clocks, but gingerbreads are not high on my list. This one was stripped bare, and I didn't like the overall shape of it with the side columns. Otherwise the condition on it was fairly good. It sold for 30$. I'm sure these were priced at around 250-295$ while they were on display in the store. As the owner, I'd be crying at some of these prices. 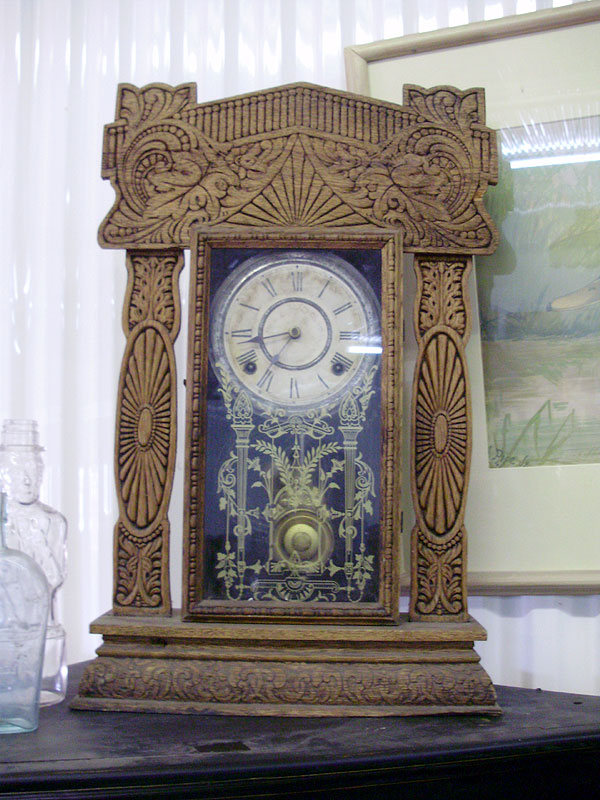 This Vienna clock was a complete disaster. It might not look too bad at first glance, but it had a lot of problems. It did run, however, because someone bumped the case and it ran and struck the hours afterwards for several hours. The dial had the Junghans logo (a J within a star). The main problems with it was that the top was a replacement where the colour didn't even match. The 2 finials on the bottom are actually top finials (because of their shape), and there was also a problem with the pendulum. It swung FAR too low in the case, and the top was either botched or not attached properly. You can sort of see from the photo where the wooden pendulum stick ends below the dial, and there's a brass nut or a washer there. Above this was a metal stem. I only looked at the clock for a few seconds and immediately moved on. I believe it sold for around 200$, but I can't remember. It might have actually been only 130$. Too much in any case. 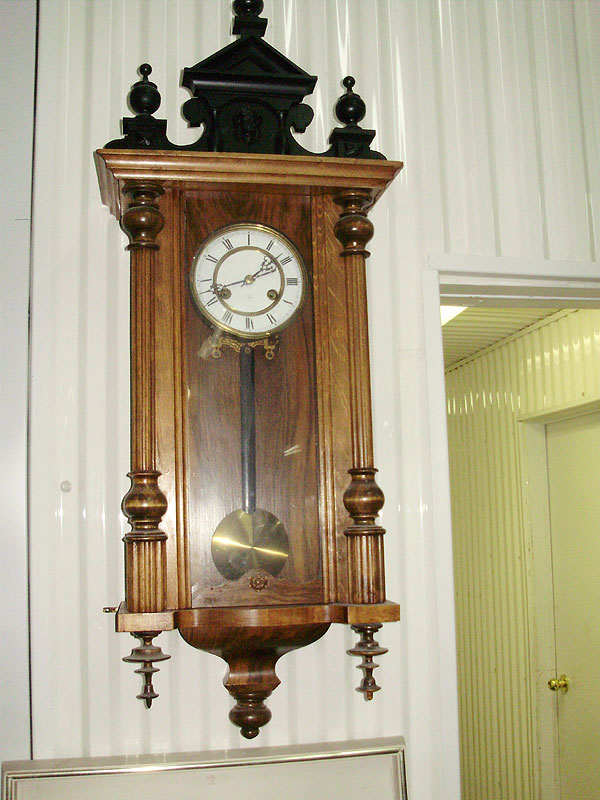 This was an interesting old botanical print. I don't know how old it was, but it was in a fairly old mahogany veneered picture frame (veneered with short grain like on clock doors from the 1800s). I wanted to bid on it, but it vanished at some point in a lot, or I missed it. It's too bad, because the grey matte also matches my paint colours really well.

I liked this mirror. Probably from around 1900-1910. No interest in buying it, but a neat design. 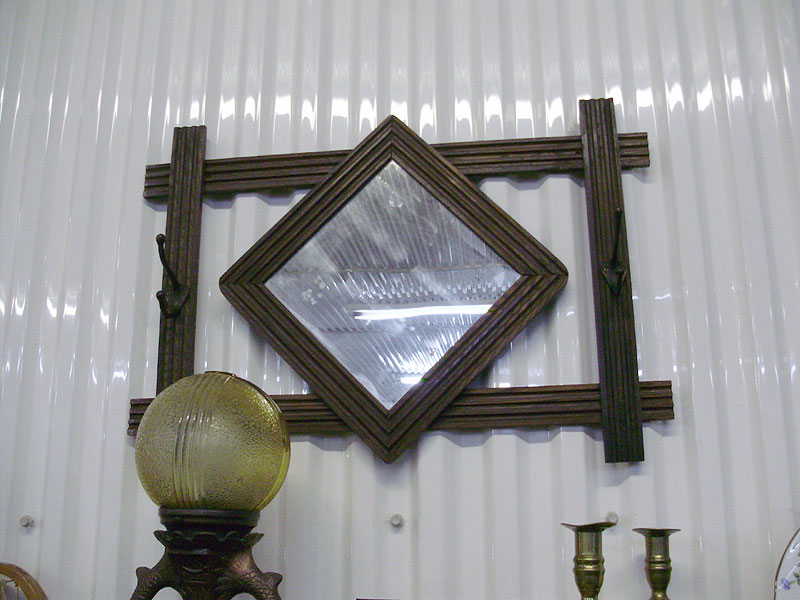 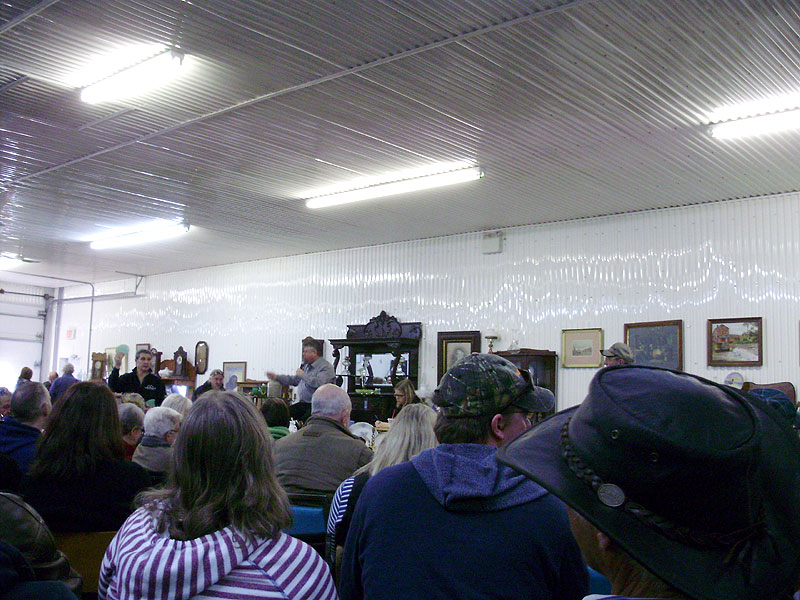 I really loved this Victorian piece. The carving and quality on it were amazing. It had one of those huge 1/4" thick beveled glass mirrors that weighs a ton. It's hard to gauge the size from this photo, but the mirror was close to 4 feet square. I think this one sold for just over 600$. 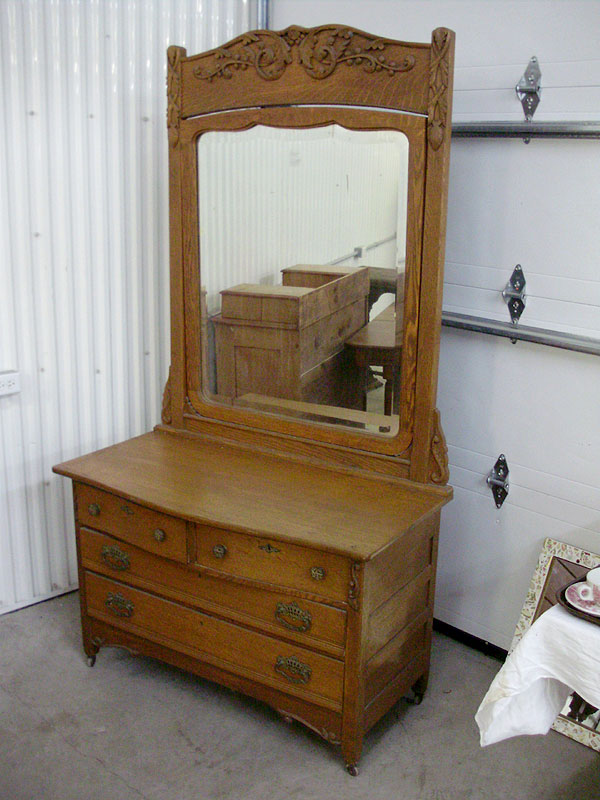 As mentioned above, I bought that lovely old E.N.Welch ogee clock. I hardly need any more ogee clocks (I own about a dozen of them) but this one had everything I look for in a good clock:

It's not 100%, however, since there are some small parts missing: no pendulum bob, no key, no pulley dust covers, and there are a few small veneer chips. I'd say it's 98%. Pretty good considering that a lot of the clocks I buy tend to fall into the 40-60% category before restoration.

All in all, an excellent buy for 45$! I can't even buy and ship a pair of weights for that price! 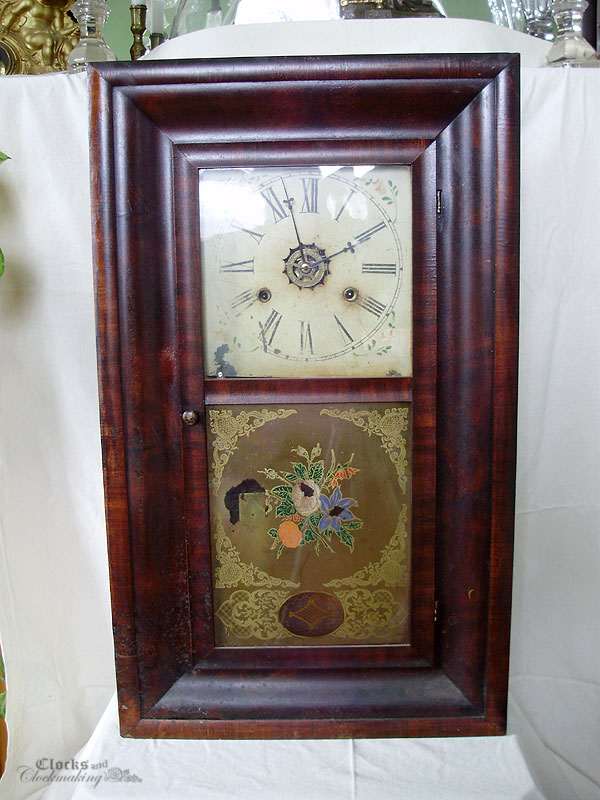 The sides are incredibly pale compared to the front. I actually think that they are maple or birch veneer. Definitely not mahogany. It also looks like the case might have sat in a wet area where it got repeatedly splashed on both sides. This isn't something I plan to fix. To repair this, I'd need to sand right down to bare wood, treat the wood with oxalic acid, and refinish the sides. I don't want to lose the original finish (which is otherwise in great shape). 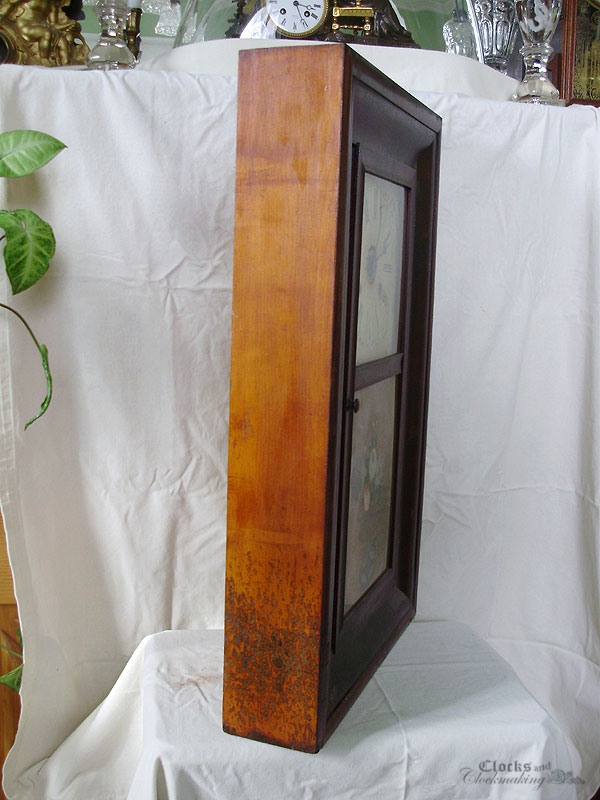 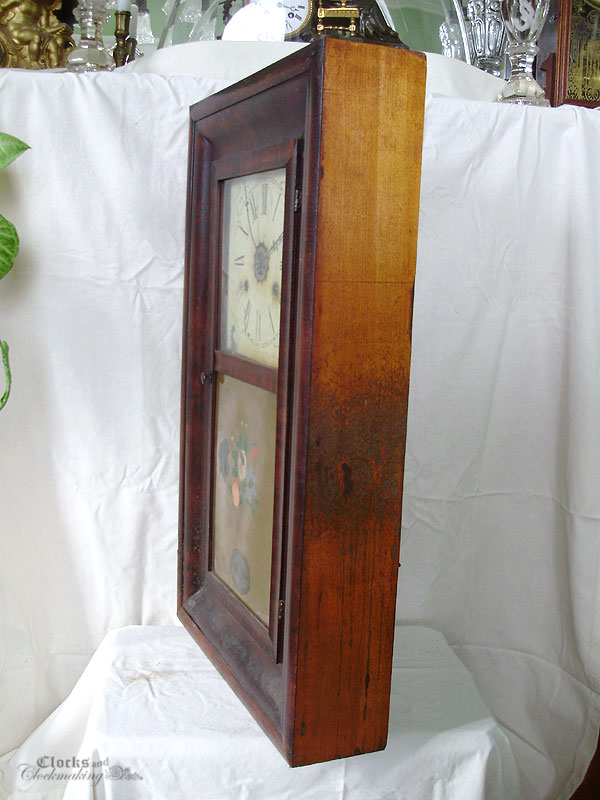 The dial is very yellowed (cigarette?) and I will attempt a gentle cleaning, but nothing else. 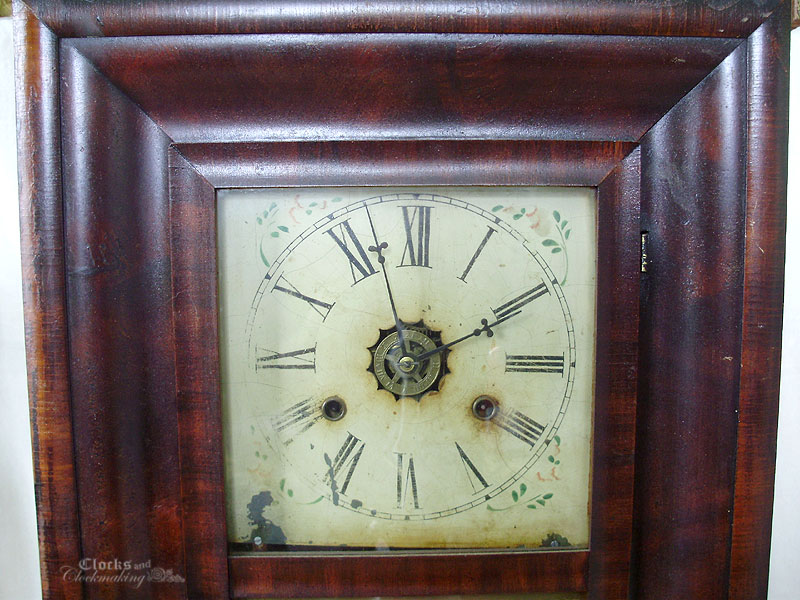 I am debating whether or not I should in-paint this large circular patch. It's entirely within a solid coloured section, which makes for an easier repair. It's fine as-is, so I'll need to decide that later. The flaky flowers won't be touched. 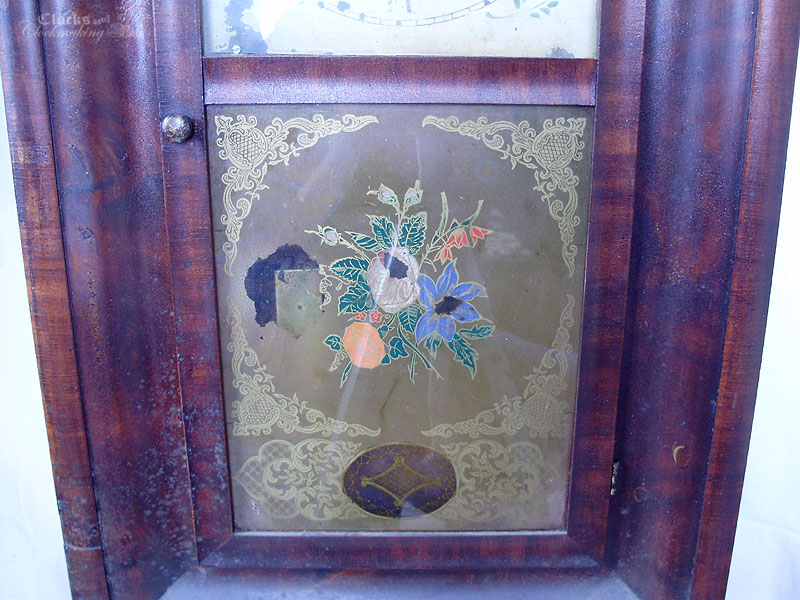 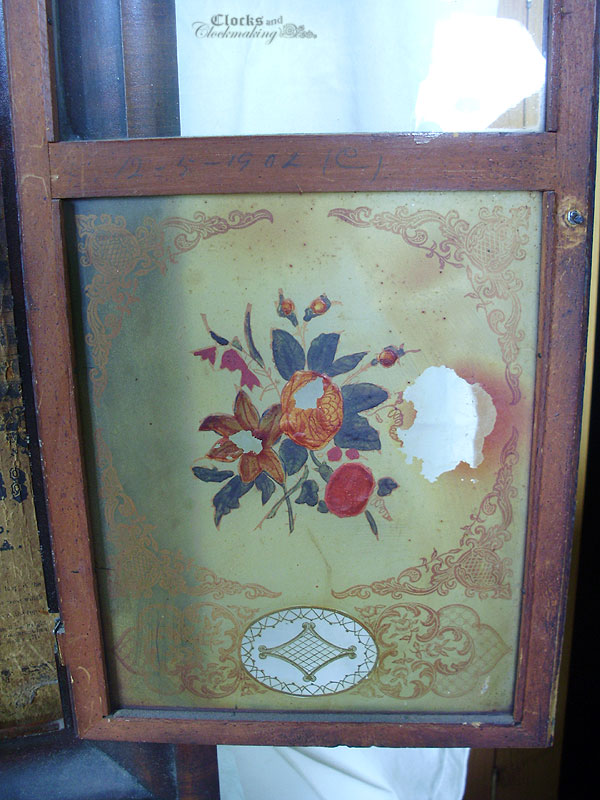 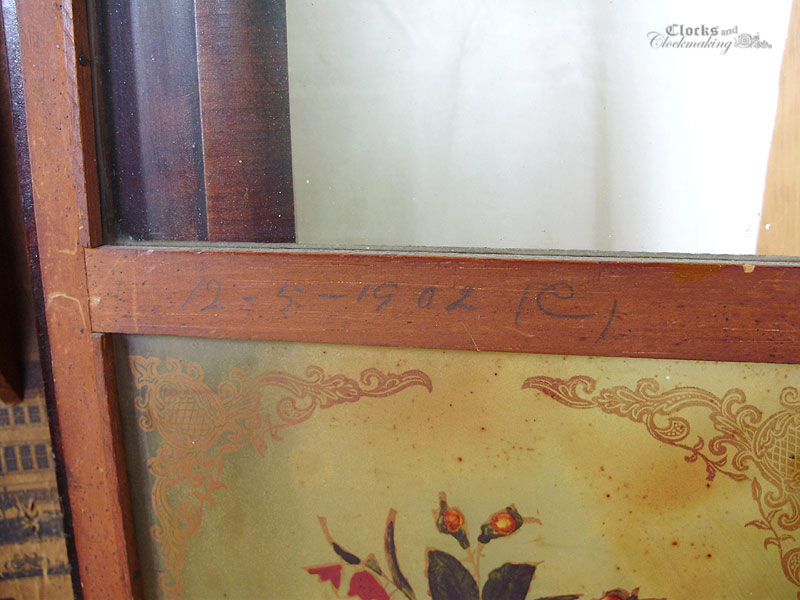 The label is near mint. It shows the E.N. Welch / Forestville factory. I'm not exactly sure when this clock dates. I would guess around 1870 by the general style, but I can't remember when the company changed names. Was it Forestville then E.N. Welch, or E.N. Welch then Forestville. I'll have to check my files and books.

I like that the alarm uses what looks like a standard escape wheel (with crossings) as opposed to the simpler looking toothed wheels that I am used to seeing.

Also note the original pendulum "keeper" wire bent under the bell. These kept tension on the pendulum wire during shipping/transportation. 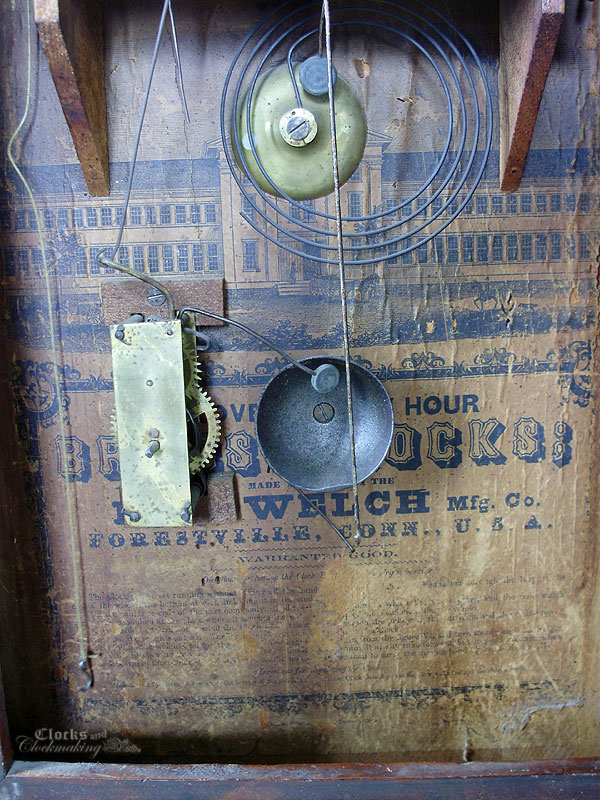 The dial flowers are a bit unusual. The overall shape and leaves are completely standard, but the shapes of the actual flowers are like tube shaped tulips with a ruffled top edge. 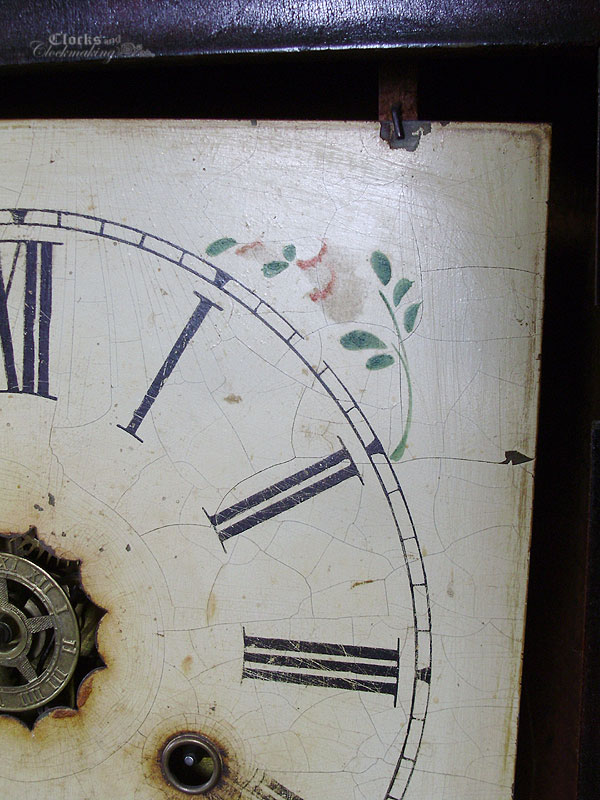 The cream two-tone effect shows much less on the other 3 corners, so the flowers look like just red squiggles. 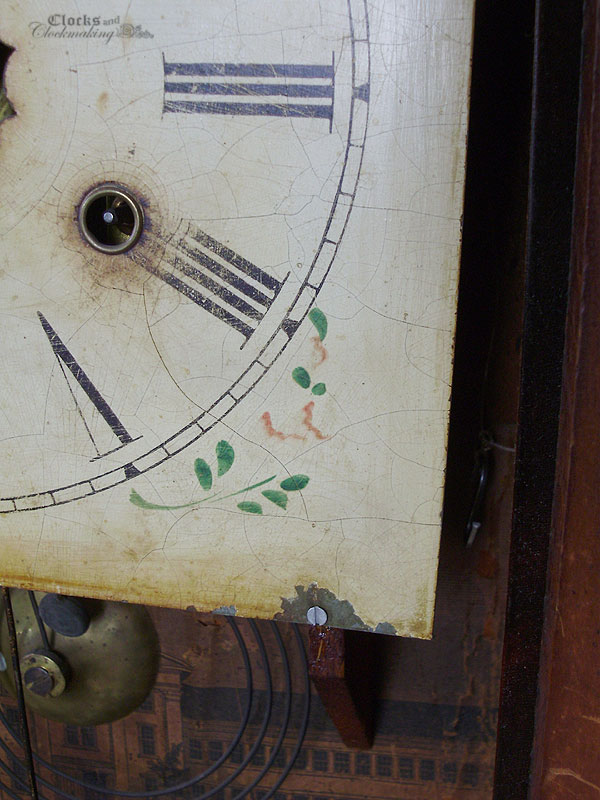 I had not seen the movement until I got home, but it looks fine other than needing cleaning and new weight lines. 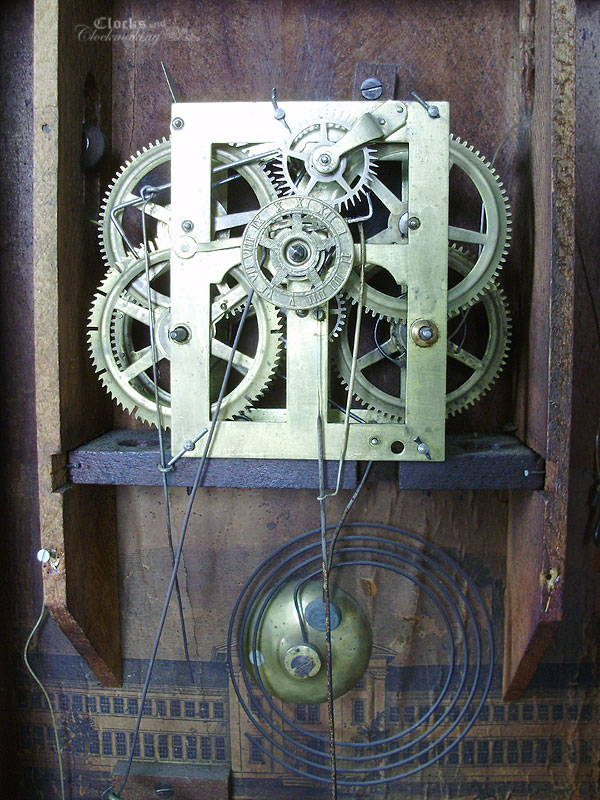 No horrible botches or globs of solder! 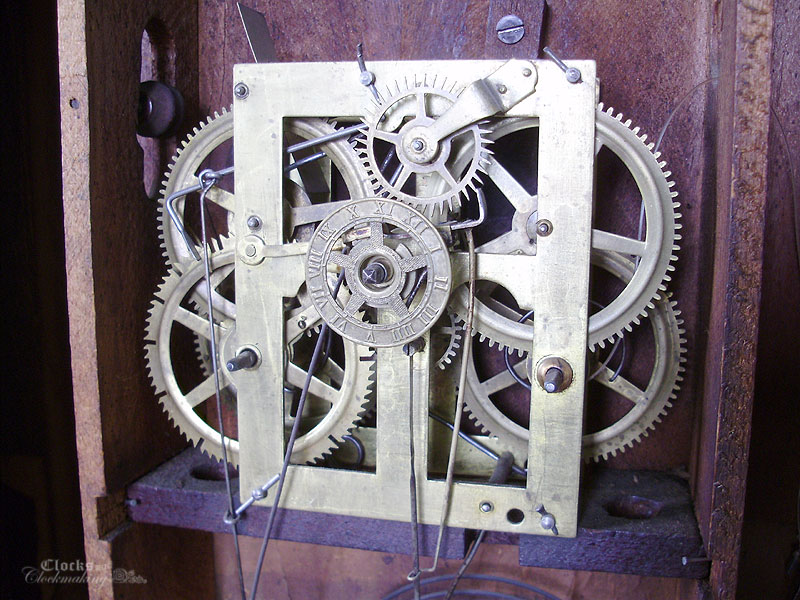 Not really mentioned earlier, this is the second clock I bought. I kind of liked the overall shape, but ultimately I bought it for resale, and because it was the low low price of 20$. The cabinet is walnut veneer, with chrome accents -see front feet (I've cleaned these). There are a few bits of flaky varnish on the top of the clock. 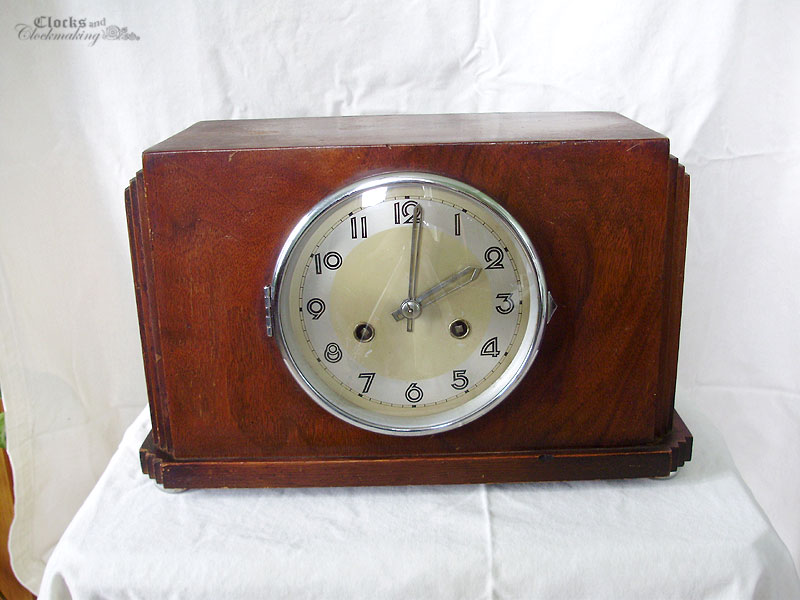 It has a very deep and mellow gong. The clock is by the "Black Forest Clock Co." of Canada. The company primarily sold imported clocks, sometimes in Canadian-made cases. This movement is unmarked, but the pendulum is identical to those used by Mauthe (German company). 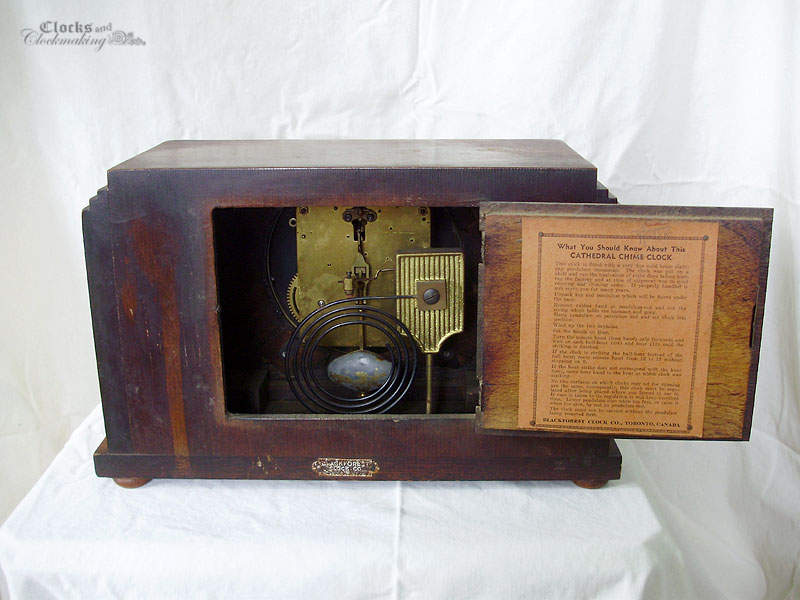 1946 service date. I assume that this is very close to the date the clock was made. The company changed names in 1941, so it must date to just before this. After 1941 the company changed to the "Forestville Clock Co" (not to be confused with E.N. Welch/Forestville, which by this time had switched names to Sessions). 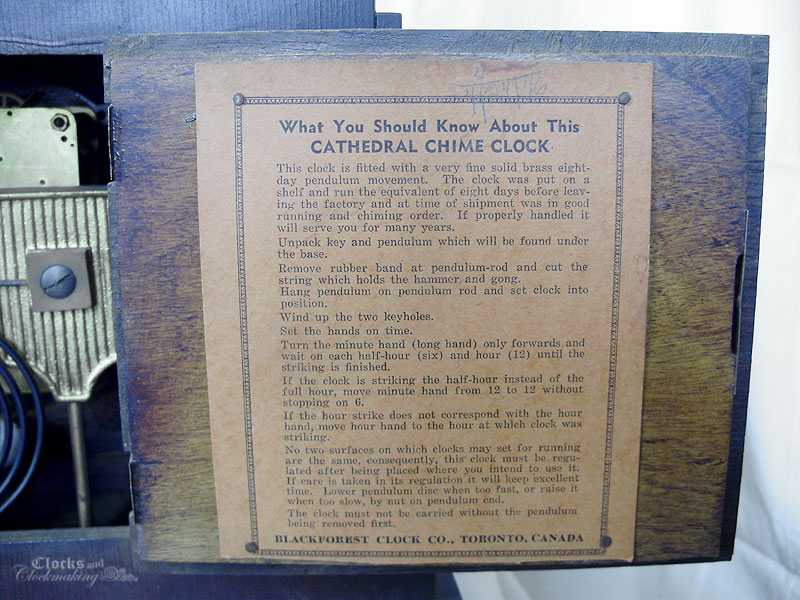 All the labels and tags are in great shape. 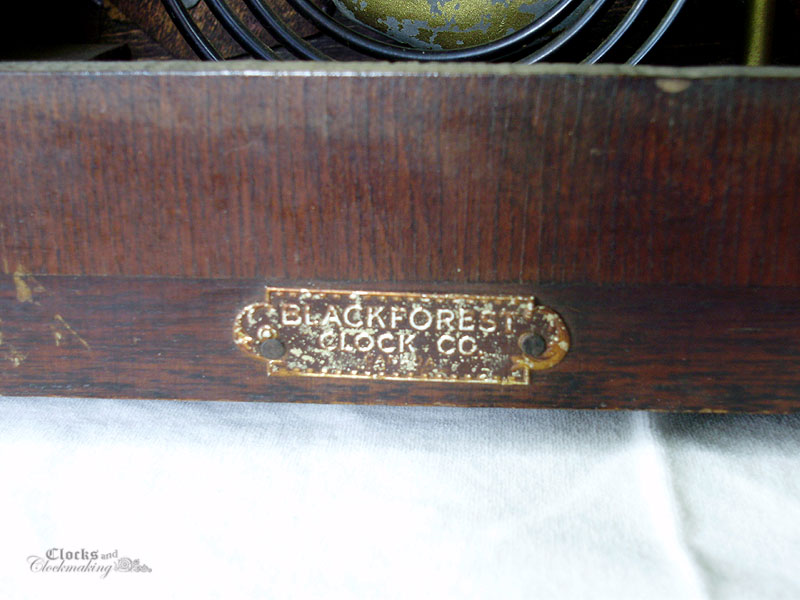 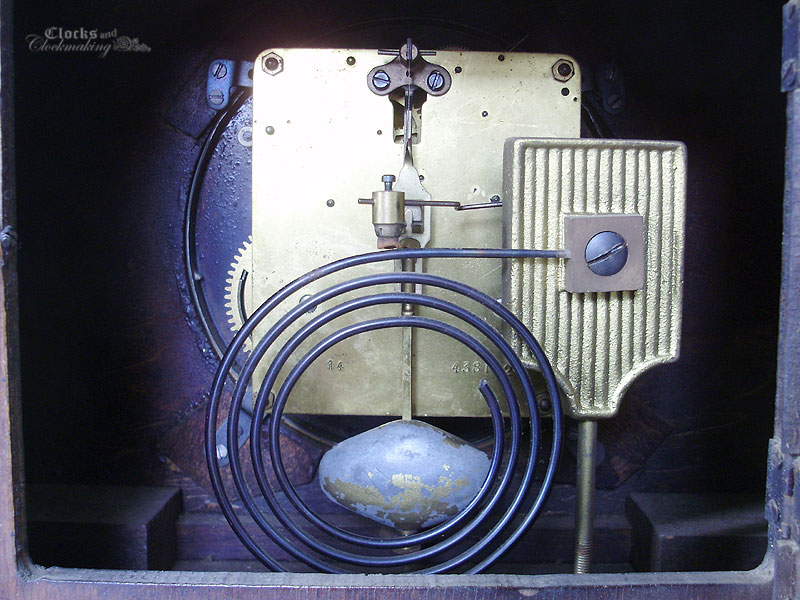 The clock runs for a few minutes, and strikes fine. It definitely needs cleaning.
Posted by JC at 2:28 PM