This is a follow-up post which serves to present additional research done over the past year or so on the orphaned "mystery" wooden works clock case I purchased a while back. The clock in question, as well as some initial research can be seen in this post:

I plan to restore this old clock case, but without a matching example to copy, it becomes difficult guesswork. The following 10 clocks bear some similarities to the orphaned case, and are worth discussing for various reasons.

This first clock is a beautiful piece by Chauncey Jerome & Co., marked Richmond VA. The overall style is much fancier than my mystery case, but the door has 3 divisions (which is generally rare/unusual). The door lock is not a match. 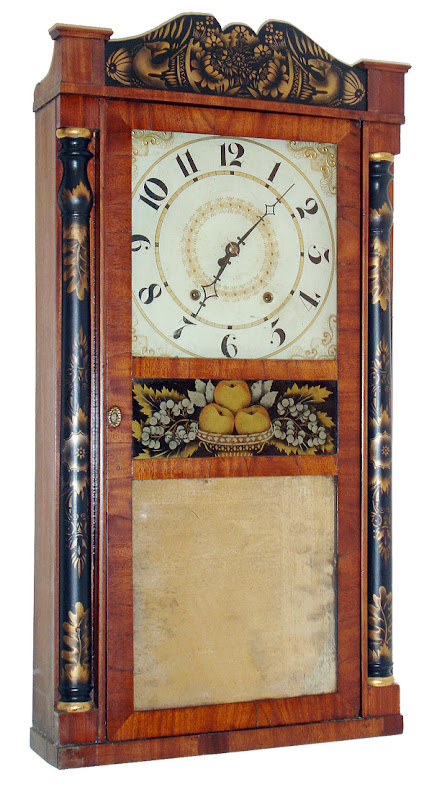 This second clock is a very interesting and unusual clock by Case, Gilbert & Co., Winchester CT. It has a very seldom used top splat pattern, which may or may not be original to this clock, and it features a plain flat front (no columns). The similarities seem to end there, however. This clock is much taller than mine, it doesn't have a 3 piece door, and there are additional lips and square mouldings to the case. As with the previous clock, the use of a door lock is inconsistent. 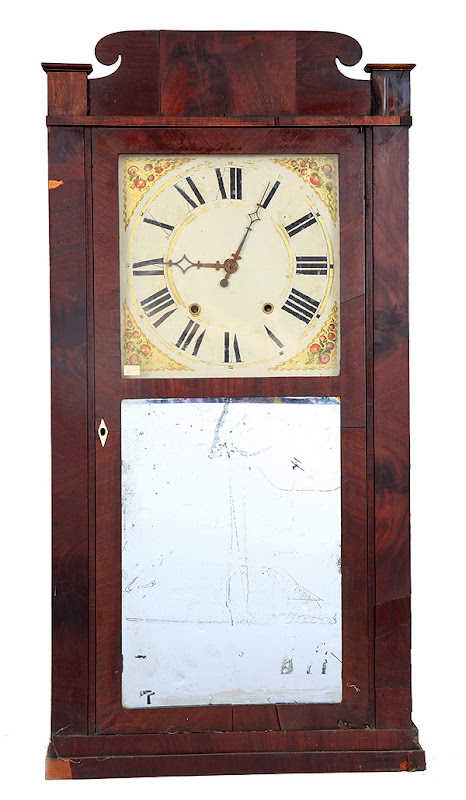 Here is another oddball. This one by Charles Stratton, and features flat fronts with bird's eye maple veneer. The size seems about right, but the interior dividers (which hold the movement in place) don't span the full height. The top is also missing, which doesn't help much with my clock. It's unclear if the door is held shut by a latch or a lock. 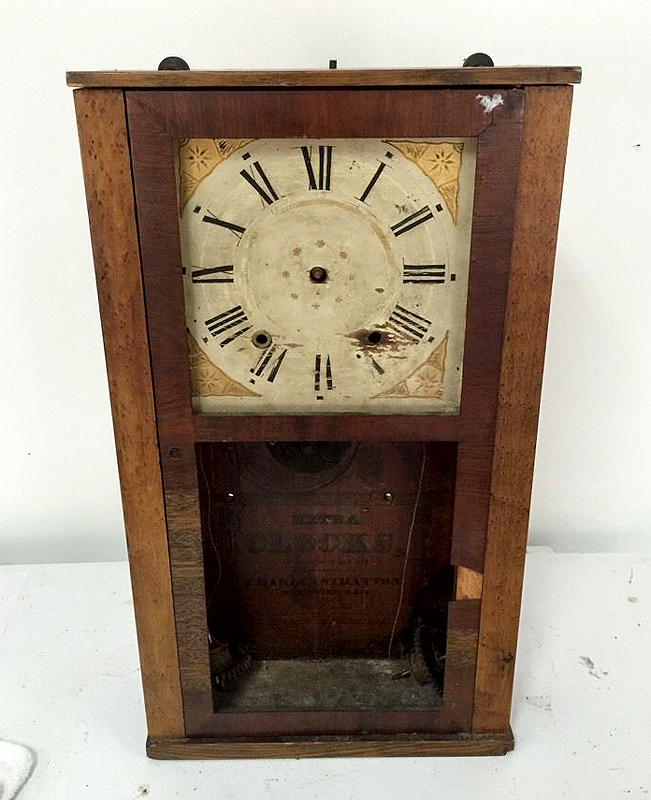 Rob M just posted this unusual Eli Terry Jr. & Co. clock the other day, and it caught my eye. It has a very different top, and no 3pc divided door, but it does have a plain flat front, and it uses a similar door catch. 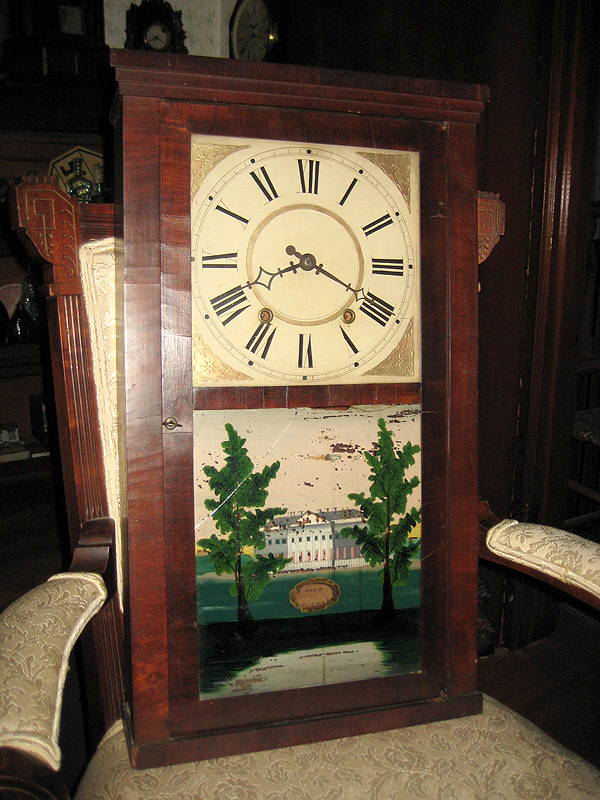 This one is absolutely beautiful, but the only similarity is the 3pc door. Marshall & Adams, Seneca Falls, NY. 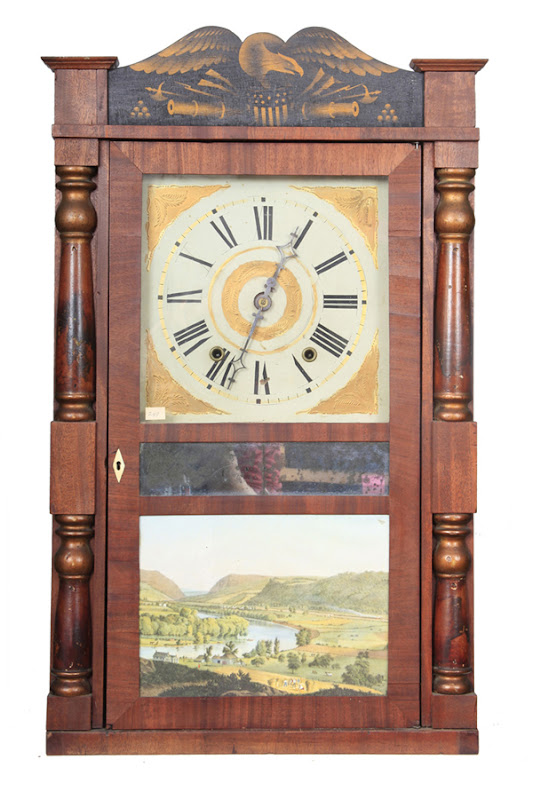 Here is another oddball, and again, only very vaguely related to the mystery clock. This is a rather rare Daniel Pratt clock. It has his often-used triangular columns, but a 2 door design with mahogany in the centre. The overall effect from a distance is similar, but the overall construction and details are very different. Sadly the top is an incorrect restoration, but it's still an interesting piece. I believe this is an 8 day clock, but I'm not 100% sure. 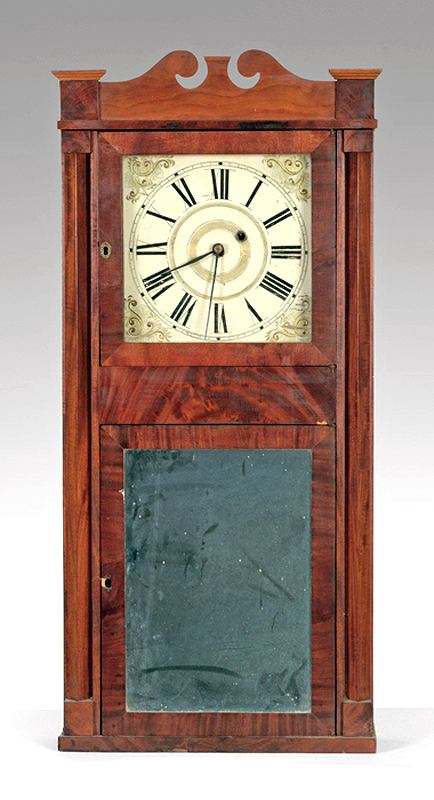 Here we find another 3pc divided door on a Thomas Moses, Auburn NY clock. This clock is unusual for its flat stenciled columns as well as for the divided door. I am generally not a big fan of the plain hump splats, but this one is correct/original. 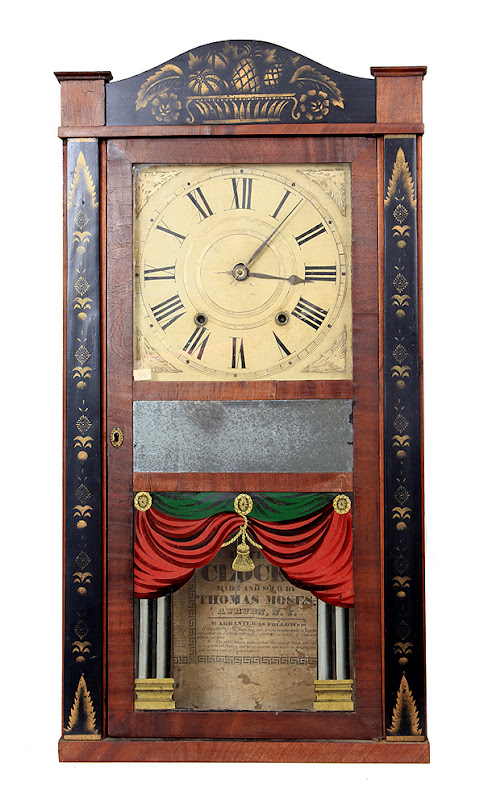 Here we have a very sad looking clock that has seen better days. It has been very poorly refinished, and the top has been badly restored with a ridiculous looking splat and finial combo. It is unclear if all the front veneers have been ripped off. It is by J.J. Beals, NY. (Boardman & Wells), and it has a plain flat front. 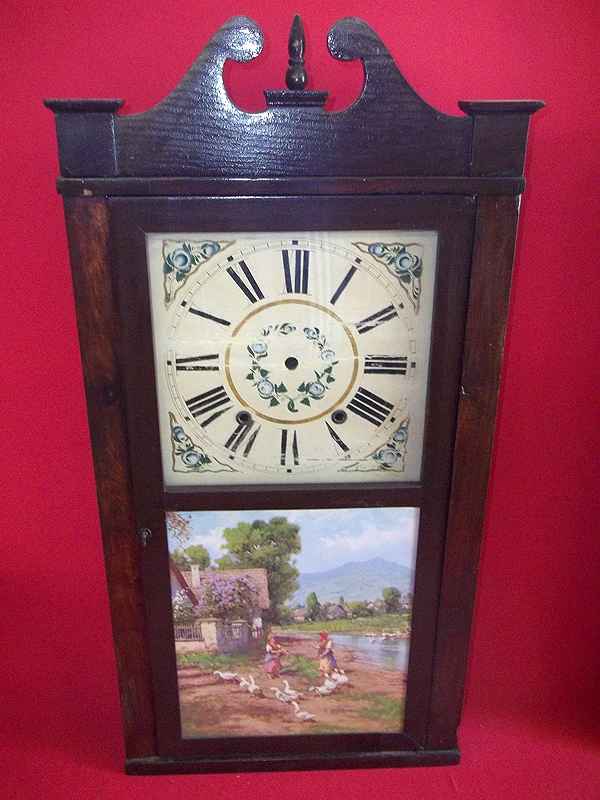 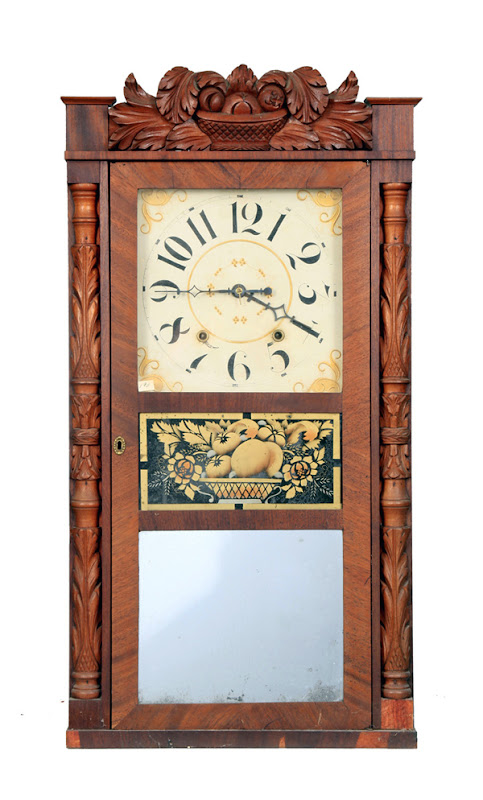 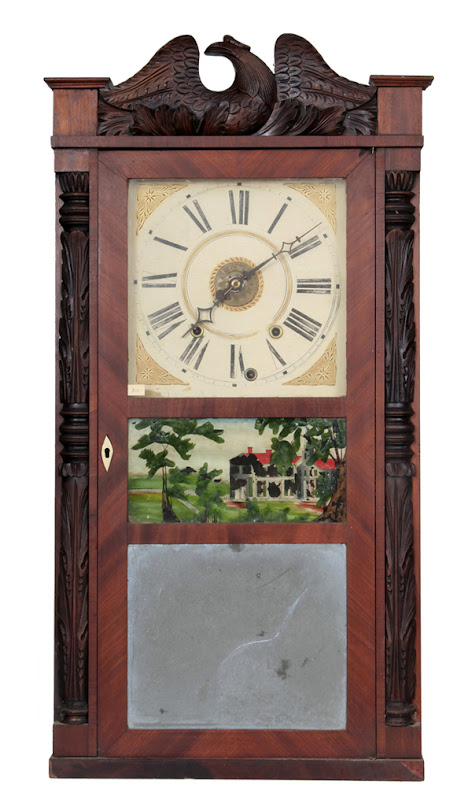 If you have any similar clocks, either with flat undecorated fronts (no columns), or with 3pc divided doors, even better if the centre panel is mahogany, please let me know.
Posted by JC at 10:44 AM