I have a wonderful quality movement that I built from a kit a few years ago, and I've been meaning to build a dwarf clock or a Massachusetts shelf clock (early Willard style case) case for it. For a few years (while working on other projects projects) I've been adding to my archives of clock reference photos in preparation for this clock.

After a lot of sifting through all the various photos, I decided that this was the case I liked the most: 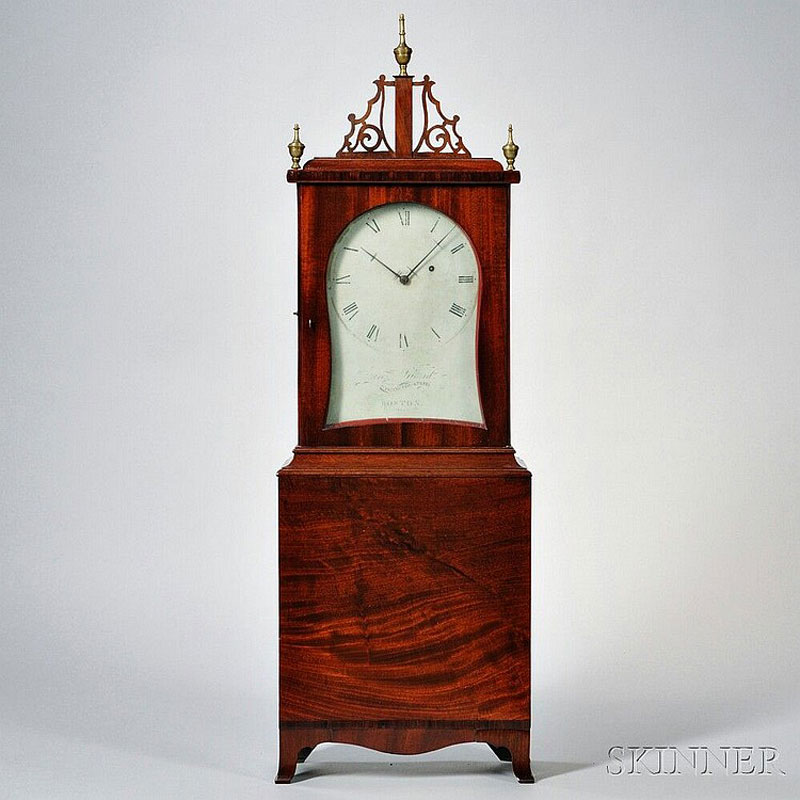 The clock is an early 8 day timepiece by Aaron Willard, and the case measures approximately 39" tall (incl the finial) x 13.5" wide. Based on some conversations with a good friend, I felt that this was bit on the large size, so I scaled the clock down slightly to 36".

The clock was planned out and measured using Photoshop, and a grid to accurately measure all the parts of the case. This shows the fretwork. 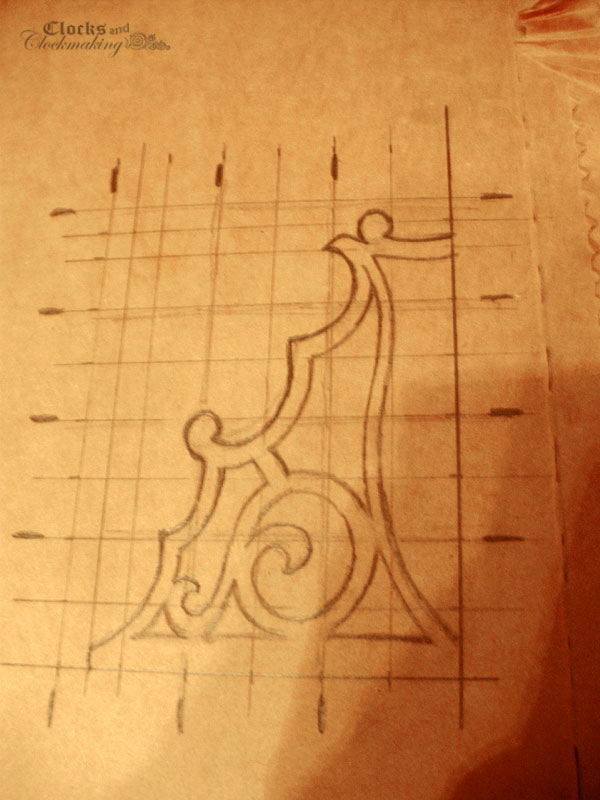 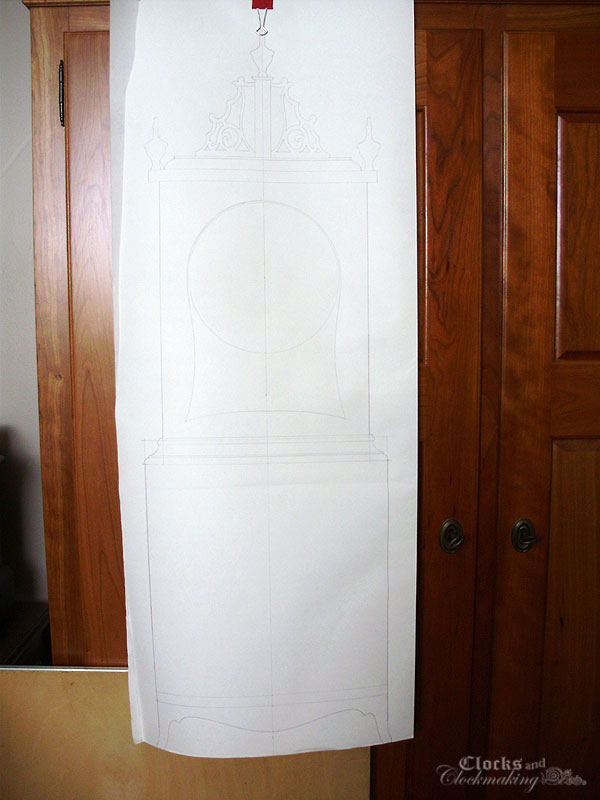 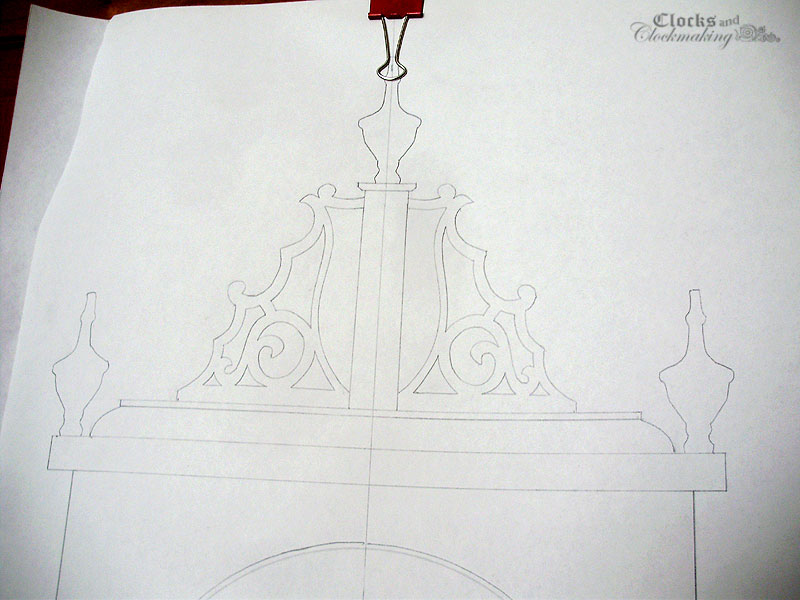 All the patterns for the clock were traced and cut from thin cardboard. 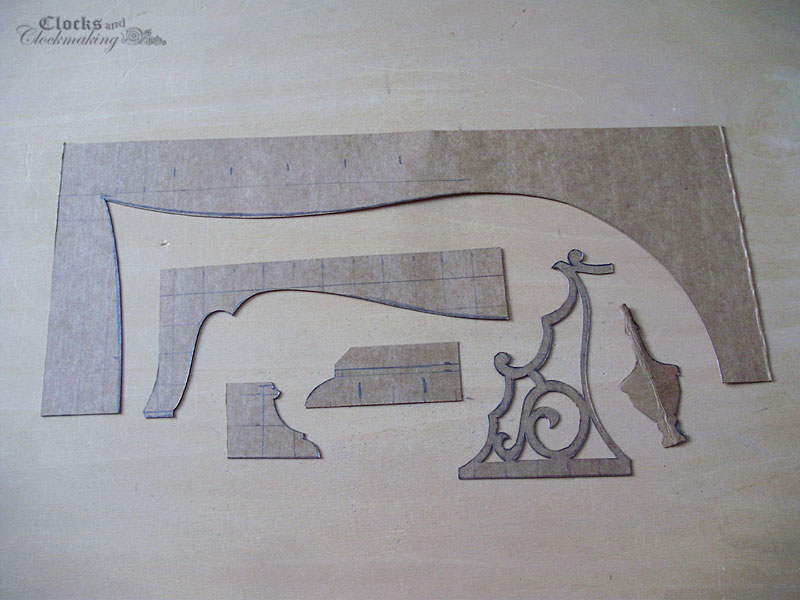 After having traced out the case, it became very apparent that the pendulum length from my movement was not going to work well with this case design. As-is, the pendulum lands in the centre of the French feet. I would need to add about 4" to the height, and I didn't want to mess too much with the original proportions.

Because of this, I decided to trace out "Plan B" which is a clock by Reuben Tower. This clock has a MUCH longer trunk, lovely fretwork to the top, and beautiful decorative veneer work on the base. While I still find the Aaron Willard clock much more classy and stylish, I also quite like this case, and it's one of the designs I kept revisiting. 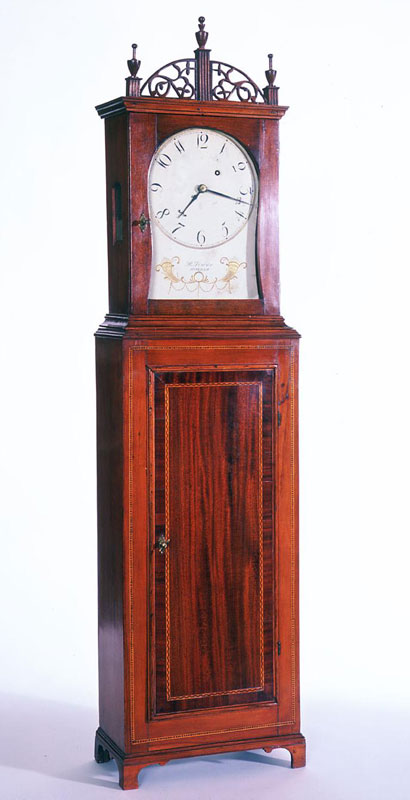 While I like the clock as-is, I decided to shrink the trunk SLIGHTLY, and add a curved base to the bottom of the kidney dial (99% have a curved base and I don't like this flat version).

The same process was used to measure and trace the clock. 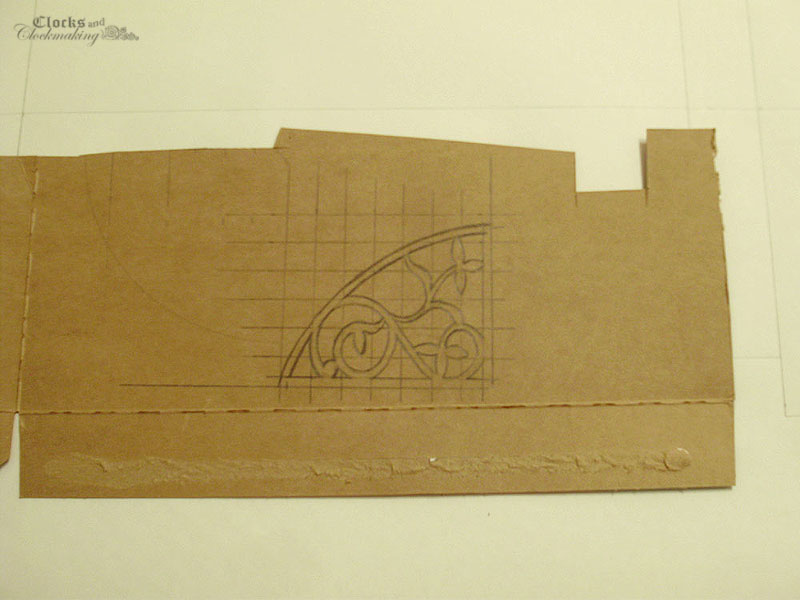 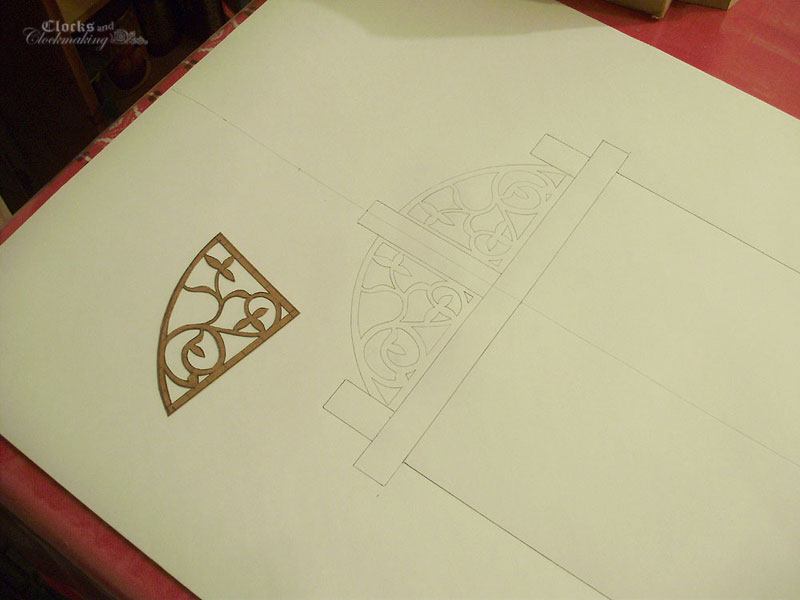 The finished clock will be quite large. 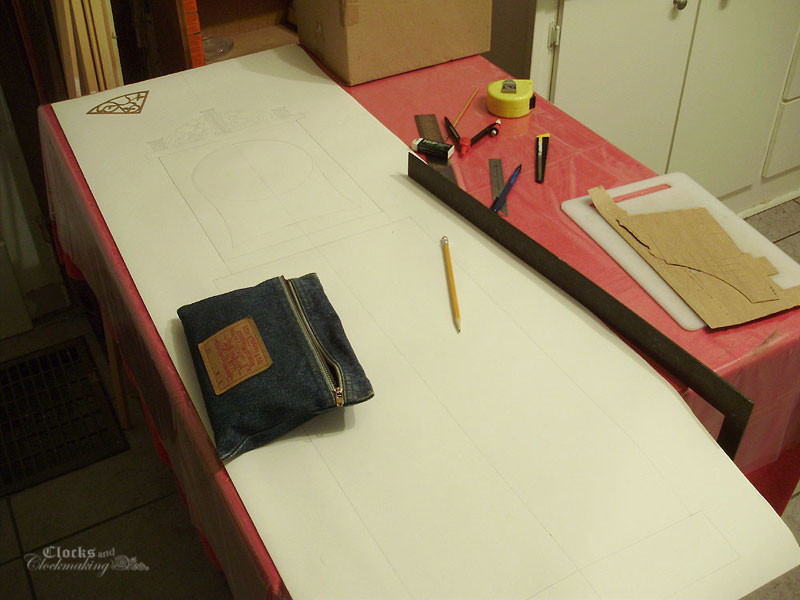 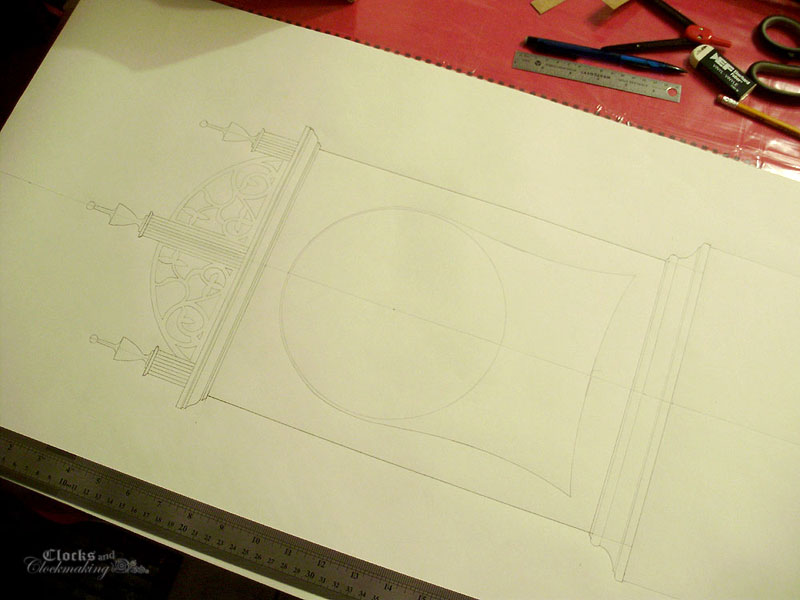 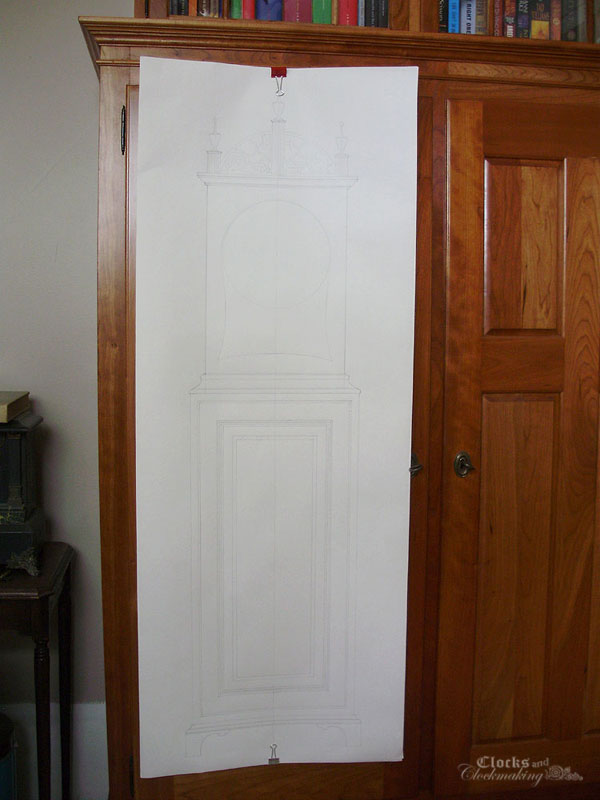 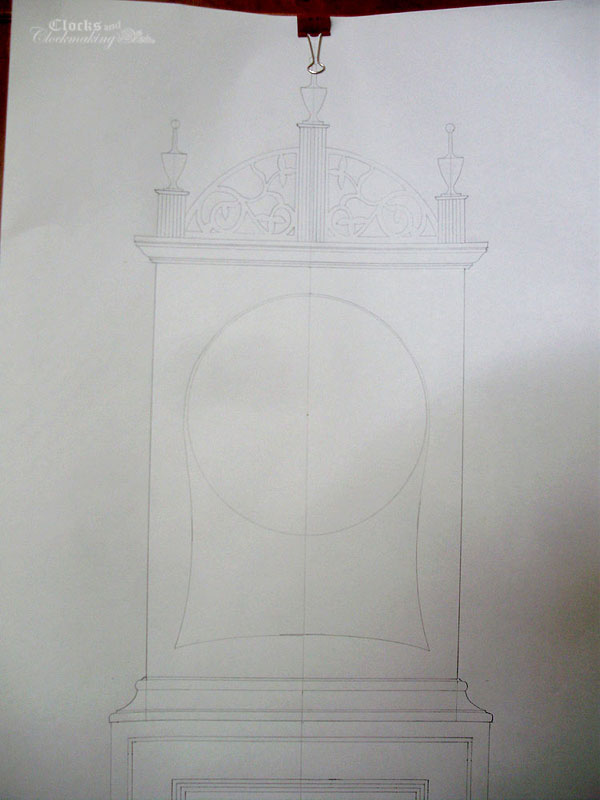 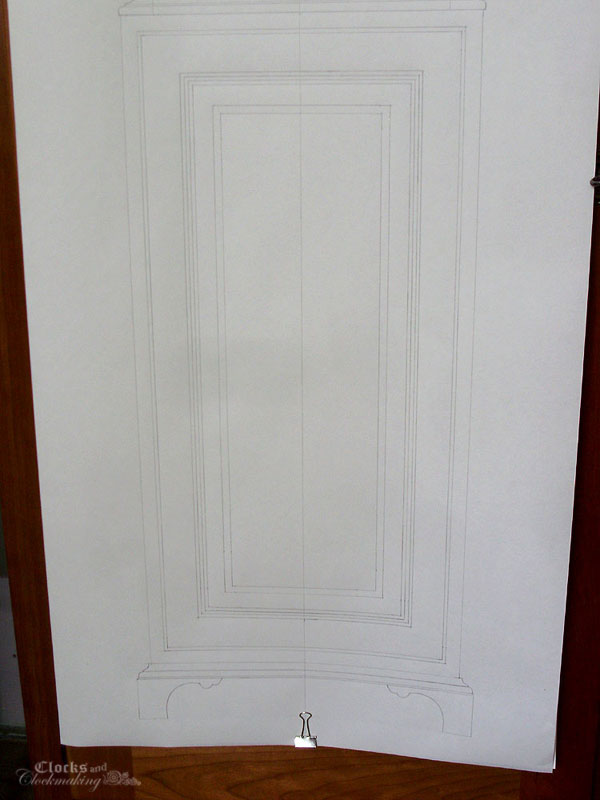 One of the advantages of this particular case design is that it features a door in the trunk. Several of the other designs (such as the Aaron Willard) have a fixed bottom panel, which simply creates an inaccessible "well" for the base of the clock. The top hood on all these clocks slides forward to access the movements.
Posted by JC at 9:08 PM