A Rare Find (AKA: The "Mystery" Wooden Works Clock)

I try not to overuse the term "rare" since so many people throw the term around meaninglessly, but in this case, it's not an exaggeration.

I bought this clock earlier this year (May 2014), and I meant to post it here sooner. I came across it on eBay, and since it's just barely even a case, it didn't attract too many bidders. I usually AVOID buying this kind of clock because putting it all back together will cost far more than buying a complete original clock. If you assume that a movement will cost around 80-100$ plus shipping, plus a painted dial to fit, at around 50$ plus shipping, in addition to hands, a bob, a pair of weights, recreating a backboard, fitting antique glass, and rebuilding the missing top, it hardly seems worth the trouble and expense. Especially since it's such a plain case.

HOWEVER, what attracted me to this particular clock case is it's incredible rarity. WHY is it rare? That can be a bit hard to explain, but in short, because of the way that the door is divided, and the lack of columns. More on this shortly.

As a quick side note, I just want to point out that just because an antique is rare, it doesn't necessarily make it more valuable. I would think that if this clock were complete, and placed in an auction, it would fetch about the same price as similar wooden works clocks, but I could be wrong.

The original eBay photos were quite decent, so I've included them along with some of my own. 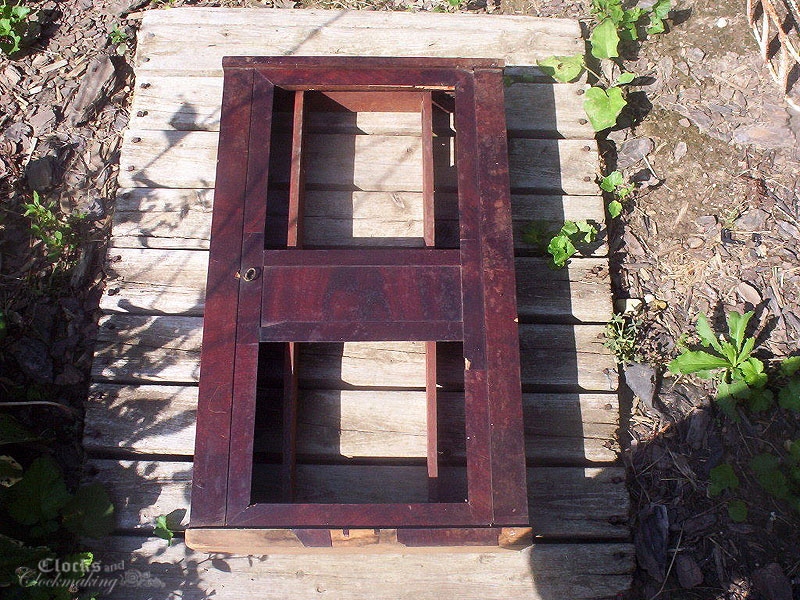 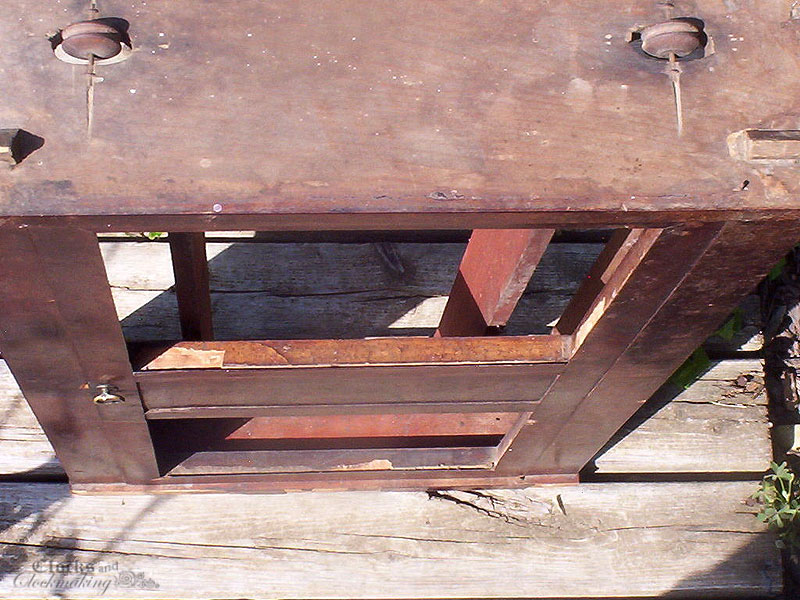 The latch is a typical "key" shaped one from around the late 1830s, and into the 1840s. It has been damaged and bent downwards. 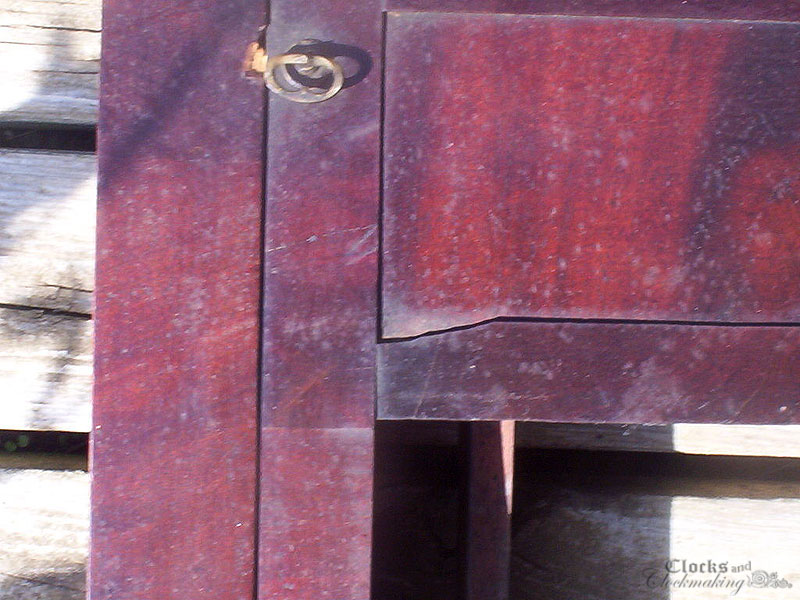 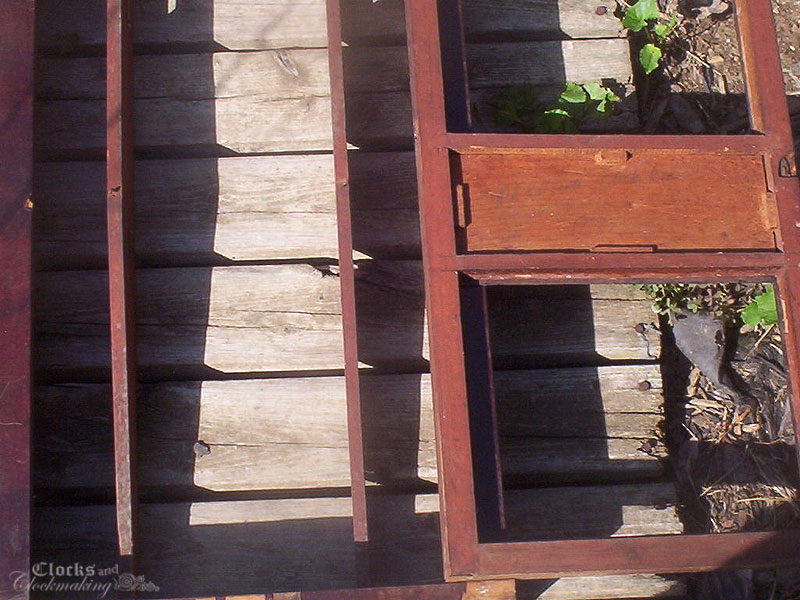 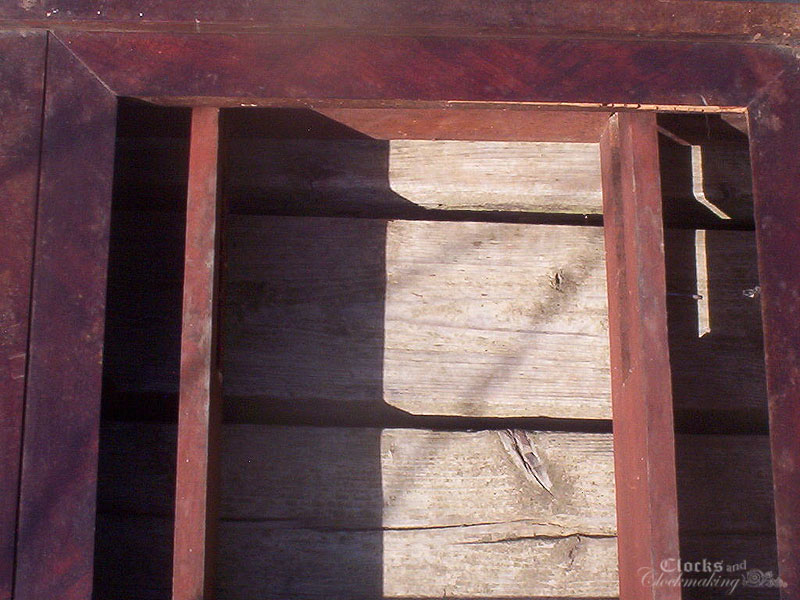 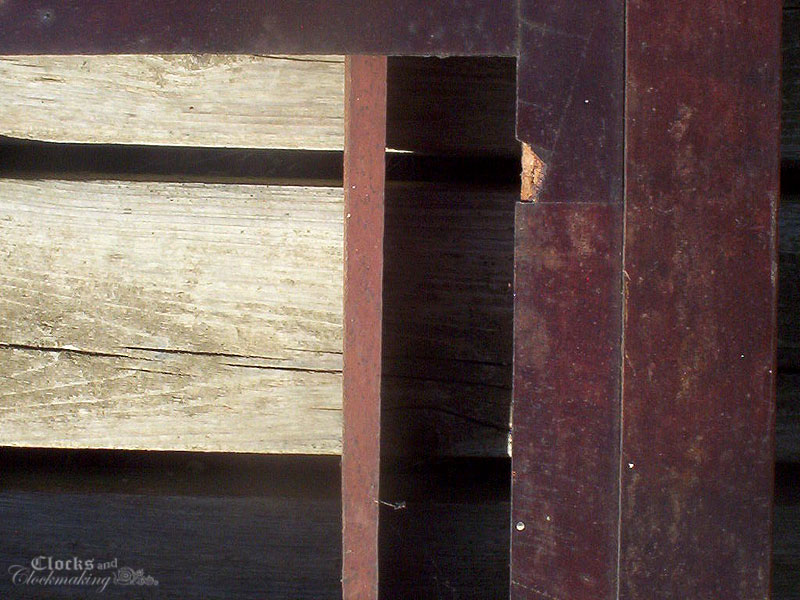 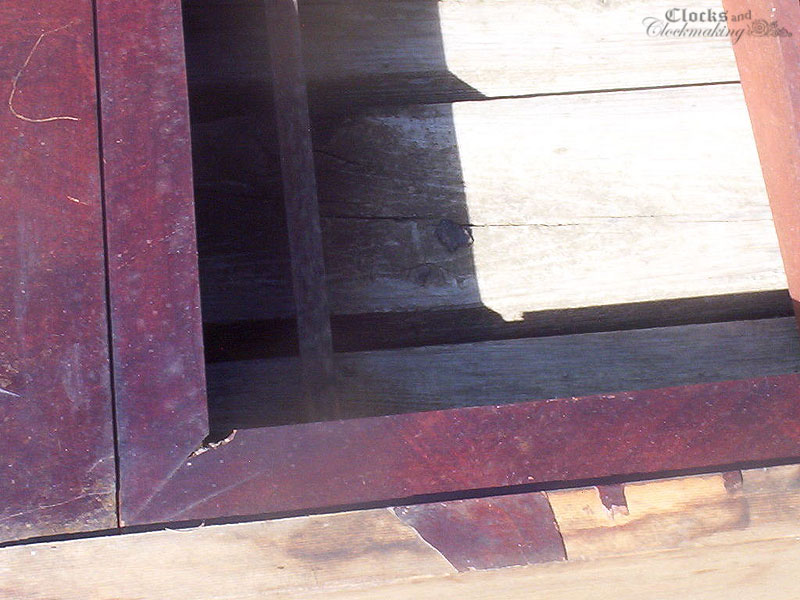 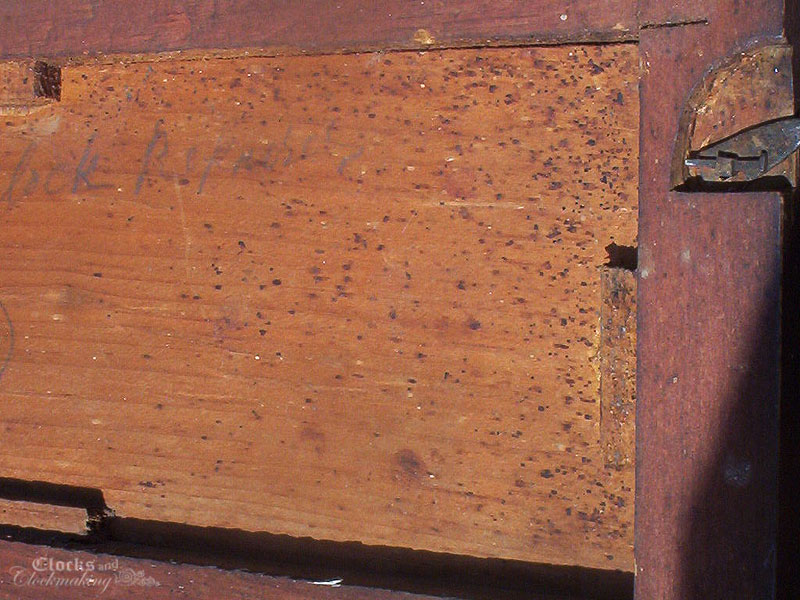 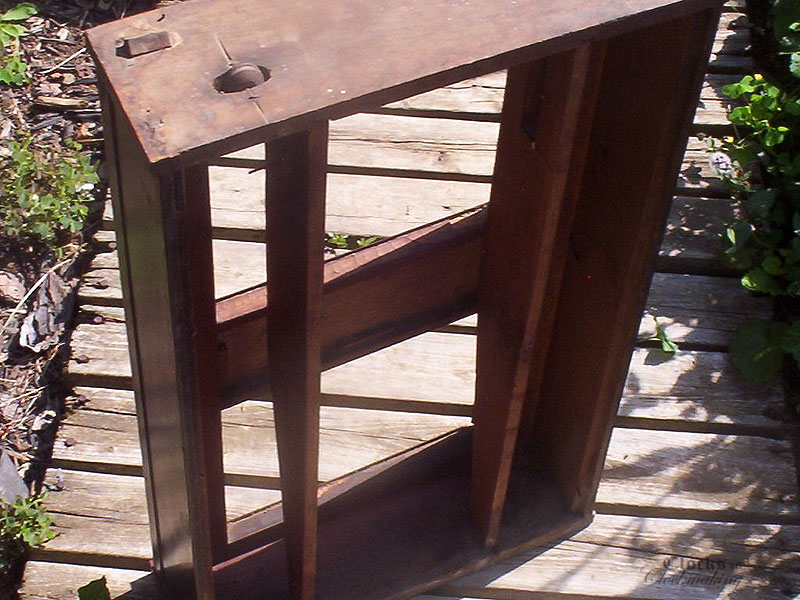 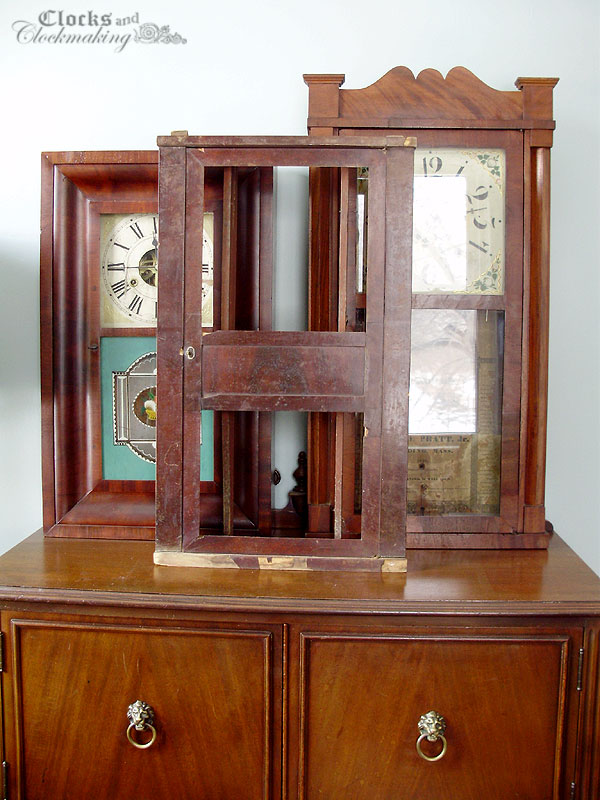 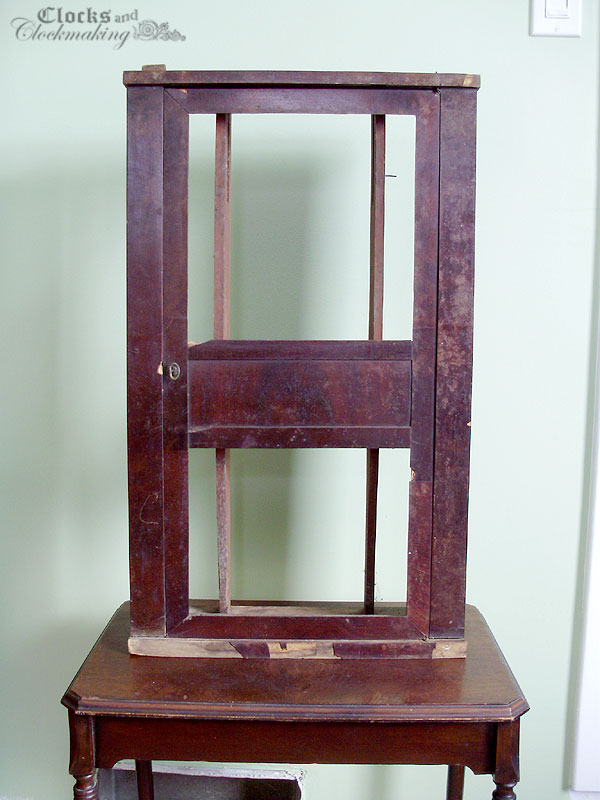 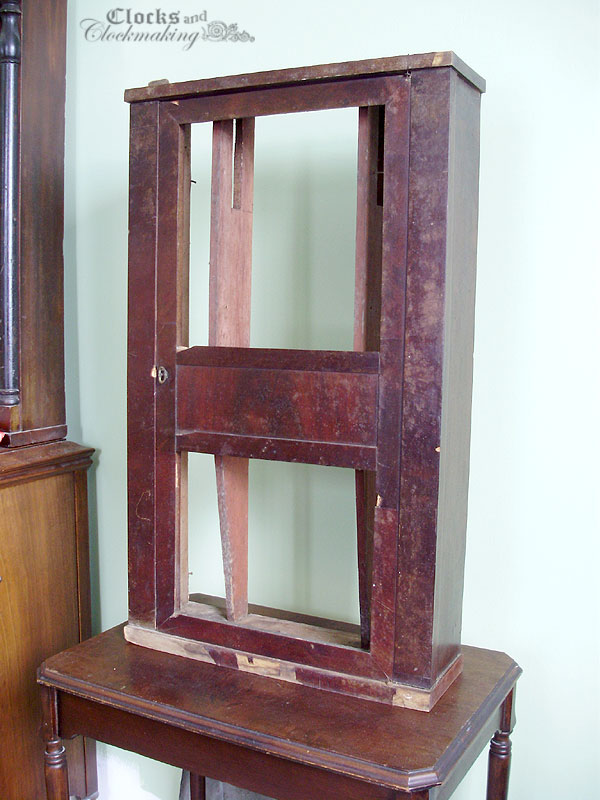 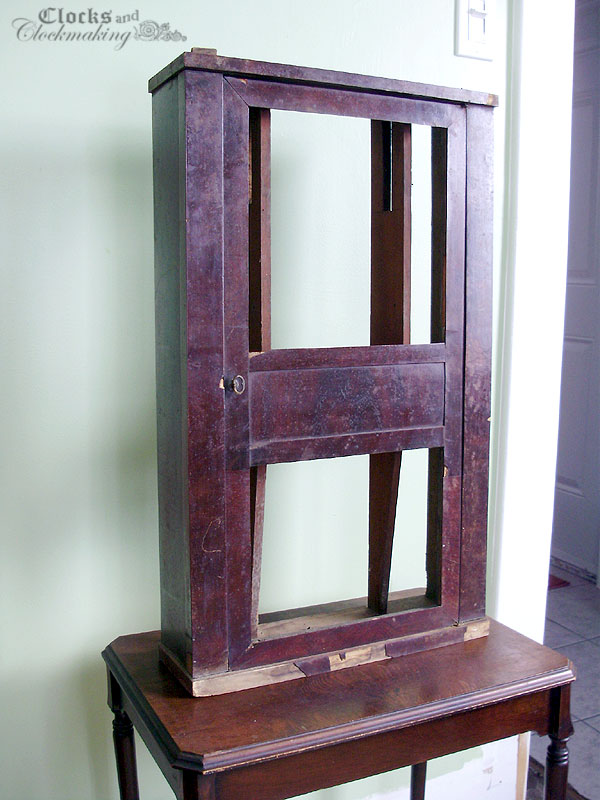 The inscription behind the central door panel (enhanced below) appears to read W. C. Kilbreath Cumberland Clock Repairer one year (Good). It would have been nice to have a date with this note. I was able to find one mention of a W. C. Kilbreath in Cumberland Ohio in an old National Tribune paper dated Jan 30th 1896, but that's all I could find.

EDIT: News! I think I found him! Unfortunately there's no mention of clock repair, but it's highly possible he worked on clocks after he retired.

OBITUARY: JEFFERSONIAN Oct. 30, 1900
After an illness of but one week, with congestion of the lungs the venerable Wm. Calvin Kilbreath died at his home north of Cumberland at about 9:00 p.m., Tues. aged 72. He was born near Booth's Ferry, VA (now W.VA) sept. 18, 1828 and was married to Mary Nelson on Sept. 9, 1851. To this union eleven children were born, nine of whom survive. On the 7th of Aug., 1862 he enlisted in Co. B, 97th O.V.I and served 14 months, mostly as a hospital nurse. He was a faithful soldier, doing duty wherever assigned. Mr. Kilbreath was a member of the Presbyterian Church and was affiliated with the O.U.A.M. and G.A.R. His patriotism knew no bounds and upon every occasion he delighted to honor and display the flag for which he fought. He had been a resident of this vicinity many years and was highly esteemed by all who knew him. Beside his aged and grief stricken wife the following named children and 16 grandchildren remain: Peter N. of Cambridge; James C. of Cadiz; Margaret A. Smith of Spratt; Ella M. Moore of Zanesville; Martha E. Fox of Cumberland; U.G. of North Baltimore; C.A. and Dora O. Yerian of Cumberland and Wm. H. of Buffalo, OH. Funeral at the Pres. Church, 1:00 by Rev. H. C. Morledte. Remains laid to rest in Cumberland Cemetery. 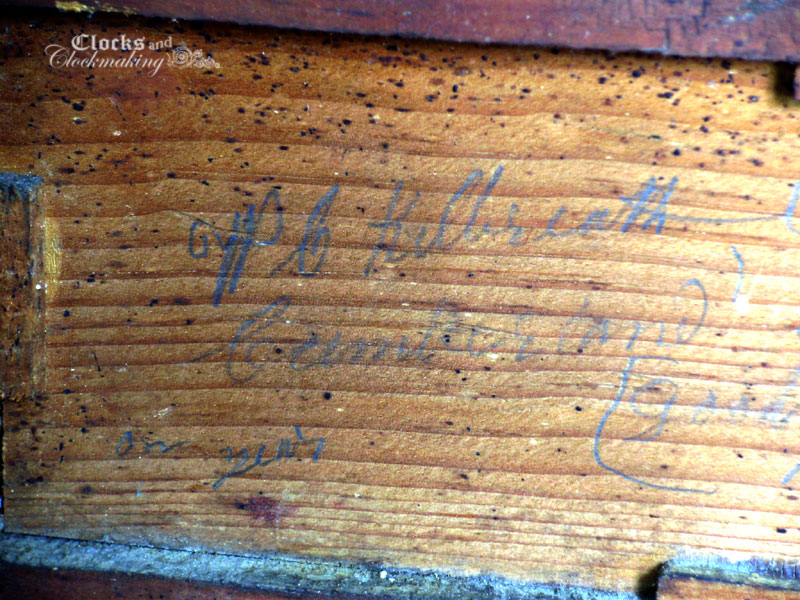 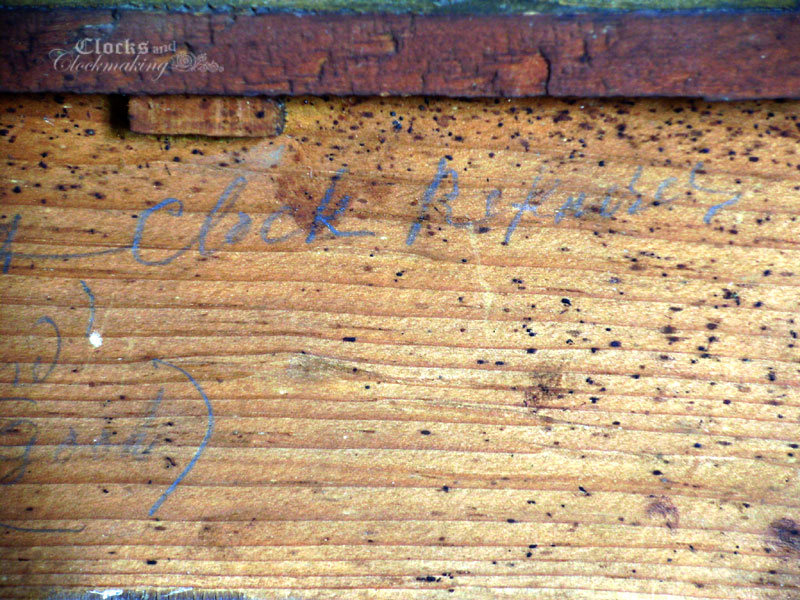 Now, as I said, part of the reason this clock is so rare is because of the way that the door is divided into 3 sections. Very few clocks have doors with narrow panels in the centre. Several will have divisions at the bottom, like the clocks made by Silas Hoadley, which usually have a mirror below the dial, and a small painted tablet at the bottom with the "Time is Money" inscription. Almost no other clockmakers used 3 part divided doors. Many clocks have 2 doors, or built-in wooden panels that separate two doors (or a fixed panel under the door), like Putnam Bailey clocks, but none are divided like this particular clock. It's also highly unusual to see a wooden works clock case without turned columns, triangular columns, flat columns, reeded columns, or even flat/carved columns (like some rare Bishop & Bradley clocks).

I have archived (over the past decade) thousands of photos of rare and interesting clocks, both in the form of books (dozens) and from online sources (private collections, eBay listings, online auction houses, etc) and after hours of sifting through these, I found only ONE very similar clock made by Elbridge Atkins (sometimes misspelled Eldridge Atkins). The clock can be seen here: 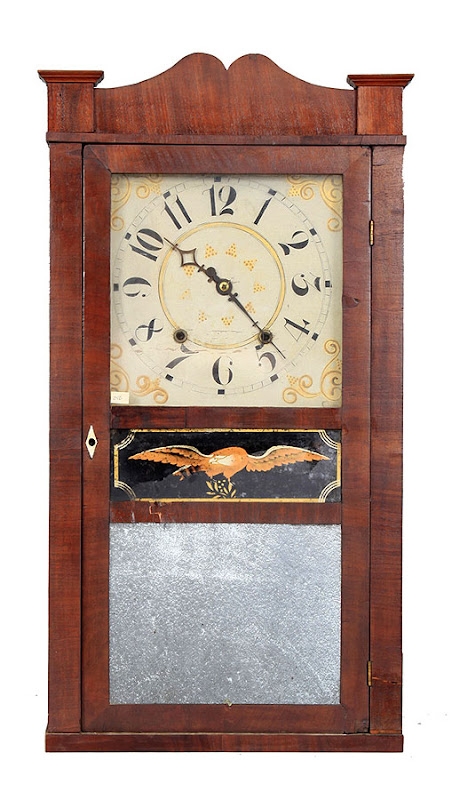 It's not identical, only similar. It has a centre divided door, plain side pieces (no columns) and has a painted eagle tablet rather than a mahogany panel. Two other differences are the width of the side pieces flanking the door, and the use of an ivory keyhole escutcheon and "Terry" style lock instead of a simple catch. My clock has evidence that it had top chimneys, splat, and return pieces, but I can only guess what they might have looked like.

Just recently, I came across a second Elbridge Atkins clock which was sold in 2009, and that looks nearly identical to the one above. The main difference is the dial. The hands are not original. 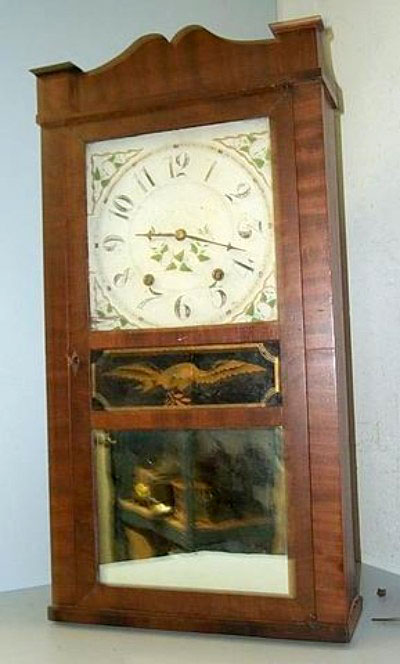 Elbridge Atkins clocks on their own appear to be quite scarce. I have found only a few examples. This one is a typical column and splat wooden works, but it shows the label, and provides another possible splat design. 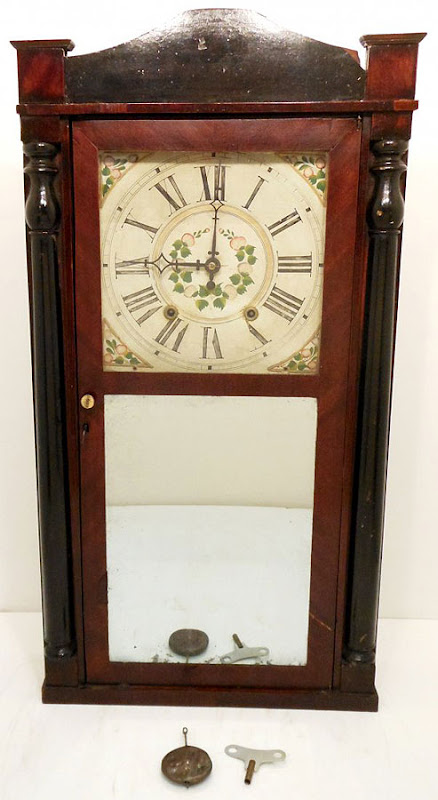 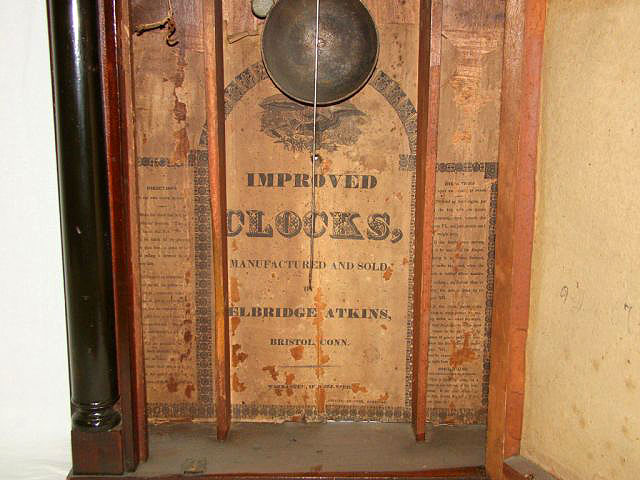 Lastly, a very unusual find was this very poor photo of an Elbridge Atkins "Bevel Case" clock, with a 3 section divided door. Bevel case clocks are early versions of Ogee clocks, and often have wooden works movements, and date to the 1830s or 1840s. 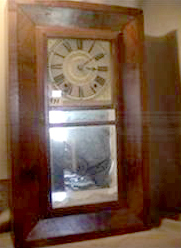 And that's all the information I've been able to gather. I'll be able to easily recreate some chimneys for the top based on the shadows, but I will have to guess the correct splat and side return designs unless I can find other similar clocks to work from. I'd appreciate any information you may have about this clock (including any other Elbridge Atkins clocks).
Posted by JC at 11:33 AM