I won't even pretend that I haven't been neglecting this blog. For a few months I've been procrastinating about working on the Dalrn longcase, but I've gotten back to it in the past few weeks. Every few days, I've been working on it for about 30 min to over an hour.

This is a "catch up" post from the past several months (some of these photos go back to March).

I started working on the swan neck crest by first dis-assembling the improperly glued (misaligned) pieces, and scraping off most of the glue. It seems as though this clock was damaged a fairly long time ago, since most of the repairs were done with hide glue. 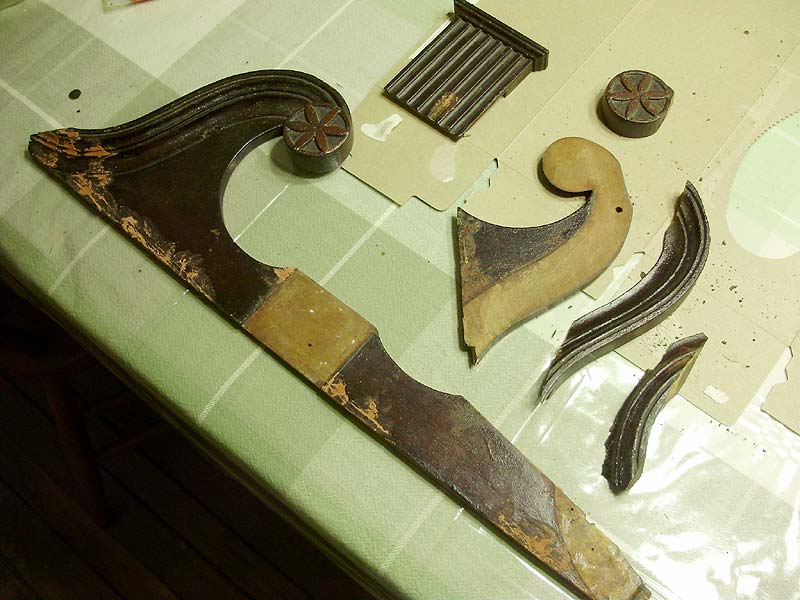 Several nail holes and small cracks were filled on the left side. 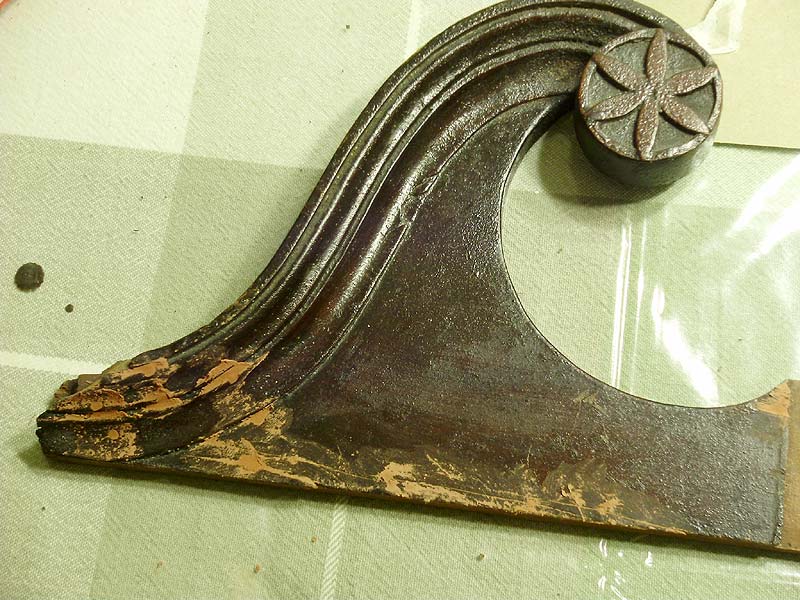 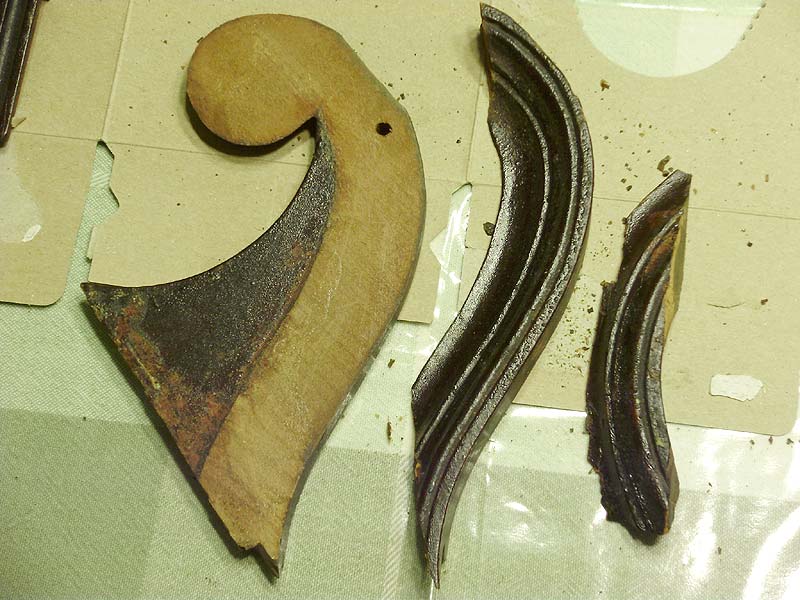 This is a dry fit showing the proper alignment of the broken pieces. You can faintly see where they had previously been glued (hazy line about 1/8" to the left). 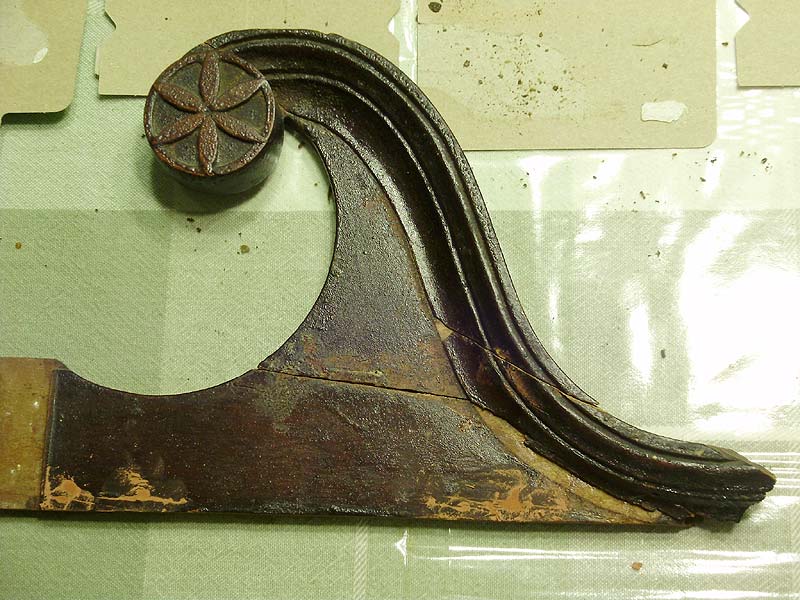 Paint touch-ups to the filled/puttied bits. 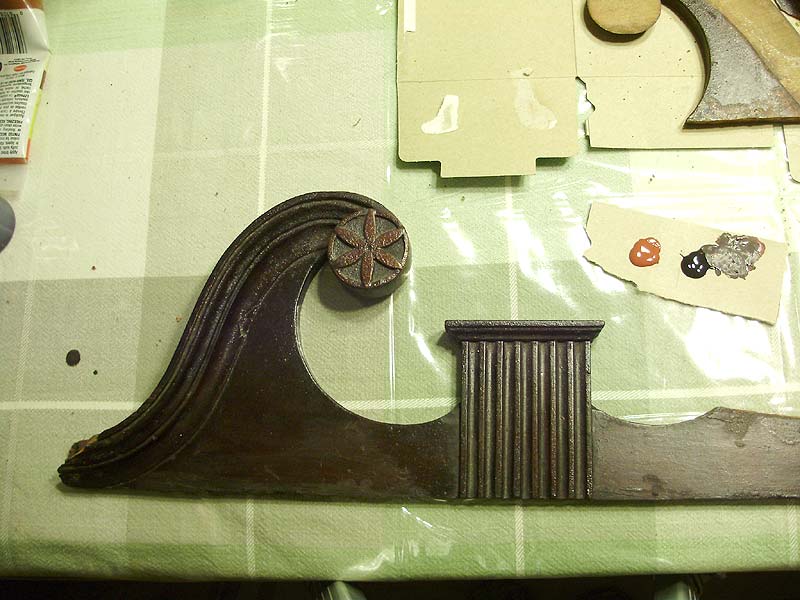 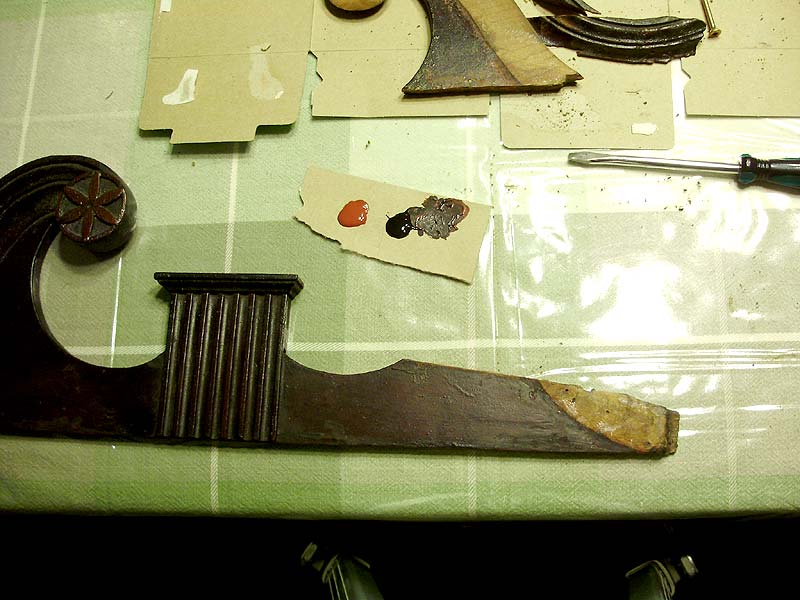 Another nasty discovery was made. I found that the canon pinion that carries the hour wheel was badly broken (the repair is shown farther down). 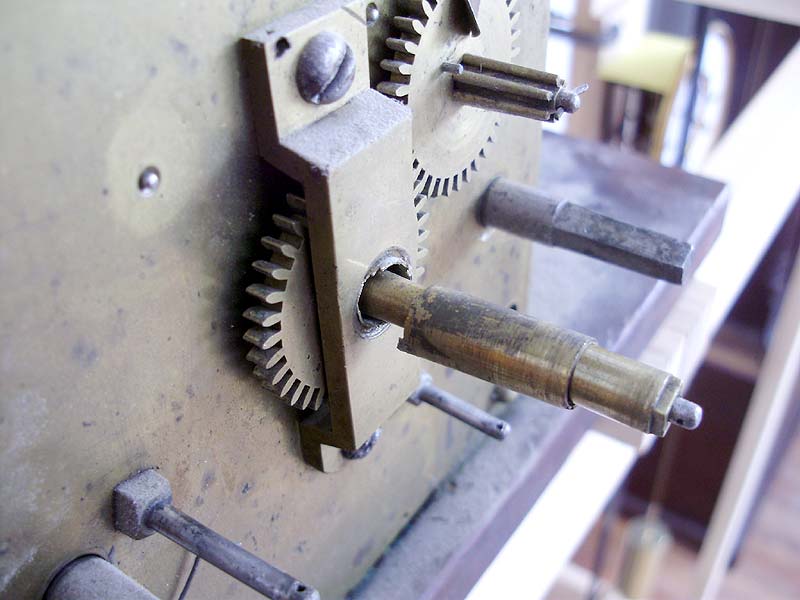 Several of the dial feet that hold the sub-plate in place were broken. 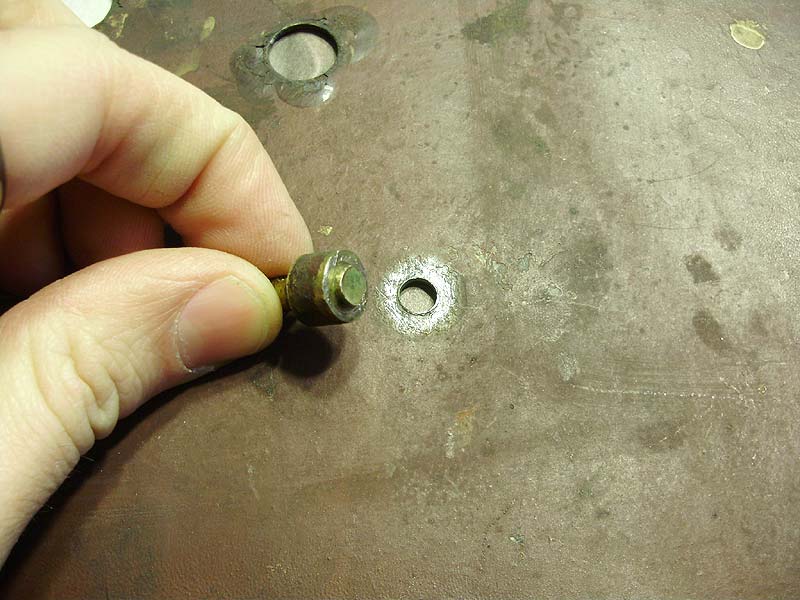 These could not be repaired mechanically (which would involve heavy hammer blows to the front of the dial) so instead, I had to resort to a modern fix: JB Weld. I have found that this product, when properly used, can be a very good repair to fragile, or difficult pieces. Once it's cured, it's incredibly strong. 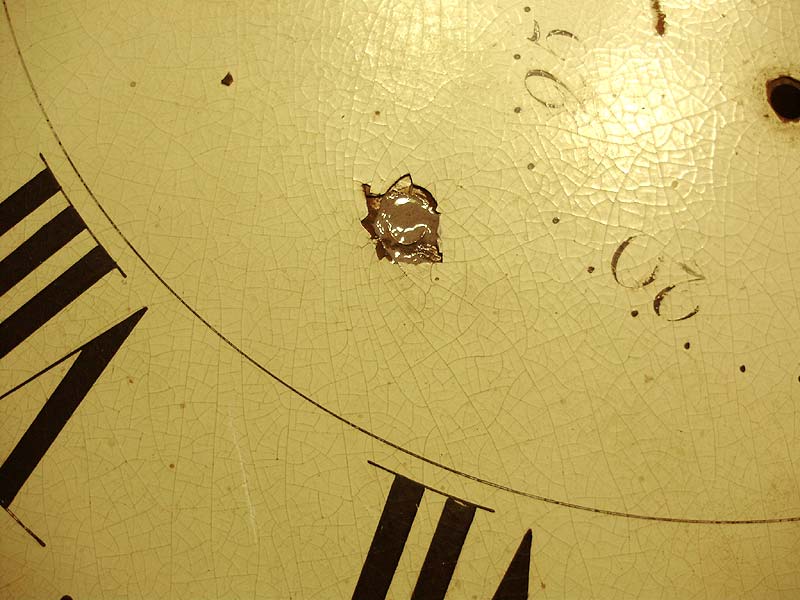 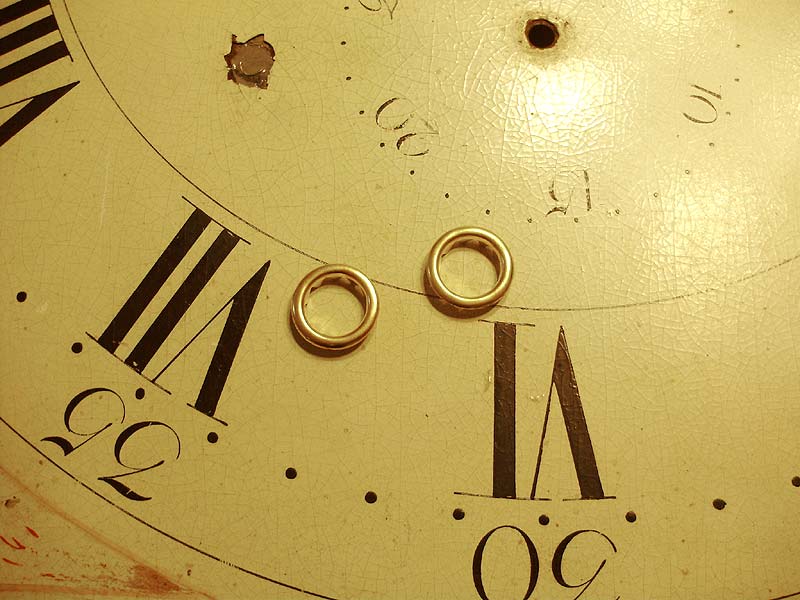 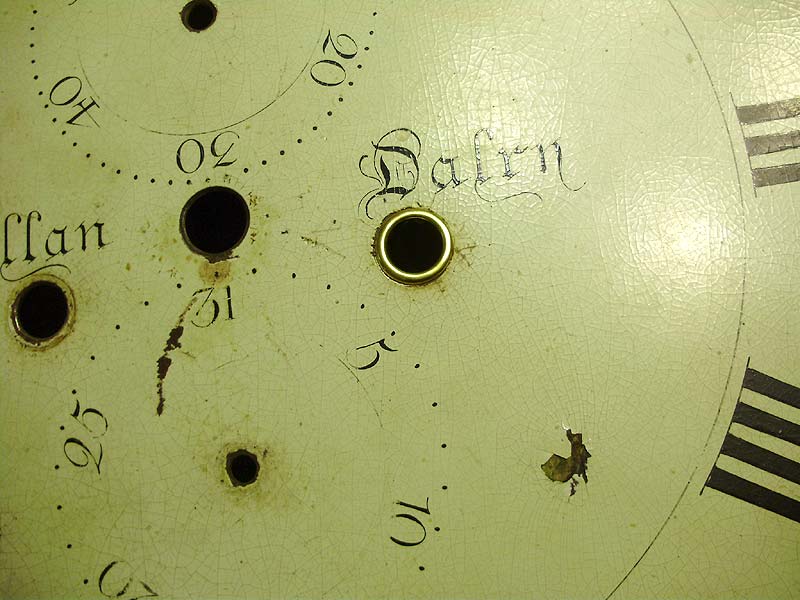 The grommets were then stripped of any finish, and antiqued. My method involved heat, and spray paint, but there are dozens of methods for artificially aging brass. 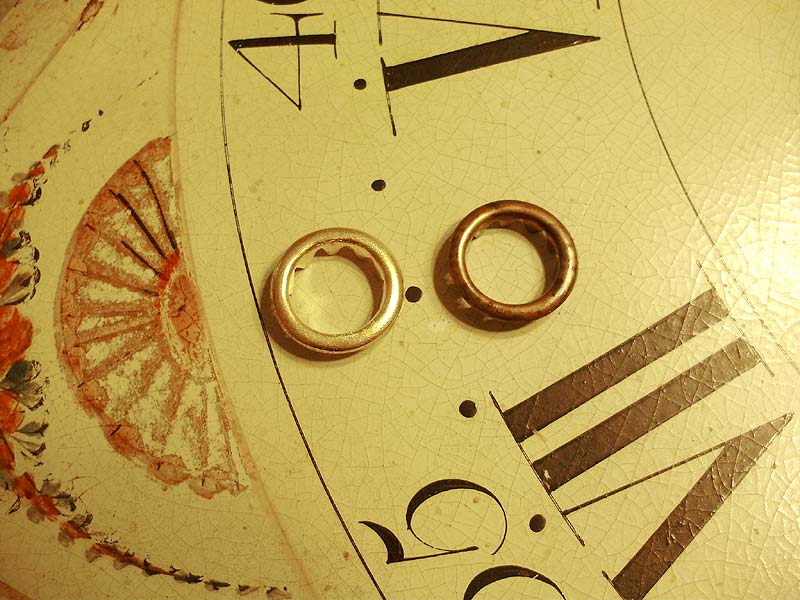 The repair to the hour wheel bridge was tedious, and difficult. At first, I tried to resolder the break, and this proved unsuccessful after at least 3 attempts (too small of a contact surface.

To fix this properly, I had to grind down the pipe slightly until the end was square, and then add a slight taper to it (like sharpening a pencil). On the bridge, I reversed the taper, creating a bit of a cone into the hole. This created a nice snug joint, and allowed for a good surface for the solder to flow into the joint. In the end, I only lost a tiny bit of the original length of the pipe (less than 1/16"), and the pipe's length is not critical.

This was the repair after soldering, but before cleaning and polishing. 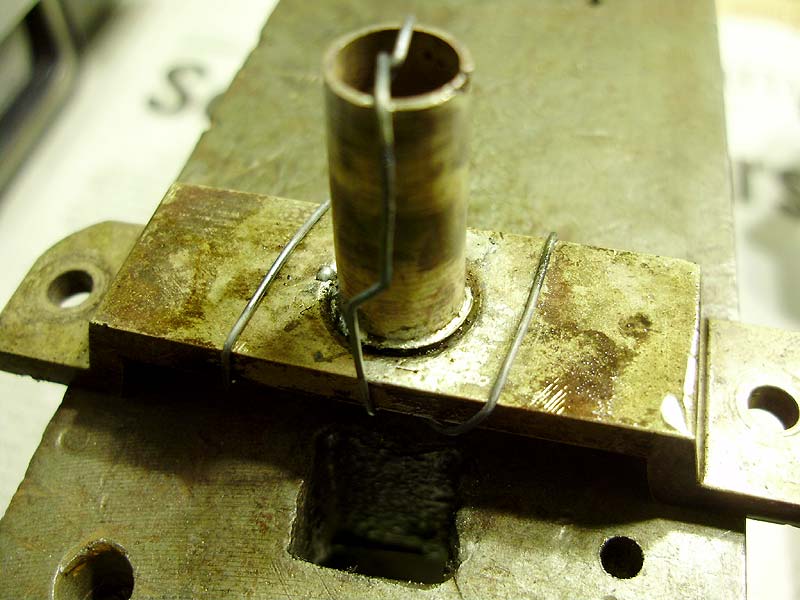 Dial feet after curing (and before painting over the grey). 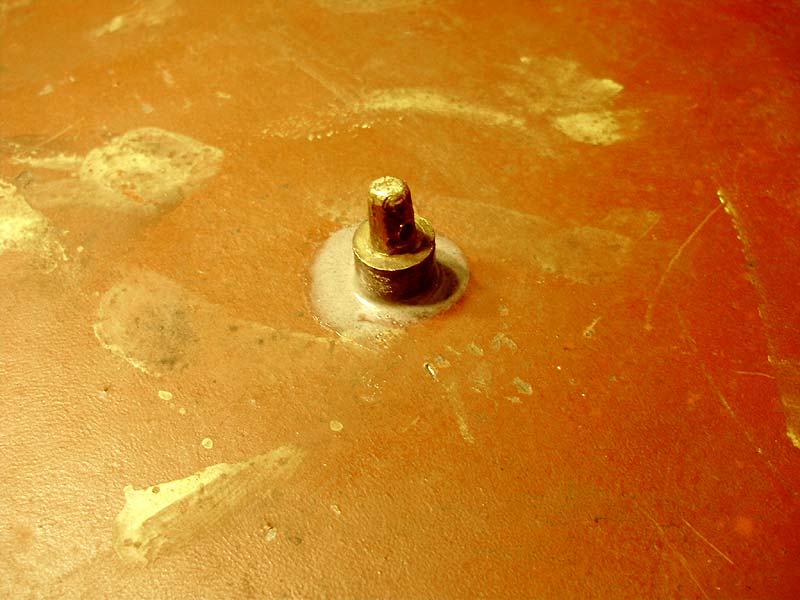 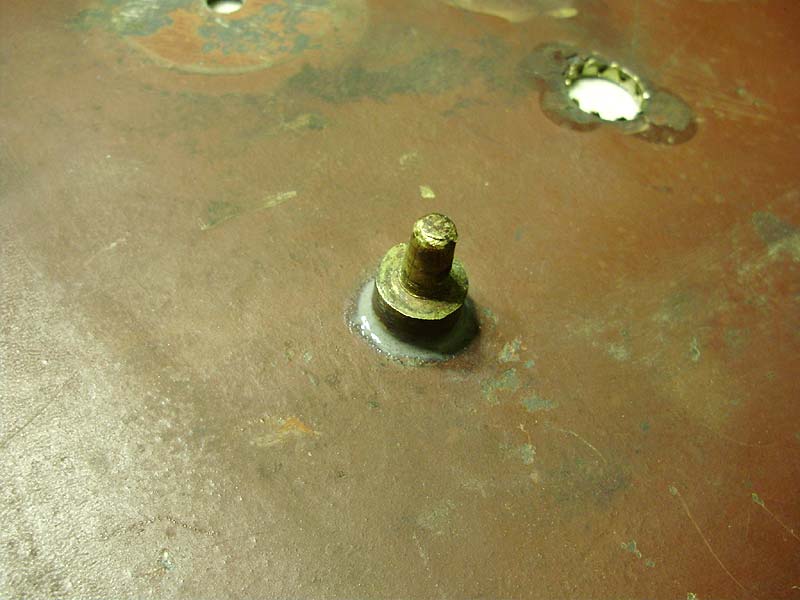 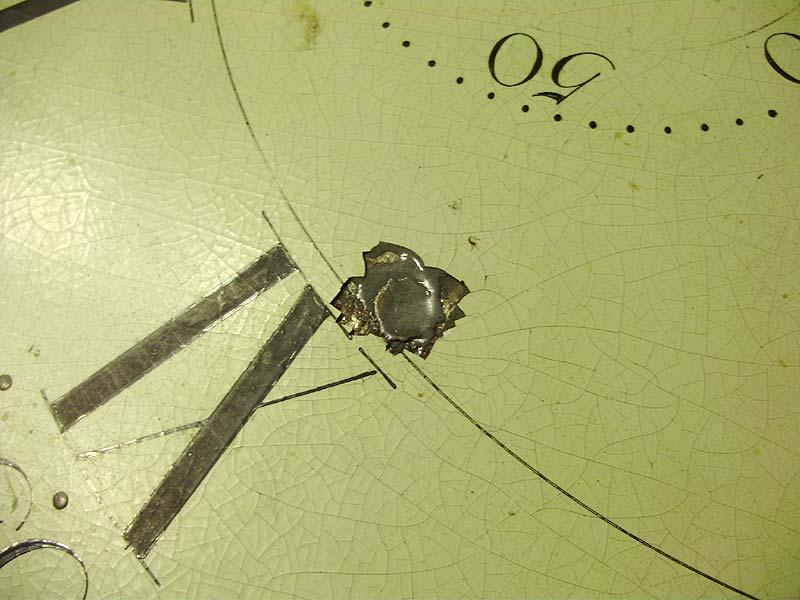 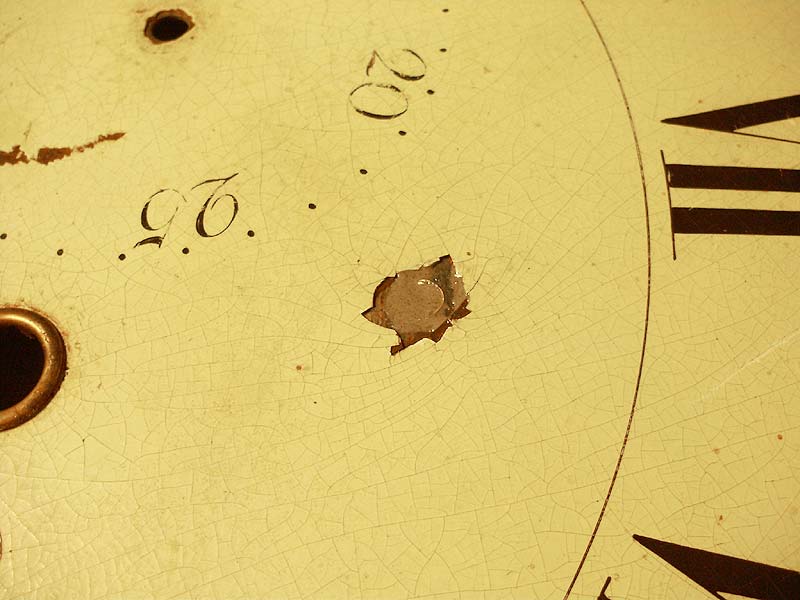 Antiqued grommets installed. I'm quite happy with the finished look. They look as though they've always been there. The dial was then patched, painted, and given a light coat of clear paste wax. I prefer to keep just a few of my "secrets" to myself, and my method for dial restoration is one of them. The colour matching is not 100% perfect, but it's as close as I could get. 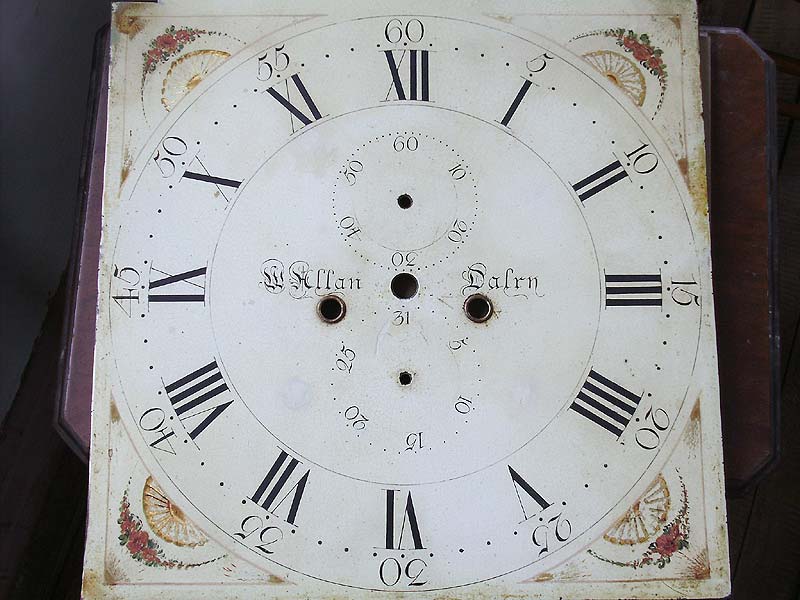 Fast forward a few months, and now we're back to a few weeks ago. I started to work on repairing the extensively damaged hood. This is a replaced section of moulding. I used a rectangular section of mahogany, and hand-carved the cove moulding. 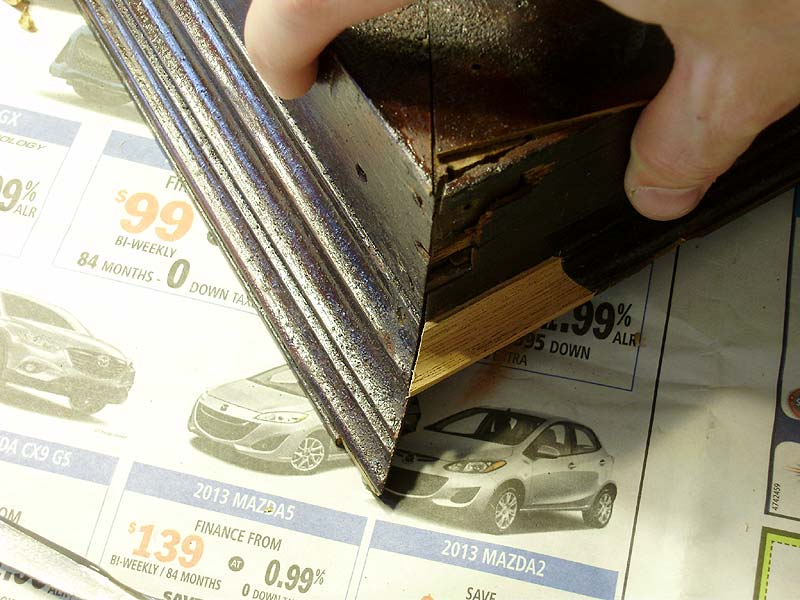 I also started to repair the main case. As you can see, a board was used as a patch for two broken rear feet. This board was removed, and I trimmed both feet square/flat to prep them for new mahogany patch pieces. 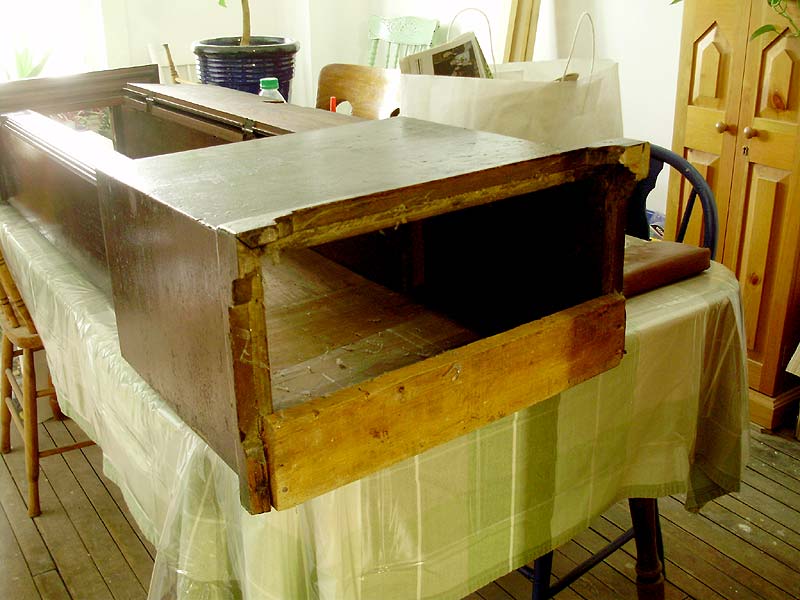 Last time on the blog, I showed the repair of the Samuel Terry wooden works clock, but I also repaired the top on the Boardman & Wells (shown below), the broken finial tip on the MB Vienna, and the broken door knob on my Seth Thomas Sonora.

The top on the Boardman & Wells suffered the same fate as the top on the Samuel Terry: snapped off during the move to the house in 2010. An easy fix. You can also see one side of the hood in the clamps. 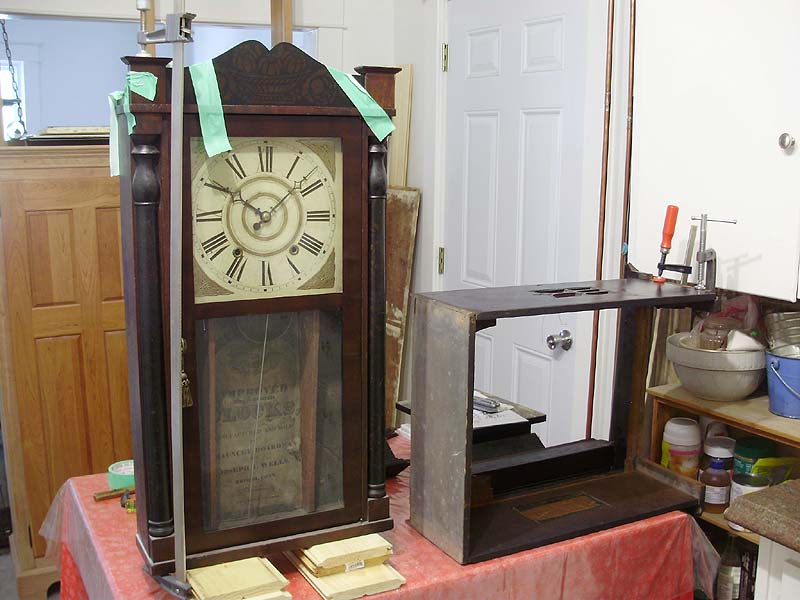 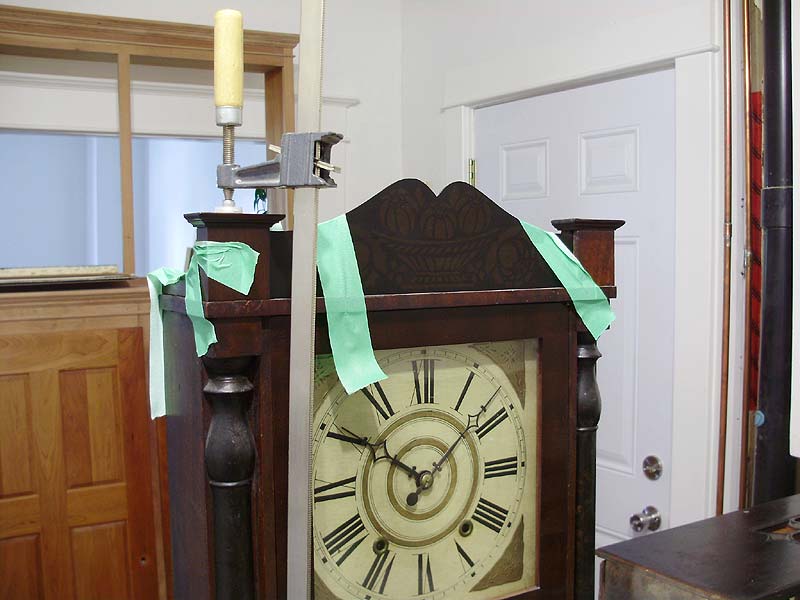 Some of the hood's crest pieces, and the swan neck crest (mostly repaired). 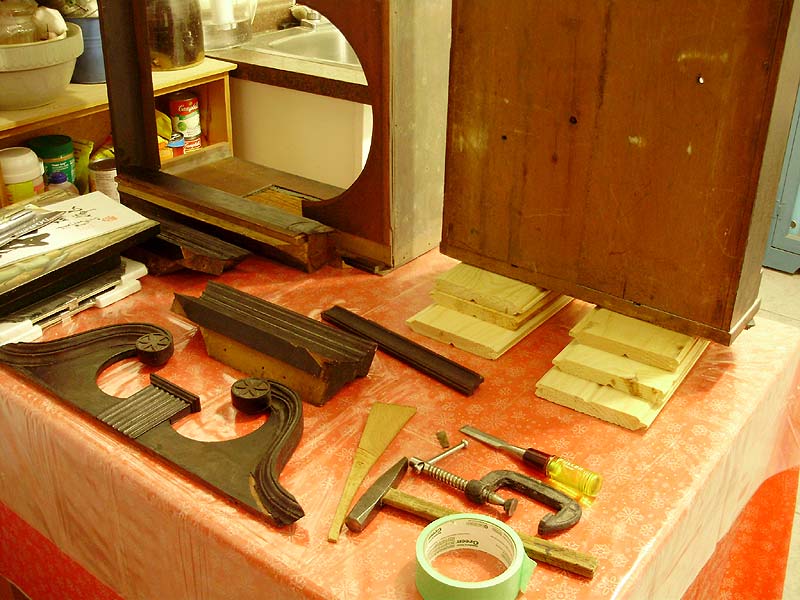 The large moulding over the base of the clock case was reattached. 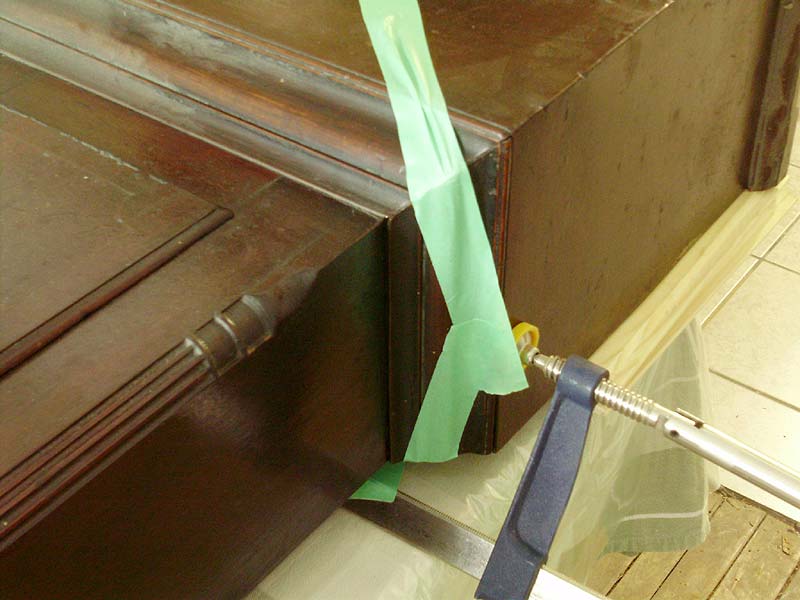 This was done this weekend. If you will recall, the hood was missing the right hand side piece from the dial mask. This piece was recreated by using 2 very thin pieces of clear pine. The original was probably one piece, but it's hard to tell, and it was easier to fabricate accurately in 2 pieces.

This piece was actually quite complicated to make. The piece has two notched teeth on the ends that slot into the top/bottom pieces. I goofed on my initial pattern, so these two teeth had to be added separately. 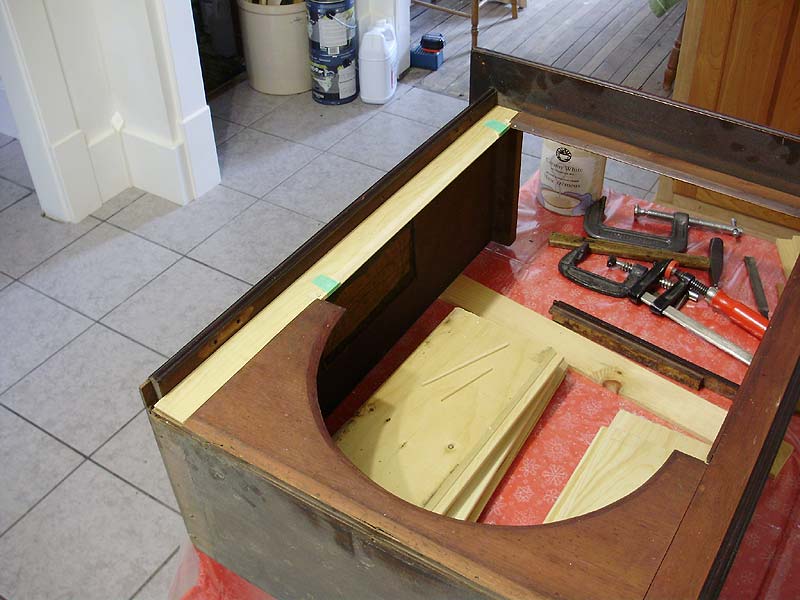 The piece was then hand carved to match the bevel edge around the rest, and stained/antiqued to match the rest of the dial mask. I'm quite happy with the results. I used a mix of two gel stains, followed by a diluted acrylic paint "wash" over the top. It's a near perfect match. 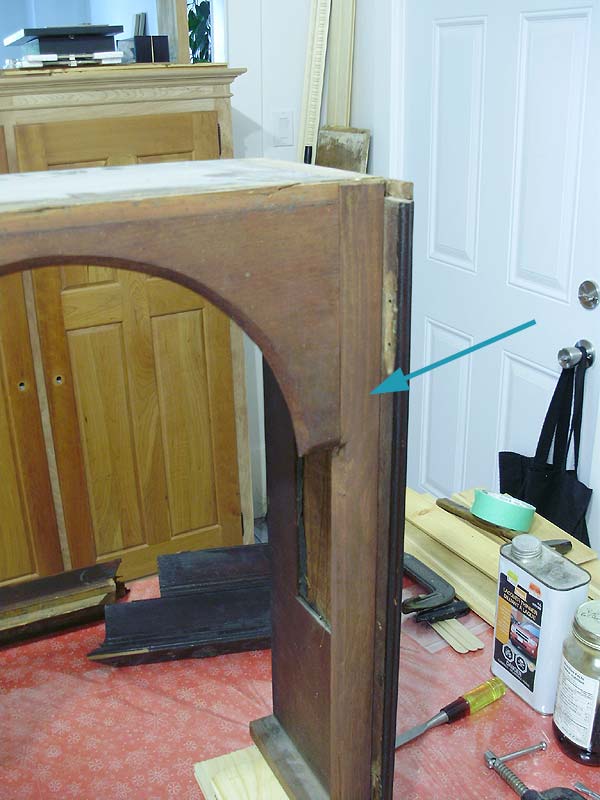 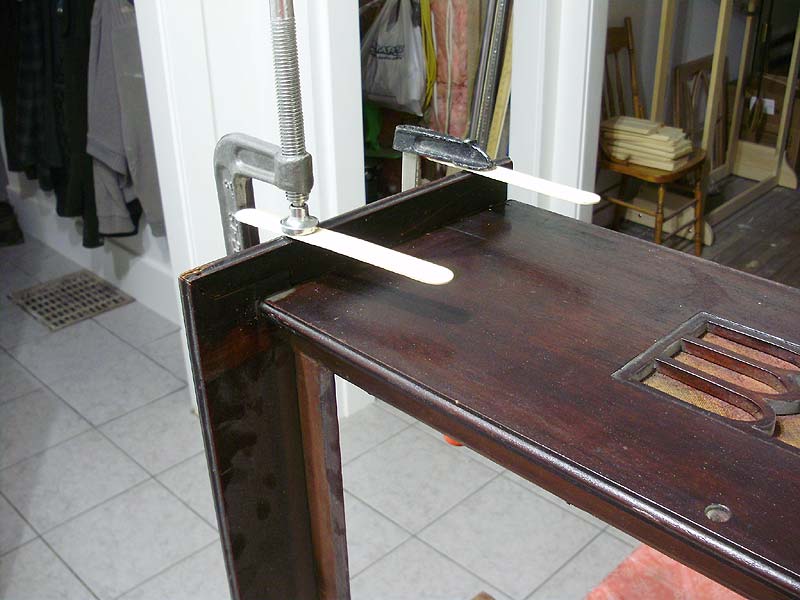 As a side note: I may have done "too much of a good job" as I discovered that the door no longer fits, and I'll need to carefully shave down a small section to make it work smoothly again.
Posted by JC at 12:50 PM